Celebrating the 50th Anniversary of the Moto Guzzi V7, Vanguard honours the brand with their Moto Guzzi V7 Custom 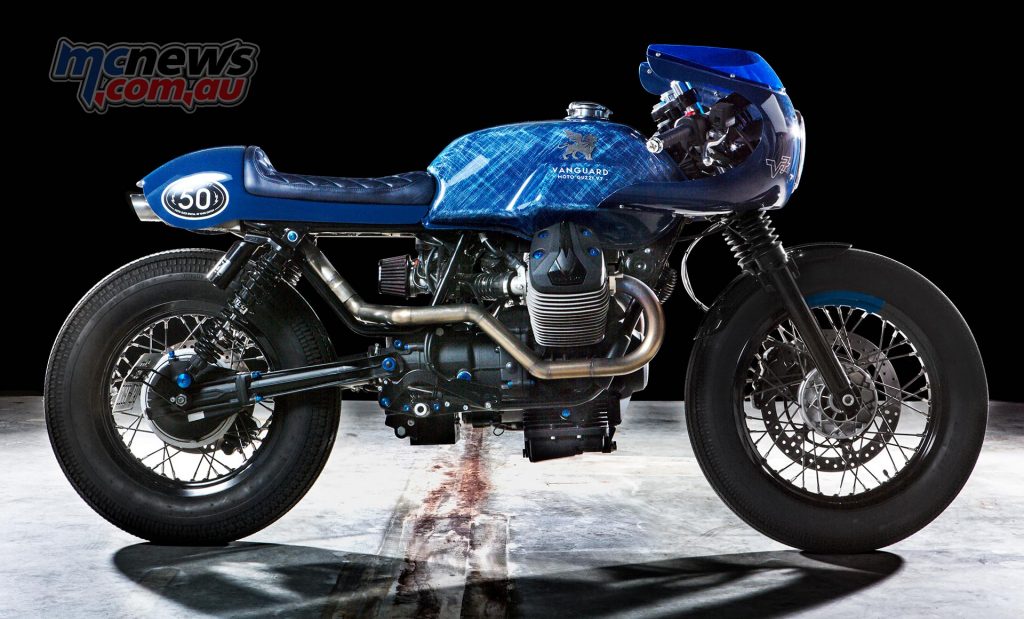 The machine is designed by Gannet Design of Switzerland, the same studio that designed the Vanguard Moto Guzzi V8 last year, which was built by Numbnut Motorcycles.

“In celebration of the 50th anniversary of the Moto Guzzi V7 and new Vanguard jeans, we designed a one-off custom bike which bridges between the first V7 Guzzi model and the Guzzi bike from today. We changed the stance of the bike and created a slight forward leaning angle for more sexy proportions and racer look. 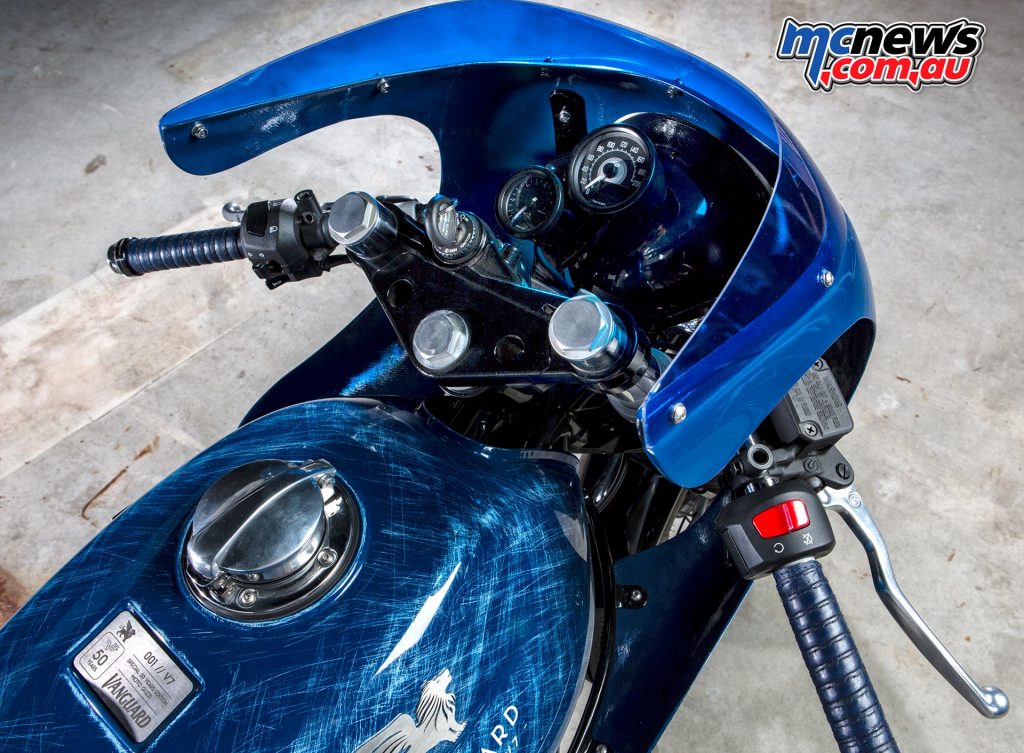 “The design is a bit retro fitted and some details throw you back a couple of decades. Yet the overall design keeps the connection to the contemporary donor bike, which gives a feeling of timeless mix. The custom cafe racer tail section and the “bikini fairing” underlines the racer style with a touch of vintage form language. 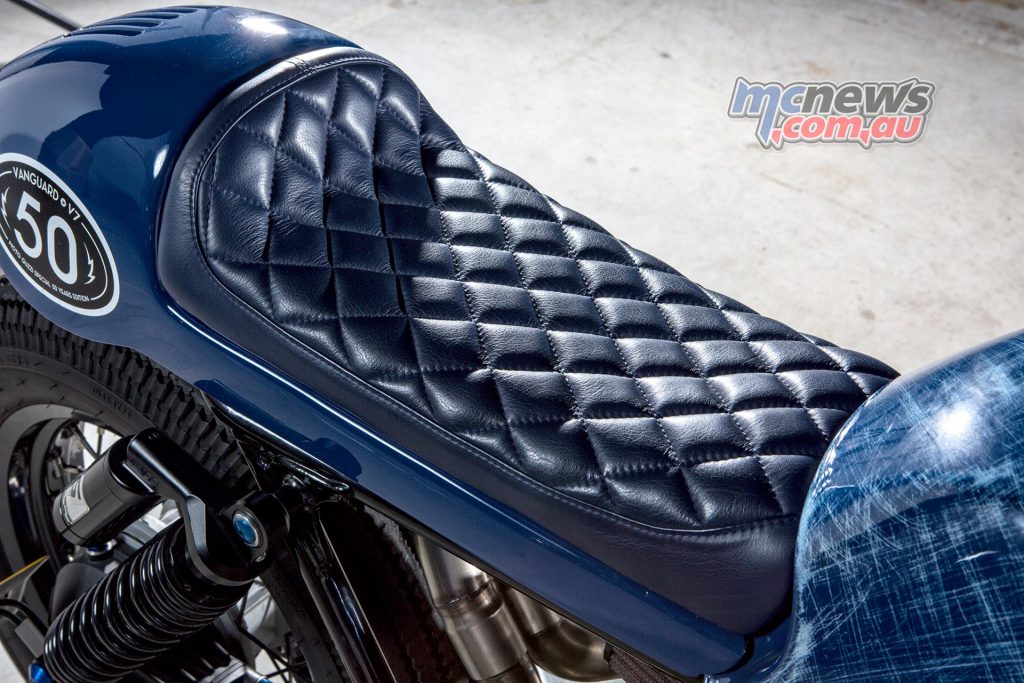 “Furthermore, we integrated key design elements of the new Vanguard V7 jeans into this exceptional bike, such as the special denim blue, quilted leather on the seat matching the leather patch on the jeans and V logo in the rear light, just to mention a few. 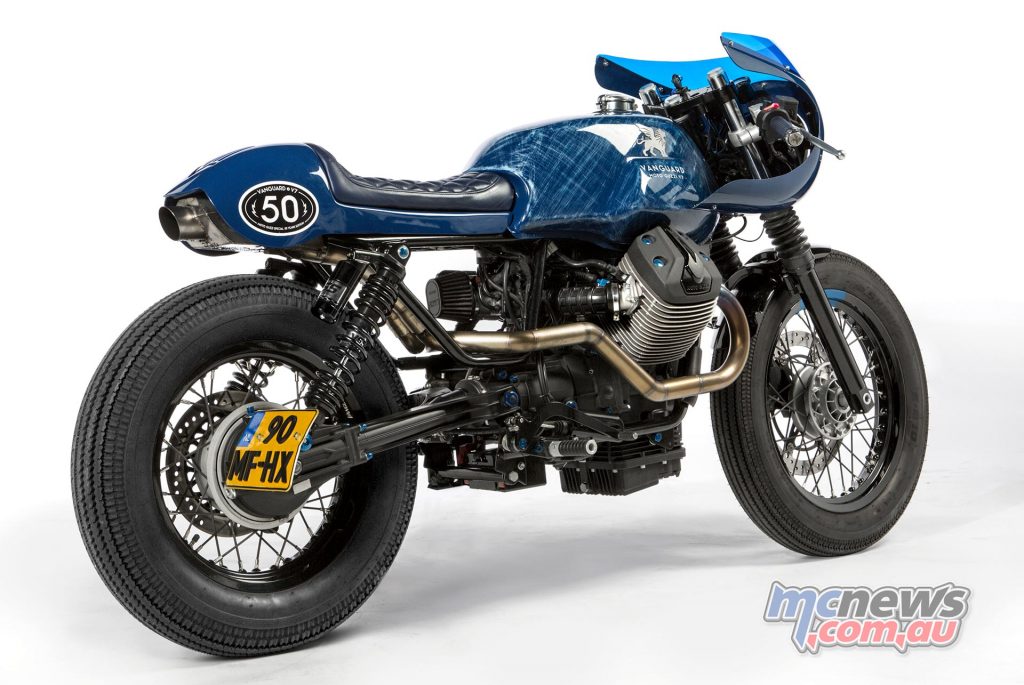 “As a special feature we designed a custom 2-into-1 exhaust system with solid roar and it announces the approach of the head turner even from a distance. The bike got built by the Wrench Kings with great attention to detail. In essence, the Vanguard Guzzi V7 has a super stylish and clean look with a mix of timeless classic and modern elements, and it fits perfectly to Vanguard Clothing.” 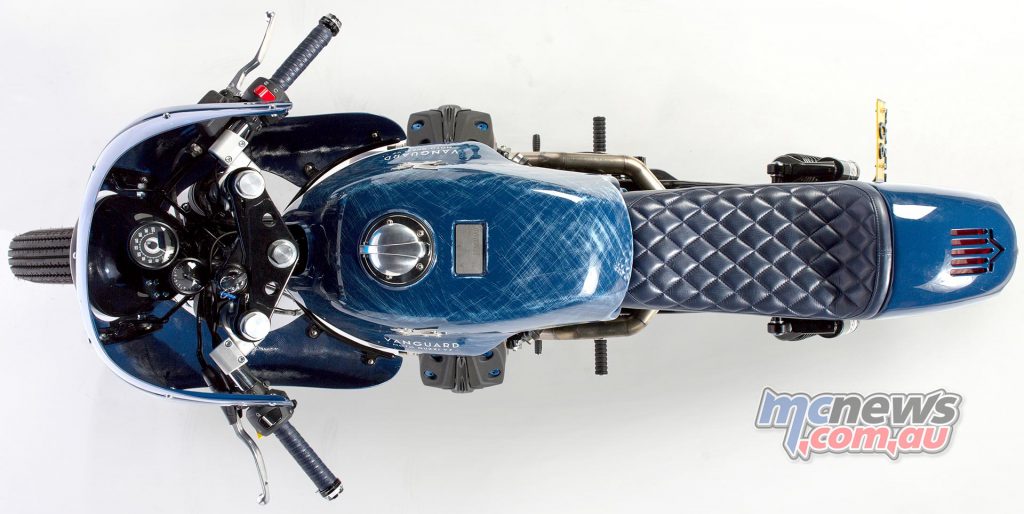 This time, the design was brought to life by the Wrench Kings of Bilthoven. 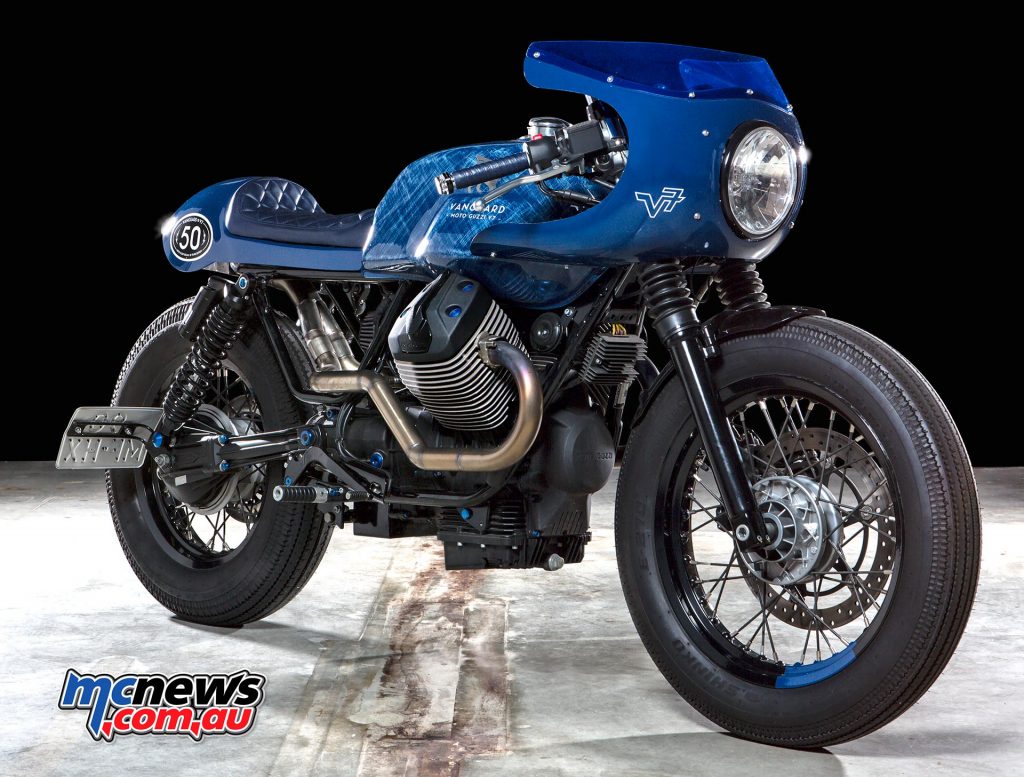 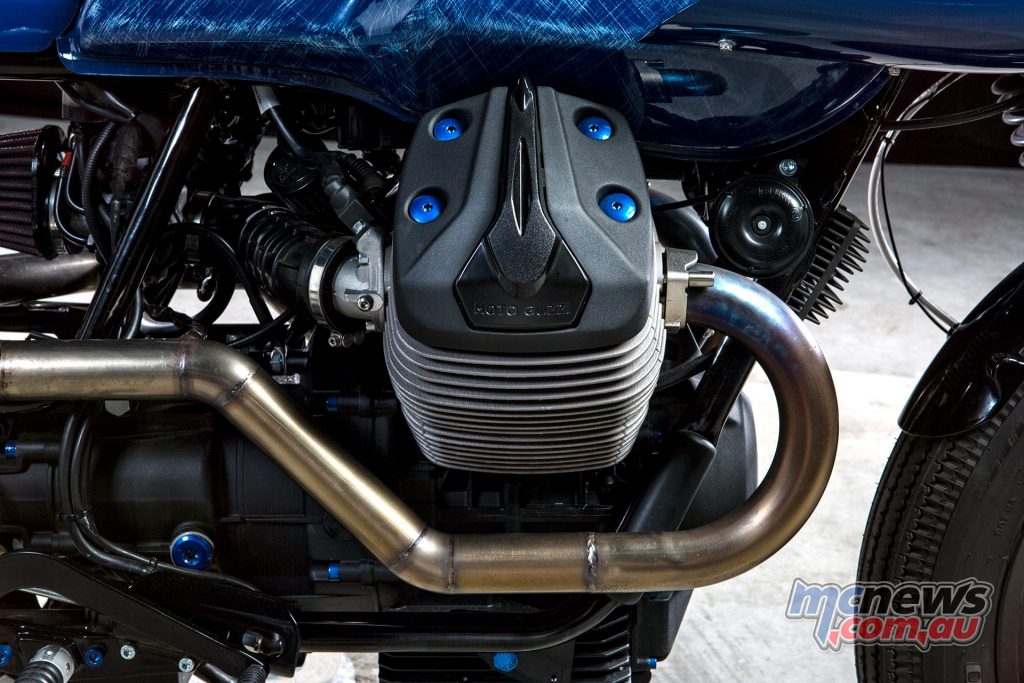 For the presentation of the V7 Custom, pinstripe artist Martijn Krabman designed a one-off custom helmet with a design theme identical to that of the jeans and the bike. 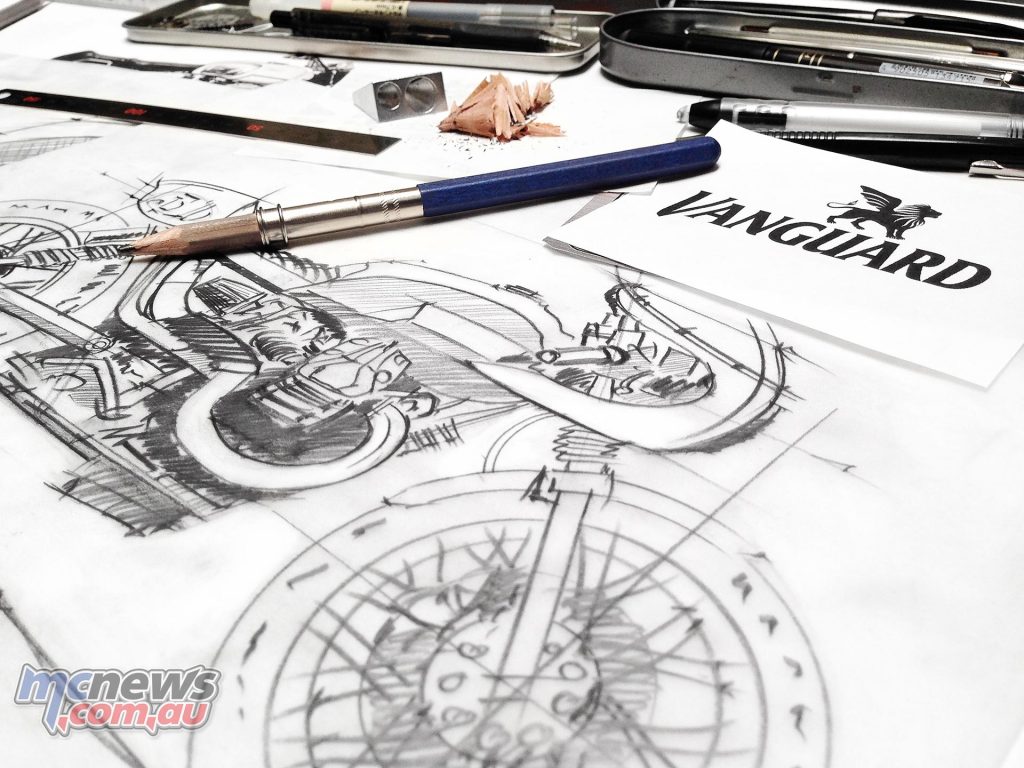 “After we agreed with the design in collaboration with Gannet Design and Vanguard Clothing we started the build. As usual we start the build by cutting the rear sub frame, it gets disassembled, lowered and shortened. Than the fitting part starts with the new front fairing and the new rear end. 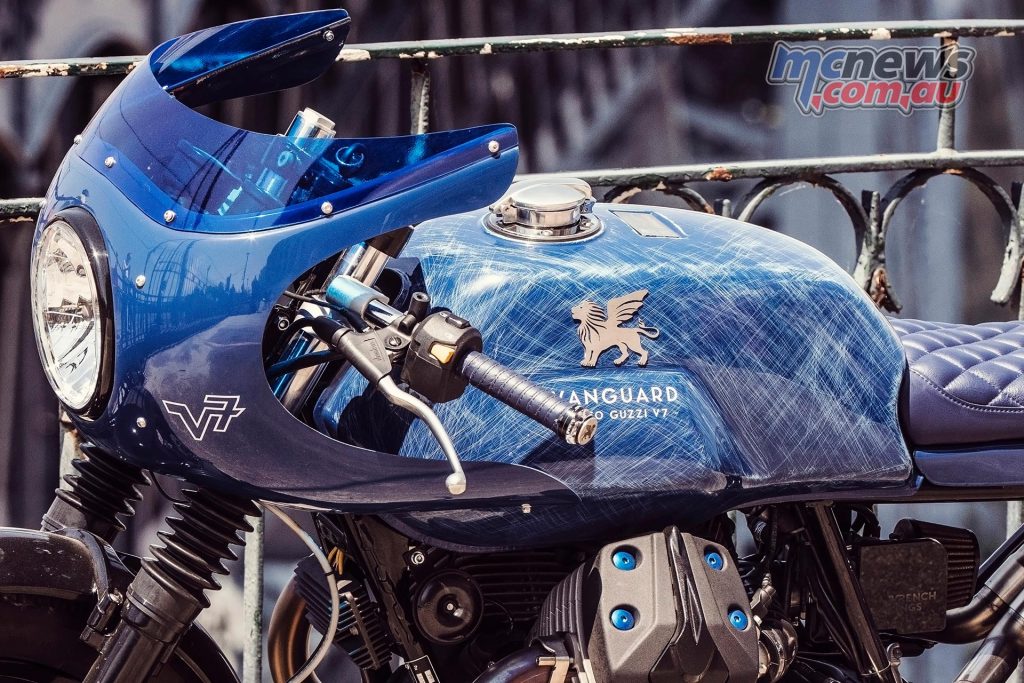 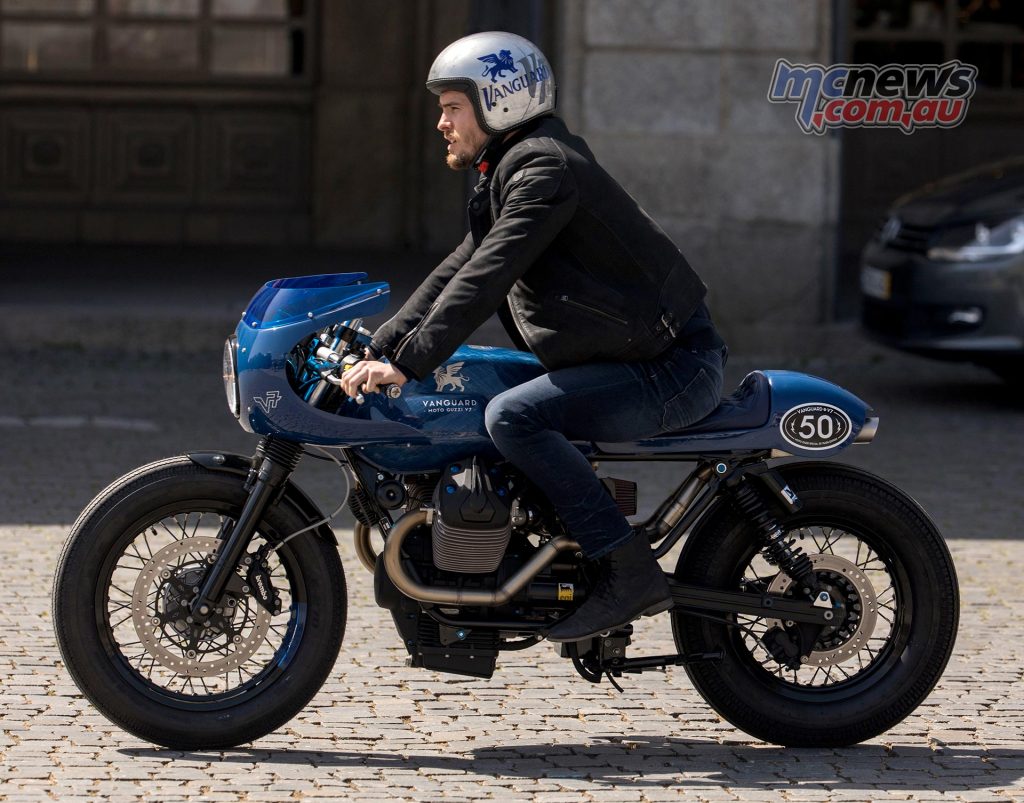 “Most of the bolts are blue anodized in the color of the buttons of the V7 Vanguard Jeans. The pattern of the seat is also processed in the jeans. There are many details and components used in the jeans, which can be found back in the bike.” 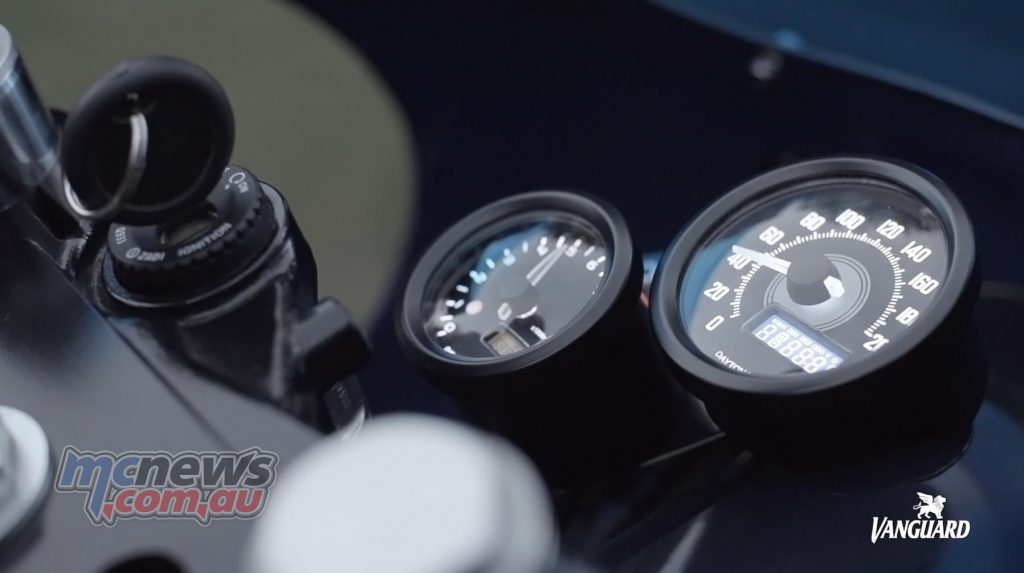 Road TourAfter the press presentation, the Vanguard V7 Custom bike will embark on a promotional tour visiting Vanguard dealers throughout the Netherlands, where customers will be able to see the bike with their own eyes and experience its similarities to the new V7 Anniversary jeans. 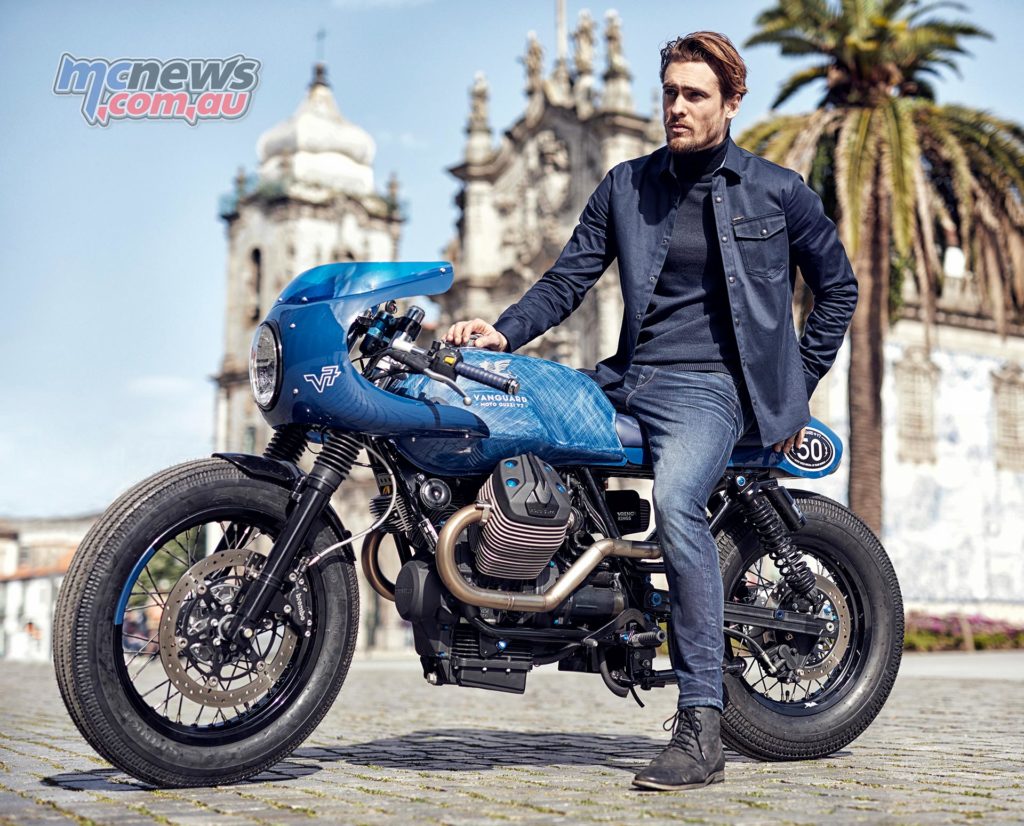 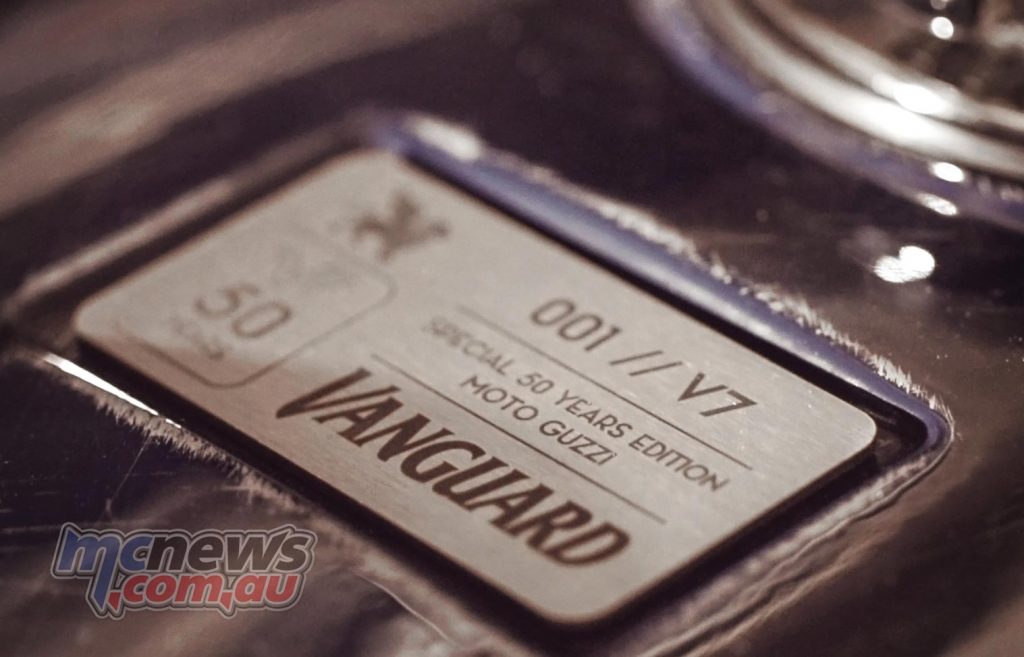 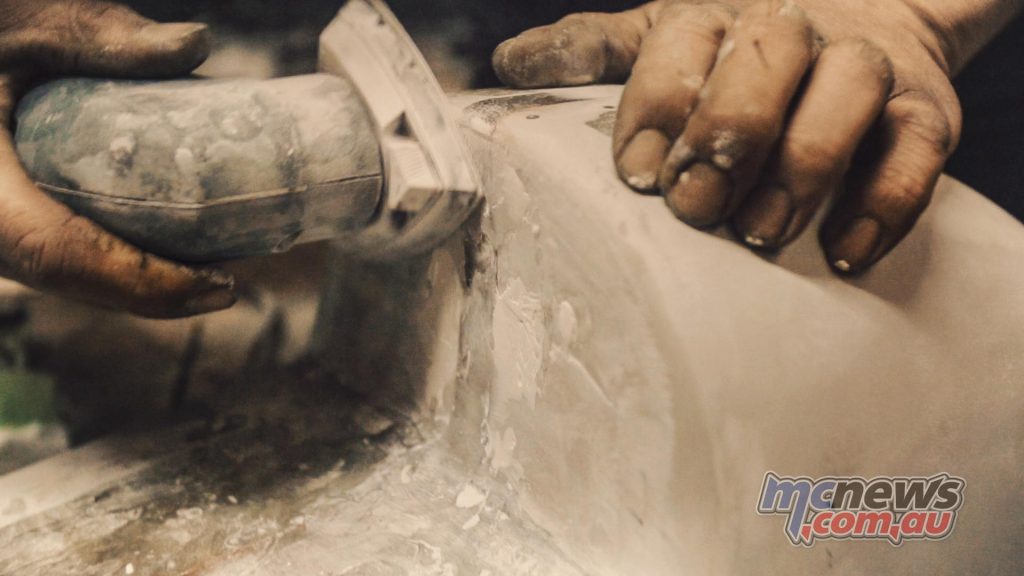 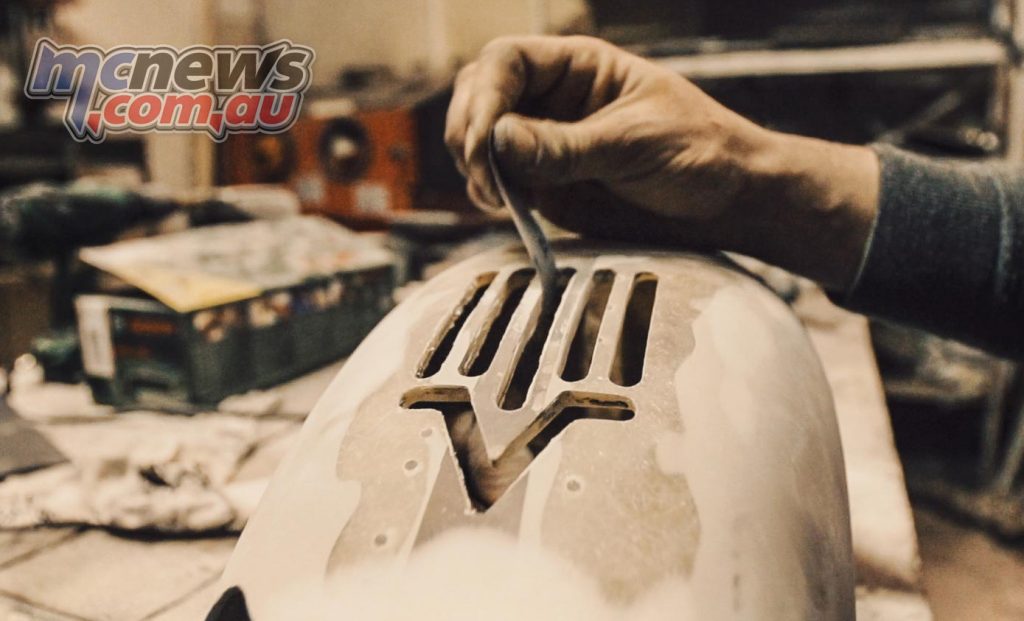 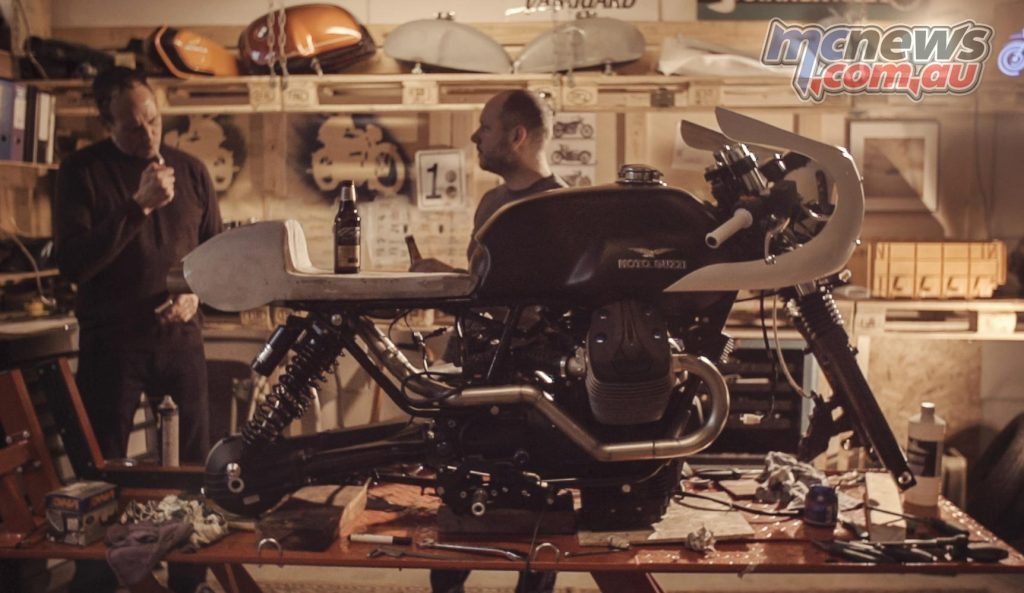 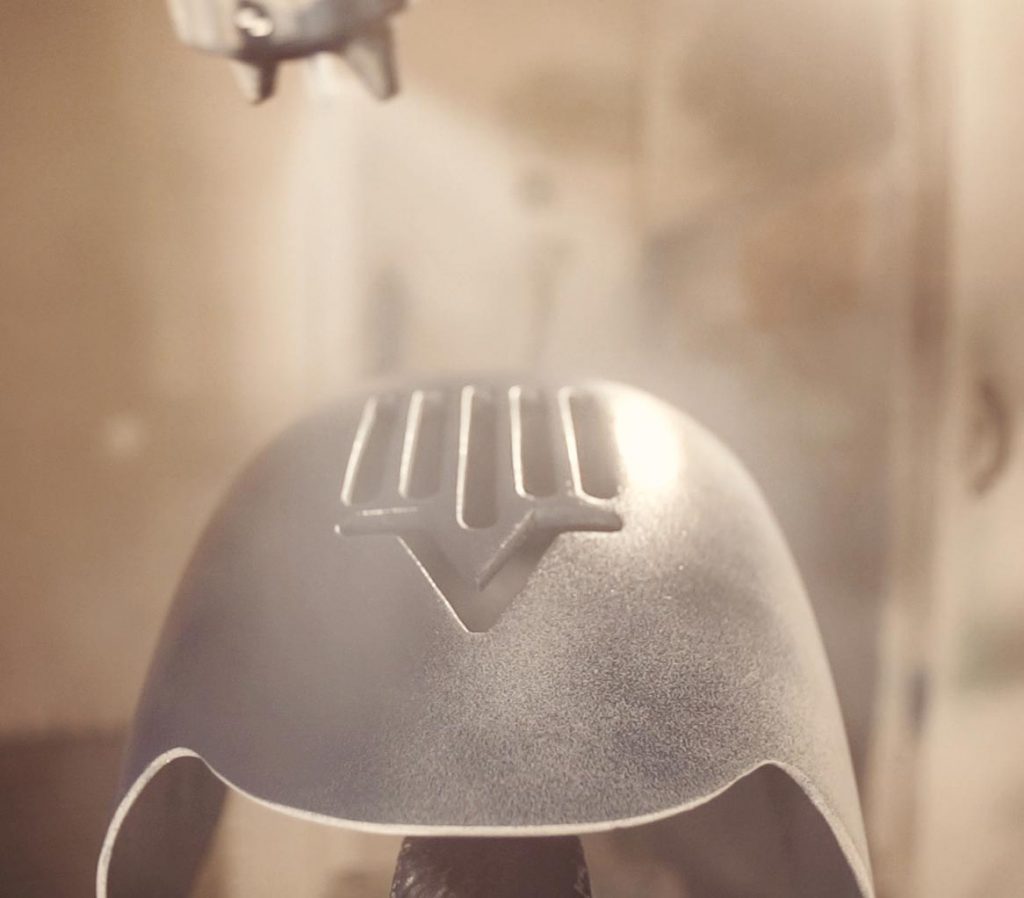 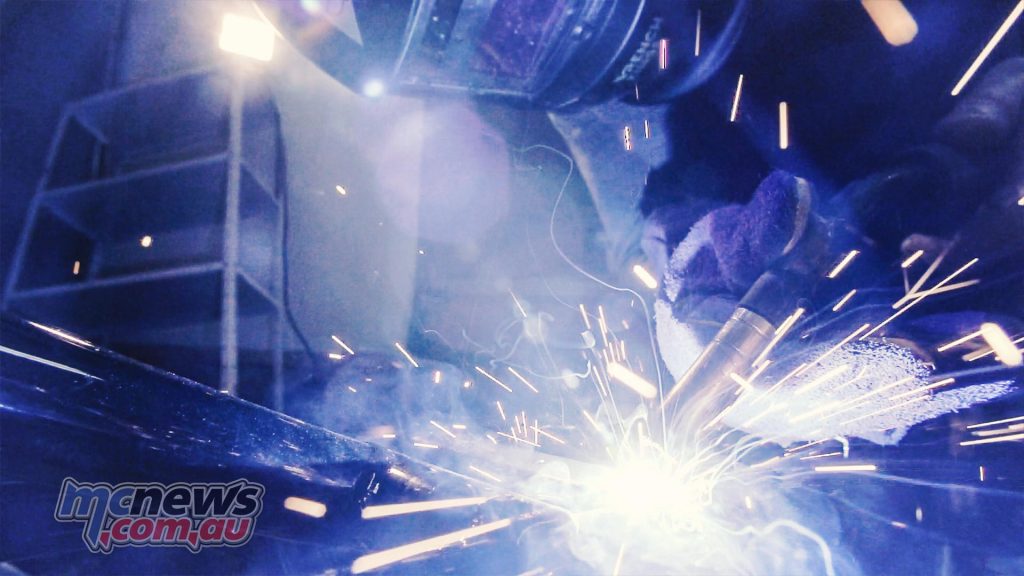 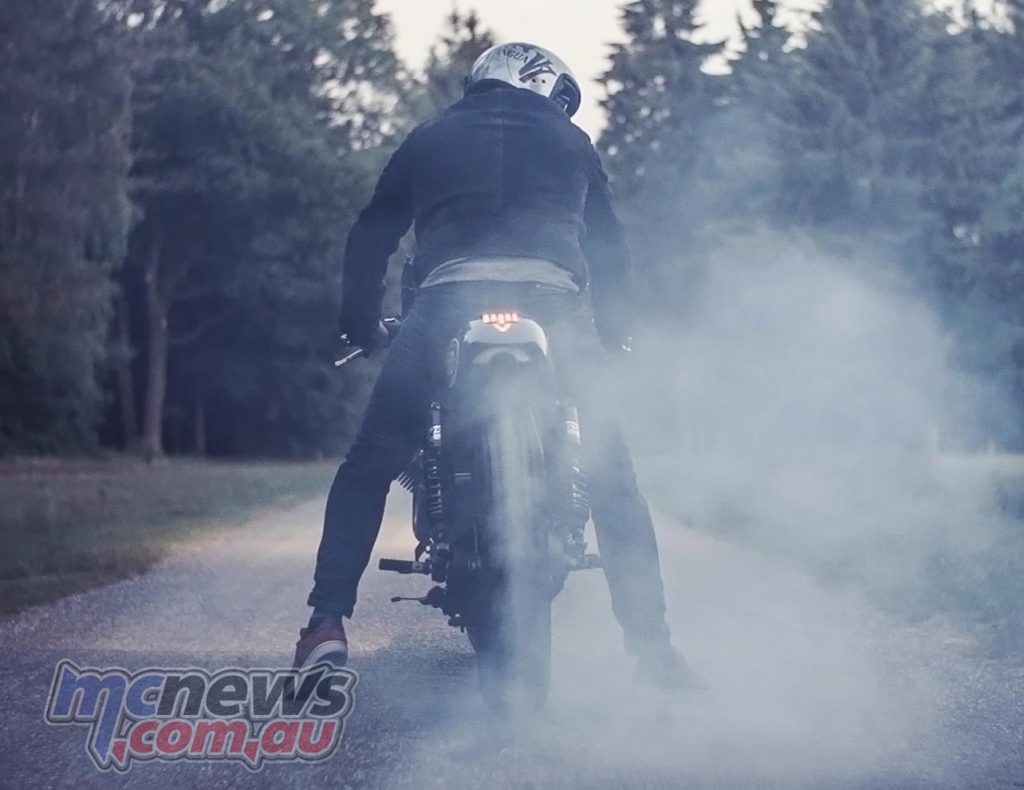 The Vanguard V-series jeans collection consists of several motorcycle-inspired models, each made with craftsmanship, love and attention to detail. All Vanguard V-series jeans are made of comfortable stretch denim and come in numerous, stylish washes. The V8 Racer jeans were introduced in the summer of 2016; the V7 Rider jeans have been in the collection for a while.  Vanguard V7 Anniversary Jeans The limited edition V7 Anniversary Jeans have the fit of the V7 Rider Jeans, but with a skinnier leg. The jeans have a number of special blue features. The denim is double dyed, resulting in an intense blue colour on the outside and a blue inside.