Today saw the first leg of the marathon stage at the 2019 Dakar en route from Arequipa to Moquegua, where the 124 remaining motorcycle riders had an early start to cover the opening 85-kilometre link section before the first part of the 205-kilometre special.  The day was soured by biting cold and humidity in both the city and the mountainous regions. The special consisted of soft dunes with many areas of dusty Fesh-Fesh leading into faster, hard-packed river beds. Riders had to take care to preserve their tyres on the faster sections while not losing too much time to their rivals. A short liaison then brought the riders to the temporary bivouac situated near Moquegua. As the marathon stage rules state, riders receive no outside assistance overnight. All maintenance must be carried out by themselves or fellow competitors.

Nonetheless, Honda’s Ricky Brabec set off like a bat out of hell, marking the best time in the process. After a neutralisation of 54 kilometres, the second part of the special, over 146 kilometres, proved even better for the American, who cruised home with a six-minute advantage over the nearest finisher, dethroning the previous overall leader Pablo Quintanilla with a walloping twenty minute gap. In doing so, Brabec triumphs for the second time in a stage after the victory in 2017 on the La Paz-Uyuni stage. The American takes the head of the overall rankings for the first time in the world’s toughest rally.

“Wow! I needed it. I needed a victory like that! Today I wanted to push because as we had studied yesterday, winning today would be able to help me in tomorrow’s stage. We will have the mass motocross-style start, just like on the motocross starting grids. I’m really very happy to have won the stage with a good margin of time which has helped place me at the top of leader board.”

Following his challenging stage three, Matthias Walkner was the 15th rider to enter the day’s timed special. Immediately pushing hard and making the most of his experience to catch and pass riders ahead of him, the 2018 Dakar Champion maintained his strong pace throughout the day on the fast, treacherous route. A heavy landing from one drop-off caused Walkner to hurt his ankle slightly but the Austrian rider was able to continue to complete the stage and finish as runner-up.

“The day was good for me – the bike is running well and I didn’t crash at all today. I did land quite hard from one jump and thought I might have injured my ankle but it seems to be ok. It’s great here in the bivouac, we are all here together as one team and that feels good. I managed to get some time back in the overall today, so I’ll aim to do the same tomorrow.”

Despite a small crash in the latter half of the special, Toby Price put in a great ride to finish as third fastest, less than a minute down on the hard-charging Walkner. Still nursing his injured wrist, the Australian is looking forward to tomorrow’s slightly shorter stage five.

“That was tough today. It was a long stage and a lot of it was made up of rocky tracks and rivers, they are the worst for my wrist. I did have one get-off along the way but luckily not too bad. I’m not comfortable but it is the way it is and I have to work around it. The goal for the rest of the rally is to keep on doing what I’ve been doing and get the best result possible.”

Fifth away at the start of the stage, Sam Sunderland maintained a strong pace throughout the day, despite losing touch with many of the riders ahead of him and navigating his own way through the fast 405-kilometre stage. The British rider ultimately placed fourth and now also lies fourth in the provisional overall standings.

“The day started off on some wide-open plains, which was nice. But then they had us go through some really technical stuff, which turned out to be really tricky. I dropped the bike at one point in a ravine and had some trouble getting it to point in the right direction again, but apart from that everything was good. I had to focus to keep my pace at the end there, but I’m happy with my result and looking forward to tomorrow.”

Rockstar Energy Husqvarna Factory Racing’s Pablo Quintanilla is holding on to a strong runner-up position in the event’s provisional overall standings.  Four days into the 2019 Dakar and the event in Peru has already proven to be a big challenge for all competitors. Thursday’s stage four was a fast-paced one that featured many tricky navigational challenges.

Racing without the pressure of the opening stages, Yamaha’s Adrien Van Beveren remained fast and consistent from start to finish. Posting the fifth quickest time for the day, the WR450F Rally powered rider is now fifth overall and less than nine-minutes behind the provisional overall leader.

“Everything is going well for me so far and I’m feeling good on the bike. The terrain was not so much to my liking today but I managed to enjoy the stage. The pressure I felt in the opening stages is now gone and I can just focus on my goals for every stage. I’m happy I’ve reached that point and from now on I can just do my own race. Today we rode over some dry river beds and there was a lot of fesh-fesh. The pace was high and I was able to ride well. We’ve made some good work this year with my bike setup and it gives me great confidence in this kind of terrain. I want to continue pushing for some good results in the stages to come.”

Monster Energy Honda Team’s Paulo Gonçalves continues to improve in the 2019 edition of the Dakar after a spleen operation just a month ago. The Portuguese rider finished with the sixth fastest time of the day and lies in eighth in the general standings.

“Yeah, I’m quite happy. We have done four stages and 40% of the 2019 Dakar and I have made to the marathon stage well, in good health and in a good position. Today I pressed hard until the refuelling through the river area which had plenty of stones. I was very careful. I’m happy because every day I feel better and closer to full fitness. Now let’s try to fight the remaining days of the race.”

Kevin Benavides occupied ninth place at the finish, one spot behind team-mate Nacho Cornejo, with the Argentine now in sixth place overall.

“It was an important stage really. We went through a lot of terrain types, hard track, stony areas and even some fesh-fesh. It was fine, but I dropped a bit of time trying to find a waypoint and it didn’t go quite as I had planned. It was difficult to catch other riders because they raised a lot of dust and I preferred to take care of the bike and be able to push later.”

Pablo Quintanilla battled through the day’s tough navigation to post the 14th best time on the special stage but is currently second in the provisional overall standings, two-minutes and 19-seconds behind new provisional overall leader, Ricky Brabec.

“It was a really hard stage today. The first part had some tricky navigation in the fesh-fesh. In the last waypoint before the refuelling I made a mistake but was able to get back on the tracks quickly. Then after the neutralisation point the tracks were really hard. There was a long dry river bed with many stones and it was hard to make some time. I knew from the beginning of the stage that it was possible to get caught by other riders and when it happened I just tried to ride with them. Overall, I’m happy to have finished the first part of the marathon stage without any problems. After some rest tonight, I’m hoping to be back stronger for the second part of the marathon stage tomorrow.”

After winning Wednesday’s stage three, Xavier de Soultrait had the demanding task of opening the stage for all following competitors and earned a 15th place result on stage four. Xavier is now ninth and the second Yamaha powered rider inside the top 10 in the provisional overall standings.

“It was a challenging day for me. Today I led the way for most of the special, opening the tracks with a small group of riders. At one point the others got lost and I was left alone opening the tracks in the dunes. I’m really confident with my navigation and I was happy not to make any big mistakes. When you’re leading the way in these conditions, it’s impossible not to make errors and I made a few of them today, which cost me some time. This is always part of the Dakar, we take it and move on. I have a very good starting position for tomorrow and that gives me extra motivation to push. Tomorrow we will be starting in rows of 10 riders every five minutes. I will be in the second row so I am hoping I can catch the leading group and ride with them. The goal now is to reach the Rest Day on Saturday with a good position in the overall.”

Experienced Dakar racer Laia Sanz knows the importance of caring for your bike on the first half of the marathon stage. Putting in another solid ride, Laia once again finished the day inside the top-20 as 19th fastest.

“It was a long day today but I am happy with how it went. It’s important to arrive here at the bivouac with the bike in one piece on the marathon stage and I managed to finish without any problems. The day was quite hard with lots of dust at first and then later on the river bed was really tough. I’m hoping for another good day tomorrow.”

Queensland’s Rodney Faggotter was forced to retire with technical problems earlier in the rally.

Competitors spend the night at Moquegua camp where they can rest and prepare the second leg of the marathon stage. The riders will, however, be left to their own devices as no outside mechanical assistance is permitted. Instead any technical help will have to wait until the close of tomorrow’s stage back at the Arequipa bivouac. The fifth stage will add a total of 776 kilometres to the 1109 disputed so far and will include 345 kilometres against the clock. 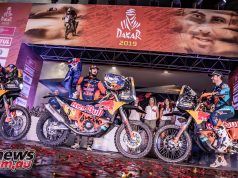 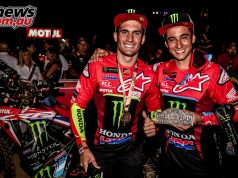 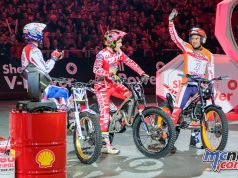