My first few kilometres on Ducati’s new Streetfighter were not all that enjoyable.

Upon thumbing the starter outside the Chifley Hotel near Eastern Creek Raceway, the big twin reluctantly fired into life. But with politically correct standard pipes the charismatic Ducati boom was missing and the machine settled down to a fairly subdued fast idle, rather than a raucous thunder.

Pulling away from the kerb I found the riding position awkward. The first few corners were somewhat of an exercise in frustration as the forks were so harsh they felt as though they were full of treacle.

A couple of hours later, however, and after a run through the Blue Mountains, I am pleased to say both mine and the Streetfighter’s attitude had changed markedly.

It had gone from what was first an unwieldy backroom brawler to something more akin to a purveyor of fine martial arts. Chuck Norris had TKO’d Mike Tyson.

As the kilometres mounted the forks started to loosen up. The stiction in the top shelf inverted Ohlins forks early on in my ride really was quite horrendous.

50 kilometres later they really started to show their potential and after another 50 they started to work the way that quality forks should. The binding went away completely and the handling became more predictable.

The Streetfighter no longer wanted to fight me, instead it started to work with me and a bond was forming.

Likewise the engine was revealing a pleasant side to its nature.

The engine internals are lifted from the previous 1098 Superbike but with the advantages of the vacuural casting advances realised in the latest 1198.

The cylinder head is also straight from the 1098 Superbike parts catalogue complete with a pair of 42mm intake valves that inhale through each cylinder’s oval throttle body before expelling their burnt gases through two 34mm exhaust valves.

The only significant change from the Superbike is the use of different airbox ducting mandated by the naked layout of the Streetfighter.

Ducati boast that overall power is down only five neddies compared to the 1098 Superbike. A claimed 155 horsepower (114kW) and 115Nm of torque both arrive at 9500rpm. The engine will rev 1000rpm higher, which gives you a reasonable cushion of over-rev if you want to save a gear change between corners.

The gearbox is identical to the Superbike and, like the suspension, also improved as time progressed.

On the road I must say the engine does not feel quite as strong as the figures suggest. The test bikes were still quite tight, however, and no doubt will pull much harder with a few thousand kilometres on the odometer.

A visit to Eastern Creek Raceway in the afternoon showed that there was certainly no shortage of herbs at the top end with speeds on the main straight nudging 240km/h. The Streetfighter still pulls hard above 200km/h and runs the same 15/38 gearing as the Superbike.

If your riding doesn’t generally take in fast racetracks a switch to a larger rear sprocket, thereby shortening the overall gearing, would certainly make the Streetfighter a lot sprightlier around town or in the hills.

However, the Streetfighter mill is to my mind the sweetest four-valve per cylinder Ducati twin yet produced. It is much smoother at every point in the rev range than the Superbike engine it shares many of its part numbers with. For a bike that is predominantly going to be used on the street, the Streetfighter engine is clearly a much better option than the distinctly more gruff 1098 or 1198 Superbikes.

The suspension is also much more suited to street shenanigans. Mid corner bumps that would threaten to bounce you off into the bushes on an 1198 are dealt with nicely by the Streetfighter. A 35mm longer swingarm and more raked out front end no doubt also help to endow the Streetfighter with the manners that its Superbike brethren missed out on. In contrast to its name the bike does not fight the rider at all and is much less brutal in every respect than its sharply dressed big brother.

Of course the steering isn’t quite as quick as the Superbike, a side effect of the more upright riding position that necessitates changes to the chassis geometry to ensure stability. A steering damper is fitted as comforting back up but the Streetfighter hardly requires it. If carrying a pillion or pumping ten-tenths at the racetrack however that might be a different story and the damper may then prove its worth.

Ride height is adjustable independent of preload and whether fitted with Showa or Ohlins components, there is a wide scope of both rebound and compression damping adjustments. Due to the upright riding position the front end never feels quite as secure as a sportsbike, particularly on corner entry. I would be adding a little more ride height at the rear while firming up the front to try and tune that trait out a little before I would be game to explore the limits of front tyre adhesion.

The Brembo monoblock calipers up front work brilliantly once warmed, while the rear is completely devoid of any feel whatsoever, just like pretty much every other Ducati.

Even when the 330mm rotors and four-piston calipers are used to their absolute maximum the Streetfighter remains composed and never threatens to get out of shape. Buell should buy one to find out how a bike should behave under brakes…

A tad of controlled clutch slip helps to keep the rear in check. There is no slipper clutch however, so I am afraid the slipper clutch on this baby is courtesy of the fingers on your left hand. Likewise there is no ABS fitted to the Streetfighter.

At a standstill the bar ergonomics seem similar to an early Buell or Cagiva Xtra Raptor. On the move the top of the mirror housings can hardly be seen let alone the actual mirror lenses. Seeing anything behind you requires the rider performing something akin to yoga’s downward dog.

Everything else about the ergonomics seemed perfectly fine. The bar placement eventually makes sense with only a little tightening of the stomach muscles required for the weight to be taken off your wrists. The peg position is amicable enough and the seat proved to be very posterior friendly. Amazingly I never had a problem with any wind buffeting either on the road or on the track. It almost sounds unbelievable but I swear the airflow over the rider seems cleaner than on its fully faired siblings. I am confident you could tour on this bike without a problem. I am 178cm tall and during the test was wearing a Vemar helmet.

The levers are adjustable for reach and nicely finished while the all new switchgear is intuitive. The comprehensive instrumentation will prove familiar to Ducatisti as it is lifted straight from the 1098 Superbike parts bin. 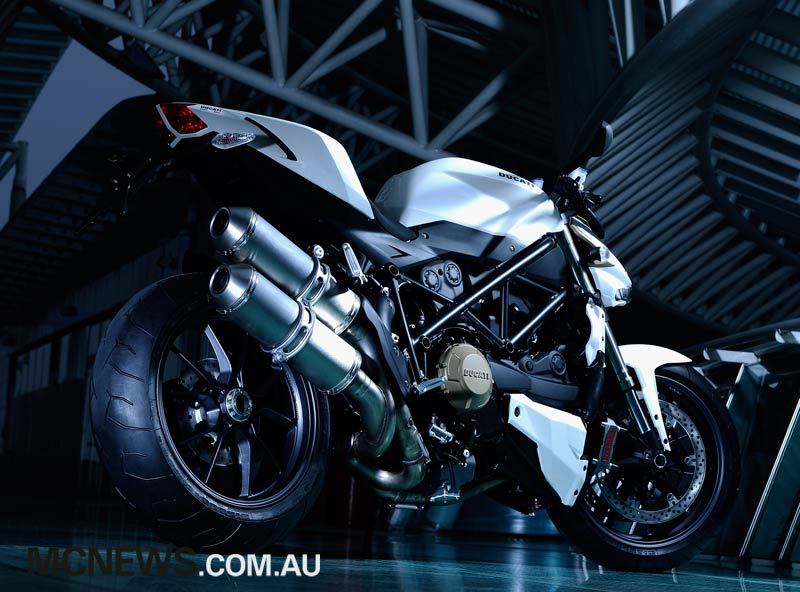 The latter of the two scores Ohlins suspension in place of the standard model’s Showa equipment, a sprinkling of carbon-fibre, lighter rims and Ducati’s fantastic eight-stage traction control system that first debuted on the $55,000 1098R and was later improved upon in the latest 1198 S. We have covered the traction control system in detail before so won’t bore you with the full run down. Just be comfortable in the fact that it is the smartest and most unobtrusive system on the market and in its latest guise even smarter than the system seen on the 1098R.

The DTC combines with the DDA data logging system to provide a fettler with endless hours of fun examining in fine detail every aspect of the bike’s and rider’s performance. If that’s what floats your boat…

Ducati claim a dry weight of 169kg for the Streetfighter with the S model tipping the scales two kilograms less thanks to its forged Marchesini rims.

Aesthetically the Streetfighter is a winner. It treads a fine line between the genres of a nakedbike blurring into somewhat of a cafe racer given a modern touch. The punters at the huge EICMA Show in Milan certainly warmed to it as it was judged by punters as ‘most beautiful bike in show’. Certainly the pictures don’t do it justice and it has to be seen in the flesh to be appreciated.

Something that few will appreciate however is its price. The Streetfighter will set you back around $26,000 while the S model will cost you over $32,000 by the time government charges have been applied. Then of course you have to add the extra $3159 for the Termi pipes to really allow the Streetfighter to clear its lungs and excite you with that trademark Ducati sound.

That’s a mighty big ask but what you do get for that significant amount of coin is the best four-valve Ducati Streetbike ever made.

I just wish its faired Superbike brethren were half as nice to live with on the street. The Streetfighter’s manners combined with the Superbike’s striking looks really would be a marriage made in heaven.

As it stands though the Streetfighter raises the stakes in the nakedbike market in most measures of outright performance and technology. Combine that performance with the Ducati soundtrack and no doubt there will be plenty of well heeled buyers willing to stump up the extra coin over something like Honda’s CB1000R, Triumph’s Speed Triple or BMW’s even more powerful K1300R. Town riders that crave big bottom end urge may prefer Ducati’s Monster 1100 as the two-valve engine still has by far the biggest balls at low rpm. But there is no way a Monster will stick with a Streetfighter in the hills or at the track. One thing is for sure, buyers in the nakedbike market are certainly spoiled for choice.