Ducati Team presented at the Audi Forum in Munich

The Ducati Team for the 2014 MotoGP World Championship was presented today in an original location in Germany. Confirming the close ties and synergy between the Bologna-based manufacturer and the Audi Group, the official presentation of the Ducati Team was held at the Audi Forum inside Munich Airport.

In the presence of a carbon black Ducati Desmosedici GP14, which had just returned to Europe following the recent tests in Malaysia and Australia, Claudio Domenicali (Ducati Motor Holding CEO), personally introduced the team, represented on the stage by Luigi Dall’Igna (Ducati Corse General Manager), by Paolo Ciabatti (Ducati Corse Sporting Director) and by the two riders, Andrea Dovizioso and Cal Crutchlow. The sporting activities for the new season and the technical details of the new Desmosedici GP14 were illustrated, in the light of the recent tests and the decision to take part in the championship in Open configuration (as announced last week in Sepang).

“As I have said recently” declared Claudio Domenicali at the start of the press conference, “in MotoGP we also want to find again those values that have led us to obtain successful results in the past. We are ready for the new MotoGP season, firmly convinced that the enthusiasm, the passion and the technical competence of our team, together with the support of our sponsors and partners and all of our ‘tifosi’, will enable us to tackle this commitment with determination. Cal and Andrea are very talented riders, and Luigi Dall’Igna will surely be able to manage the resources available in the best possible way. The new technical and sporting decisions that the company has decided to take will allow us to compete once again with the spirit that has always characterized the women and the men who work in Ducati, capable of producing dream bikes that are in the forefront for technology and design.”

Claudio Domenicali then invited onto the stage Dr. Ulrich Hackenberg, Member of the Board of Audi AG for Technical Development. The German manager underlined that Audi and Ducati share the same passion for racing, have many values in common and both represent excellence in the field of technology and innovation. Following this introduction, as a true enthusiast and fan of Ducati, Dr. Hackenberg passed on his best wishes to the Ducati Team on behalf of the entire group.

Then it was the turn of Luigi Dall’Igna, Ducati Corse General Manager, who presented the Desmosedici GP14. “Coming to work in Ducati Corse is probably the most important challenge of my life: working in MotoGP as General Manager for one of the most famous and prestigious manufacturers in the world – Ducati – is an important achievement but also a great responsibility. I am very proud of the choice that I have made and just as motivated by the results of testing at Sepang and Phillip Island. At the moment the most important thing is to continue with the development of the bike, and the choices that we have made will allow us to move forward and improve. We are satisfied with the lap times in the last tests, but also the consistency of the times, which are backed up by the riders’ comments. Ducati has significantly reduced the gap to its rivals and we are confident we can make further steps forward during the season.”

Paolo Ciabatti, Ducati Corse Sporting Director, as well as MotoGP Project Manager, declared: “After three difficult seasons without any significant results, the changes in organization that we have made in our structure for this season are producing their first results. The entire Ducati Team is very motivated and united, and the encouraging results we obtained in the last tests give us hope for the championship that is about the start. We know that we still need to do a lot of work to further reduce the gap separating us from the frontrunners, but we are convinced we have made the right decisions and so we are very optimistic”.

For Andrea Dovizioso 2014 will be the second season in MotoGP with the Ducati Team. After an eighth place last season, the 27 year-old Italian will be hoping for better luck this time around and first impressions from the tests are positive. “I am very happy with the way the pre-season tests went because we managed to improve more than expected, and this gives me a lot of confidence. Thanks to the work of Gigi, and by making a few balance changes, the bike is now more manageable, goes better and we succeeded in doing the times we did in the recent tests. Losail is a very difficult track but I think we will be quite competitive, even though we still have a few doubts about our effective race pace. In any case, we have reduced the gap from last year and today we are much more competitive. We still have to improve to arrive at the positions where we want to be, but I think that in the first race we will manage to start close to the front.”

The 2014 season will be Cal Crutchlow’s fourth year in MotoGP, and the first as factory rider for the Ducati Team. The occasion initiates an exciting new chapter in the career of the British rider. “I’m excited about the season ahead and I think Qatar is going to be good for us. The team have been working well, and especially in Australia I felt we were doing a good job. We still have some things to try with the bike, but I’m excited to start the season in what I feel is not too bad a shape. I think we will be at a disadvantage because we never tested there, but we’ll still be giving 100% in the race.”

The Ducati Team will be on track at Losail (Qatar) starting from Thursday 20 March, with the first practice sessions, while the race is scheduled for the evening of Sunday 23 March at 10 pm. 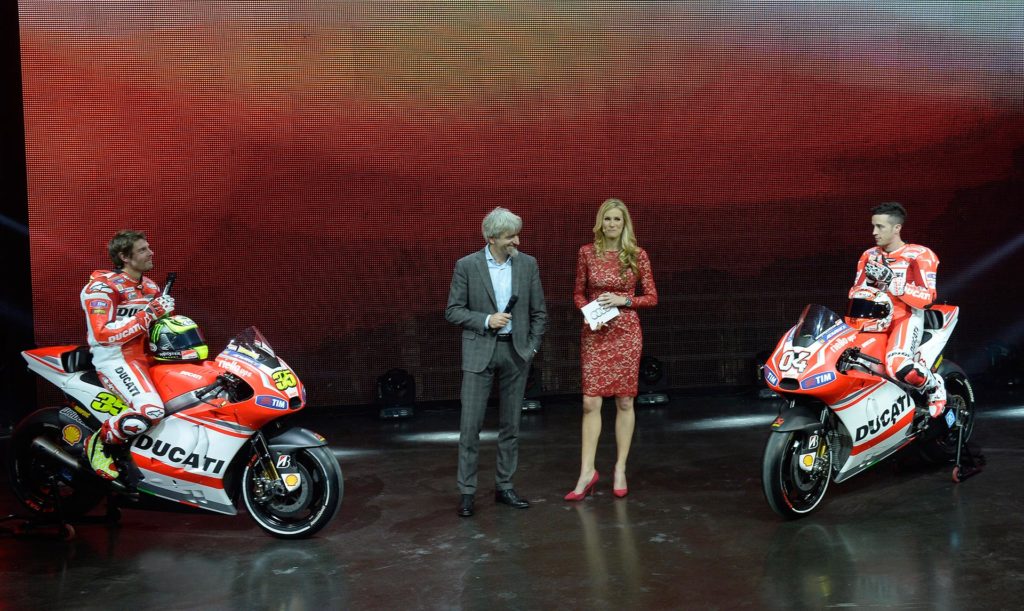