Michael Dunlop stormed to Superbike pole position on the Motorrad/Hawk BMW in blistering sunshine during the final qualifying session of the Vauxhall International North West 200 overnight.

The Ballymoney rider saved his best to last as he snatched the top spot right at the end of the final session with a new unofficial lap record of 122.274mph in 4 minutes 24.095 seconds.

“We are getting there, slowly but surely.” the 25 year old said afterwards with typical understatement.

Dunlop’s ability to make the switch to BMW from the Honda that he steered to glory in the 2013 Superbike TT has been under the spotlight but the double North West winner answered some of the questions by also grabbing pole in the Superstock class alongside his Superbike challenge.

“The BMW feels really good and I have to say that I really like it.” Michael enthused afterwards.

“But we still haven’t had enough time with this bike. This is a new German engine that is a lot faster than the BSB one I’ve tested and we are making lots of changes to the chassis. I still think that there is a lot more in this bike.”

Dunlop’s comments were in stark contrast to the post qualifying remarks of second spot man, Michael Rutter, who was just under a second slower than the local favourite on his Batham’s BMW.

“I thought that I had done the perfect lap today and I am disappointed not to get pole.” the 13 times NW winner said.

“I got a tow from William Dunlop on the Suzuki but when I pulled out of the slipstream we just weren’t quick enough. It is a good bike but it is only a standard engine.”

Ten times North West winner Alastair Seeley had a troubled final qualifying on his way to taking the final spot on the front row of the grid. He set his fastest lap on his third lap but on the next circuit the engine of his Mar-Train ZX10 Kawasaki expired.

“I was reasonably happy with things before the engine went bang.” the current Superbike lap record holder said after the session.

“The handling is really good and the track is in great condition in this warm weather. I am still feeling confident-but not over confident!”

After a week of practice in perfect conditions Saturday’s Vauxhall International North West 200 is set for some titanic battles in every class but all eyes will be on the premier Superbike events. With both big bike races being run over seven rather six laps, local fans will be relishing the prospect of watching what is sure to be massive battles for Superbike glory.

Supercharged Alastair Seeley took a brilliant double in the Ballymoney Borough council Supersport and Pirtek Superstock events at the start of racing at the Vauxhall International North West 200 this evening.

The ‘Wee Wizard’ survived being caught up in a first lap crash at York hairpin that left him languishing in 16th to come through and win the opening race of the night on his Mar-Train Yamaha R6.

The 34 year old completed his double by coming out on top in the Superstock race on the Mar-Train ZX 10 Kawasaki after a scintillating last lap battle with Michael Rutter and Michael Dunlop.

“It is really nice to get my 12th win at the North West.” Seeley smiled as the celebrations began.

The diminutive Carrickfergus rider attributed his success to his ability to find the best braking points.

“I’ve been coming here for ten years and I’ve got lots of experience at working out the very latest braking spots here, especially at Juniper Hill chicane where it really matters. I’ve been working on that all day.” he said.

Seeley needed all of those skills to make up ground in the Supersport race after he had to do a U turn at York corner when Lee Johnston crashed on the opening lap.

“I was 16th after that but I chased the pack down and slowly reeled the pack in.” he explained.

“I made most of my time up on the brakes and got into the lead on the 5th lap.”

A new lap record of 116.606mph on lap four helped him move past Brookes and then into the lead on the fifth lap but he was was pushed all the way by Guy Martin on the Tyco Suzuki on the Coast road on the final lap.

But the Lincolnshire rider lost out in an encounter with a backmarker on the approach to Black Hill on the last lap, leaving the Carrick rider free to take the chequered flag.  After leading the race early on, Josh Brookes rounded out the podium with less than two seconds covering the top three riders.

Black Hill was also the crucial point in the Superstock race, which Seeley had led in the opening stages on the Kawasaki.

On the penultimate lap he was caught and passed by first Michael Rutter (Batham’s BMW) and then Michael Dunlop (MD Racing BMW).

Dunlop seemed to have the race at his fingertips leading into Metropole but once again Seeley made his crucial move on the Coast road.

“Michael’s bike was getting out of shape after Church and I got past in the run up to Black Hill.” Seeley explained as he took the win that moved him into fourth place in the all-time North West winners’ list.

Seeley may have won the race but it was Austrian visitor Horst Saiger who set a new lap record on his Saiger Racing.com Kawasaki ZX10 at 121.214mph. He finished fifth in the race behind Martin Jessopp on the Riders BMW.

Lee Johnston went from zero to hero after he won the Vauxhall Supertwins race following his earlier Supersport crash.

Johnston had been on pole for the twins race on the Pirtek Kawasaki and he hunted down early leader Ivan Lintin (McKinstry Kawasaki) and passed him on the final lap at Juniper Hill.

“It is great to get my first road North West win and my first road race win, especially after the way the night had begun with the crash.” Johnston smiled.

A huge crowd enjoyed an evening of sunshine and brilliant high speed racing on the 8.9 mile Triangle course as Keith Amor made it a full house of new lap records by raising the Supertwins speed to 108.644mph before his SGS KMR Kawasaki expired on the last lap. 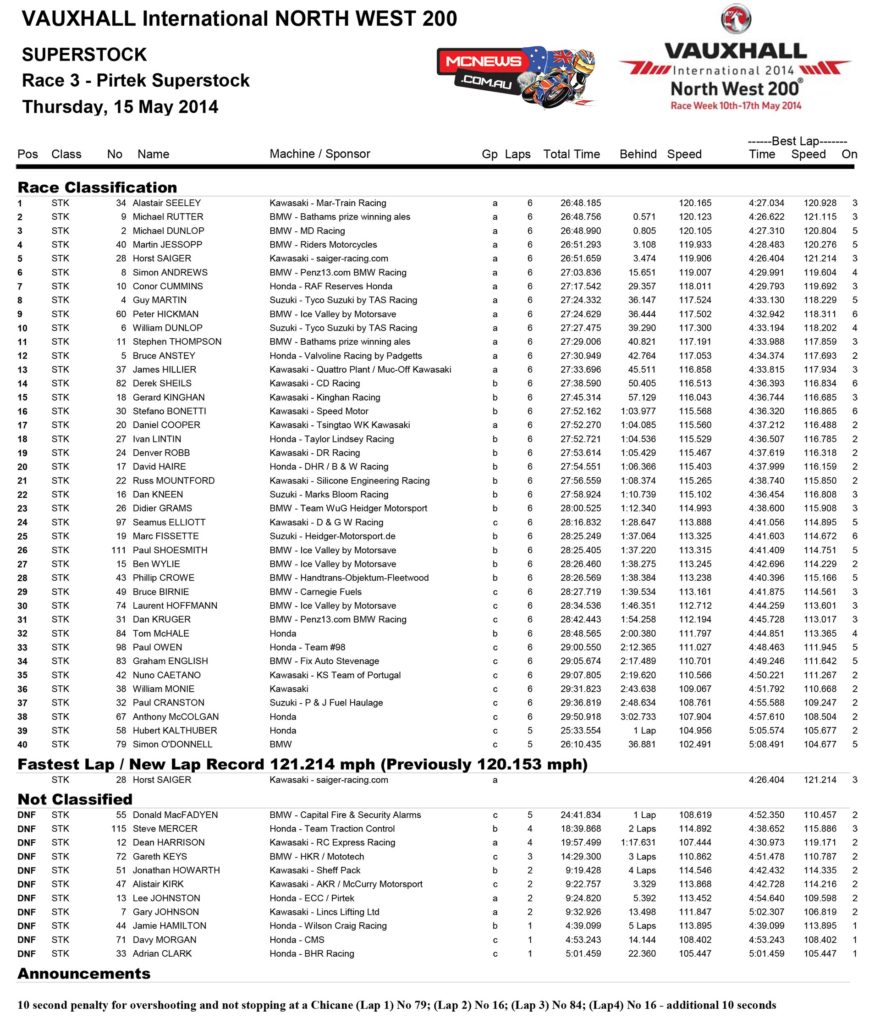