by Trev
in Motorcycle News, Supercross
A A
Share on FacebookShare on TwitterShare

Craig Dack Racing (CDR) has secured one of 10 exclusive team licenses for the FIM World Supercross Championship (WSX) ensuring Australia’s most successful motocross and supercross team will contend with the world’s best.

The CDR team agreement will create a new connection and pathway from the Australian domestic scene to the world stage, and importantly add Australia to the international firepower of the global championship, while bringing supercross dynamo Monster Energy into the mix.

SX Global, the Australian company spearheading WSX, announced CDR together with American team Rick Ware Racing, whose experience spans NASCAR, IndyCar and American supercross, as the next two of the 10 exclusive team licenses it will issue for its global championship. 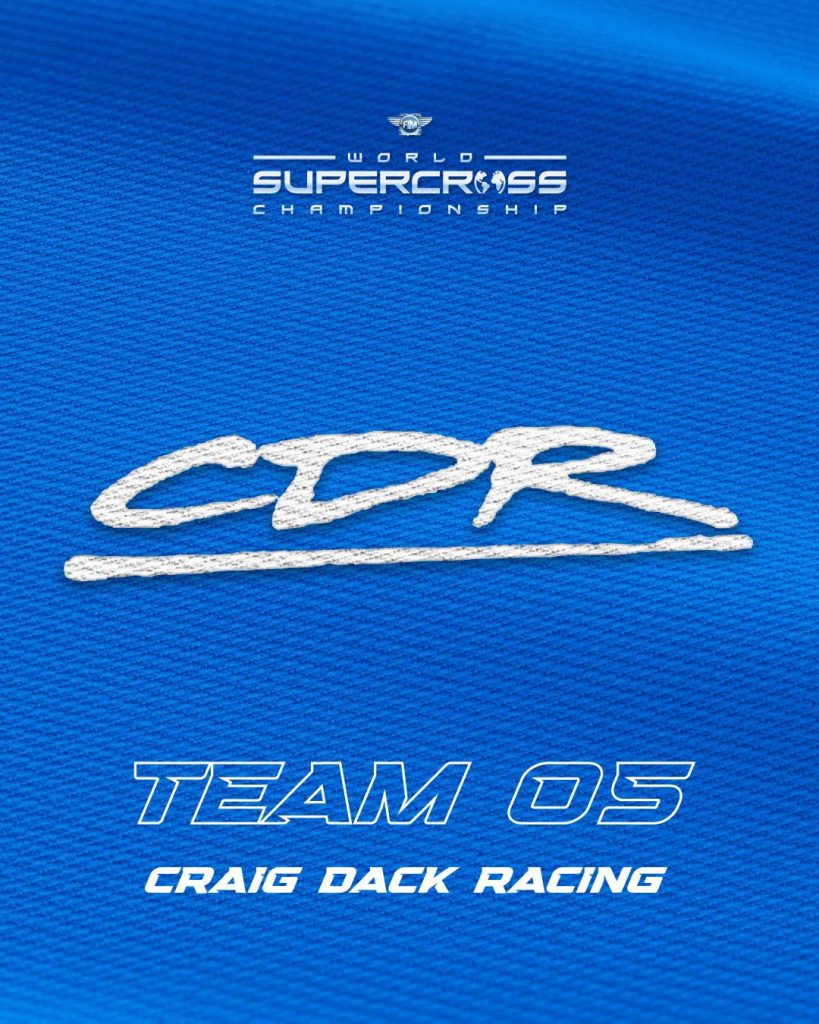 As with the first four teams announced last week, these two teams bring the highest levels of experience in professional supercross and motocross in both the 450 and 250 classes, while also bringing a shared vision and spirit of collaboration in elevating the sport through this dynamic global series. Combined with the French representation of Bud Racing and GSM Yamaha teams, the Australian representation underscores the Championship’s global emphasis and mission of reinforcing and increasing supercross’ relevance in key international markets.

Over the coming weeks, the WSX four remaining licensed teams will be announced, completing the exclusive 10-team field. These latest two and team principals are broken down in greater detail below:

Supported by Yamaha, Dack runs the most successful team in Australian motocross and supercross history. Spring boarding motocross and supercross star Chad Reed’s career, Dack managed the Yamaha of Troy team in the United States where Reed won 7 of 8 races in his first season on the East Coast Championship. Furthermore, Dack’s team is supported by action sports powerhouse, Monster Energy.

A mainstay on the NASCAR circuit, former driver Rick Ware runs the Rick Ware Racing (RWR) Team with extensive experience in the world of motorsports. Boasting more than 1,000 starts in multiple premier auto racing series around the world, RWR currently competes in the NASCAR Cup Series, IndyCar Series and IMSA WeatherTech Sportscar Series. Ware is also a veteran of motocross and supercross, having owned and managed supercross teams in the late 2000s.

“Aside from operating and competing at the highest levels of the sport, the addition of Dack’s Monster Energy Yamaha team expands the international relevance to our backyard where we have a storied history of popular supercross events in Australia, while also bridging across the broader realm of prominent American auto racing through Rick Ware’s history in NASCAR and IndyCar racing,” said Adam Bailey, managing director – Motorsport of SX Global. “It’s incredible to see the intensive demand for these exclusive licenses with teams at the highest levels of competition, and with the sophistication and commitment to support and sustain a truly global Championship.”

A model unprecedented in supercross yet utilised amongst the majority of thriving sports leagues and motorsports series around the world, WSX features an exclusive team ownership structure that allows each team to increase its value over time, while also enabling a host of commercial opportunities on global and regional levels for international and local events. This unique model, combined with SX Global’s allocation of $50 million specifically for team and rider support over the Championship’s first five years, has driven widespread interest for the coveted 10-team allotment, as evidenced by more than 40 ownership applications submitted from suitors across the globe.

“Our ambitions and plans have faced incredible skepticism, but for those that have doubted us, or continue to do so, we hope this lineup of credible, powerful teams and owners speaks volumes to our ability to bring this Championship to fruition at the level necessary to give fans across the world a truly top-tier global supercross offering,” said Tony Cochrane, president of SX Global. “What may be most valuable to us is the strength that each of these teams brings our series through their spirit of partnership – that shared vision and commitment to global success is extremely powerful and will drive us forward in the years to come.”

The Championship will feature a highly exclusive structure, with unparalleled level of financial support for teams, including seed funding for every team awarded a license, appearance fees at every round, and logistics and freight support. The global series will feature the richest championship prize purses in the sport’s history, with a total of USD$250,000 up for grabs at each round.

The FIM World Supercross Championship will annually take place in the second half of the year, including up to four events in 2022, from late September through November. 2022 will serve as a “pilot” season, allowing the championship to establish itself and build momentum going into 2023. 2023, and subsequent years, will see the FIM World Supercross Championship expand annually between June and November, with up to twelve events in 2023.