Precision work in the wind tunnel

The FIM Superbike World Championship (WorldSBK) may have been forced to take a break from racing for a few months, but work has continued where possible at BMW Motorrad Motorsport. In the wind tunnel, for example, engineers have been fine-tuning the aerodynamics of the BMW S 1000 RR in the BMW Group Acoustic Wind Tunnel. An important role in this work is being played by BMW Motorrad World SBK Team rider, Eugene Laverty (IRL) – in the form of a 3D model. 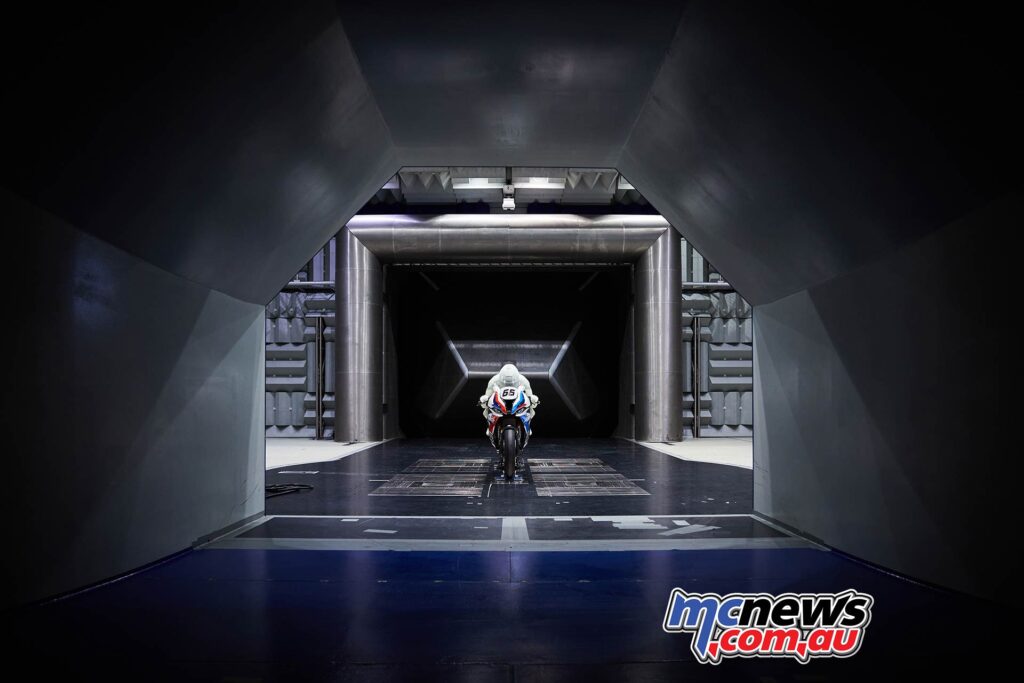 Aerodynamics play a key role in determining the top speed of a World Superbike. Even the smallest of details can make a big difference here. The goal is to keep the aerodynamic drag as low as possible. The BMW Group Acoustic Wind Tunnel in Munich (GER) has everything the BMW Motorrad Motorsport engineers need to test and develop aerodynamic updates for the RR used in WorldSBK.

However, to simulate the flow conditions as realistically as possible, it is not enough to simply position the bike in the wind tunnel by itself. Out on the racetrack, there is also a rider on the bike, creating his own air resistance, even if his riding position has also been optimised aerodynamically. For that reason, the whole package of motorcycle and rider is used in the airflow, which is generated by the wind tunnel’s 2,600-hp electric motor and can reach speeds of up to 255 km/h. To make this possible, BMW Motorrad Motorsport has turned to an innovative method: 3D scanning.

“Eugene was here in Munich with us before the outbreak of the coronavirus pandemic. He was trying to find the ideal sitting position on the RR and, while he was in that position, we took detailed measurements with a 3D scanner,” said BMW Motorrad Motorsport Director Marc Bongers. Detailed measurements means every individual glove finger, every contour of the helmet, every seam in the leather overalls, every crease that affects the aerodynamic drag and with it the airflow. “Based on the data from the 3D scan, we created a plastic model made of two halves. It took about a week to get all the details right, however our 3D Eugene was then ready for action,” Bongers added.

Since then, the plastic Laverty has been providing a very important service. He has racked up over 50 test runs in the wind tunnel. “Using a 3D model like this allows us to work more efficiently on development of our RR,” explains Bongers. “While a real rider must travel to get here, the plastic version is available at any time for testing in the wind tunnel. This means that we can evaluate and implement updates even faster.” Another major advantage of the 3D model became particularly apparent during the coronavirus-enforced break. While WorldSBK riders Laverty and Tom Sykes (GBR) were unable to travel to Munich due to travel restrictions, plastic Laverty was waiting in Munich, ready to get back on the RR in the wind tunnel.

So, what does the real Laverty make of his double? “He’s just a few shades paler than my Irish complexion,” said a chuckling Laverty, referring to the light plastic used to make the model. “All joking aside, it was a little unusual to sit on the bike for so long and to be measured from every angle with a 3D scanner. However, the result is awesome. I can do my bit to make our RR faster without having to be in Munich in person. It’s not every day you get to see yourself as such a detailed model. It is fascinating what is possible with modern technology, and the BMW Group is leading the way in many areas in this regard.”

Following the break for the coronavirus, it has now also been possible to measure team-mate Sykes in Munich. His 3D model will soon also see action in the wind tunnel. The next races for the optimised RR, the BMW Motorrad WorldSBK Team and the real riders will take place on the first weekend in August. The 2020 WorldSBK season, which was suspended after the opening round in Australia, will resume at Jerez de la Frontera, Spain. at the beginning of next month.