Alvaro Bautista (Aruba.it Racing – Ducati) was first on Friday in the combined standings, setting his fastest time in the afternoon session with a late lap time seeing him under the circuit record. “It’s been a positive day for us because it’s been three years since I’ve been with Ducati on this track, so it was important to get the feeling back. This morning, I struggled a bit with the colder conditions, but we worked on small details like electronic and did few more changes on the suspension. This afternoon, we tried the hard tyre option, and I like it more than in Aragon. It could be an option for the race. We also worked with the SCX to be able to use it for the long race. But we need to make some adjustments to make the life of the tyre longer,” he explained. Bautista has won both races at Assen in 2019 for Ducati, but he expects the battle for the win: “to be harder than in Aragon, because Toprak and Jonathan want to get back the first place in the Championship standings. But I hope to be there.”

Toprak Razgatlioglu (Pata Yamaha with Brixx WorldSBK) finished Friday in second place, 0.084s behind Bautista’s best time. “After Aragon, we improved the bike set up and I am now feeling much better,” he said. Razgatlioglu set his fastest time in FP1 having been under the race lap record right from the start, as he did a long run on the SCX tyre in the afternoon session. “This morning we started really good with a very great lap time on the SC0 tyre. This afternoon, we did a race simulation which was very positive.” He will be chasing his first WorldSBK victory at the TT Circuit Assen he explained: “We are really strong at this track, and I am also coming to fight for the win. I feel we are ready for the race. But in the race, it’s always difficult because Alvaro and Jonny are really fast.”

Jonathan Rea (Kawasaki Racing Team WorldSBK) concluded Friday in third place, 0.298s behind Bautista. The six-time WorldSBK Champion set his fastest lap in FP2. Rea began a flying lap right at the end of FP2 but was losing most of his time, in comparison to Bautista, in the fourth sector, with about a tenth and a half to find in that area. “In FP1, I felt like we lost the session a little bit with our setup. The bike didn’t quite feel like my bike. It’s a setup we’ve been using since the start of the year so something back to like a halfway house compared to the Assen setup we had and what we had at the start of the season. I felt much more comfortable in FP2, it was almost like starting again, so I feel like tomorrow we can try to make a step, finetune the bike a little bit.” Rea, who will be looking at adding more wins to the 15 claimed in Assen said: “I feel optimistic but talking about winning is so difficult now, WorldSBK is in a really competitive place right now but that’s our target. Our target is to win, but it’s not as simple as that. You still need to go out there and do that. I feel like we have good tools out there to do it and it’s kind of up to me now.”

Alex Lowes (Kawasaki Racing Team WorldSBK) was fourth overall after being third in FP2, “we had a couple of things to try in FP2 but I did get too many laps. But the feeling on the bike has been pretty good since the first exit this morning. It’s nice to be a bit more on the pace than in Aragon. I’m looking forward to FP3 to try to do some consistent laps and finalize the balance of the bike,” he said. “The target is to be closer than the three guys in front. The target for me is to get my first podium of the year this weekend.”

Iker Lecuona (Team HRC) ended Friday in fifth, claiming his personal best lap time in the morning session whilst being just over four tenths behind FP1 leader Toprak Razgatlioglu. In FP2, the Spanish rider suffered a fall at Turn 3 which brought out a red flag. he was back out in the final 17 minutes to take to the track, not improving his lap time. He explained “Overall, I feel good! I didn’t expect this speed; I worked alone, improved lap by lap and I think the pace I have is very positive for the race. In FP2, I have a massive highside at Turn 3. I lost the front and saved it, but then lost the rear and had a highside. Thanks to the team who repaired the bike very fast, so I could go out again and work in FP2. I think we have a good pace for tomorrow.”

Garrett Gerloff (GYTR GRT Yamaha WorldSBK Team) completed Friday’s top six. “I don’t feel too bad on the bike. There was a lot of wind today and it made it a bit difficult for me and I kind of felt like I was fighting the bike in general. In the end, we were still able to do decent times. I think our consistency could be a lot better, but it’s not horrible,” he said. “I don’t know how much closer but I do expect to be closer. Last year, I felt great here and we had a really good set up. We have the set up we have now, which is not too bad, but which is pretty far from where we were last year so at least we have lot of options to try to improve things.”

Michael van der Mark (BMW Motorrad WorldSBK Team) finished in 20th place for his first day back on the BMW M1000RR following his winter injury. He explained “I’m really happy to be back on the bike. It’s my first time on the bike since December. The main goal for us this weekend is to stay calm and do laps.”

For his first appearance in 2022, Leon Haslam (TPR Team Pedercini Racing) was 14th at the end of Friday.

Dominique Aegerter (Ten Kate Racing) topped the combined times by around three-tenths of a second from Can Oncu (Kawasaki Puccetti Racing) on the opening day of practice at Assen. He was one of just three riders not to improve their time in FP2. “We had a good Friday in Assen, with sunny weather but a bit windy. We have a good pace and set the fastest lap time this morning,” he said. “We have some good data from last year and we tested here, even though the conditions were very cold. The first lap was quite fast and the lap time too. I couldn’t really improve this afternoon. We tried some small settings this afternoon, but the wind increased, and we struggled a little bit more. We changed a little bit the tyre, suspension and gearing to see how the bike reacts. We also made some run simulation to see and be ready for the race. We are quite strong and are on the good way to do something similar to last year. It won’t be easy with the competition of different riders and bikes which are very close.” 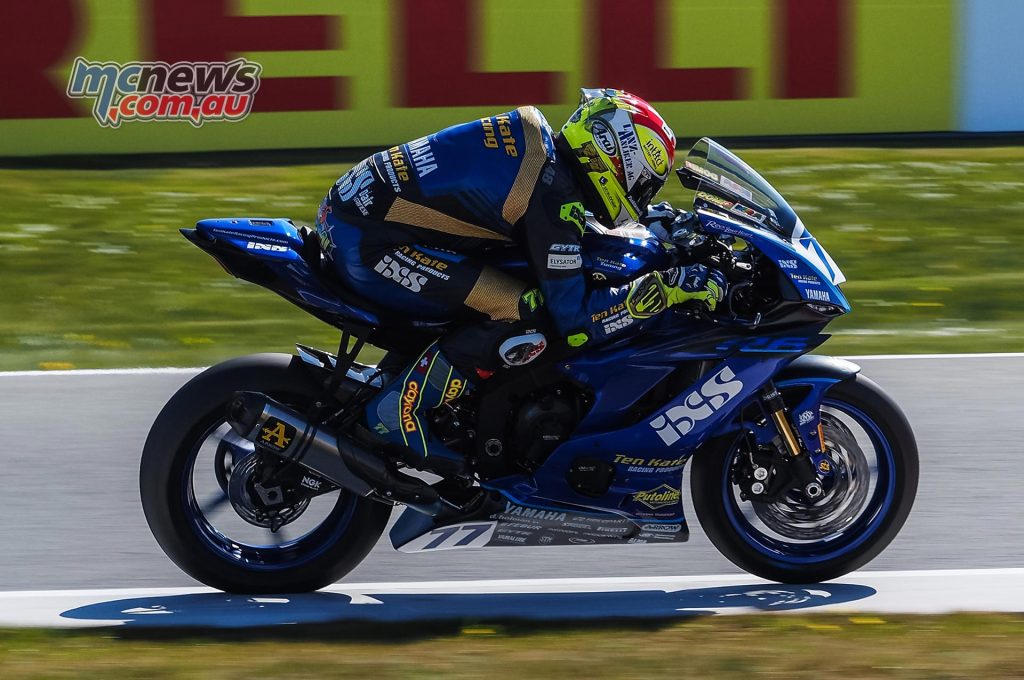 Despite having led the afternoon session, Can Oncu (Kawasaki Puccetti Racing) ended Friday in second place. He set his best time, a 1’37.958s, in FP2 although he was still a couple of tenths down on Aegerter’s best time of the day.

Oli Bayliss was P27 on combined times on Friday – “I tried to get as many laps as possible because Assen is not only a new circuit for me but also a very demanding layout. We had more or less the same set-up as at Aragon because the goal was to spend on the track as much time as possible, and wealready have identified some changes for tomorrow that can help us improve.”

Home rider Victor Steeman (MTM Kawasaki) led the first day of the Motul Dutch Round and was the only rider to lap in the 1’48s. Steeman explained: “It’s nice to be in Assen as it’s a good track for me. In FP1, I did only one late time because we had an issue with the bike, which has been fixed. In FP2, I tried to find the limit, and in the first laps I was a bit over the limit, and I knew what my limit was and I could find my pace.” In 2021, Steeman secured pole position at Assen when riding for KTM and he will aim to get a solid result on Saturday: “I think we can do a great job. Tomorrow morning, I’ll try to beat my own lap record, because I still own it here. In Aragon Race 2, I was in front almost all the time before I crashed when I was hit by another rider. So I think tomorrow the podium is realistic.”

Steeman’s team-mate, Yuta Okaya (MTM Kawasaki) was second in the combined standings, three tenths behind the Dutchman. The Japanese rider was able to improve in FP2 as he improved by about half-a-second compared to his FP1 time. He will be looking at claiming his first podium of 2022 for his team home round.

Despite having led the FP1 session, Bruno Ieraci (Prodina Racing WorldSSP300) finished third at the end of Friday. His fastest time was set in the morning session while he was 18th in FP2. Having finished just outside the podium in Aragon Race 2, he will aim for his first podium finish since 2019.

First and second in the Championship standings, Marc Garcia (Yamaha MS Racing) and Alvaro Diaz (Arco Motor University Team) concluded Friday in seventh and ninth place, as they are both hoping to become Yamaha’s first winner at the Dutch venue in WorldSSP300.

Friday round up from Misano WorldSBK/SSP/300