FX-ASC Qualifying tight at the top

Track temperatures cooled this afternoon prior to the single 20-minute Superbike qualifying session. While the track was a little damp early this morning, and still a little green during the practice sessions, it had been expected to give more grip later this afternoon, that traction didn’t actually eventuate.

As he did here at the round one season opener, Cru Halliday once again took pole position. Curiously, however, Cru’s 1m31.156 was actually slower than the 1m30.829 the Camden 26-year-old set here back in March, when the YZF-R1M was very much fresh out of the crate from Iwata.

The qualifying form of the Yamaha men during that first Friday of the season looked distinctly ominous. A YRT 1-2-3 with all three riders more than half-a-second ahead of Team Honda, and Cru almost a second quicker, the arrival of the new YZF-R1M went off with a bang. It looked as though season 2015 would be a lay down misere for Yamaha and there were some distinctly sour faces in the Team Honda camp as they looked towards a very long season ahead… In fact Team Honda dominated the season opener that weekend, and were not even really challenged over race distance by YRT, their YZF-R1M riders all suffering with grip issues as the races wore on.

The big question will be if YRT have made significant progress in regards to their tyre longevity issues…?

The answer to that query is largely going to decide the outcomes of the races on Saturday and Sunday.

One thing that might help them a little is that race distances are one lap shorter than they were at the opening round. Being so close to the shortest day of the year, organisers are conscious of the very real possibility of running out of daylight, and having to cut races from the program due to failing light if we are to have any delays come race day, thus the races for all classes have been reduced by a lap.

The qualifying results from this afternoon decided the grid  for the two 14-lap AFX-SBK races on Saturday, while the combined points score from the Saturday races will decide the grid for Sunday’s two Swann Insurance Australasian FX Superbike Championship 14-lappers.

Cru’s second pole position of the year will invigorate him for the challenge that lays ahead this weekend, his 1m31.15 pole time coming on the third of his four laps.

Cru Halliday: “It’s unbelievable to get pole. After Mallala the confidence has been pretty well down, but you know that was the arm pump issue. The best thing about today was that I had no arm pump at all. So that is a positive thing heading into tomorrow. However I can’t really get ahead of myself. I got pole here at the opening round and we struggled with the tyres through the race, but I definitely think the team have got the Yamaha Racing Team with Yamaha Motorcycle Insurance YZF-R1M sorted now. We will definitely be a lot more competitive towards the end of the race. For now we just have to think about what we are going to do in regards to race strategy and tyres and see how it plays out.”

The ever wily Wayne Maxwell was only fractionally slower than Cru, a 1m31.265 to the defending champion. His time however coming on the second of his two laps, Maxwell’s rear tyre thus having two laps less wear than Cru, and three less laps on it than most of the other riders in the field, including third placed qualifier Troy Herfoss. The Goulburn rider bounced back from an early crash in FP3 that saw him miss that entire session before reasserting himself with a 1m31.282 on the third of his five laps.

Wayne Maxwell: “I’m happy to be starting from second for tomorrow. I’m happy with my lap, it was nice and easy. I only did the two laps as we need the tyre for the weekend. We are in a good position to be competitive tomorrow. We have worked through a number of settings on the Yamaha Racing Team with Yamaha Motorcycle Insurance YZF-R1M. We will work through a few more tomorrow and hopefully on pay day we are there or thereabouts.”

Sean Condon was the leading Kawasaki rider and rounds out the front row with a 1m31.339 ahead of fellow Kawasaki pilot Mike Jones, the Cube Racing rider putting in a 1m31.391 on the third of his four-lap stint.

Jamie Stauffer did the most laps of the top runners, seven rounds of the 3.93 Grand Prix layout for the Kurri Kurri veteran. Stauffer missed the opening round here after breaking his pelvis during the World Superbike support races at Phillip Island early in the year. Stauffer’s 1m31.492 good enough for sixth place ahead of Glenn Allerton, who was fractionally slower than the time he set in free practice.

Glenn Allerton: “I had a strategy and I stuck to it. The overall position in seventh is definitely not where I want to be. I wanted to be on the front row, and I feel that I have the pace. However my plan was to do two laps, no matter how good they were. I wouldn’t say they were great laps, however I’m fairly consistent and I have a good feeling with the Yamaha Racing Team with Yamaha Motorcycle Insurance YZF-R1M. The racing side of things is always a lot different, but yeah I am disappointed that I’m not on the front row, but we have two big races tomorrow to sort ourselves out. I’m pretty sure no one will get away tomorrow as we are all fairly equal. I’m feeling pretty strong and happy with my YZF-R1M. I do feel as I have got a bike that I will be able to make passes on, so I’m excited about tomorrow and Sunday.”

The real news is that less than four-tenths of a second cover that top seven. Which means that, in today’s conditions at least, nothing separates that heptad over one lap around this traditional Eastern Creek layout.

For quotes from all the top riders as they look towards the weekend’s action check out our very comprehensive report posted after today’s practice sessions. 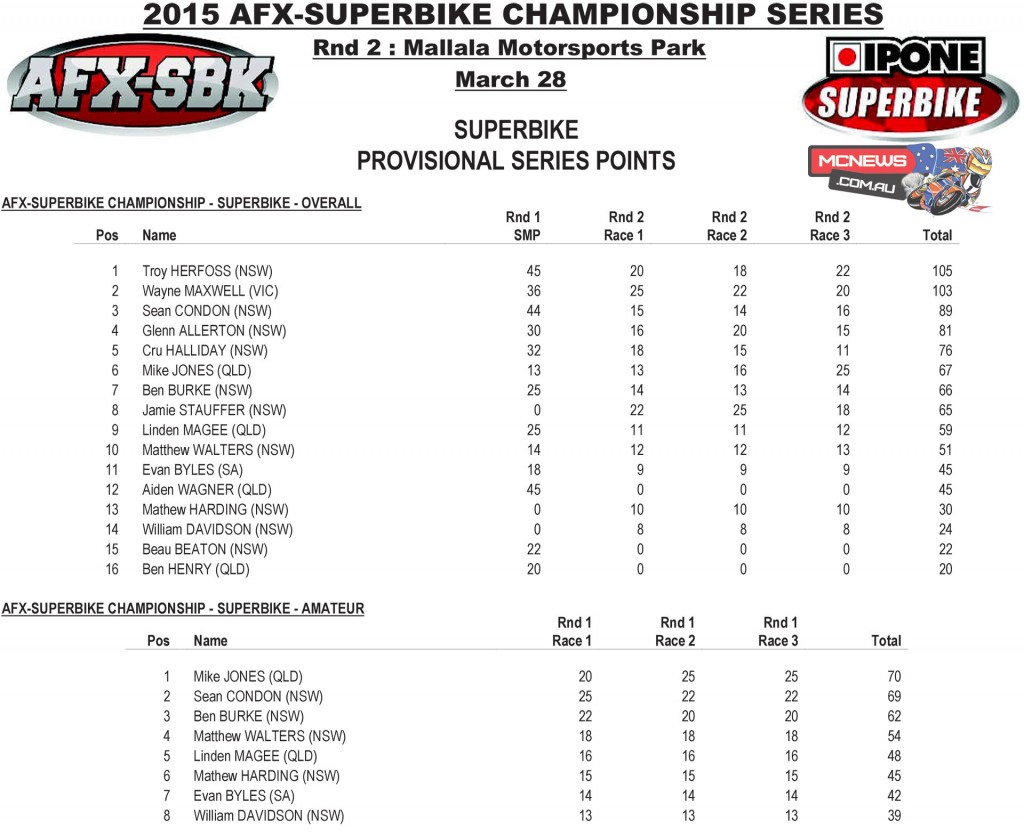 MX Nationals – Where have they been?

MX Nationals - Where have they been?