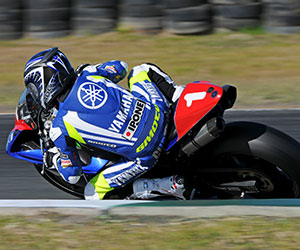 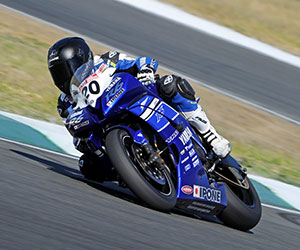 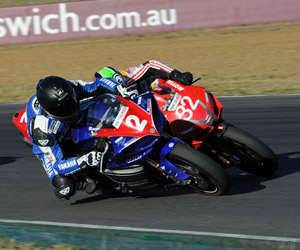 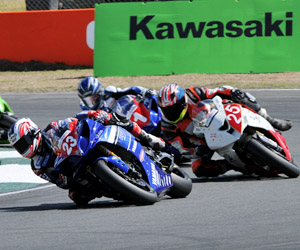 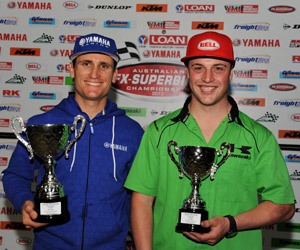 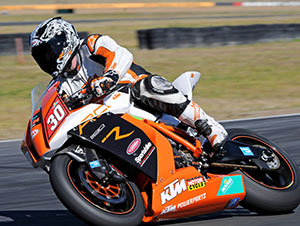 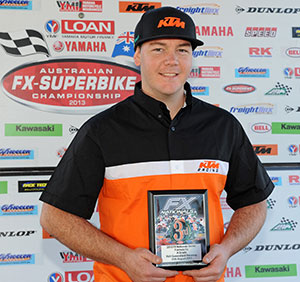 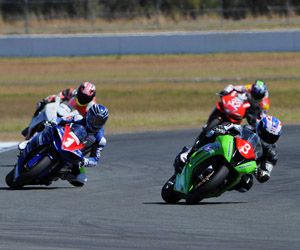 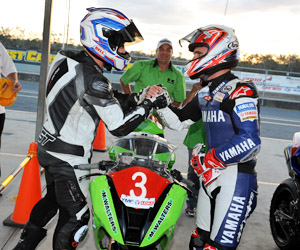 rounding out the front row. The quartet sperated by only .335 of a second.

Halliday made good use of his pole position getting the jump in race one to lead the field. Wagner got a blinder of a start slotting into second from Olson and Jones as they completed lap one. Wagner’s podium aspirations were dashed when he out braked himself at turn 2 running into the gravel trap on the lap three, rejoining in last place. Halliday had his head down trying to break away from Olson, Jones and Callum Spriggs (Allsite Concrete Cutting Yamaha R6) trying to hang onto the leading group.

With Wagner fighting his was back through the pack, Olson and Jones closed in on Halliday. The trio were inseparable trading places at every opportunity in the run to the flag. Olson the victor from Jones and Halliday, .695 seconds the gap at the line. Spriggs rode through unchallenged to fourth. Michael Blair (Blair Build/M&C Plant Yamaha R6) had a race long battle with his Malaysian teammate Mohd Ramdan (Petronas/AHM Malaysia Yamaha R6), Blair holding on to grab fifth.

Spriggs made the best of the start in race two heading the field into turn 2, Halliday second with Olson, Jones, Blair and Ramdan in close pursuit. Olson had his ears back passing Spriggs for the lead on lap two and never looked back, increasing his lead ever lap greeting the Chequer 2.221 ahead of the pack. The fight for the remaining podium positions had all the action, Spriggs and Jones got the better of Halliday early on with the teammates trading blows. It was Wagner who was on a mission starting ninth after his race run off, picking off Ramadan then Blair and Halliday by lap 6 of 9. Not content with fourth behind pit garage buddies Spriggs and Jones, he passed Jones with two laps to go. Not able to pass Spriggs, Wagner took a well deserved third, Jones right behind in fourth and Halliday around a second back in fifth.

A lengthy oil cleanup had race three reduced to a seven lap screamer. Olson looked set for a win with Wagner, Spriggs and Jones scrapping it out behind. But with two laps to go Wagner pushed through to take the lead. Olson fought back with Jones in the mix. Olson regained the lead and led into the last corner but Jones drafted perfectly out dragging Olson to the line and taking the win by .040 of a second. Wagner could only watch just .213 seconds behind in third. Spriggs took fourth from a distant Halliday in fifth.

Olson “I thought I had Mike covered into the last turn but he got me on the line, that was a great race”

Jones “I only got home from Europe on Thursday and the jetlag was getting to me. I seemed to forget about it the faster I got, the winning feeling is just fantastic. Thanks to Callum and the Allsite Concrete Cutting Team for letting me ride one of his spare bike”

Kevin Curtain had some early pressure from Angus Reekie who continues to improve on the aging KTM RC8R lapping around a second quicker than his visit to Queensland Raceway during the ASBK round in June. Reekie qualified second fastest scoring a strong second place in race one but crashed out pushing hard to stay with Curtain in race two and not able to greet the starter in race three.

Adrian Pierpoint (Quadriant Developments/Aprilia Tuono) made light work of the Nakedbike class running at the pointy end of the Pro-Twins/Nakedbike combined races, with three easy wins and round victory. Peter Ward road the very old Inglis Plumbing Yamaha FZ1 to second with results of 4-2-2. Ian Godwin (MV Brutale/-3-3-3) in third.

Loosing a machine from the grid hasn’t stopped these innovators from charging ahead (sorry for the pun). Daniel Sailer (Ripperton Racing/Yamaha R1 based) and Jason Morris who joined the Varley Electric team for round 2, have both made huge advancements both running some 8 seconds under last years lap record.
Morris wasn’t able to make the grid for race one handing the win to Sailer. But in race two Morris held the lead for the first two laps of the three lapper, with Sailer pushing past on the last lap taking the win by just .144 seconds, both riders lapping in the 1.24 second bracket.

Gregory Farrell (Honda CBR400/3-1-1) picked up the pieces after the flying Stephen Craig took the win in race one but was unable to contest the remaining races with mechanical problems. Doug Wood (Monarch Power Sweeping/Yamaha FZR400) was second on the day with 2-2-2 results. Gary Sherry third on the WRP Bridgestone Derbi Mulhacen.

Callum Barker was the only entrant on the Aly-Tek/Power Plus Honda NSR250 but gave the bigger bikes plenty currie in the combined FX450GP/Ultra Lites/250 Mono/GP races.
Barker taking a second place and two outright wins.