Organisers originally dictated a one set of tyres restriction across a whole race weekend but the scintillating pace of the front runners during practice saw a meeting called with the riders to discuss tyre life. A consensus was reached that two sets of tyres would be allowed for each race meeting, one set for qualifying and Saturday, and another set on Sunday. Slower and more budget conscious riders can still elect to have one set of tyres marked for both days.

Brandon Demmery had taken pole position with a 1m08.950. Kyle Buckley the only rider to get near that mark, a 1m09.243 his best while the next best was nearly three seconds behind that pace setting duo.

Things were a little close in the opening race of season 2014 with an exciting tussle between Demmery and Buckley, a little too exciting at times!  Lapped traffic started to come in to the equation after only five laps, such the speed difference between riders in this category. The final lap saw Demmery and Buckley slicing through the lapped traffic but it was Demmery that sliced and diced most accurately to take the win from Buckley by a couple of bike lengths.

Glenn Scott led the Formula Oz field away for their opening stanza with Chris Trounson and Jed Metcher in tow. Albie Wheeler was running a strong fourth place in the opening two laps before throwing the Yamaha away at the top of the circuit. Officials chose to red flag the race due to the bike being in a somewhat risky position should another rider crash at the same point.

Trounson got the best run off the line in the re-start ahead of Scott, Metcher and Lovett.  Phil Lovett was on a mission from the re-start and trying to put his Kawasaki under Metcher’s at almost every turn in the opening couple of laps. Up front Glenn Scott was doing everything he could to get the better of Trounson but the GAS Honda rider was fending off every advance, it was nail biting stuff. Scott took the victory after Trounson got a little too much wheelspin on to the main straight while the Insure My Ride Honda man got the power down to blow past on the run to the line, Metcher crossed the stripe in third a few bike lengths behind the two Honda men, but set the fastest lap of the race (59.997) on his Kawasaki.  On combined times the victory went to Scott by a more considerable margin but that did not take away from the excitement of the spectacle.

Supersport competitors then gridded up for the opening bout of the series and it quickly became a battle between two men, Aaron Morris and Aiden Wagner. The leading pair left the battle for third place quickly behind them, that fight being waged by Matt Davies, Daniel Falzon, Aaron Gobert, Callum Spriggs and Micheal Lockart. Falzon lost a number of position on lap four however when he was flicked out of the seat in the middle of the double-left.

As the race wore on Wagner struggled to match the pace of Morris and lost touch of the race leader but retained a very comfortable gap to third placed Callum Spriggs, who by two-thirds race distance had left Matt Davies, Michael Lockart, Daniel Falzon and Aaron Gobert behind. At the end of the 11-lap race distance Morris took victory by 1.48 seconds over Wagner with Spriggs a further 7.8 seconds behind in third. Davies won the heady battle for fourth.

At 1110 the Superbike riders set off on their warm up lap.  Pit lane was lined with all the riders from all classes in anticipation of the battle ahead, set to be the best domestic Superbike racing in years if the form guide was anything to go by.  Disappointingly, crowd numbers were low but those that did turn up were treated to a fantastic show.

Poleman Glenn Scott took full advantage of his grid spot to leap out of the blocks to an early lead ahead of Glenn Allerton but it was the BMW man that led across the stripe for the first time. Scott made numerous attempts to get past around the back of the circuit but without making a desperate lunge he was not going to slip past the BMW.  Watching on a couple of bike lengths behind was Sean Condon on the Bikebiz Kawasaki.

As the race went on Allerton started to inch away from Scott, who perhaps should have made a rash move to ensure Allerton could not get any clear air to use that power of the BMW to pull away.  It turned out however, that his watch and wait decision started to pay dividends as by half race distance things had closed up once again, Allerton, Scott and Condon virtually nose-to-tail.  Wayne Maxwell had broken away from the fourth placed battle that had been waged between himself, Goldsmith, Herfoss and Stauffer.

Scott got Allerton on the change of direction to the right after the double-left to take the lead with four laps to run. Allerton powered back past on the main straight but it was now game on. Maxwell was the fastest man on the track and had started to close on that leading trio.

Scott again got Allerton in the same place on the next lap, Condon also showed Allerton a wheel as things really started hotting up. This time Scott held out Allerton down the main straight, or perhaps Allerton had let the Honda man hold sway and was biding his time until the last gasp of the 11-lap race distance.

As they got the last lap board Maxwell had joined the fray. Up front though Allerton blasted around the outside of Scott at turn one to take the lead. Scott again showed a wheel on the change of direction but Allerton was wise to that one by now and held him out and went on to take the win by 0.241 of a second. Sean Condon third, 0.579 of a second behind the winner while Wayne Maxwell took fourth place, 0.889 behind the winner. Maxwell set the fastest lap of the race with a 59.004.

Kevin Curtain had been having bike troubles during qualifying and one can only assume that he has continued to be plagued by electrical gremlins as he failed to finish the race. 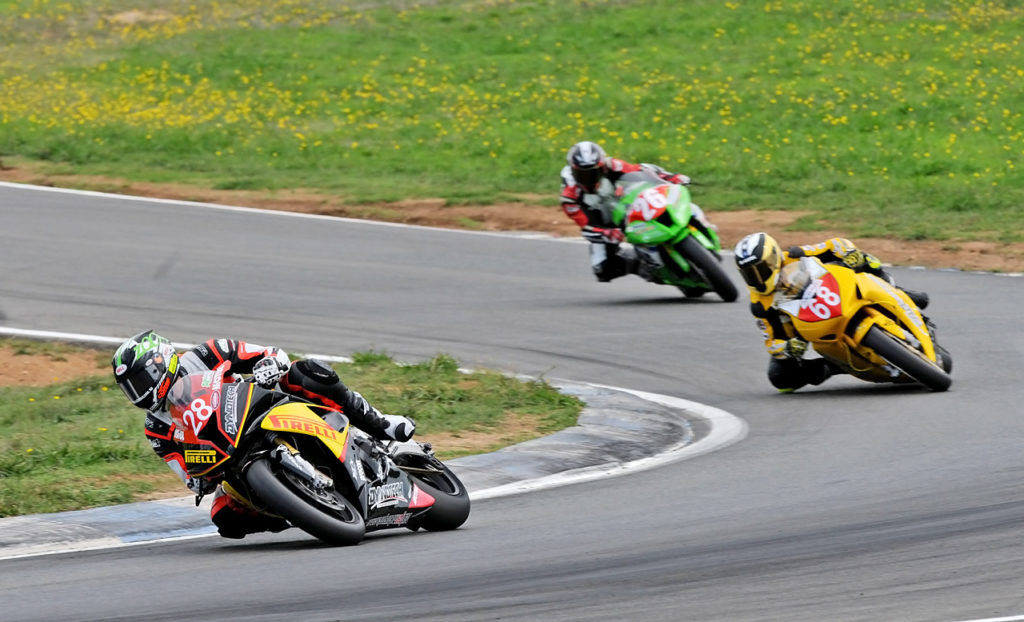 The final class to have their opening bout of the season was the combined Pro Twins / Nakedbike category. Craig McMartin on the 1199 Panigale S and Angus Reekie on the KTM 1290 Superduke quickly broke away from the field. McMartin’s Panigale seemed to have the headlights on which is certainly you don’t see very often at a race meeting!  It made for quite a stunning sight under the somewhat overcast sky.

McMartin got the last lap board with a clear two-second lead over Reekie, who in turn had a very handy gap over third placed Simon Galloway on the KTM RC8R.