by Trev
in Honda, Honda News, Latest Bikes, Motorcycle News
A A
Share on FacebookShare on TwitterShare

Honda would like to thank its customers for their continued support, as new industry sales data confirms Honda has retained its position as the largest selling ATV manufacturer in 2014.

The reliability and innovation throughout Honda’s entire ATV range has made them the obvious choice for farmers over many years. Australian business owners know it makes good business sense to own a Honda, making Honda ATVs Number 1 in Australia.

The numbers reflect the sterling reputation of the Honda ATV range in the Australian farming community, earned over time thanks to its unique combination of durability, power and practical innovations.

In 2014 Honda released all-new TRX420 and TRX500 ranges, boasting further improvements to durability and comfort which were strongly received by the farming community.

Honda’s consistent dedication to quality in the ATV range has also set it apart from the field.

For early 2015 Honda will release a further three all-new ATV models, plus more announcements later in the year. Combined with an expanding choice of Side by Side (SxS) vehicles, Honda will remain the number one choice into the future.

For more information about the entire Honda ATV range go to your nearest Honda Dealer, ring 1 300 1 HONDA or visit www.honda.com.au 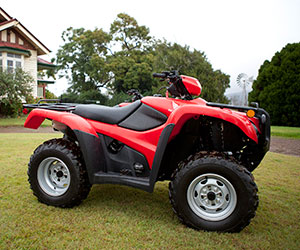