Firstly a note for our overseas readers – Australia only receives one version of the CBR 600 and it is the sport model.  In Australia it is known as the CBR 600 F4i. The CBR 600 debuted in 1987 and has proven to be one of the most reliable sportsbikes of the modern era.  The ‘F’ series of road-bikes refers to the model being user-friendly and not an all out sports machine.  They say the new F4i has departed from that concept to become a lot more track focused, which this new F4i certainly is, but it has not lost it’s user-friendliness along the way.

It now features a more aggressive profile to match its improved track performance, and the front end is now much sharper and angular; a concept first kicked off by Yamaha with their ‘R’ series of road-bikes which Kawasaki then took up, now followed by Honda.  The headlights are new dual multi-reflector units covered by a one-piece flexiglass lens.  Unfortunately I did not get a chance to test their effectiveness in the dark.  The front of the bike now features large ducts for the airbox in the hope of gaining some positive airbox pressure at speed.

passenger.  I did not cover any long distances on the new F4i but I don’t think the seat will cause too many complaints in the numb-bum department.  The pillion seat opens by way of the ignition key inserted at the rear of the bike and has enough space for a u-lock or perhaps a tightly rolled set of wets, but not much more than that.

The F4i’s taillight is also smaller, taking after the distinctive two-part shape of the CBR900RR Fireblade with a new dual-bulb configuration.  The number plate light on the rear guard extender does seem a little bit of overkill, no doubt the victim of an Australian Design Rule or something equally silly.  Previous CBR 600s came with a centre-stand and, in line with Honda’s more sporting slant in the marketing of this model, that has been done away with.  All is not lost, however, as the lugs for the centre-stand are still there, so you can fit one yourself.  The stands will be available through Honda dealers. 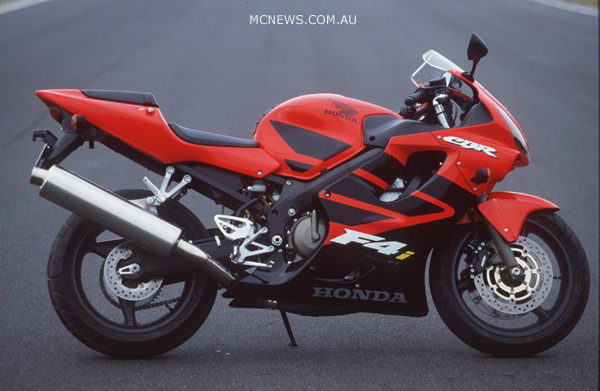 The liquid-cooled in-line-4 engine now features a new fuel injection system and other improvements designed to increase its maximum power while achieving smoother response and stronger performance.  In my opinion it has achieved this aim.

Single intake valve springs are replaced by double springs for more precise operation under the stresses of racing.  Honda has taken a leaf out of the hot-rodders’ handbook by adding a bit more intake duration on the cam.  Air cleaner capacity has been increased from 6.5 to 8.1 litres and ram air ducts modified with a new lower intake resonator chamber to smooth response and reduce intake noise (why would you want to do that ?).

The Honda seems to have a stronger mid-range than most in this class but could do with a little stronger top end kick.  However, I did see over 240kph on the digital speedo’ down ‘Gardner Straight’.

Cold starts are as fuss free as possible as the F4i is fitted with the same sort of automatic fast idle system as the Fireblade.  I love this feature and the everyday biker will always see the advantages of this system.  How many times have you started the bike only to walk away to open the gate or something similar to come back to a bike revving its head off so hard that it rattles the fillings out of your teeth?  No problems with that here.  When are the other manufacturers going to catch on to this?

The gearbox has also come in for attention with lower 5th and 6th gear ratios for sharper top-end performance.  Transmission main shaft length has been increased by 2.5mm for enhanced durability.  One clutch plate has been added, increasing in number from 7 to 8 for greater durability.  This is great to see, even though the old CBR never had a reputation for eating clutches.

The instrumentation is comprehensive with an analogue tacho’ and digital speedo’.  When there are 3.5 litres left in the fuel tank one bar shows on the left side of the LCD which then progresses through to 4 bars as the fuel level gets lower before starting to flash when things are getting a little dry.  The clock stays on even when the ignition is switched off which is a handy feature.  The LCD also incorporates an odometer and dual trip-meters.

I completed nearly 100 laps around Victoria’s magnificent Phillip Island race circuit onboard the new CBR 600 F4i and came away impressed.  The chassis has a great balance which inspires confidence no matter how hard or soft you push.

Talking of soft, the front forks are a little soft for the guys who brake VERY hard.  And, those brakes are great, but if used to their full extent they will bottom the forks.  Into Honda corner I had the forks fully compressed with the resultant chirp, chirp, chirp from the front tyre as it lost contact times.  I must stress that I do use the brakes very hard (the practice of hundreds of rolling stoppies comes to good use sometimes) and most will not find this a problem at all.  I did manage to dial it out but then went back on track and proceeded to brake even harder again which brought on the same bottoming problem.  All track day fiends normally modify their forks with different springs, oil weight and air gap so this is no major problem as it will be easily overcome for a minimum of dollars.  The forks do not misbehave at any other time and gave me great confidence when turning in.  I liked the front of the CBR 600 F4i better than the R6 or ZX-6R but they don’t quite come up to the same level of the sublime front forks fitted to the GSX-R 600, the Suzuki is the benchmark in this area.

The CBR compares quite well against the opposition on the weight front,

As a race bike the CBR has a great basis to work from with a really nice balance to the chassis and a lot of over-rev on the standard engine.  This engine is designed to rev a lot harder than it does in it’s standard guise which means the tuners will reap great horsepower benefits from blueprinting, aftermarket pipes, cams and injection mapping.  These things will howl in World SuperSport trim.

As a road bike the CBR will also excel, great performance married with practical things like good luggage hooks, a very comfortable riding position and other user-friendly features such as the previously mentioned automatic fast idle system will see to that.  For the every day biker, I see these little things as making long-term life with a motorcycle just that little bit more pleasurable.

If you were to ask me which 600 I would buy?  The answer would be a close call between the GSX-R and CBR.  In standard form the GSX-R has the performance edge but the CBR could easily be put in the same league for track-work with a little suspension fettling and a higher level muffler.  The Honda has the edge over the Suzuki when it comes to build quality but the Suzuki has a rawer and racier feel to it.  The decision between these two is simply too close to call for me.  The nutters will prefer the Suzuki, the more practical will prefer the Honda. 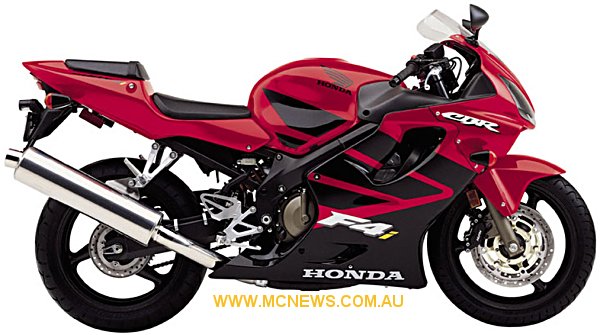 One mad and very bad dragbike