And of course for the $40,990 asking price that a fully loaded Gold Wing commands you can indeed get quite a car but that’s missing the point.

The Gold Wing may be big, but it is still a motorcycle and provides more thrills than any cage this side of an Italian or German supercar ever will.

Off the line the torquey engine can easily overcome Bridgestone’s finest in the first couple of gears. Get the launch right and 100km/h arrives in around four seconds.

At the drag strip the machine is capable of 12 second passes. And yes, the best six figure sports cars can do that too, but they can’t satisfy a motorcyclist’s need to lean.

In the hills the Gold Wing handles well and is only upset by large mid-corner bumps. Smooth and precise is the key to really making the Gold Wing boogie. Get it right and it’s quite a satisfying dance partner.

Handling and ground clearance is far superior to most cruiser style motorcycles and in tight terrain the Gold Wing can be hustled reasonably well.

In faster bends the soft suspension does struggle to control the 390 kilogram mass but the Gold Wing still performs better than you might imagine.

The Gold Wing is clearly the handling benchmark when it comes to full dress touring motorcycles.

Around town the Gold Wing is quite nimble for its size. It responds well to peg pressure and thanks to the low 740mm seat height does not require a strong and burly rider to negotiate city traffic safely.

When it comes to parking a handy reverse gear can be selected to help with really tight manoeuvres.

Dual combined brakes with ABS means that for all but hard braking the pilot needs only to use the foot brake as that brings into action the centre piston of the rear and right front calipers and the outer pistons of the left front caliper.

This balanced braking through the foot lever, along with the anti-dive mechanism built into the left fork leg, keeps the Gold Wing wonderfully neutral. In a series of tight corners you can just use the foot brake a little between the turns and lean from side to side while letting the Gold Wing effortlessly grunt its way between each turn. It’s a seriously magic experience, especially when accompanied by your favourite tunes.

Peel a couple of fingers away from the heated grip to squeeze the front brake lever and all remaining pistons are brought into play.

The 1832cc incarnation of the six cylinder boxer engine was first introduced in 2001 and despite some minor tweaks has remained basically unchanged since. It has proved robust and reliable. Shim under bucket valves require adjustment only every 48,000km and a huge 4.6 litre oil capacity provides peace of mind for 12,000km minor service intervals. The shaft drive system is also well proven, as is the gearbox.

Trouble free long distance motoring was the design criteria for the Gold Wing and it certainly scores a bullseye in that area of its brief.

Even a run from Melbourne on its coldest, wettest and windiest day in many years, down the Great Ocean Road and on to South Australia, the Gold Wing kept me mainly dry and warm in the most extreme riding conditions I have ever encountered.

At times I was down to less than 50km/h as rivers of rain ran across the road and extremely powerful gusty winds tried to blow me into ditches.

I had to call on every ounce of my riding experience to remain upright; including riding the rear brake and pushing the machine down into the wind as I controlled the pitch and yaw through my shoulders while sitting on the upper edge of the seat.

It was a tense and sometimes terrifying ride but that was due to the insane weather conditions rather than any problem with the bike.

Nonetheless, it did highlight the fact that Honda as yet does not offer any traction control systems on their motorcycles. But I can’t imagine in those conditions any stability control system would have helped, I had the rear brake to assist in modulating the drive and helping to keep the suspension loaded.

Like any driver or rider aid, ASC obviously benefits the less experienced rider much more than a seasoned diehard.

One thing Honda has brought to market well before anyone else however is the airbag.

Four crash sensors mounted on the front forks determine when a collision has occurred and sends a signal to the system’s electronic brain which then decides if the impact is severe enough to warrant airbag deployment.

The system activates only in a frontal collision situation and is utilised to help absorb the forward energy of the rider and thus reduce the speed at which the rider may be thrown from the motorcycle.

If you are in the market for a capable long distance two wheel partner then I thoroughly recommend you sample the Gold Wing.

It is by far the most sporting of all the full dress tourers and also the most well appointed.

Unfortunately it is also the most expensive but Honda recently introduced a slightly lower spec’ option that does without the airbag and GPS which reduces the price to $34990.

You know what the most surprising impression you come away with after riding the Gold Wing?

Fun.  Seriously, a Gold Wing is a fun motorcycle that in every aspect of performance makes all cruiser style motorcycles look plain silly.

I remember talking to Wayne Gardner a few years ago about Gold Wings over dinner, and he looked at me a little cross eyed.  So I challenged him to try one out. The next day at the racetrack Wayne did exactly that. The 1987 World Champ came back into the pits with stretch marks round to his ears from grinning and laughing so much.

Motorcyclists often sneer at Gold Wing riders but I reckon that sneer would be wiped from their face after spending any quality seat time on one. I’d stick my hand up for some Gold Wing goodness any time. 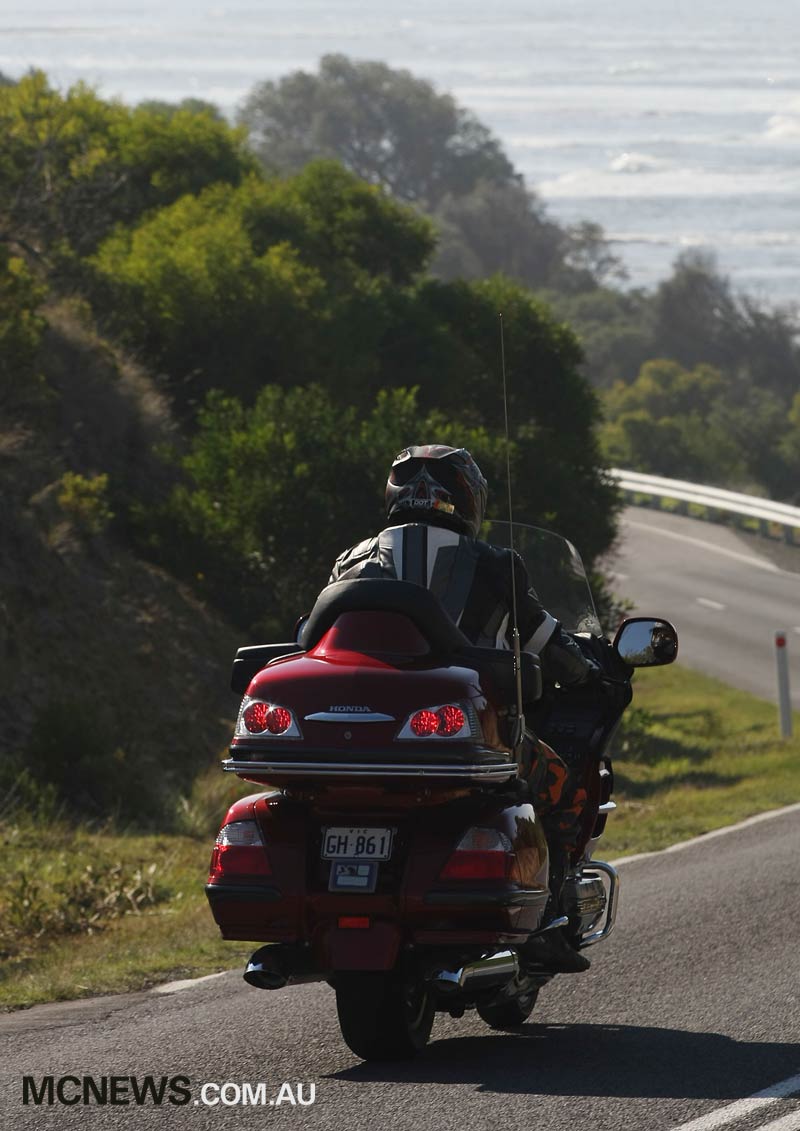