While Husqvarna’s TR650 Terra and Strada might not be such a big deal to the majority of Australian motorcyclists, those that find their two wheel fun primarily on relatively light adventure bikes have been waiting for an affordable alternative to Suzuki’s DR650 and Kawasaki’s venerable KLR650, for almost two decades. To this sector of the motorcycling public, the arrival of Husqvarna’s new TR650 models is significantly welcome news.

The stalwart models (KLR650/DR650) still sell in large numbers. Over the past two years Kawasaki has shifted 999 KLR650s. To put that figure into perspective, over the same period Team Green sold 697 ZX-10R sportsbikes. Clearly, the market for this sort of bike is large, much larger than the sportsbike market, so it comes as no surprise that Husqvarna see this as a potential growth area for their brand.

Borne from the fruits of the BMW-Husqvarna tie-up, Husqvarna’s TR650 models draw heavily from the proven BMW parts bin, primarily the excellent 650cc single-cylinder engine. Husqvarna have massaged this motor to boast 20 per cent more power than seen in BMW guise. That’s nothing to sneeze at as even in base BMW spec’, this engine easily bests the DR or KLR by a country mile. In Husqvarna spec’ the engine doesn’t even deserve to be compared to the 20+ year old designs found in the Suzuki or Kawasaki. Power, torque, throttle response and starting are all a generation ahead. Economy is a factor of huge importance to the more serious adventurers that buy this category of machine, and here the Husky also easily trumps its competitors by around 20 per cent.

More power, better economy, and tractable manners – what’s not to like…? Even the five-speed gearbox/clutch is pretty good.

The Husqvarna’s 14-litre (primarily under-seat and low) fuel cell bests the DR by a litre, but is well short of the KLR650s huge 22-litre capacity. We know from experience, however, that if you are up it for the rent (and due to its very modest output that means nearly all the time), the carburetted Kawasaki can easily use more than eight-litres per 100km. By comparison, the BMW derived mill uses half that on the highway and even when thrashed mercilessly never returns any worse than six-litres per 100km. That has to be taken into consideration when comparing tank sizes. 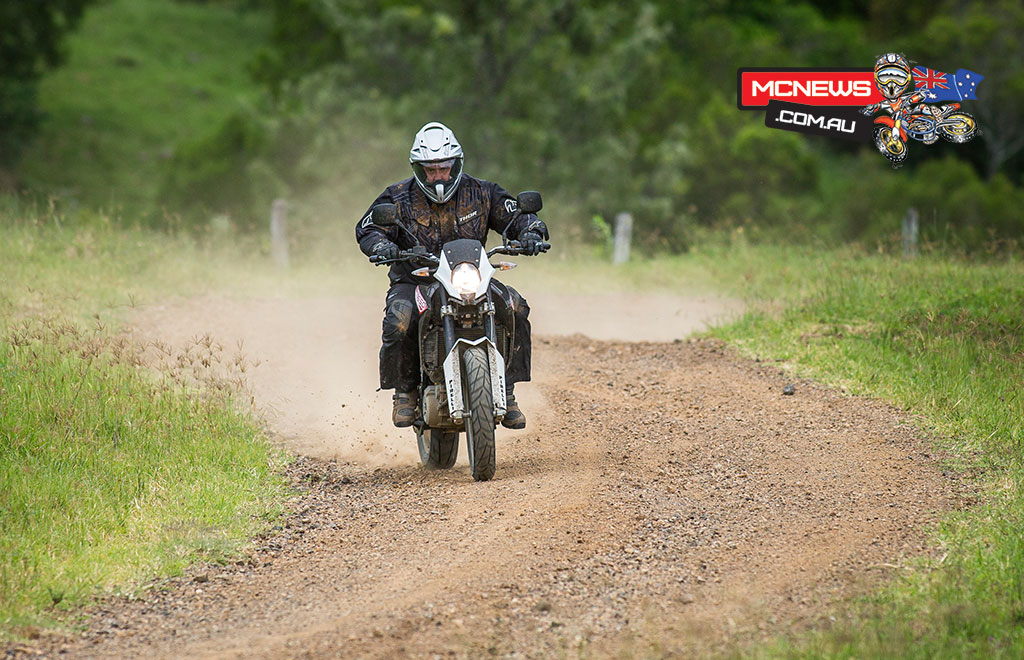 Husqvarna Australia did tell us that aftermarket suppliers of extended range tanks are currently evaluating the possibilities of providing larger tanks. Although, at first glance the Husky layout might prove a little challenging in that regard. With two mufflers at the rear the solution may be to go to a single muffler, allowing space on the opposite side to tuck a small extended range tank in the void left by a muffler. A solution that is often used by owners that modify KTM’s 990 Adventure machines. I still think that for most, due to the frugal nature of the engine, the 14-litre tank will offer enough range for virtually all endeavours.

The Husqvarna machines like Suzuki’s DR, offer, very little weather protection. The KLR650 will prove a much more pleasant long-range companion, as will BMW’s G650GS (not the Sertao). Although having to wring the neck of the Kawasaki everywhere to make any significant forward progress on the road, can get tiring.

As far as we are concerned the Terra is clearly the star of the show.

That’s not to say the Strada has little to offer; it certainly does, but we think there are better options out there for similar money if you intend to primarily stick to the tarmac. For road work BMW’s G 650 GS offers more comfort and protection, and if you are spending 99 per cent of your time on the road, then you simply can’t go past Suzuki’s bargain – and brilliant – latest generation DL650 V-Strom, which at $10,890 is, in our opinion, the best value road motorcycle ever made. 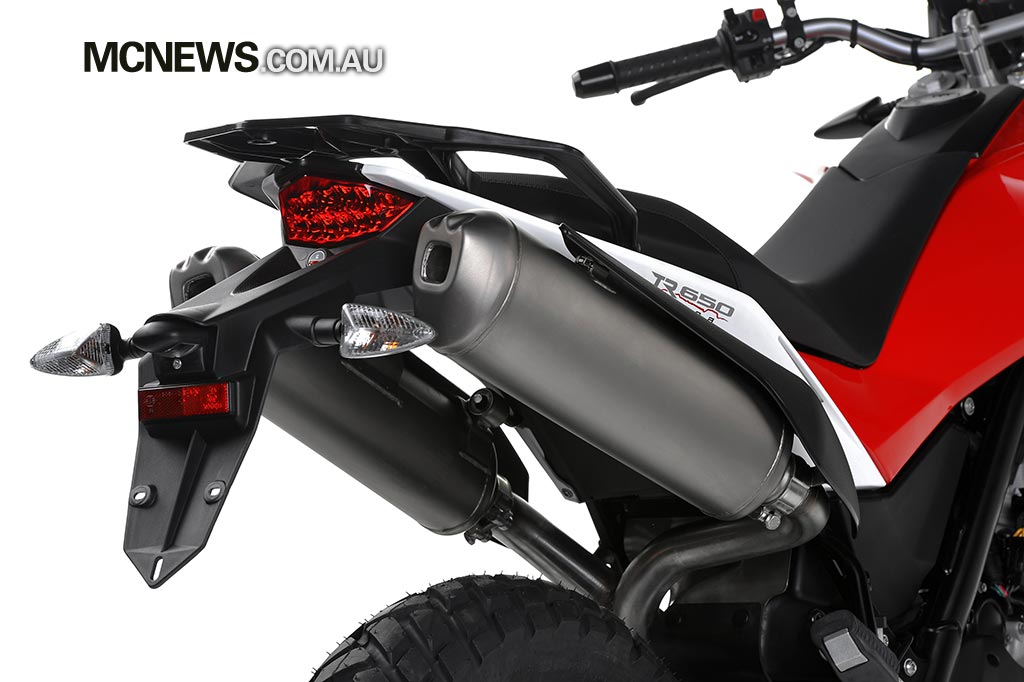 Clearly, as the more adventurous mount of the Husky TR650 pairing, it is the Terra that will also excite adventure-touring motorcyclists, and with good reason. First of which is the $700 saving in opting for the $8995 Terra over the ABS-equipped $9695 Strada. The second is the Terra’s more off-road oriented rim sizes and spokes over the Strada’s cast alloy wheels. The spoked rims will prove much tougher when the going gets rough when venturing off the beaten track.

Both machines benefit from that massaged, Chinese-built BMW engine that in Husky guise boasts 10 more horsepower, amassing 58 ponies at 7250rpm, matched to a well-endowed 60Nm of torque at 5750rpm. These are heady numbers for a single-cylinder engine, particularly one whose manners are so exemplary. Gotta love technology. Thanks to Mr Marelli (EFI) and the wonders of modern cylinder head design.

The engine is smooth and tractable enough for beginners while delivering plenty of wheel-lofting oomph for advanced riders. In standard form this engine is the best single-cylinder donk I have sampled, besting the more expensive options from Yamaha (XT660R) and a standard KTM (690 Enduro) by a fair margin, in every facet of performance and usability. Forget what you previously knew about powerful singles, this big 100mm piston pushes against an incredibly high, for a single, 12.3:1 compression ratio and makes big power, but is a complete and utter pussycat. It’s a seriously impressive powerplant, by any measure.

Chassis-wise the Husqvarna machines do feel a little more roadbike than enduro bike. A steel twin-spar frame is the backbone of the design with beefy 46mm Sachs forks handling the bumps up front, matched to a preload adjustable shock absorber from the same company. The forks offer no adjustment but handled all we threw at them with aplomb. Likewise, the shock coped admirably across riders of all sizes and the suspension package is fairly impressive, despite the lack of adjustment. The 186kg payload capacity is quite generous and I believe the Husky will cope with being loaded up with fuel and gear for an epic adventure without turning into a wallower.

Thanks to its larger rolling diameter rubber, the Terra’s seat is a fraction further from terra-firma than the Strada’s reasonable 860mm seat height. The machine is very slim between the knees and while those figures might sound unapproachable for some shorter folk I urge them to actually try the machines on for size as the slim profile allows the legs to reach straight down and make things easier. 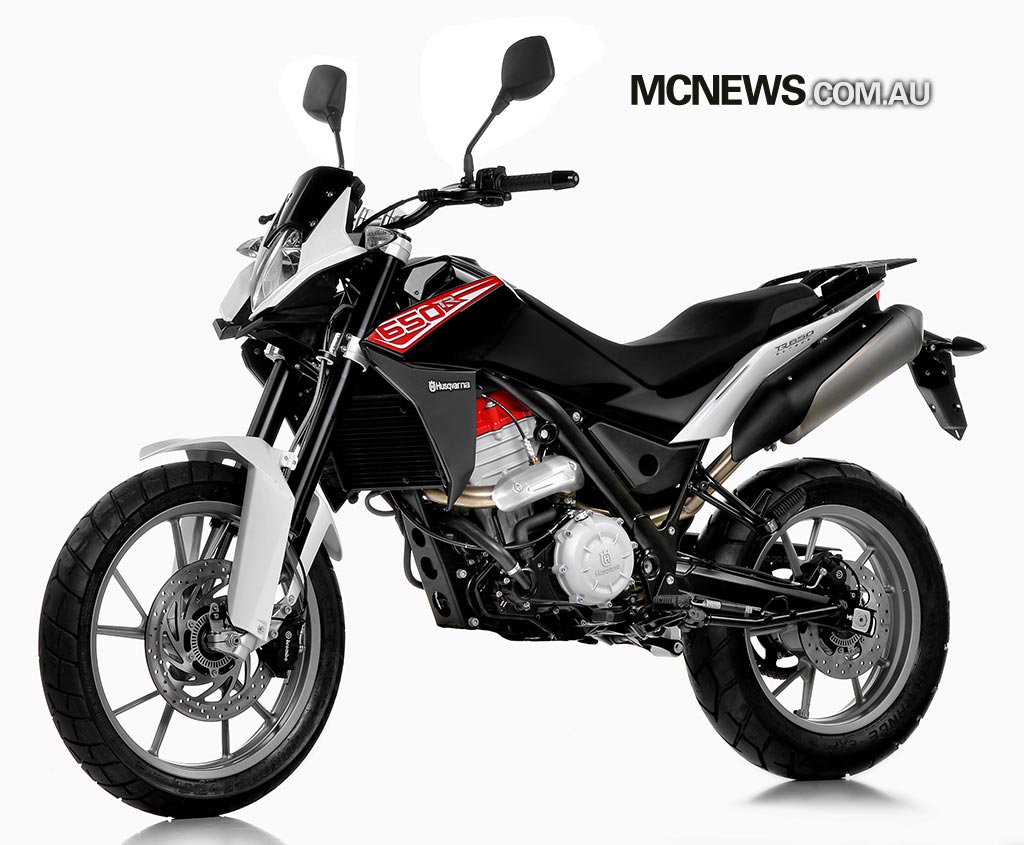 Husqvarna representatives declared that both models ride on identical suspension. I have reason to doubt that claim as from my perspective the suspension valving on the Terra seemed to firm through the mid-stroke much more positively than the Strada.

Off-road the Husqvarna machines feel a little less like a natural dirtbike than Suzuki’s DR650. Certainly more off-road ready than BMW’s G 650 GS, with an off-road feel a little like the German company’s Sertao edition of that model. The Husqvarna machines certainly feel more like a dirtbike than, say, Triumph’s Tiger 800, and as a result are much more manageable off-road. As impressive as the single-cylinder donk is though it does miss out on that rear tyre frying grunt of the multi-cylinder adventure tourers. That generally suits the sensible and $$$ conscious type that favours these smaller machines; the amount of money saved on tyre wear would be substantial. The more powerful machines have no trouble wasting a rear knobby in a single ride if you hit the throttle tube with a bit of aggression. That means $$$.

Due to the Husqvarna importers (Paul Feeney Group) tie-up with Pirelli the standard Metzeler Sahara (Terra) and Tourance EXP (Strada) tyres were replaced with comparable Pirelli rubber. While Pirelli make some fine rubber it must be said that the Metzeler tyres likely suit the machines much better. Most riders on test complained of headshake and stability issues across both bikes, with the Terra particularly nervous at speed, albeit at speeds that are probably not all that advisable. The ride leader, not a direct employee of Husqvarna Australia, swore to us that when he ran the machines in on the standard rubber there were no stability issues.

Braking components are provided by Brembo and are up to the task. A 300mm single disc up front is clamped by a twin-piston caliper suitably aided by a 240mm rear disc. The ABS system on the Strada is switchable and excellent in operation. The ABS system on the Strada is a latest generation system and as such is a fine system that is an asset to the machine. There is always an ‘off’ button if you prefer to deactivate the system in certain situations.

A 400-watt alternator is quite generous for this ‘tiddler’ level of adventure-touring.  A demonstration of access for air-filter servicing is included in the video further down this page.

Visually, the Husqvarna machines are finished to a higher standard than the BMW machines they are derived from. With a quality feel to the controls and attention to detail across all components they are fine looking machines. The Terra is the more striking of the two with its lush Husky red bodywork in contrast to the glossy black of the Strada, which rolls on exquisite 10-spoke alloy rims. Hmm, maybe the Strada is the better looking after all… For 9k these bikes are very easy on the eye and put their Japanese counterparts to shame.

The lack of handguards is an oversight and you will need to cough up some extra dollars on those and bash-plate options etc. from the Husky accessories catalogue, which is vast and fairly reasonably priced.

The riding position of both machines feels natural. All the controls are well positioned and the long seat gives plenty of room to move. The pew is a little slender, however, and while quite good for this class of machine, is not the ideal perch for long highway touring. Both machines sport excellent luggage racks and a passable attempt at pillion accommodations. Much better than the DR, but not quite as good as the KLR perhaps, but at least the Husky has enough engine to pull a pillion… And the suspension tune to have half a chance of keeping a pillion off the suspension stops over any hits.

Machines like the TR650 duo are not perhaps the most comfortable and well-appointed mounts for long distance, all-roads touring compared to the big jiggers like BMW’s R 1200 GS, KTM’s Adventure and Triumph’s Explorer etc. The Husky is, however, infinitely more manageable off-road for those with limited dirt experience, while also possessing the agility to take a skilled rider across any terrain imaginable, at speed.

Plenty of hip-pocket-nerve conscious buyers will happily forego the creature comforts of the big adventure-touring machines in favour of the affordable and relatively lightweight Husky. That’s why there are already thousands of happy punters on KLR650s and DR650s out there clocking up massive kilometres across all sorts of terrain.

In the Husqvarna TR650 machines, that pair now have some real competition, and unlike those long-running and very long-in-the-tooth stalwarts of this class, the Husky benefits from the latest engine design and technology smarts to overwhelmingly make their competitors look even more old hat than they already did. At a price point that hopefully will force the Japanese brands to sharpen their pencils further, revisit their own pricing strategies and offer even more value to buyers. That sounds like a win-win scenario all round to me…