Indeed, Bardney-based Lintin was in imperious form around the 2.43-mile woodland circuit all weekend and won six races from seven starts, also claiming the David Jefferies Cup and Lee Pullan Trophy. In addition, he claimed a new lap record in the Supertwins class and set new personal bests on his 1000cc and 600cc Taylor Lindsey Racing Honda’s, his time of 1m45.385s on the former making him the fourth fastest rider ever around the circuit.

The Gold Cup victory, his first International victory on a 1000cc machine, came in Sunday’s final race and he was never headed from the moment the lights turned green. Completing the first lap half a second clear of McGuinness, Ivan lapped consistently quicker than his rival and was able to control the race from the front to take a famous win and follow in the footsteps of illustrious names like Barry Sheene, Carl Fogarty, Giacomo Agostini, Phil Read, Geoff Duke, David Jefferies and fellow Lincolnshire riders Guy Martin and Roger Marshall, all previous winners of the trophy.

The 29-year-old had already laid down two markers with a victory in each of the Superbike races held on Saturday and Sunday, the latter in particular impressive as he saw off the close attentions of Lee Johnston with the aforementioned new personal best lap.

Johnston proved to be Ivan’s main rival in the Supersport 600cc class and the duo had close battles in each of the two eight lap races. Johnston led for five laps in Saturday’s race before Ivan overhauled him at the start of the sixth with a surprise move along the start and finish straight and, with a new personal best lap of 1m46.997s, just 0.2s outside the lap record, he eventually ran out victor by three seconds. Sunday’s race was closer still but, having led from the start, Johnston squeezed by Ivan with less than half a lap to go and it proved to be his only defeat of an otherwise perfect weekend.

His other race victories came in the two Supertwins races on the Tigcraft Kawasaki, the first seeing him lead from start to finish and also set a new lap record of 1m49.944s,the first sub-1m50s lap in the class. Sunday’s encounter saw him occupy third place in the early stages but once he hit the front on lap four, he was able to pull clear for yet another high class victory.

Ivan Lintin: “I can’t really fault the weekend at all and to cap it off with victory in the Gold Cup race, my first International race win on a 1000cc machine, is brilliant. When you look at some of the names on the trophy, I’m in some high class company and whilst I wouldn’t put myself in the same category with some of those riders, it’s nice to have got the better of people like John McGuinness and Bruce Anstey, two road racing legends, today.

“My plan was to get my head down for the first two to three laps to break away from John and it worked a treat. Once I’d got a nice gap, I was able to ease off slightly and control the race from the front.

“It would have been nice to have taken seven wins from seven starts but I just ran a little bit wide on the exit of Mountside Hairpin on the final lap of Sunday’s 600cc race and the bike bogged down a bit, which allowed Lee to edge ahead going into the jumps. There was no time to retaliate but, like I say, I can’t complain one bit about the weekend.

“All three bikes were impeccable and to end the year with a weekend like this, with race wins and personal bests in all three classes is superb. It’s been a fantastic year for me and I’ve been able to make good progress across the classes and climb further up the results sheets so massive, massive thanks to everyone at Taylor Lindsey Racing, McKinstry Racing, Tigcraft Kawasaki and all of my other sponsors for making it all possible. Roll on 2015!”

John McGuinness was reunited with his Valvoline Racing by Padgetts Honda team at Oliver’s Mount, Scarborough over the weekend and the Morecambe ace made sure it was a successful reunion around the tricky woodland circuit with three top four finishes on the Superstock Fireblade, the highlight of which was an excellent second place in the feature International Gold Cup race.

John McGuinness: “I’ve been coming to Oliver’s Mount since 1996 and try to support the Gold Cup event as much as possible so it’s great to have come back this year and have another go.

“My wrist is getting better all the time but the bottom line is that I’ve done hardly any racing this year and I’m way behind everyone else in terms of fitness and being race sharp. I wanted to be competitive this weekend and although it was tough going to begin with, I’ve quickened my pace with each and every outing.

“I’m pleased with the outcome and with three top four finishes, including two podiums, from my three races, I’m happy enough.

“I gave it a real good go in each race and set my fastest lap of the weekend in the Gold Cup race but there was no stopping Ivan this weekend. He’s been quietly going about his business, improving his results each year and it’s great to see him rewarded with a major road race win. I’ve really enjoyed working with Clive and the whole Padgetts team again so it’s definitely been a case of ‘mission accomplished’ this weekend.”

Ryan Farquhar also  ended his 2014 road racing season at Oliver’s Mount and the Dungannon ace made sure it was a successful one with two more wins around the 2.43-mile woodland venue, this time on the Team York Suzuki 1100cc machine.

The weekend didn’t get off to the greatest of starts though when he was forced to retire the SGS International/KMR Kawasaki from third place on lap five of Saturday’s Supertwins race but the rest of the day went well. Riding the same 1100cc Suzuki that Russ Mountford took to third place in last month’s Classic F1 TT race, Ryan took a good win in the Superbike B final, coming home 8.1s clear of Chris Cook, and he rounded the day off on the same bike, finishing a solid second to Jamie Hamilton in the Classic Superbike race.

Sunday saw slightly cooler conditions but with Hamilton crashing out at the end of the first lap of the second Classic Superbike race, Ryan had a comfortable 12.7s victory over Davy Morgan to make it 103 wins in total at the venue. It looked like he’d make it 104 later in the afternoon when he led the Superbike B final by over three seconds as he started his final lap but a broken gear linkage thwarted him and he was overhauled by Tom Weeden with the chequered flag in sight, therefore having to settle for another second place.

Ryan Farquhar: “It’s been a mixed weekend here at Scarborough with good results on the big Suzuki offset by problems with the Supertwin bike. I was trying a new engine spec and although it was making some really good power on the dyno, it didn’t have the punch out of the corners I needed. With three hairpins at Oliver’s Mount, I was losing too much time on each lap and was fighting a losing battle so I opted to pull in and save the engine. There’s plenty of work to be done over the winter with the bike to get us back at the sharp end and I’ll get cracking as soon as possible to make sure we’re stronger next year.

“On the plus side, I’ve really enjoyed riding the big Suzuki this weekend so a big thank you to Kevin and the entire York Suzuki team for the loan on the bike. I had some really good races on it although I was having a few wee problems changing gear and the gear linkage falling off on the final lap was what cost me my third win of the weekend. I still added another two wins to my total though and enjoyed myself at Scarborough again so I’ve ended the road racing season on a good note.” 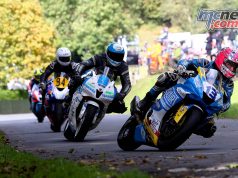 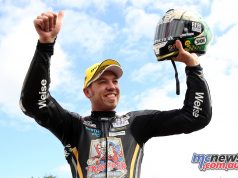 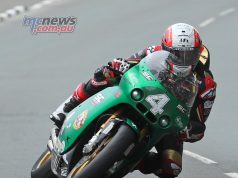