Miller rode brilliantly with his new team, starting third on the grid and running at the front with Marquez from the start as pole man Alex Rins (Estrella Galicia 0,0) made a poor start and dropped to 12th.

Miller and Marquez then battled for the lead but a late mistake from Marquez let the Australian in on the last lap for his first victory and first Grand Prix podium. Behind the leading pair Vazquez crossed the finishing line just 0.047s off second place to complete the podium and step onto the rostrum for the first time since 2011.

Miguel Oliveira (Mahindra Racing) was the best of the seven Mahindra equipped riders in the race, missing the podium by just 0.015s in fourth. Rins incredibly got back up towards the top three having been stranded way down the field on the first lap and he too was just a fraction behind Oliveira in fifth.

There were also crashes for Niklas Ajo (Avant Tecno Husqvarna Ajo) and Juanfran Guevara (Mapfre Aspar Team Moto3), but all the riders were ok.

Australian Jack Miller took line honors in the opening Moto3 World Championship race at the Losail Circuit in Qatar, the first of 18 rounds of the competition. It was the 19-year-old Australian’s first Moto3 win and was a great debut with the Red Bull KTM Ajo Factory team.

Miller who had a front row start swooped to the front at the start of the race shadowed by Spaniard Marc Marquez. The two riders then settled down to swap the lead back and forth and at one point had a 3.5 second lead on the rest of the pack.

Behind the leaders a battle raged for the minor podium place with engagement by no less than five or six riders. The group narrowed the gap to the two leaders to less than a second in the closing laps setting up what was to be a thrilling final dash to the line.

Miller who before then race had pledged to be patient and go for the maximum points, played his hand well. Going into the final corners the Australian was perfectly placed to capitalize on a small mistake by rival Marquez. Marquez went wide in the corner, Miller quickly grabbed the advantage and went on to take line honors and pick up maximum points in the opening round.

Immediately after the race, an excited Miller said he had gone all out in the final lap. “It was pretty scary going into the final lap because the tires were more worn than I expected them to be. But I just gave it my all. We couldn’t have asked for anything better. It was a really good first race. its a great way to start the season, but its that. Its the start. We still have a long way to go and I still have a lot to learn.”

Miller’s teammate Karel Hanika, who won his berth in the factory team after taking victory in the 2013 Red Bull MotoGP Rookies Cup rode a solid race from nineteenth position on the grid to finish in thirteenth place to pick up his first world championship points in his debit race. Both riders are on the KTM RC250 GP machine.

Factory team boss Aki Ajo said it had been great to start the season with a win but underlined it would be a hard fought competition in 2014. “It will be really tough in the small bike category but somehow also very interesting. The tough competition between the manufacturers makes it more interesting for everyone and for us it is even more motivation to work even harder. Never give up!”

The first of the 18-round competition for the 2014 Moto3 World Championship set the scene for what will be a hard fought battle for the title this season.

Moto3 Standings after Round 1 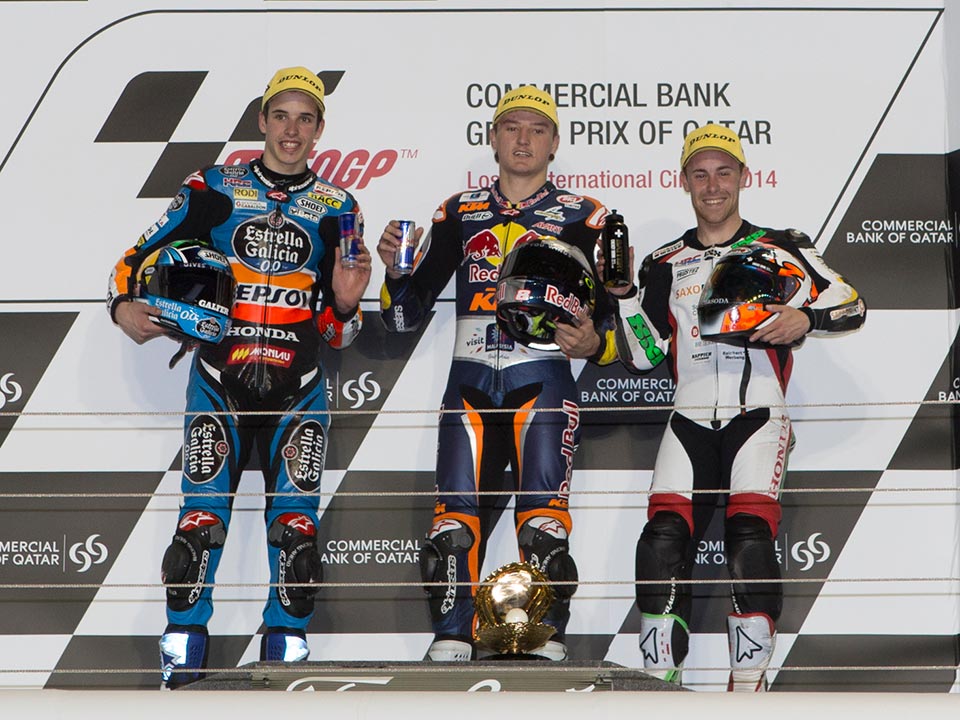 British rider Danny Kent rode a solid race in the opening Moto3 GP of the season under lights at the Losail Circuit in Qatar to finish mid pack at thirteenth place to pick up the Red Bull Husqvarna Ajo Factory Team’s first ever world championship points.

Kent, who returns to Moto3 after a year away in Moto2 in 2013, had a second row start and got away well to be in third going into the first corner. He held onto a top five position for the first third of the 18-lap race but then slipped down the order to ride it out swapping between places 13 and 14.

The British rider was disappointed with his result but remains confident for the rest of the season. “ I was able to get a good start but I just wasn’t aggressive enough in the opening laps,” Kent said. “Luckily it is only the first round. It’s a long year and now we know our weaknesses so we can work hard in the next two weeks to try and improve for the next round in Austin.”

Factory team manager Aki Ajo: “It was the first race for Husqvarna and it could have been better for the team but I am quite confident that in the next races Danny has a really good chance to fight in the top positions and even for the podium.”

Kent and Husqvarna supported rider Niklas Ajo, who crashed and rejoined the race to be classified at 26th position are both riding the FR 250 GP Husqvarna machine.