Byrne claimed the opening race win of the day in front of a packed Cadwell Park circuit, forcing his way through on Haslam at Chris Curve on the final lap to emerge victorious by just 0.272s.

Byrne had initially hit the lead but only marginally from Haslam with Richard Cooper and Jason O’Halloran tucked in behind. The JG Speedfit Kawasaki rider wasn’t prepared to sit in second place though and made a dive down the inside at Park to take the lead on lap one.

The battle for third was intense between Cooper and O’Halloran and on the third lap the pair traded places three times before the Honda Racing rider emerged ahead. The Australian then had his sights set on the pair ahead and he hunted them as he bid for a podium finish at the team’s home round.

Lee Jackson was running inside the top six when he crashed out unhurt at Charlies, but at the front Haslam had a moment which dropped him back behind Byrne and O’Halloran. He was soon fighting back though and moved back into second just two laps later.

Dan Linfoot had his race ended prematurely when he crashed out at the Chicane unhurt, losing ground in the battle for the top six in the Showdown as the chasing pack bid to catch up ahead of the Oulton Park decider.

Tommy Bridewell was carving his way through the field and by the end of lap eight he had made a move on Cooper with a decisive move through Hall Bends.

Haslam regained the lead on the ninth lap and he held the advantage from Byrne and a gaining O’Halloran, but the championship leader was pushing to make a move. He waited until the final lap and made a lunge down the inside at Chris Curve which was enough to move to the front and then fend off the counter attack until the finish. O’Halloran scored a podium finish at his local round after defending hard against Bennetts Suzuki’s Bridewell.

Haslam was fired up for race two after missing out in the opener and he delivered a Cadwell Park master class to be crowned the Monster Energy King of the Mountain with a strong race two victory to equal the score with race one winner Byrne.

O’Halloran had fired off the start line to lead the pack for the first time from Byrne and Haslam in close contention with the pair forcing him back to third in the early part of the lap, but the Nissan GT-R Safety Car was deployed when Howie Mainwaring and Fillip Backlund crashed out at Coppice, although both riders were able to walk away.

When the race resumed on the fourth lap Haslam instantly attacked arch rival Byrne, but the Be Wiser Ducati in true gritty style was straight back underneath him to retake the position. A lap later and Haslam again regained the lead and Byrne made a mistake which allowed O’Halloran to move back into second as the trio diced frantically at the front.

Haslam was on a charge and he continued to push at the front despite the pressure from O’Halloran and Byrne with the JG Speedfit Kawasaki rider saving his best until last to edge a two second gap over the final laps.

O’Halloran was fending off Byrne and despite a huge moment on the exit of Barn with three laps to go, he was able to keep the championship leader behind him to celebrate a double podium finish for the Honda Racing team. 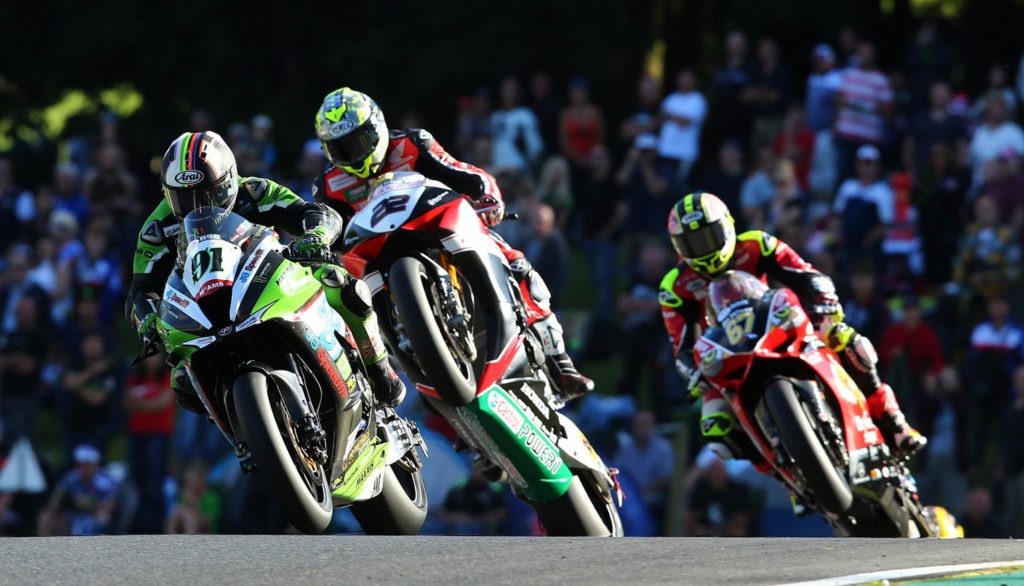 JG Speedfit Kawasaki’s Peter Hickman pushed through the order to claim a strong fourth place at his home round after getting the better of Bennetts Suzuki’s Tommy Bridewell who again closed down on the top six with a fifth place.

Dan Linfoot bounced back from his race one crash to claim sixth place to maintain his position in the top six ahead of Oulton Park with Glenn Irwin again in the top ten on the second Be Wiser Ducati in seventh place, holding off James Ellison.

Luke Mossey and Jake Dixon completed the top ten with the focus now moving to Oulton Park on two weeks’ time for the Showdown decider.

Billy McConnell tussled with John Hopkins and Michael Laverty to bring home three championship points in each race after carding a pair of 13th place finishes.

“In race one I didn’t really have a master plan to be honest. About six laps from the end I got a netural going into the final corner; I had been watching Leon, but it caused me to go really wide and that let Jason get ahead of me. He was riding really well and I thought ‘this wasn’t part of the game plan’ but I got back in front of him. I knew if I hadn’t passed Leon by the Mountain it was going to be really tricky. Leon was smart in the race, but I followed him and at the end I wanted to put a spanner in the works and I did just that. I was surprised with race two as the bike was the same as in race one, but the bike was moving around a lot and that made it difficult. The boys are sussing it out, but Jason and Leon rode fantastic. For me to have not won a race here at Cadwell Park in 13 years, so to win one and then back it up with a double podium makes me happy. We are in the Showdown now and we can look forward to Oulton Park.”

“We knew the bike had the pace and that we would be strong here. After race one we knew we would have to do something different in the second one and we managed it the best we could and the plan worked perfectly. We tried to slow the pace up to help save the tyre towards the end of the race and I managed to do a good pace at the end. It has been a tough few rounds but to beat Shakey and go into Oulton Park with our heads high is good for us so we can finish the season hard. I have raced all over the world and there is no better place than Cadwell Park. The circuit is so unique and hard to ride but the fans always come out in force so when you win here it makes it all that much better.”

Lydd’s Bradley Ray made it a double win at Cadwell Park, after battling back from a slow start to the race with Gearlink Kawasaki’s Mason Law in second and James Westmoreland in third.

Law grabbed the holeshot from second on the grid, with Ray dropping back to third place behind Luke Jones. Ray made his move on the second lap at ‘Park’ corner on Jones, then on the next lap the Triumph man (Jones) highsided on the exit of the same corner, with Andrew Irwin hitting the stricken bike.

Ray then got his head down and clawed in the leader Law, and on lap five he took the lead from the Gearlink Kawasaki man and started to pull a gap on the current National Superstock 600 Champion.

The battle for third was then hotting up between James Westmoreland and Andy Reid, and on lap ten Reid ran on at the first turn and had to rejoin the race in eighth place. However, the next lap the Quattro Plant Cool Kawasaki Northern Ireland rider was forced to retire from the race, leaving Westmoreland in a comfortable third place.

Back at the front Law started to look to bring Ray back into his grasp, and after knocking the gap down to three tenths of a second, the FAB-Racing Yamaha man pulled the pin and by the final lap he had increased the gap back to over seven tenths of a second and crossed the line to take his second win of the season.

Tyco BMW star Ian Hutchinson dominated the Pirelli National Superstock 1000 race at Cadwell Park, cruising to victory by 2.3s. It was Championship leader Taylor Mackenzie who grabbed the holeshot to lead the opening lap, however ‘Hutchy’ immediately retaliated on the second lap to take the lead. Pulling out a gap ahead of the chasing pack, the Nissan GT-R Safety Car was deployed on lap four which meant Hutchy had to do it all again when the race resumed one lap later.

Farmer held second for the majority of the race, with Mackenzie third, however those places were reversed on lap 13, where they would remain until the flag.

Moto Breakers Racing star Keenan Armstrong took his first win of the season at Cadwell Park, as a red flag following a crash from series leader Carl Phillips brought it to a premature finish. It was an action-packed nine laps, as Jones took the holeshot, however it was Armstrong who wrestled the lead back to cross the line at the end of the opening lap first. Maintaining that lead ahead of a fast-charging Harry Truelove and Jordan Weaving until a crash from series leader Carl Phillips on nine saw the red flag deployed and the result declared. Although Phillips was able to walk away uninjured from the crash, another podium from Weaving has seen him take the Championship lead.

Joan Mir without crew chief at Portimao after positive test