In perfect sync with the sunrise this morning, the first riders took off to tackle the Red Bull Romaniacs race track for Offroad Day 2. The mechanics and coaches of the professional riders warned their athletes to go easy for the first several meters, the grass still wet from the morning dew.

After that, their instructions were to go “wide open” on the well marked and used tracks, which are the classic playground of the Sibiu local Enduro community.

Unfortunately Chris Birch (NZL, KTM) took that advice too literally and while cruising in 4th gear had a nasty high speed crash. With a damaged bike and feeling a bit dizzy, he decided to play it safe and quit while he was ahead. As he left the track towards the Service Point, Chris was spotted helping Silver class riders up a difficult section.

Aside from a few bad bruises, Birch is okay, but has now pulled out of the event. Birch had been running eighth but with him now out of the event the top ANZAC rider is Shane Moss in 27th position.

Setting off overly eager onto the track caused another problem for some of the riders this morning, among them yesterday`s stars Andreas Lettenbichler (D, KTM) and Graham Jarvis (UK, Husqvarna). They took a wrong turn at an intersection splitting the Gold and Silver class from Bronze and Iron. Navigating only by the track markings and not watching their GPS, they missed a Gold-loop.

Jarvis somehow realized the mistake and turned back, while Letti continued and missed the checkpoint, along with a few other riders. All of whom received penalty times.

When Letti arrived at the finish, he commented: “After I realized, that I missed a checkpoint, I just continued the race on my own rhythm. We will have to see how much of a penalty I receive tonight and decide what that means for the rest of the race.”

A bad day for the Bavarian and a pity, since he appears to be in top shape. As if the day hadn’t gone bad enough already, Letti also front-flipped down a hill later during the race. His son Manuel (D, KTM) also got to taste some Red Bull Romaniacs pain and arrived quite tired and sore at the finish. But he was in good spirits and happy about his result for the day (11th, arriving a good hour past the leading Walker!).

Jonny Walker (UK, KTM) seems to have been right about writing off yesterday as a “bad day” and moving forward. He was on fire and dominated the race from start to finish. After his third place yesterday, Walker started the morning chasing after Jarvis, who started six minutes ahead of him. In the faster morning sections, he managed to gain significant time on Jarvis and eventually catch him.

Jonny Walker – “I got myself back in this race with a win on day two. I knew I needed to pull something out of the bag after yesterday’s rookie mistakes so today was full attack mode for five hours. You get good days in the mountains at Romaniacs and today was one of them.

“I closed in on Graham pretty quick after the start and we rode together until the final 30 minutes of the race.

“A few times I tried to breakway but he was ready for it, then I gave it another shot and managed to pull a gap.

“It feels sweet to be leading this race now and I’m pumped to start tomorrow first on the road. Looking forward to what day 3 will bring!”

Walker and Jarvis then started riding in direct competition throughout most of the day and through the hardest parts. Both cleared the most extreme sections in almost identical times and notably faster than anyone else. Walker later started making an effort to pull away from Jarvis, only succeeding in the final fast stretch.

Another rider to endure a tough Red Bull Romaniacs day was Alfredo Gomez (ESP, Husqvarna), who is still struggling to find his groove. After some wipeouts he ended up losing his GPS while pushing his bike through a difficult section. With the GPS well hidden in some mud, Gomez lost serious time searching for it. Later, his Camelbak malfunctioned and he again lost time trying to fix it. His sister Sandra continued to perform solidly and finished with an impressive 7th place in the Bronze class.

The Red Bull Romaniacs Silver class were in for a bit of a relief after yesterday’s “in your face” kick-off and made it to the finish in reasonable times and good moods. The Bronze class kept cruising along, still not knowing why they are spared the major pain, while the Iron class got their first taste of “tough” today. In general, the mood of the majority of the riders can only be described as “ecstatic” upon arrival in the spectacular finish area. There, in front of a cheering crowd, they had to master their last challenge of the day: Crossing the wallride over the Cibin river in Sibiu and arriving back on land. The wallride appeared to have been quite intimidating to the riders but most welcomed by the crowd. Many riders entered the onramp carefully and with worried faces – only to realize that it was not nearly as bad as it looked. Therefore emotions erupted after crossing the finish line and many jumped into the river for a welcome refreshment, some involuntarily. At the end, the ruts exiting the water grew deep enough to almost completely swallow the enduro-bikes. 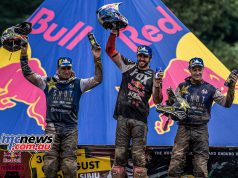 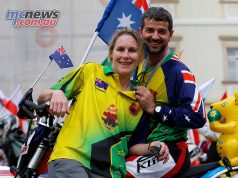