Ride Rage Radio this week spoke with Josh Hook and with their permission we have produced this transcript from the audio recording.

RRR: Apart from the return of national level road racing to South Australia, it’s also the return to action from one of Australia’s most exciting young Superbike riding prospects, I’m speaking of course of the new Taree Terror Josh Hook, he joined us on the line today. Josh, well, firstly, it’s going to be great to see you back at the track, first time back at Mallala for quite some time for both you and the Australian Championships, with the return of the Swann Series down there at Mallala.

RRR: You were down there at the first round at Wakefield Park, unfortunately still sporting those injuries from the first hit out for you on the 2014 Fireblade, the brand new SP model at the Phillip Island World SuperBike round, where you hurt yourself. You were there watching from the sidelines at Wakefield Park. First of all, how hard was that and also how hard was the racing?

Josh: Yeah, I mean, Wakefield looked like for me, one of the hardest events in Australian Superbike history, in my time anyway, so just qualifying alone was just unbelievable and stuff like that. I mean, the racing there was so close and guys battling for the win that you’ve never seen up the front before, so it was definitely a great round there and it sort of killed me a bit to be watching, but it was also good to be there.

RRR: Now you’ve had the opportunity to head down to Mallala, do a test on the Fireblade only your second time on it this year, how did you handle it after the big layoff? Only half a second off the place too, I might add.

Josh: I was a bit rusty, at first, I mean I had been off the bike for three months, we started off the season really well.

RRR: Yeah, I think the first Superbike win at national level is probably a fair way to start off the year.

Josh: Yeah, it was good and with myself in the team, we were happy with how we started and it was just unfortunate that I had a crash and got injured, but these things happen. We’re just gonna focus now finding our feet and getting back into a good rhythm and the team and I seemed to find the rhythm there at the tests, we’ve got a few things to tidy up on, but I think when we race with those guys, the lap times will come.

RRR: I think probably the other interesting thing is going to be the, well not only the amount of time that you haven’t been down there at Mallala, Josh, but the fact also too that the last time you were there you were on a Moriwaki 250, that might be a little bit different lines and way to attack the Mallala circuit than on a firebreathing CBR1000 SP.

Josh: To be honest with you, it’s been that long since I’ve been there, I kind of just forgot which way the track even went, so I was pretty much learning the track again, so that wasn’t too bad, you know. We were on the pace fairly quickly down there and having Jamie and Wayne on the team too, setting the pace from the word ‘Go’, didn’t make it easy on me to see those guys sort of fast straight up and for me just still trying to find my feet, like I said, I was a bit rusty when I first got on the bike. But we had two days full testing there, so we covered a fair bit of ground and we’re moving forward, which is amazing.

RRR: And I guess another thing that’s certainly not in doubt is your level of physical fitness, because I know that you’ve been training incredibly hard, doing a lot of Ks on the push-bike to build up your fitness, which is what you’re going to need to be able to run at the front with those guys and the pace that they’re doing at a very technical and hard circuit like Mallala, for a rider a lot of physical input required.

Josh: Yeah, it’s a fairly demanding track there at Mallala, I mean it’s not the smoothest surface and there’s a few link-up sections there and hard braking areas too, and some faster turns there, so it’s a combination of a lot of different corners, and it’s going to be interesting, that’s for sure. I mean, it’s a good track, from the tests there I started to like the track and not too far off the pace, which is good. So I’m looking forward to this weekend, I think we can go out there and be on it straight up, we just hope it’s good weather and see how it goes.

RRR: Is it also fair to say, Josh, that you have a reasonably high level of confidence. Because the last time you were actually on the bike you carded your first national superbike win down there at Phillip Island?

Josh: Yeah, and even from the tests there at Phillip Island before the Superbike round there and all through the practices there and over the weekend, you know I was fastest in every session, which was a massive confidence boost for me and to be faster than the guys that I’ve looked up to and raced against last year, that were smoking me, and so it’s good to come back and start a year off so good. So that definitely helped my confidence and I think at the moment I just have to be patient, because the pace will come, it’s just that you kind of get stuck out, because you’ve been off the bike for so long and then you’re supposed to come back and be running at the front. So I just need to relax and the pace will come, I just need to take it as it is.

RRR: Can’t wait to see you in action on Friday down there at Mallala, best of luck for the weekend Josh and I look forward to catching up with you on Friday in the pits. 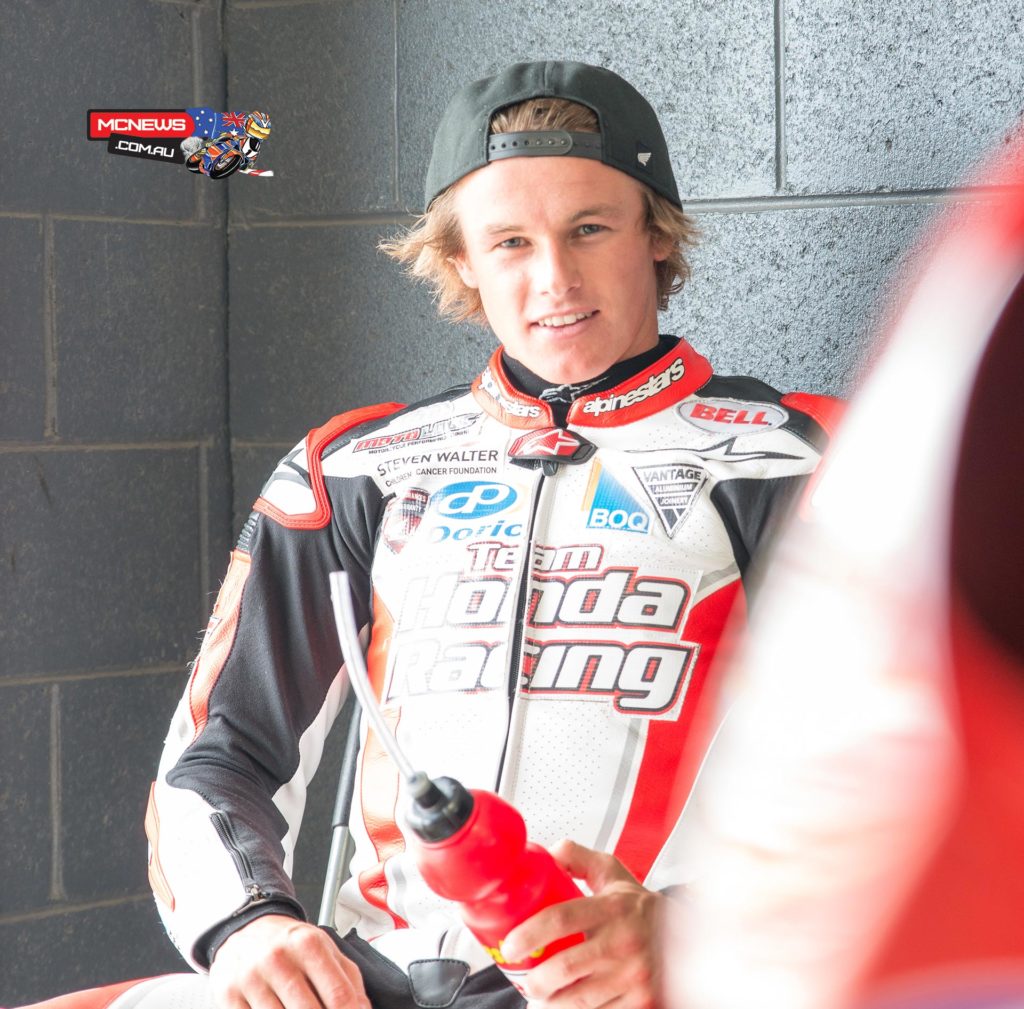