Josh Waters Blog – Emailed to us from Suzuki Press

Tyco Suzuki’s Josh Waters reflects on an exciting and dramatic few weeks that has seen him capture runner-up position with the Yoshimura Suzuki Team at the Suzuka 8-Hour race in Japan and also his second British Superbike win at Assen last weekend.

The last few months have really been busy for me. Since I last touched base I’ve won two British Superbike races, finished second at the Suzuka 8-Hour and each meeting in BSB since then I have been improving week-on-week; which has been great for everyone at Tyco Suzuki.

The lead-up to racing at Suzuka was busy as I flew over to Japan in between rounds of British Superbike for testing. This year I was back racing for Yoshimura Suzuki; which I was really excited about. It was actually my third year racing for Yoshimura at this famous event, but this year was very special for Yoshimura Japan as it was their 60th anniversary.

It was a huge honour to be asked to compete and for this year’s event Yoshimura ran two teams: Yoshimura and the Yoshimura Legends’ team. My team-mates were Randy de Puniet and Takuya Tsuda who were both really fast and great to be teamed-up alongside.

Both of the boys are Suzuki MotoGP test riders so it was cool to ask them questions about Suzuki’s MotoGP bike. The other team was called Yoshimura Legends and legends they really were…

Kevin Schwantz led the team and he was such a nice bloke. His 1986 Suzuka 8-hour team-mate Satoshi Tsujimoto was also on the Legends’ team along with my good friend Nobu Aoki. In between testing in Japan, both Randy and myself went and visited Nobu and his family and friends at Nobu’s house, which was really cool. I really enjoy Japan, so I had a great 10-days over there preparing for the big race.

After testing at Suzuka, I raced back to England as we had the fifth round of the British Superbike Championship at Brands Hatch up next. I was looking to improve things that weekend but struggled a little in race one.

For race two the heavens opened and I really clicked with the Tyco Suzuki GSX-R1000 in the wet conditions. As you all know, we were able to go and get the win. It was great to give the team something to celebrate after a tough start to the year.

The following morning I was back on the plane to Japan for the Suzuka 8-Hour race. I was really looking forward to Suzuka, although it was very tough as it’s so hot out there. Qualifying went really well: our team was right-up there and all three of us were very close in lap times.

In Superpole my team-mate Takuya Tsuda did an amazing lap and we were to start the race from Pole for Yoshimura Suzuki. Just before the race was about to start, it poured down. Takuya started the race for us and did a really good job in his first stint.

I was up next and by the end of my stint we were up into the top-three which I was pretty pleased about. Halfway through the race we were up to second, but had a little bit of bad luck with safety cars on the circuit; which made it very hard for us to challenge for the win.

I rode the final stint and it was a great feeling to cross the line in second place at such a famous event.

It was then back on the plane the following morning and straight back to England to compete in the next round of the British Championship – no rest for the wicked and no big night out to celebrate; just airport food and another long trip, but I’m not complaining.

Since racing at Suzuka I have to be honest and say, I’ve been a lot happier with my pace week-in-week-out on the Tyco Suzuki. At Oulton Park I was in the top-10 in all three races, which I was happy about; then at Cadwell Park – which is not exactly a GP-type circuit – I was in the top-five in both races, so I’m not complaining.

Then at Donington Park I was in the top six in both races and even started race two from pole position.

Assen was just last weekend and it was the first time I’d even seen the Dutch circuit, never mind ridden there.

Race one was run in tough conditions; as it poured down about 20-minutes before it got underway. Again the Tyco Suzuki team delivered the correct settings into the GSX-R1000 Superbike and I felt really good out there; that good I was able to get my second race win of the year. The final lap was a great battle with Kiyo and when he came past, I reckon everyone expected me to fold, but I wasn’t prepared to give-up the win, as second-place at that stage would have meant huge disappointment for the whole team.

In race two we got a poor start but a top-10 was a decent-enough result in the dry around a new circuit for me; which just leaves Silverstone and Brands Hatch GP to close out the season.

The plan is to finish-off the year as strongly as possible on my Tyco Suzuki. I’ve been enjoying myself more and the atmosphere in the team after the win at Assen was great, so I’ll doing my best to give the boys another one before the end of the season.

I’ve been getting a bit of ‘stick’ as they say in Northern Ireland about becoming the new BSB ‘rain master,’ but my dry results on a great bike have improved dramatically from last year and with my confidence building I’m hoping we can get closer to the front in these last five races once again.

Thanks to everyone for their support! 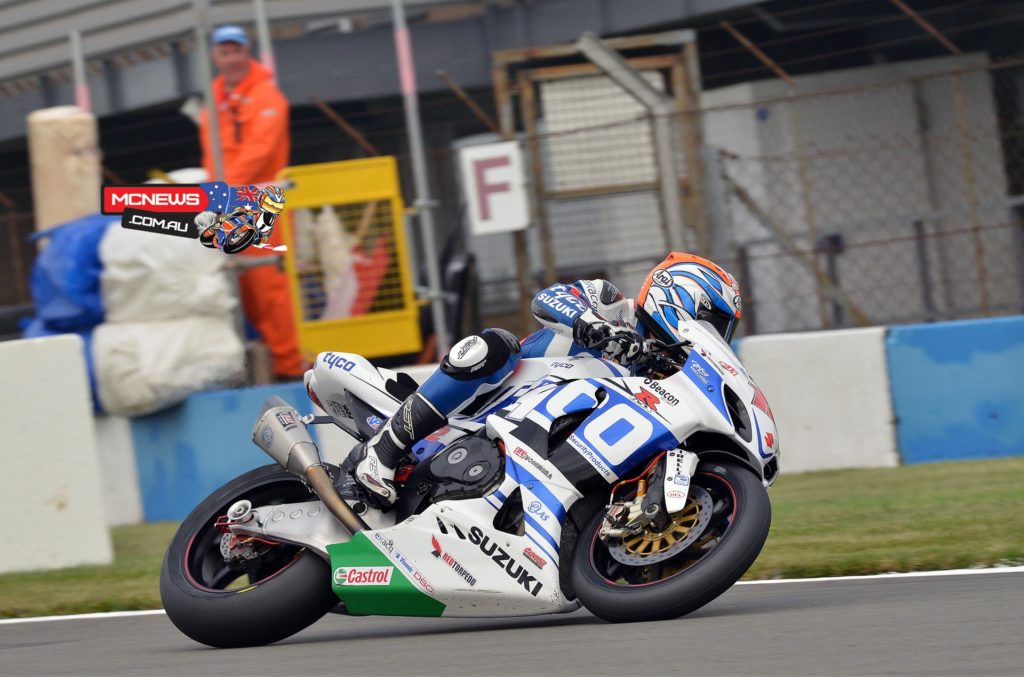