And now for something different – a spin on the new 2010 KTM 450 SX-F. This was my first real hit out on a current generation orange motocross bike and something that I had been looking forward to for quite some time as I knew KTM had come a long way since I last climbed aboard a machine from the Austrian manufacturer.

The testing venue was Terry Hayes’ Racetech suspension test track. A great venue to put the 450 SX-F to the test and provide me with an understanding of where this bike fits in compared to the Big 4 Japanese machines.

For 2010 the KTM received a swag of improvements over the 2009 model, both in the engine and the chassis department.

A new five-speed gearbox based on the popular cog swapper used in the XC line but shortened up a bit to suit Motocross circuits.

The factory Akrapovic pipe that is fitted to the 2010 KTM 450 SX-F employs a noise resonance chamber as standard. Although the header pipe looks like it’s a factory bolt-on performance part, its primary purpose (as stated from KTM) is to reduce sound while not affecting power. With most race tracks around the country now starting to become very strict on noise levels, this can only be a positive move and one that all the manufacturers will have to start taking notice of.

KTM has put more changes into the chassis department for 2010. With new triple clamps fixed at 22mm offset, KTM are chasing less twitch at high speeds. The frame at the head tube has been dropped by 10mm and this combined with a 4mm shortened shock gets the KTM chassis closer to the wheels and lowers the centre of gravity. This is aimed at increasing stability and to help absorb impacts. The forks also come in for some re-valving with stiffer settings.

When you climb aboard the KTM you notice that the bike feels somehow more substantial. The cockpit feels roomy and nice ergonomics make for a positive feel. There is also ample adjustment for the all riders with reversible bar mounts and Renthal crossbar less fat bars fitted as standard.

The KTM has a feature that I wish all the motocross bikes came with….electric start! This is a bonus the Kato has over any of the other motocross bikes I have tested. It doesn’t matter how good the injected Japanese bikes are at starting these days, there is one small problem, you still have to kick them! A simple press of the little red button is all that is needed to fire up the Orange 450. The benefits of this button in race situations would be obvious. Fall over, get up and press a button, rather than use another 15 minutes of energy kicking the crapper out of a non-electric start machine.

Another notable difference to the Japanese 450s is the fact that KTM have opted to stay with a carburettor for the 2010 450 SX-F. Fuel is provided through a Keihin FCR 41 carburettor, and the jetting and throttle response were super impressive.

Out on track I immediately noticed two things …. brakes and clutch!

The KTM uses a hydraulic clutch which offers such a light feel you barely notice it is there. This took a little bit of adapting to (in a good way) but once dialled in, I was super impressed with the feel that hydraulic clutches offer.

The KTM adopts the SXS Factory-style Brembo front caliper. WOW! What more can I say. This is the first 450 that I have climbed aboard and felt comfortable using my single finger technique. The feel and power that is offered is nothing short of sensational. This is something that I wish the Japanese manufacturers would pick up on. This is what brakes are supposed to feel like!

The power plant is good, offering a strong, smooth spread of power with good acceleration, and although the engine feels a little coarser than the Japanese 450s, it in no way detracts from its useable power.

Top-end horsepower is great and the benefits of still using a carby come in to their own higher up in the rev range.

The bike still felt a little harsh in the front suspension for my style of riding but with some adjustments to the compression and rebound we found a setting that handled the sharp edges a little better.

The bike turns well and feels stable in the middle of the corner, but I was having some difficulties getting traction over acceleration bumps. This could be solely down to the black round things, as they were not the right pattern or in good enough condition for the surface we were riding on.

In summing up, I was impressed with the 2010 KTM 450 SX-F overall. Brakes and clutch are fantastic and horsepower is not an issue. I can see now why there have been so many orange machines popping up at race tracks over the last 10 years.

To KTM’s credit they have taken on a Japanese dominated motocross scene and have managed to wrestle a fair chunk of the sales pie away in the motocross market. This is something that no other non Japanese manufacturer has been successfully able to do.

Since this test, there has been news of what is coming from KTM for next year in the form of a conventional linkage style suspension 350cc machine with fuel-injection to run against the 450s in the open class. It looks like KTM are going to be market leaders in the new smaller capacity open class machinery and I can’t wait to get a ride on one! 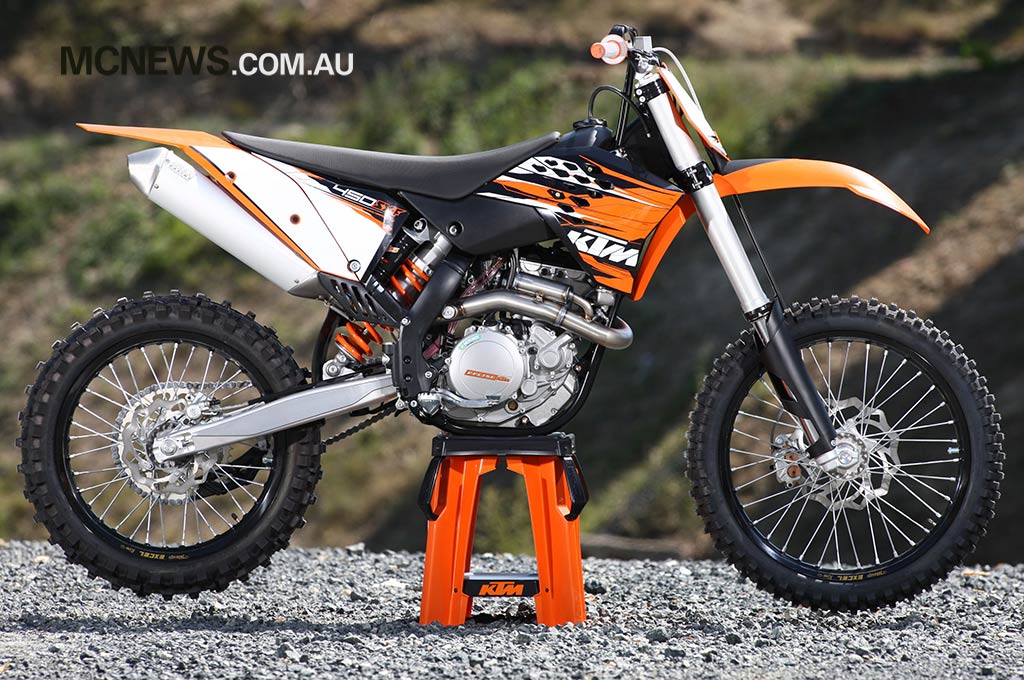