KTM chose its recent European Adventure Rally to allow their new 790 Adventure out in the wild among the public.

The Austrian manufacturer says that the all-new parallel-twin powered Adventure bike has been developed in tandem with KTM’s latest Dakar-winning weapon, the KTM 450 Rally.

From our experience at the KTM 790 Duke World Launch where we got to see first hand the tidy packaging and lightness of that 50kg engine/gearbox combination the 790 Adventure promises much.

It is that incredibly small packaging of the engine, whose dimensions are only fractionally larger than the current 390 Duke single, that will allow KTM to endow the 790 Adventure with lots of ground clearance while retaining a manageable seat height.

Radial mount four-piston front brakes and the full gamut of the latest generation of electronic aids will round out KTM’s ground breaking new machine.

“Obviously, what I rode is still a prototype, but it´s looking in terrific shape. Can’t wait to ride the final product!”

That final product will be revealed to the public at EICMA early in November. 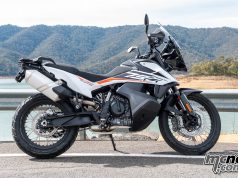 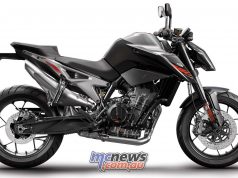 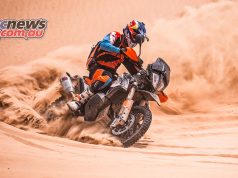