Michael Rutter took his first TT win since 2013, and his fifth in total, when he won Wednesday afternoon’s Bennetts Lightweight TT race at the 2017 Isle of Man TT Races, giving the Italian Paton manufacturer their first ever win around the Mountain Course. He set a new lap record of 118.645mph (1:16.19.324), beating Ivan Lintin’s time for the four lap race from last year.

Rutter took the lead from the beginning of the race and was never headed, eventually beating Martin Jessopp (Riders Motorcycles Kawasaki) by 8.8s with Peter Hickman taking yet another TT podium this week in third, this time on the KMR/IEG Kawasaki.

Rutter led through Glen Helen on the opening lap from his Paton team-mate Stefano Bonetti, the gap just one second with Jessopp only fourth tenths of a second further back in third. 2015 and 2016 race winner Ivan Lintin slotted into third ahead of Daniel Cooper and Hickman.

Passing through Ramsey first time around, Rutter had increased his lead slightly to 3.4s with Bonetti still holding onto second some 2.1s clear of Jessopp. Lintin was a further 2.9s back in fourth as Hickman moved up to fifth ahead of Cooper.

An opening lap of 118.955mph gave Rutter a 4.4s lead over Bonetti but Jessopp was now only one second behind as he looked to better this third place from last year’s race. Lintin was still in fourth but now 4.6s behind Jessopp as Hickman and Cooper maintained fifth and sixth.

Rutter added a further half second to his lead on the run to Glen Helen but it was Jessopp who was now up to second as Bonetti battled on track with Hickman and James Cowton. There was also a change in sixth as Michael Dunlop moved ahead of Cooper.

Coming into the pits for the fuel stop, a superb second lap of 120.362mph enabled Rutter to pull further clear, his lead now 10.5s from Jessopp as Bonetti’s good run ended with retirement at the Creg ny Baa. Lintin had a small advantage over Hickman and Cooper who was now up to fifth as Dunlop dropped back to seventh.

However, a helmet change by Lintin lost him valuable time whilst Rutter also lost time at the pits and, sure enough, through Glen Helen on lap three his lead over Jessopp was down to 2.8s. Hickman moved up to third at Lintin’s expense with Cooper in fifth and Cowton up to sixth.

Rutter immediately responded and almost doubled his lead on the high speed run to Ballaugh, his advantage going back up to 5.4s. Meanwhile, Hickman was now looking secure in third with a gap of over 21 seconds to Lintin but Gary Johnson was out of luck with his second retirement of the day.

At the head of the field, Rutter was pressing on ahead and going into the fourth and final lap, he’d increased his lead to 7.9s and was only a few machines length behind Jessopp on the road. Hickman was over 25 seconds behind in third with similar gaps between Lintin, Cooper and Dunlop but newcomer Adam McLean was forced to retire from an excellent ninth at Ballaugh.

Rutter had no such problems and, circulating with Jessopp on the road, he took the win by 8.8s with the latter securing his second TT podium and best ever result.

“It’s brilliant to win another TT race, especially as I’m getting on a bit now! I hadn’t shown my hand too much in practice but felt confident that the Paton could give me a good shot at the podium and although the Lightweight bikes aren’t the fastest out there, you have to ride them so hard round the corners. I got my head down on the first lap but lost a bit of time at the pit stops so I had to dig deep to pull Martin back and once I’d caught him, we had a lot of fun. You start hearing things and worrying the bike might not last when you get towards the end but it was faultless – I might not understand a word of Italian but the team did a great job.”

“We changed the bike completely before the race – different engine, different forks, different gearing, everything – but it ran perfectly so full credit to KMR Kawasaki for doing a great job. I was a bit steady on the first lap and when Stefano Bonetti came by me, it affected my rhythm a bit as his bike was faster in a straight line but I was quicker through the corners. I got by him again and got my head down so to finish third and take my fourth podium of the week is brilliant. A big thanks to Ryan and the team for all their hard work and also to Alan and Rebecca Smith for letting me ride the bike.”

Lintin was unable to make it three in a row and had to settle for fourth as Cooper got his best TT result in fifth with Brookes doing the same in sixth.

“I didn’t want to be leading on the road in the Lightweight race but by default it happened so I just had to set my own pace and see what happened. Practice hadn’t been ideal and I was a bit surprised it took as long as it did for Martin Jessopp to catch me but when he did, I thought I’d sit behind and hopefully get towed along. Unfortunately, the clip on the visor broke at the pit stop so I lost a lot of time changing helmets and my podium position disappeared. After that, I could see I was in a safe fourth so settled for the position and although it’s a shame I couldn’t make it three wins in a row, I was pleased with fourth. It made up for the Superstock race which I found really tough due to the windy conditions. I had a couple of scares so just rode a steady race. It was an up and down day and it obviously ended in the worst possible way with the loss of Alan and my thoughts are with his family and friends.”

“I knew the Lightweight race would give me my best result and although I really wanted to finish on the podium, I’m happy enough with fifth and my best ever TT finish. I’m not sure if we chose the wrong tyre or if the shock lost pressure but it wasn’t quite handling right and I was a bit frustrated with how the race went. However, I lapped quicker than I’ve gone before on the bike and fifth place in a TT race is a result to be proud of.”

Riding the second KMR/IEG Kawasaki, Brookes had relegated Michael Dunlop to seventh on the final lap, which was a ripping 119mph scorcher for the 34-year-old.

“It’s taken me a while to get dialled back into the Mountain Course and the lack of track time in practice hit me harder than most so it wasn’t until the final session that I got out on the KMR Kawasaki. The Lightweight bike requires a different technique to the bikes I’m used to riding and with it being a last minute deal riding for Ryan, I didn’t get much time on the bike but we moved forward all the time. I’ve really enjoyed working with Ryan and he gave me a great bike so it’s really good to pay him back with a good result.”

“It was obviously a great shame to have Lee and Danny ruled out after injuries sustained during practice week but I’m absolutely over the moon with the results today. Peter jumped on the bike and after not much practice, we made a lot of changes prior to the race which paid off and a podium is brilliant. Josh didn’t have much time either so to lap at 119mph and finish sixth is superb so a big thanks to both riders, I can’t praise them enough. After a great North West 200, it’s brilliant to have such great results here at the TT so a massive thank you to all the team for all their hard work and also to my loyal sponsors for their continued support.” 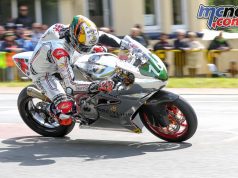