Exciting stunt entertainer Luke Follachio, AKA Lukey Luke, is all pumped up for the coming stunt season after performing his season-opening show at the StKilda Festival in Melbourne last weekend.

“The St Kilda Festival is always so much fun for me,” said Lukey Luke. “I live just around the corner and spend so much time here in local restaurants, businesses and training along the beach daily.  The crowds are fantastic. It’s such a great vibe and gets me super motivated and pumped for my year ahead!”

One of the premier motorcycle stunt acts in Australia, the KTM/LL Stunt Show packs a small arsenal of KTM models including Duke and Super Duke models, and is equally adept at both confined arena and racetrack performing.

Over the course of this year Lukey Luke will perform in such environments on approximately 30 occasions, thrilling fans with his combination of big smoking drifts, acrobatic stunts, or both.

“I had a fantastic break over Christmas and the New Year,” said the 30-year-old, “but I’m fully on the gas now and back in the swing of it all!”

Next stop for the KTM/LL stunt show will be Victoria’s Phillip Island circuit, for this weekend’s World Superbike championship opener – the seventh consecutive World Superbike appearance for Lukey Luke.

“You can see me set up in the WSBK paddock over the weekend with the KTM/LLSTUNT Promotional Hub,” says Lukey Luke. “I’ll have my KTM 990, 690 and 250 there on display and will be riding both the 990 drift bike and the 690 stuntbike.

“The World Superbikes are always fun, performing on a world stage like that is super exciting! And having the opportunity to Drift my 990 Superduke R on one of the greatest racetracks in the world is an awesome sensation!

“Last year we set up my KTM 990 Superduke R with an 8-inch extended swingarm, and this makes it marginally more forgiving for drifting, without compromising its manoeuvrability, nimble nature and quick steering. With all that smooth and responsive power delivery, drifting that bike is something I really look forward to! 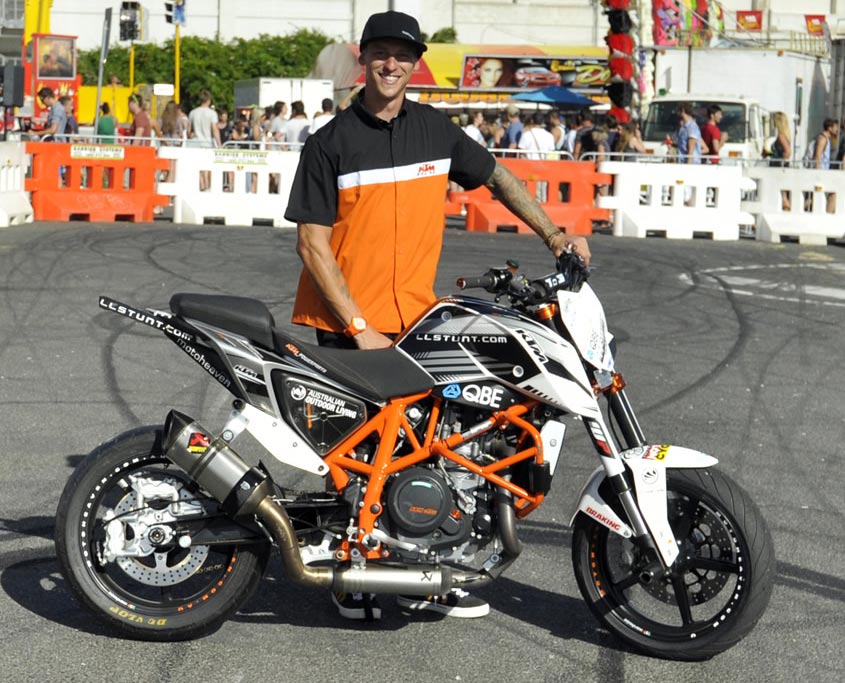