Wayne Maxwell was quick out of the blocks this morning at Hidden Valley as the fourth round of the 2022 mi-bike Motorcycle Insurance Australian Superbike Championship got underway around 0900 this morning in Darwin.

Despite the early hour, the mercury was already nudging 25-degrees ambient and the track temperature of 31.5 will likely be the lowest competitors experience all weekend.

Maxwell was the first in the low 66s but Bryan Staring was first in the 65s, a 65.772 to the DesmoSport Ducati man on his seventh lap of the 25-minute FP1 session.

Maxwell then also dipped into the 65s, not once, but twice. His best of 65.867 coming on his 11th lap of the session. Both riders then entered the pits before going out and cranking out some more 65s…

Staring backing up his early 65.772 with a 65.804 and then went quicker again in the opening two sectors of the next lap before abandoning that attempt.

Then in the final minute of the session it was game on!  Both Staring and Maxwell under at the first split, while Staring’s lap went away though Maxwell’s kept going, and the result was a 65.716 morning benchmark to complete the session.

There is nothing between Maxwell and Staring, 65.716 plays 65.772, but being on top is a good way to start the weekend. Maxwell put in three 65s during the session however Staring reeled off five of them… 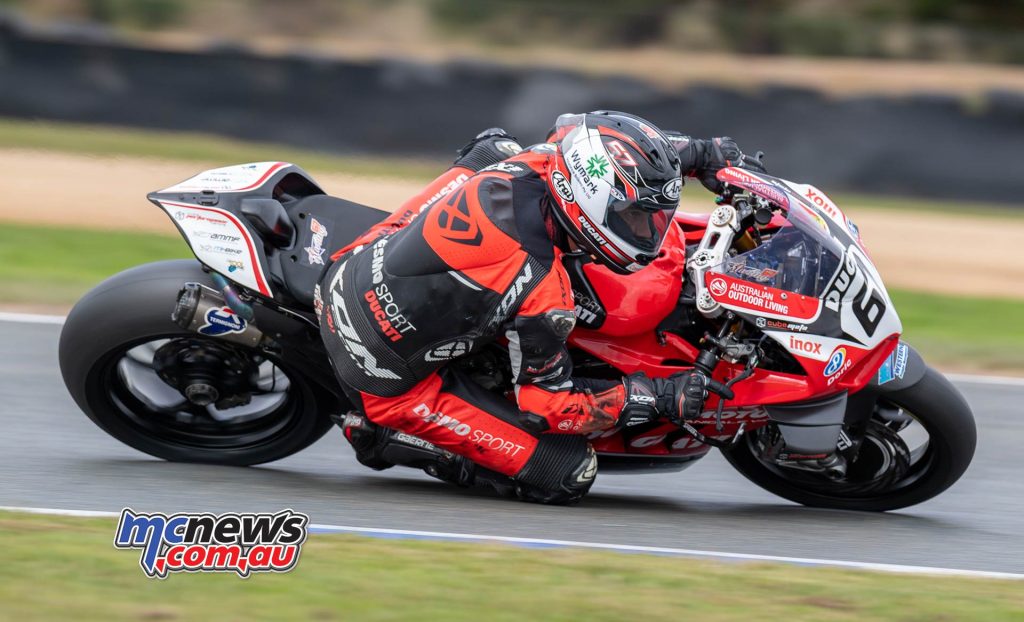 Behind the Ducati duo was the YRT pairing of Mike Jones and Cru Halliday with South Australian privateer Arthur Sissis making for a Yamaha 3-4-5 on the FP1 time-sheets.  Jones sneaked into the 65s on his final lap of the session, a 65.988 on his 21st lap of the session. Incidentally that was the most laps by any rider in FP1.

Troy Herfoss ranked sixth this morning on the back of a 66.325 while Glenn Allerton headed a BMW triumvirate followed by team-mate Josh Waters and Lachlan Epis.

Daniel Falzon rounded out the top ten ahead of Mark Chiodo and Anthony West while multiple Western Australian Superbike Champion Ben Stronach was 13th ahead of young Max Stauffer.

The front runners are already in their groove and well on the pace, the second half of the field however have lots of work to do. Maxwell was faster on his very first lap of the circuit this morning than everyone from Stronach back.

There is also no doubt more to come from the front group, as they are yet to eclipse the 65.445 race lap record set here by Oli Bayliss last year. If Staring had put all his best sector times from this morning together in one lap though he would have gone close with an ‘ideal’ of 65.465 from FP1.

As well as the always epic racing, this special edition will feature exclusive behind the scenes action, colour stories and all the thrills and spills from one of the great rounds of any season; Hidden Valley, NT.