The Michelin Australian Motorcycle Grand Prix will see the first time that the tyre specialist has been the named sponsor of a race and Phillip Island is certainly a circuit that will put the rubber through the ultimate demands required from a MotoGP tyre. The challenging and fast 4,448m layout and the requirements for the tyres at this unique circuit is well known, so Michelin has created a new compound especially suited to the configuration and the asphalt. With the information gathered at the positive test earlier in the year, Michelin will take a range of three slick front tyres and two rears.

The front Michelin Power Slicks will be soft (white band), medium (no band) and hard (yellow band). With a compound designed for the rigours of the circuit the soft and hard versions of the tyres with also have an asymmetric construction with a harder left-hand-side to cope with the long, fast corners that the track is famous for. To match the front slicks, two totally new rear tyres will be introduced in Australia, available in a medium (no band) and hard (yellow band) compound, both tyres will also feature an asymmetric pattern with the harder left shoulder.

The Phillip Island race is often referred to as giving the opportunity of four seasons in one day, with inclement and very changeable weather playing an important part in the weekend’s events, and the chance of the conditions changing from warm sunshine to freezing rain in a short time a real possibility. To cover this Michelin has a range of three wet front tyres and two rear. The front Michelin Power Rain tyres will come in extra soft (light blue band), soft (blue band) and medium (no band) whilst the rears will feature soft (blue band) and medium (no band) compounds. With the changeable conditions likely to play a part, the Michelin Power Inter (silver band) could also be necessary to give the riders optimum performance on a drying track.

Michelin and the whole of the MotoGP field will take to track for the first free practices on Friday 21st October, with the qualifying taking place the following day to decide the grid positions for the 27-lap race. Sunday’s main event will get underway at 1600 local time.

“Phillip Island is a really special place, there is no other track like it on the calendar and this week’s event will have an even greater significance because it is the first time Michelin has sponsored a MotoGP race. Michelin has taken this decision because the Asia Pacific market is very important to the company and one of the main objectives of what we do within Michelin Motorsport is to support business growth. This makes the sponsoring of this event  very important for the marketing of a growing region and also gives us a chance to showcase our involvement in the biggest motorcycle championship in the world. 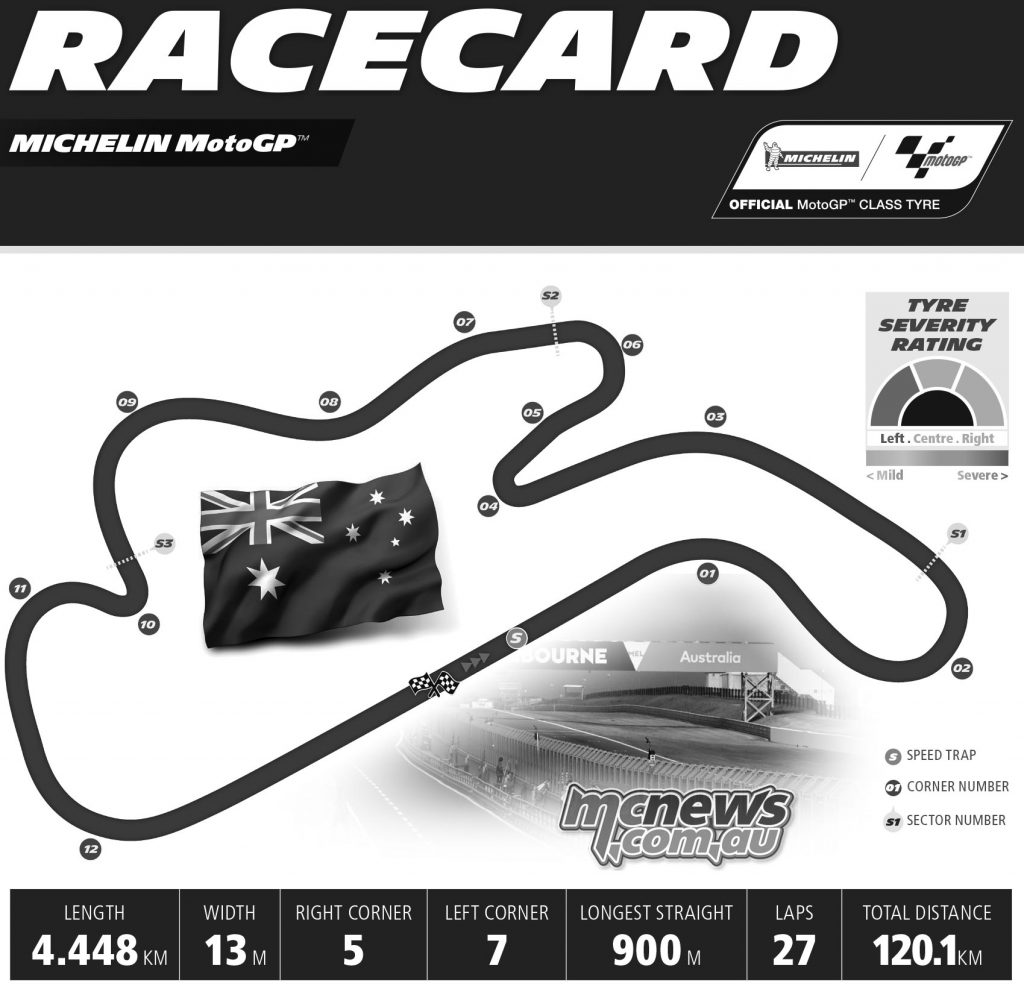 “With the race being sponsored by Michelin will mean that we will really be under the spotlight and we are under no illusions about the task that we will have at Phillip Island. It is one of the most demanding tracks we visit and is very hard on tyres, so with this in mind we have developed a tyre especially for the track. With no racing information from the last seven years, we had very little relevant data, but the test there at the start of the year was very positive – despite the rain – and we collected a lot of data from all the riders and teams. We have produced a tyre that we believe will work well. It is a completely new compound, you could say it’s the ‘Phillip Island Tyre’ really, as we won’t use it anywhere else. The track is very abrasive so we have taken that into consideration and created a tyre that will cope with that, as well as the fast corners, so we have also produced an asymmetric front to give the riders the grip they will need to perform around this special track.”