Misano MotoGP with Michelin and Brembo

Misano MotoGP with Michelin and Brembo

MotoGP heads to the Adriatic Coast in Italy for round 13 of the MotoGP World Championship as it travels to Misano for the Gran Premio TIM di San Marino e della Riviera di Rimini.

The Misano World Circuit Marco Simoncelli is a technical and demanding track with a medium severity layout that features high-speed corners, a fast long sweeping curve and a number of slower turns which make overtaking very difficult.

The 4,226m track is not one where ultimate top-speed is a big requirement, but a smooth and consistent riding style and a good bike set-up will be important.

With all these variables Michelin has a range of tyres designed to cover all aspects and give the riders the best option for Sunday’s race. A new version of the front Michelin Power Slick will be used at Misano, it is a small evolution of the current tyre and has been developed from the tests previously held at the Italian circuit, it features a new casing designed to give the riders more stability under braking and when cornering.

This new design will be available in soft (white band) and medium (no band) compounds, along with a hard (yellow band) which will feature the same casing as has been used previously this season. The rear selection for Misano will be a medium compound (no band) and a hard version (yellow band), both with an asymmetric design featuring a harder right-hand shoulder to cope with the track’s 10 right turns, whilst the left side will be of a softer compound to heat-up quickly through the six left-handers.

Located near Rimini on the Adriatic Riviera, the Misano World Circuit Marco Simoncelli is close to beautiful coastline and the weather is usually very favourable there at this time of year, but it has also been known to rain in this part of the country in early September, so Michelin will have a full range of Michelin Power Rain and Power Inters to cope with any changing conditions. For use in wet conditions the Power Rain tyres will be available in soft (blue band) and medium (no band) for both the front and rear, with the Power Inters (silver band), also for the front and rear, being offered for use in damp, but drying conditions. 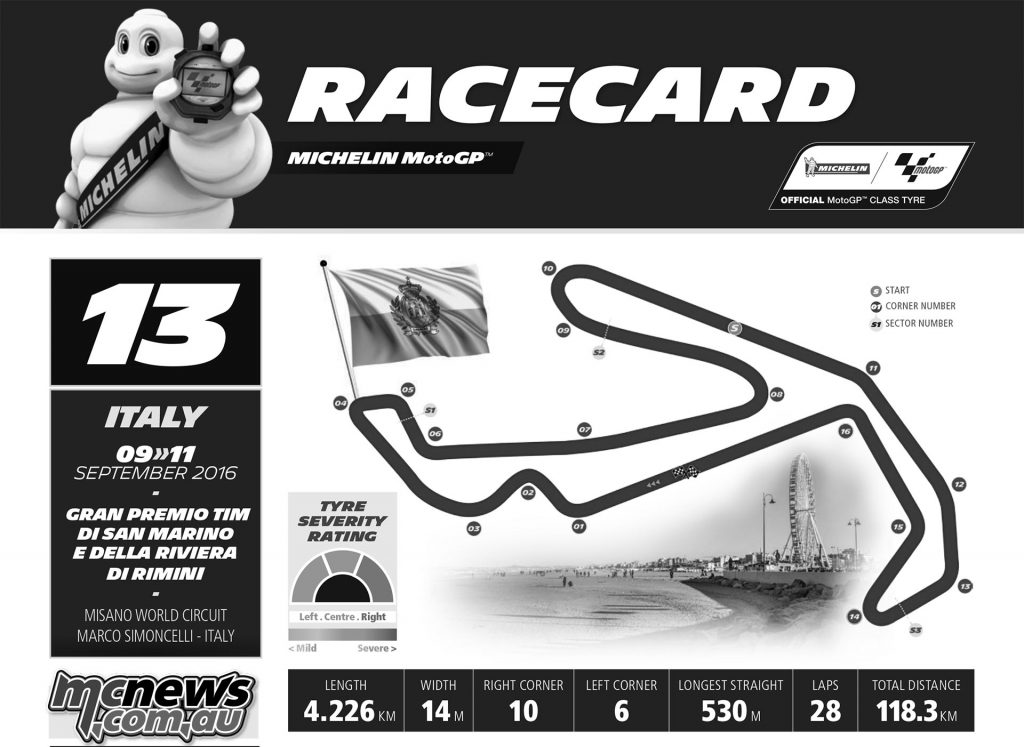 “Misano is a fairly technical circuit and has a combination of fast sections, slow corners and chicanes, so we will need to have tyres that work well over the entire layout. We have recently had some riders test there, so we have some up-to-date information that we were able to use as we prepared the tyres for the weekend. We will have a new solution with the front casing, it has been developed from this test at Misano and will be used alongside the standard casing we have been using. With the majority of corners right-handers it is important to have the asymmetric rears as there are two very quick right turns, as well Curvone which is a long sweeping curve taken at high-speeds. Some of the lefts are very slow corners so we have a softer left side to the tyre to make sure it will get heat into it quickly. Misano is a great place for spectators as it’s right on the Adriatic Coast, with its lovely beaches, great scenery and superb restaurants, plus the local fans always make it an event to remember, so we’ll be making sure we do everything we can to give them something special.”

The San Marino and Rimini Coast MotoGP according to Brembo

The 4.2 km-long track is run clockwise and is packed with 16 curves: 10 to the right and 6 to the left. Braking ranks medium on the difficulty scale for brakes and deceleration ranges between -0.8 and -1.4 g.

This mid-level difficulty is due to both the intensity of the cut outs and temperature control.

According to Brembo technicians, who work with all of the MotoGP riders (Brembo is supplier to 100% of the premium class riders), the Misano World Circuit Marco Simoncelli falls into the category of tracks that present mid-level difficulty on the brakes. On a scale of 1 to 5, it earned a 3 on the difficulty index, the same score given to the Silverstone Circuit and 7 other tracks. 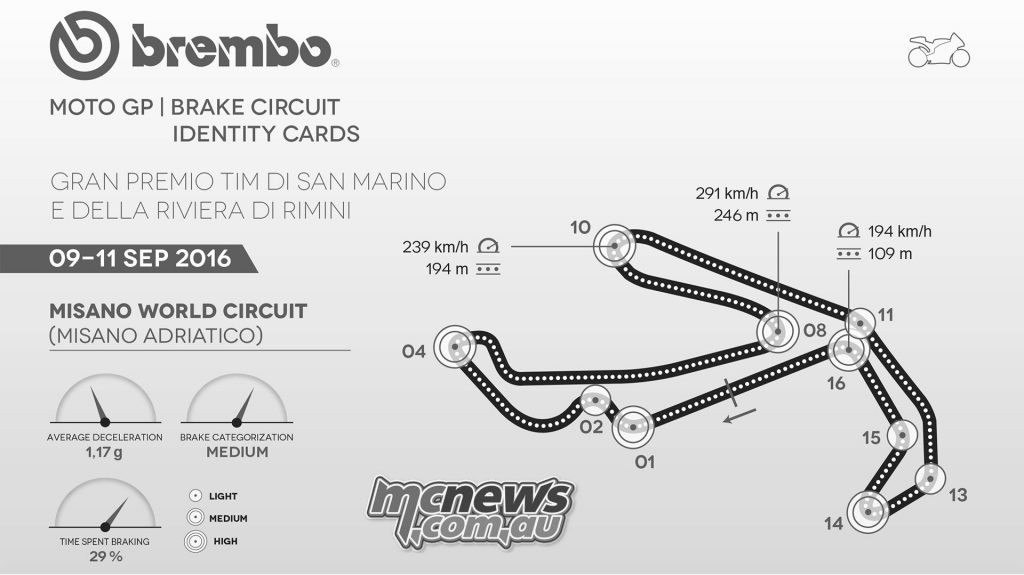 Brake Use During the GP

Ten of the 16 curves on the track require deceleration, which means that throughout the course of the race, the braking system is used for an average of 12 minutes. Since the bikes never go over 300 km/h, unlike at Mugello – the other Italian World Championship circuit – the average deceleration remains at just 1.17 g. Totalling all of the force applied on the brake lever by one rider from the starting line to the chequered flag, the sum is more than 1.35 tonnes, which is equivalent to 7 thousand salami sandwiches.

The Most Challenging Stops

Of the 10 stops on the Misano World Circuit Marco Simoncelli, none are considered very challenging for the brakes, but 6 present mid-level difficulty and 4 are light.

The Quercia Curve (number 8) dips slightly downhill and is the stage for the longest and most difficult braking: 246 metres, the same length as more than 123 go-karts lined up in a row. In just 5 seconds with a load of 6.9 kg on the lever, the bikes go from 291 to 75 km/h.

Immediately after this is the Tramonto Curve (number 10), a turn that is tough on the riders and the brakes because of its design and slope: the bikes drop from 239 to 75 km/h in 4.6 seconds in a space measuring 194 metres.

Not to be underrated is the Misano Curve (number 16) just before the arrival, because the asphalt is rough and it slopes downhill. The best riders manage to limit braking here to only 109 metres, applying a load of 6.4 kg on the lever.

In terms of required space, the longest braking section is at Curve 13 where the riders brake for up to 300 metres in order to stay on the track, applying a load of 3.8 kg on the lever. 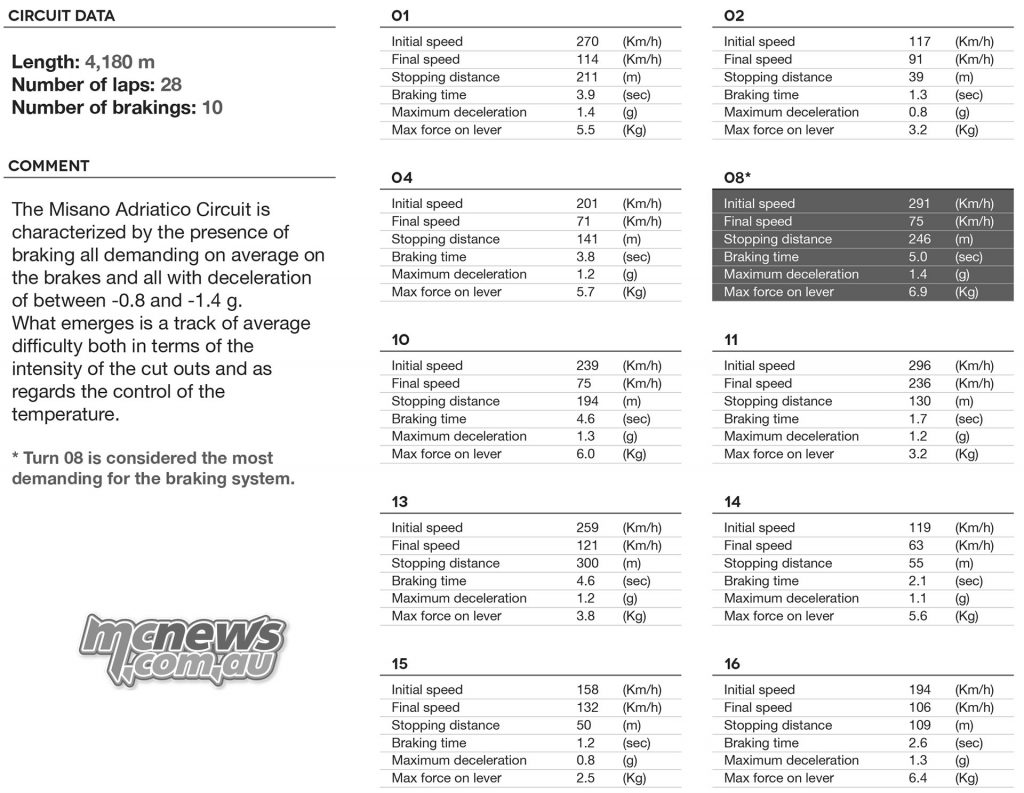 As of 2007, the year that the Misano Adriatico Circuit returned permanently to the World Championship, bikes with Brembo brakes have always triumphed in MotoGP on this track.

Valentino Rossi and Jorge Lorenzo have each won three times, while Marc Marquez, Dani Pedrosa and Casey Stoner have one victory each. Ducati has not won on this track since 2007.