Familiar Kawasaki 1-2 as practice gets underway at Misano

The first day’s action at the Pirelli Riviera Di Rimini Round concluded with the World Champion Jonathan Rea (Kawasaki Racing Team) in familiar territory at the top of the combined practice timesheets. The Northern Irishman set down a 1’34.901 marker in the afternoon FP2 session, putting him just 0.03s ahead of the day’s second fastest rider Tom Sykes (Kawasaki Racing Team), with Marco Melandri (Aruba.it Racing – Ducati) third best.

Rea recovered from some technical problems earlier in the day to lap faster than his rivals and put himself in a good position at the seventh round of the 2017 MOTUL FIM Superbike World Championship.

“The track feels a little bit more greasy than it did at the tests, not a huge amount, but in the tests I could ride in the 1’34s with ease, and I did so many, but now it is a little bit harder. Our bike works even with less grip on the track, which is important. This morning we confirmed a few items after our test here and in the afternoon we changed the position of the front of the bike a little bit, to try to give me more confidence on the brakes. We have our race tyre package defined already, and the way the bike is set-up, so tomorrow morning we can work on a long run in FP3 before Superpole starts.” 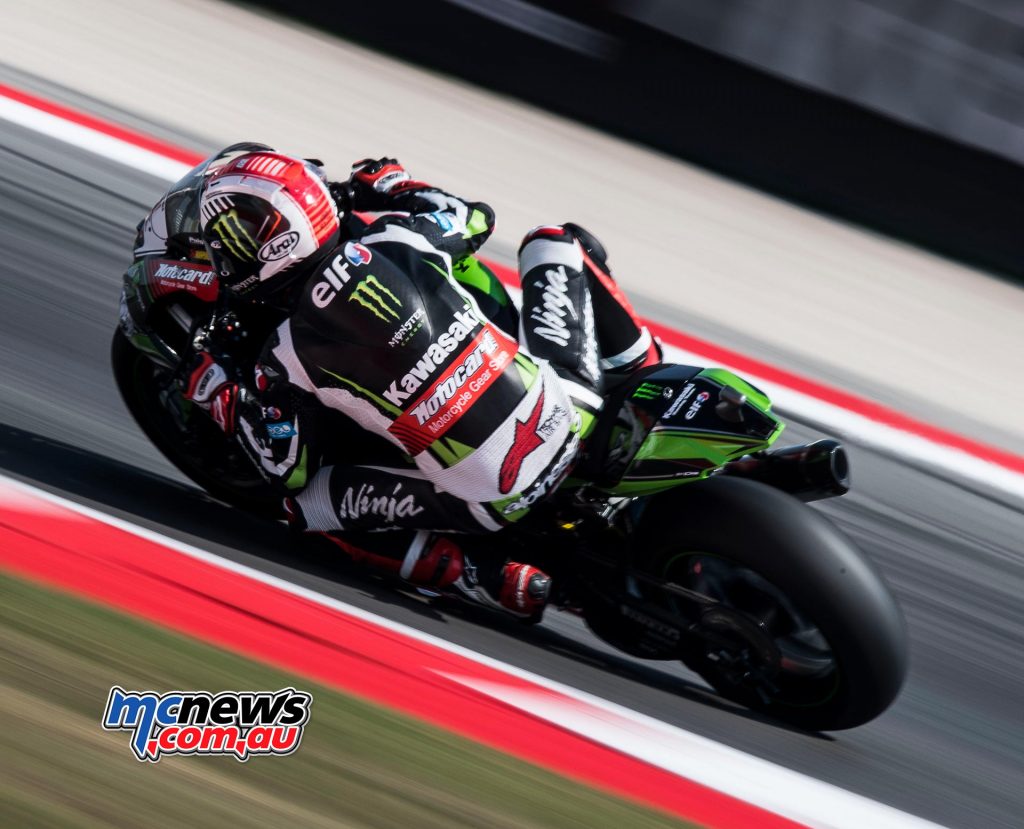 Sykes had been the quickest rider in FP1, followed by Rea and Melandri in the morning top three, but the Yorkshireman ended day with an uncharacteristic crash at the end of FP2.

“The track conditions were stable this afternoon even in the hot conditions, which gave a similar kind of pace compared to this morning. In FP1 I felt the track had less performance than we had in the tests, so we just missed some of that, that’s all. Because we were so good and consistent in the recent Misano test we wanted to explore a few little questions that we had, so at the end of FP2 we did not have our ideal set-up in. I tried to do what I normally do in a perfect scenario and just got caught out and lost the front. It was such a small crash and I am fit and ready to go. We learned a few things today so we will put those things in with our best set-up from testing and go racing.” 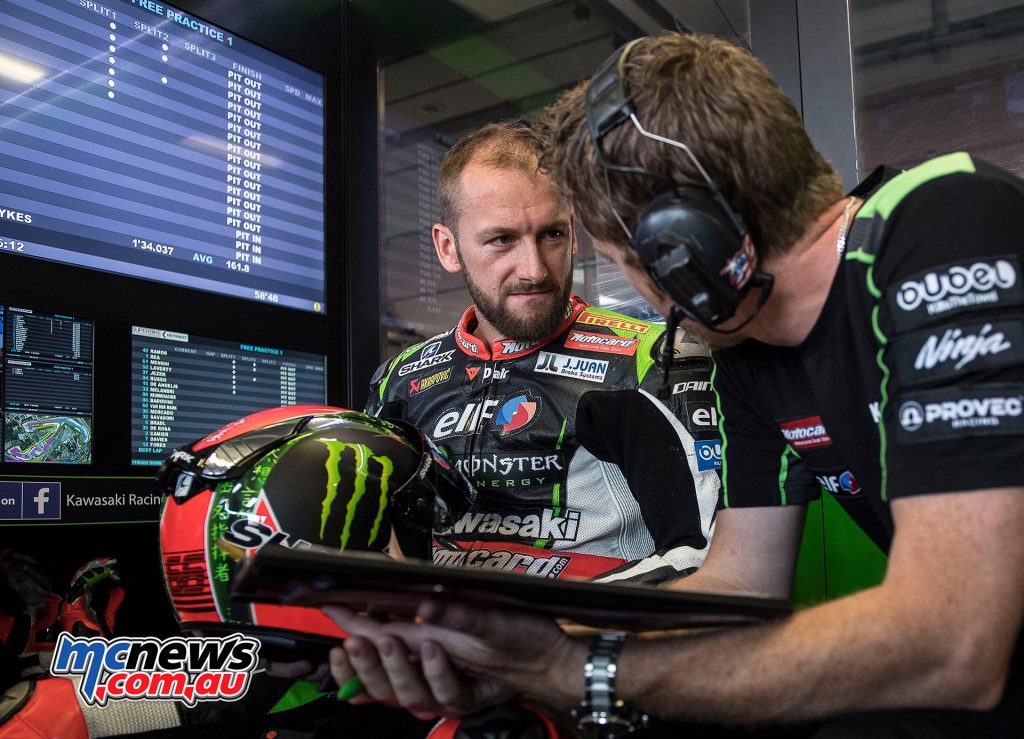 Melandri finished his day a quarter of a second behind pace setter Rea and just under a tenth of a second ahead of Friday’s fourth best rider – his teammate Chaz Davies.

“I feel confident. It’s always a plus to finish day 1 within the top three, especially when it’s your home race. The team did a really great job after our last test here, analyzing the data and coming up with a setup that turned out to work quite well. After two difficult rounds, it seems we finally managed to put some issues behind. Now we’ll try to make further improvements, particularly in the first sector of the track, but I want to focus first and foremost on our race pace because, in these conditions, consistency will be crucial. I believe that, if we manage to exploit our potential, we can ride a solid race from start to finish.” 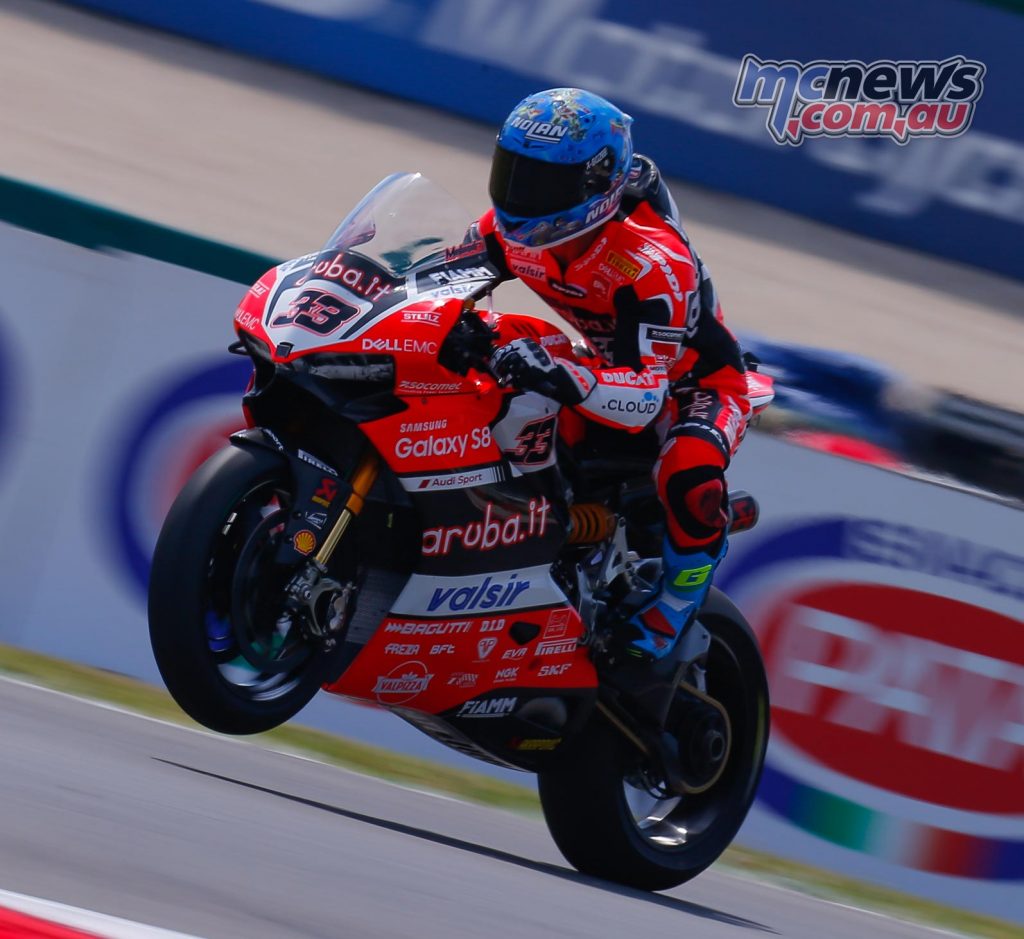 “Today has been a bit more difficult than what we expected. I still don’t feel totally at ease on the bike, we need to work on the setup. In the test done here a couple of weeks ago we were a bit more competitive, but weather conditions were different today, hotter and more humid, and we struggled a bit more to make good lap times. In particular, I don’t have enough confidence with the front, and we’re on the limit with grip. We also need to tweak a few things with the electronics. We analysed the data in depth, we’re working to improve and I’m confident we’ll be able to better express our potential tomorrow.” 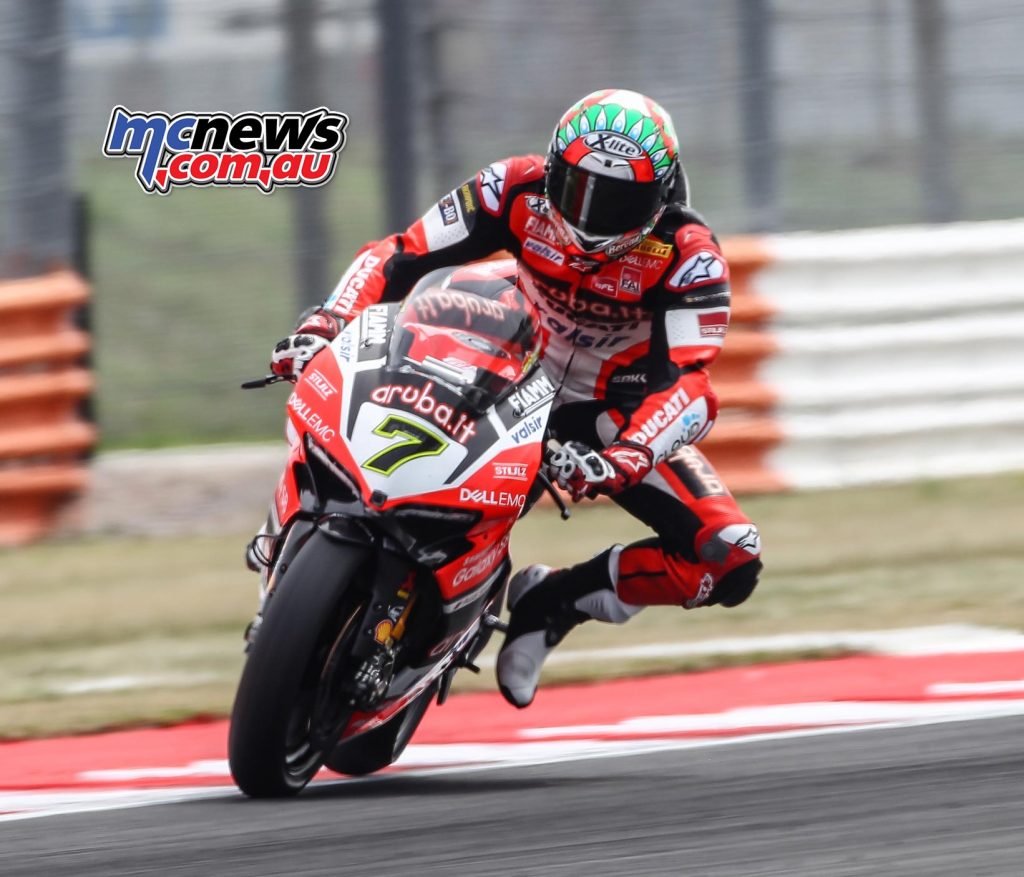 Lorenzo Savadori (Milwaukee Aprilia) in 11th and Randy Krummenacher (Kawasaki Puccetti Racing) in 12th were two of the riders to miss out on automatic Tissot Superpole 2 classification so they will participate in SP1 on Saturday.

Likewise Stefan Bradl experienced some electronics issues which cost the German valuable track time. Bradl was near the top-10 in the early stages of the morning’s session, In the afternoon, however, with increased temperatures and technical issues, Stefan was unable to make a further step forwards in terms of speed over a single lap.

“It was quite a busy day. This morning the feeling with the bike was not too bad; I feel that the test we did two weeks ago was very helpful, because we did make a step forwards with the electronics in terms of rideability and throttle connection with the rear wheel. In the afternoon, however, we started with used tyres and the lack of grip turned out to be a problem for everyone. Then we had a problem with the electronics which forced me into the pits for a long period, so I could not complete many laps. We lost a lot of time and that is the reason why we could not improve on our FP1 time. Our potential, though, is much higher, because my feeling with the bike this morning was very positive. Hopefully we’ll be able to turn it into a better performance tomorrow!” 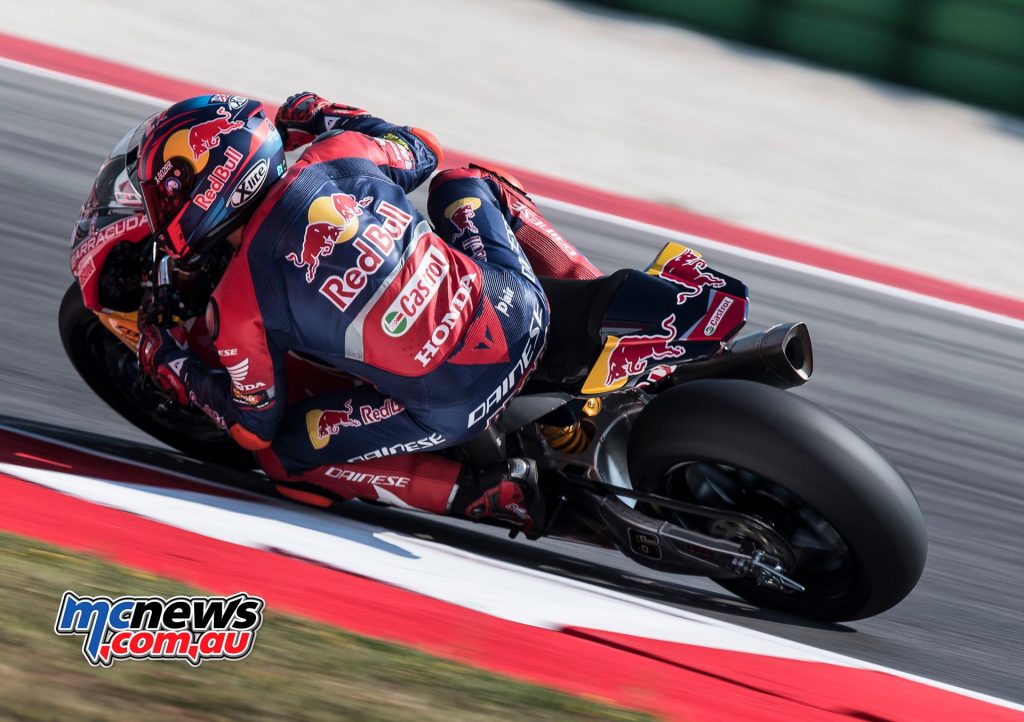 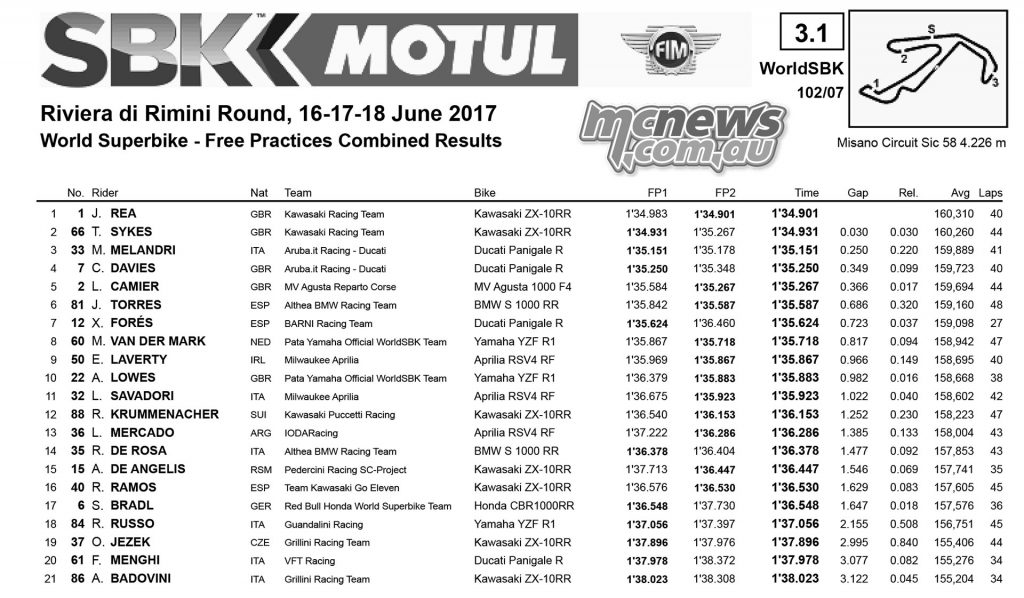 Sofuoglu’s best time put him +0.156s ahead of Briton Rea and +0.205s in front of third placed American Jacobsen. But it was not all plain sailing for Turkish rider Sofuoglu who lost some time in the morning session due to an engine problem and then crashed at Turn 8 in the final ten minutes of the FP2 session.

A fraction adrift of Caricasulo, meanwhile, was his compatriot Christian Gamarino (BARDAHL EVAN BROS. Honda Racing) in sixth. Then in seventh place on the Triumph was Profile Racing rider Luke Stapleford.

Lachlan Epis was 29th quickest on the opening day of practice while countryman Giuseppe Scarcella rounded out the field in 35th. 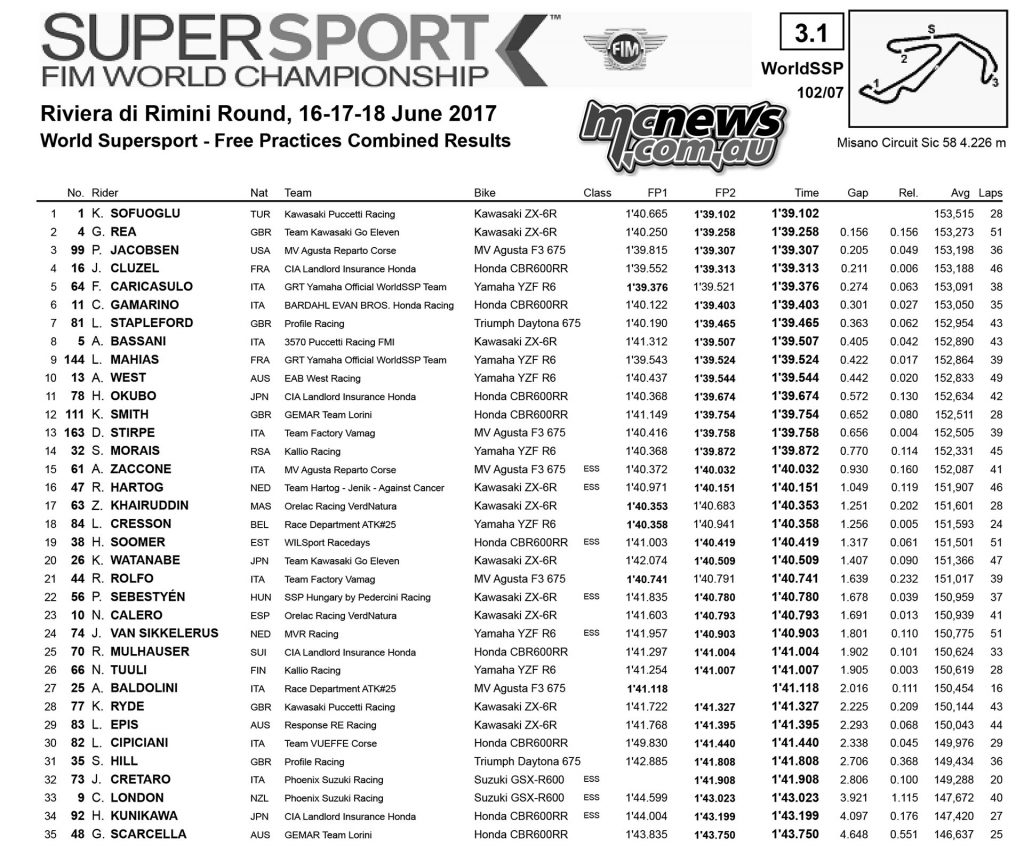 Mike Jones was 11th quickest on the opening day of Superstock 1000 practice at Misano while his Aruba Ducati teammate Michael Rinaldi topped proceedings. 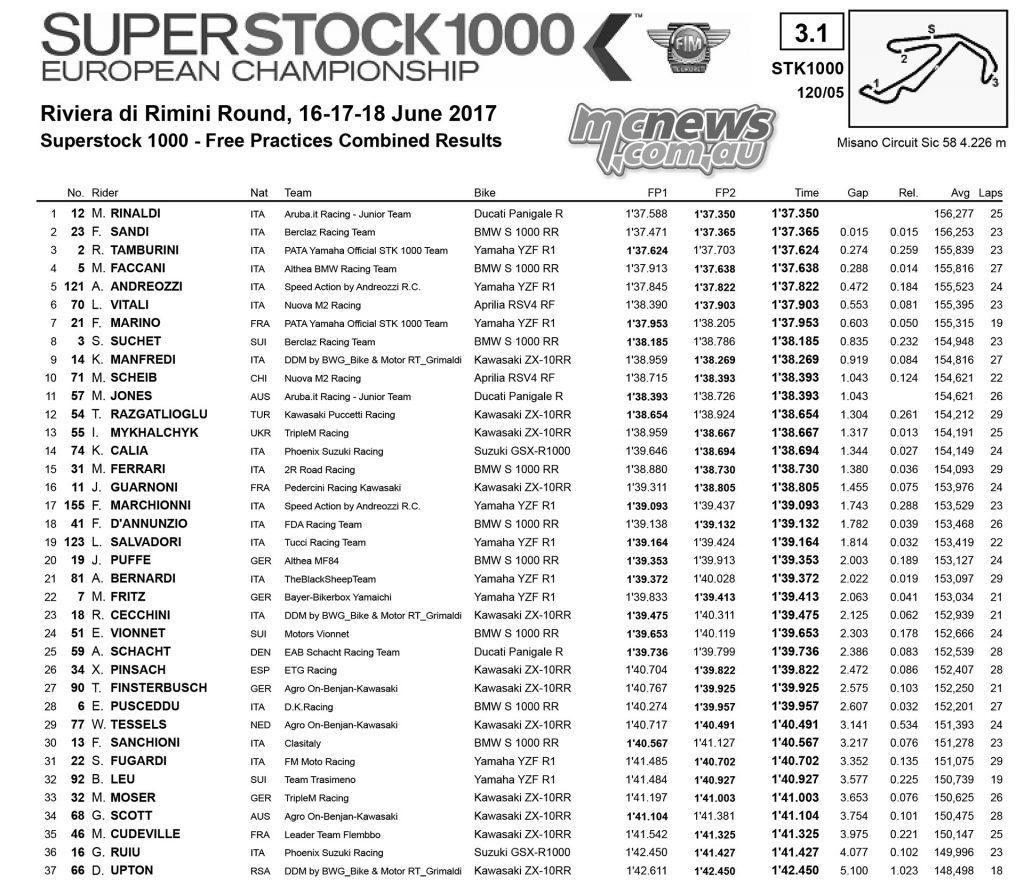 Rea survives Magny-Cours melee to put one hand on trophy