Marc Marquez (Repsol Honda Team) has taken a stunning win at MotorLand Aragon to extend his championship lead ahead of the flyways, with Movistar Yamaha MotoGP duo Jorge Lorenzo and Valentino Rossi dueling it out to complete the podium. After re-taking his teammate and defending P2, the Mallorcan held off Rossi before the Italian ran wide, forced to settle for P3 in an expensive day in the title fight.

After a scuffle off the line through Turns 1 and 2 at a dry but cool MotorLand Aragon, it was Team Suzuki Ecstar rider Maverick Viñales who emerged from the melee to turn his front row start into the early lead in the race. With the front group close all the way down through the top ten, Marquez soon struck to take the lead before a wobble through Turn 7 saw the championship leader drop back into the group slightly, down to P5. Lorenzo was the man on the chase behind new leader Viñales, with the number 99’s teammate Valentino Rossi in very close company.

The lead began to stretch for Silverstone winner Viñales, before it was Rossi tagged onto the back of the Suzuki rider and looking for a way past, finally making a clever but aggressive move to take the lead with 15 to go and sit the younger Spaniard up. Viñales, pushing to find a way back through, then ran wide and let Marquez through to hunt down his championship rival. With Lorenzo then on the scene, the front group divided into two duels.

Once with rider from Tavullia, former apprentice Marquez moved quickly to overtake the master, through on the inside on the ‘Aragon Corkscrew’ and making it stick. The championship leader then had the pressure of 9 world titles close behind and trying to hang on, but Marquez kept his head down and the pace up to begin to get the better of the Italian and create a gap. The pace shown by the 2013 and 2014 MotoGP World Champion throughout the weekend on home turf proved to have survived the trip to Sunday, as the number 93 bike started to get smaller and smaller in front of the 46 plated Yamaha – with Rossi then forced to start looking over his shoulder instead as Lorenzo and Viñales threatened.

As the laps ticked on, Lorenzo left Viñales and caught Rossi, with the Movistar Yamahas then locked together in a fight for P2 and the ‘Spartan’ holding off the ‘Doctor’ – until the Italian ran wide in the final laps. For Rossi, the missed opportunity is a big one as he fights to close on title leader Marquez – dropping 9 points with the championship leader taking the win. Lorenzo, after a difficult weekend until a last minute front row, recovered well from a crash in morning Warm Up to cross the line in an impressive P2.

Viñales kept his Suzuki in fourth after dropping back in the latter stages of the race, earning another top five for the impressive Spaniard in only his second season. Cal Crutchlow (LCR Honda) had a solid ride to prove top Independent Team rider in fifth, just ahead of Misano winner Dani Pedrosa (Repsol Honda Team) – who had a more difficult race at MotorLand but crossed the line in sixth to beat Aleix Espargaro (Team Suzuki Ecstar) in the final stages, with brother Pol Espargaro (Monster Yamaha Tech 3) behind the Suzuki in P8. 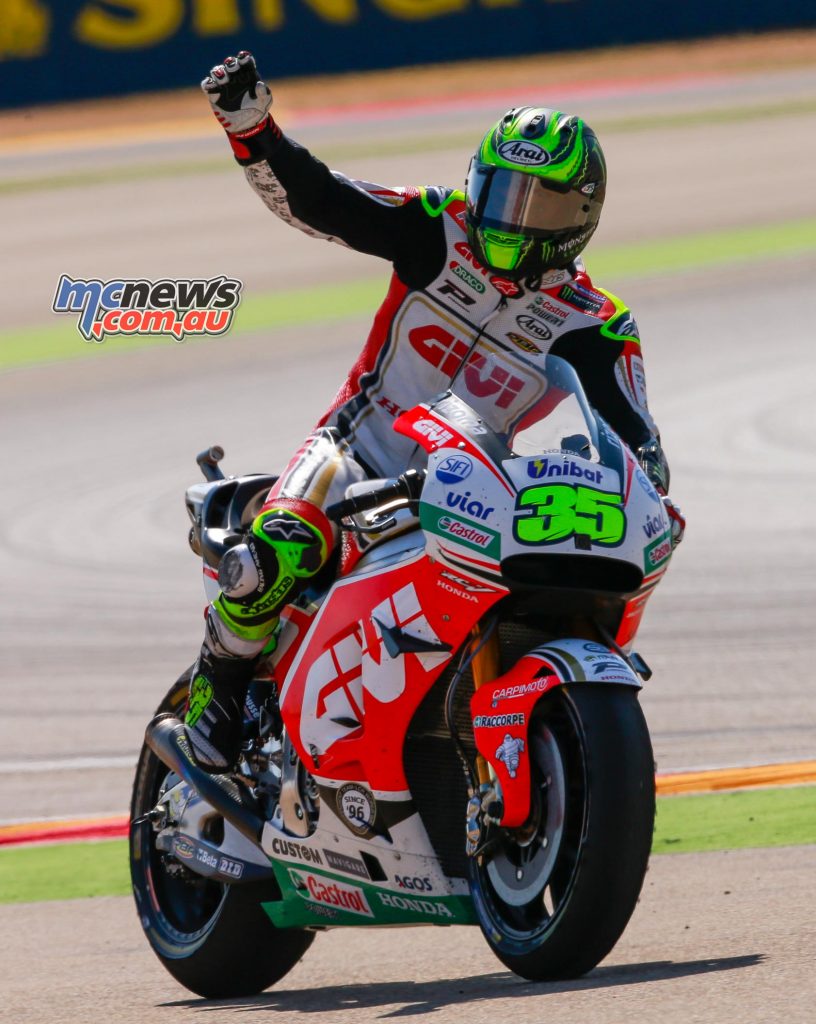 Ducati Team’s Andrea Dovizioso had a tough race despite being a frontrunner in the early stages, and was one of the only bikes in the initial group of frontrunners to have chosen both medium compound tyres. With six laps to go the Italian veteran was under fire from Aprilia Racing Team Gresini rider Alvaro Bautista, with Bautista taking the Ducati to finish in an impressive P9. ‘DesmoDovi’ then found himself taken by the second Aprilia of Stefan Bradl, and ended the race just outside the top ten in P11.

Nicky Hayden’s (Estrella Galicia 0,0 Marc VDS) one off return from WorldSBK to sub for injured Jack Miller was a success for the ‘Kentucky Kid’, as the American scored points in P15 despite never having ridden the bike, tyres or electronics.

The land of the rising sun is the next stop for the 2016 MotoGP World Championship, as the Twin Ring Motegi beckons Marquez back to the scene of his 2014 title win – now 52 points clear at the top.

Sam Lowes (Federal Oil Gresini Moto2) took a stunning win at MotorLand Aragon, as the Brit converted pole position into a dominant Sunday performance. Estrella Galicia 0,0 Marc VDS rider Alex Marquez put in a superb ride to take his first ever podium at his home track in P2, with teammate Franco Morbidelli taking second from the Spaniard on the final lap – only to be taken straight back.

Marquez took the lead from second on the grid at MotorLand Aragon, as the 2014 Moto3™ world champion took off where he left off in FP3 and qualifying – at the front. Sunday dawned overcast and cooler, with air temperatures hovering in the early twenties but no threat of rain, and the field streamed through Turn 1 with Lowes and Marquez leading the way. Lowes shadowed the rider from Cervera before taking back the lead – and then disappeared at the front in a controlled and dominant showing of scintillating race pace to bounce back from disappointment in Misano. The Brit was over three seconds clear by the flag, gaining a good margin of points to those near him in the title fight.

Franco Morbidelli fought his way past Takaaki Nakagami (Idemitsu Honda Team Asia) to hone in on Garage Plus Interwetten’s Tom Luthi, as the Italian-Brazilian lit up the timesheet to pass the Swiss veteran and then set his sights on teammate Marquez – catching him but unable to make it stick, with the EG0,0 Marc VDS garage suffering some late race stress as the teammates dueled it out around the final corner. Morbidelli was also fastest in Warm Up on Sunday morning and shot through the field after a slightly more difficult qualifying.

Luthi completed the top five in front of Nakagami, with the two having more lonely rides to the line as battle raged behind, with Alex Rins (Paginas Amarillas HP 40) emerging top from a four way fight with Lorenzo Baldassarri (Forward Racing), Johann Zarco (Ajo Motorsport) and Simone Corsi (Speed Up Racing). Zarco, who was down in tenth at one point, had a tough race in Aragon but just retains the lead in the title – with the gap now cut to an incredible, single point. The Frenchman has seen Rins rolling with some serious momentum of late, and also had a tough race at MotorLand in 2015 – when on the verge of the title. Jonas Folger (Dynavolt Intact GP) completed the top ten behind Corsi after a more difficult weekend for the German, with the upper echelons of the Moto2™ title fight shuffling every weekend.

Jorge Navarro (Estrella Galicia 0,0) has taken only his second ever GP win at MotorLand Aragon, coming back from some difficult races and bad luck with a spectacular victory – but the man behind him over the line, key title rival Brad Binder (Red Bull KTM Ajo), did everything he needed to do on the day – and crossed the line P2 by only 0.030. Enea Bastianini (Gresini Racing Moto3) completed the podium in third as Binder swept through to take the crown with an incredible final corner – close to the win, but more than enough for the championship. Racing to win has been the South African’s MO in 2016, and MotorLand Aragon was no different.

Bastianini and Navarro maintained their 1-2 off the line, bolting from the pack as their last stand against Binder’s title chances got underway. Essentially needing a win to stay in it or a disaster for the South African, the Spaniard and Italian took off in clean air for a few laps – until Binder started to reel them in.

With 14 of those laps to go, Binder had caught the duo and a front group of the three plus Philipp Oettl (Schedl Racing GP) and Aron Canet (Estrella Galicia 0,0) was formed, with the World Champion elect then sat in the middle of the customary Moto3™ freight train at the front – with Bastianini and Navarro also tagged into the eleven-long group.

The front group became four as the field battled it out and some close calls drew quick breaths, with the three at the top of the title standings joined by Bastianini’s breakaway teammate Fabio Di Giannantonio, with Binder beginning the final laps in P4. The South African knows that situation well – and waited until the last minute to really pounce, breaking incredibly late into the final corner to take the lead briefly, before Navarro just moved through on the inside. With a 106 point advantage before the race and that over Bastianini rather than Navarro, the South African crossed the line World Champion.

Joan Mir (Leopard Racing) had an incredible ride up through the field after a difficult qualifying following suffering a fever on Friday, and the Mallorcan crossed the line in P5 at the head of the second group on his rookie Moto3 world championship weekend in Aragon. Jorge Martin (Gaviota Aspar Mahindra) impressed returning from injury to finish the race behind his compatriot, with fellow Spaniard Canet taking seventh.

With the crown won at MotorLand, Binder becomes the first man to achieve that feat – and inks his name into history not only as only the third ever South African World Champion, but the undisputed King of Moto3 in 2016.

From the back of the grid, from pole position, breaking away at the front or battling on the last lap – the South African has done it all on his title quest and now heads into the flyaways with the throne secure: four races, no pressure, and a new trophy.