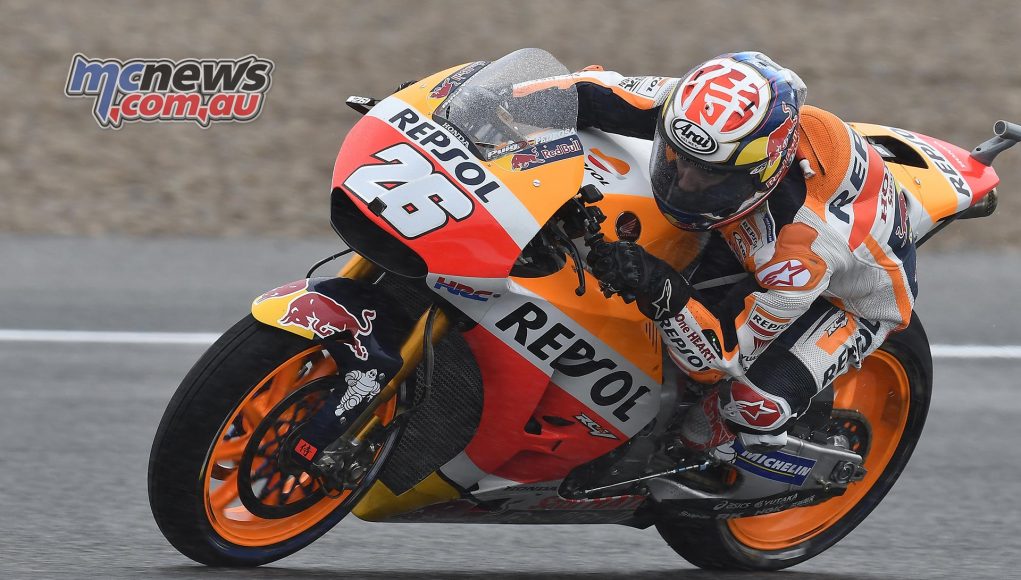 Dani Pedrosa (Repsol Honda Team) topped a wet FP1 in the Red Bull Gran Premio de España, before conditions improved dramatically for a dry FP2 with the same name at the top. The three-time World Champion did a 1:39.420 to go quickest by over half a second, with a stunning laptime from Jack Miller (Estrella Galicia 0,0 Marc VDS) putting him into second as the only other rider in the 1:39s.

“Today we had a good day, positive both in the wet and in the dry. We tried to do as much work as possible, even if the track conditions changed quite a lot during the day. In the afternoon there were still damp patches here and there, but I tried to be fast early because quickly finding a good pace was important. We had two different bike setups and we managed to try both of them, so for tomorrow we’ll be able to be more focused on choosing the best tyres. For sure the air and track temperatures will increase a lot, so tomorrow we’ll concentrate on that and on further improving the feeling on the bike, although it was already very good today.”

“I felt really comfortable on the bike in the wet this morning and was happy to be battling inside the top three. The start of this afternoon’s session was a bit tricky because there were still quite a few damp patches around. But at the end it was completely dry and I was happy with my lap time. I did a 1’39.964 and that’s my best lap here at Jerez. I did that time alone as well and I just feel confident and comfortable with how the bike is behaving around this track. I’ve got some great feeling from the front end and I can put the bike where I want to without being too close to the limit. It’s a brilliant way to start the weekend and hopefully we can build on this for a strong result on Sunday.”

“Today has been very positive for us with Jack inside the top three in very different conditions in the two sessions. We came to Jerez to test last November and that has helped because we have some good information for the set-up of the bike. But Jack is feeling very confident right now and I think that showed today. His confidence has been growing with the three top 10 finishes in the first three races and today was the perfect way to build on that momentum gained so far. We know Jack is strong in the wet, but it was still good to see him showing that this morning to finish the wet FP1 in the top three. The target for tomorrow is to get into the top 10 and go straight into Q2. It will be difficult but right now we are happy and optimistic for the remainder of the weekend.”

Cal Crutchlow (LCR Honda) was P2 in the wet and moved back one place in the dry later in the day to end Friday in third, just ahead of what looked to be an incredible headline as the last few minutes of FP2 approached.

“Probably today’s was my best practice session this season, especially because the sensations in the final run with a new tyre were very good. Every time I get on the Desmosedici the feeling gets better and better and, although we still have a lot of work to do, especially with used tyres and thinking of the future, today we finished positively and I was the first Ducati rider with fourth quickest time. It’s true that we are still some way off the leaders and that tomorrow we will have to confirm that we have made a step forward, but I think that we have margin for improvement.”

Fastest out the blocks in the wet in FP1 for the early stages of that session, the ‘Spartan’ topped the timesheets in the afternoon with a few minutes left on the clock, before ending Day 1 of his first home race of the year in fourth as top Ducati.

Maverick Viñales (Movistar Yamaha MotoGP) was sixth and suffered a fast lowside crash at Turn 9 – only his third during a GP weekend session since 2017 began – and teammate Valentino Rossi also had a more difficult first day in P12.

“I‘m OK. I went a little bit outside of the race line and there were some wet patches. As I told the team, I didn‘t have the chance to pick up the bike again, so I crashed. Anyway, after I exited pit lane again, I was feeling good with the bike. We still have to improve some areas, but I‘m quite happy overall, we did a good lap time. Finally for tomorrow, we have to make a good FP3 to go directly into Q2, so we still have to do some work. I tried the aero-fairing, but we still have to try it again tomorrow, because today the track was 50/50 and it was difficult to understand if it was better or not.”

“The conditions were quite wet today. This morning the track was full wet and the first impression is that with this bike we suffer a bit more. We have to work. In fact, we were not very fast this morning. In the afternoon it was dry, but not completely, so we had to stay cautious because there were some humid patches. In the afternoon we also had some problems. We are not fast enough, so we have to work.”

“It was important to do this afternoon’s session on a virtually dry track because, even though there were still some damp patches, we were able to do a good job and this helps us to be ready for tomorrow morning. Today the conditions were rather difficult and you had to try not to make any errors, but on my quick lap unfortunately I made a small mistake otherwise I would have been quicker. Despite this, my time is not bad, even though I’m struggling to be as quick as I would like in the middle of the corner. Now we’ll have to see what we can do tomorrow, when for sure we’ll find the track surface completely dry.”

P10 was another stunner as Pol Espargaro (Red Bull KTM Factory Racing) took KTM into the top ten for the first time, only + 1.153 in arrears in an awesome performance on Day 1 at one of his home Grands Prix.

Scott Redding (Octo Pramac Racing) was in P11 ahead of Rossi, with Jonas Folger (Monster Yamaha Tech 3) slotting in behind the ‘Doctor’ and teammate Johann Zarco in fifteenth.

Reigning Champion Marc Marquez (Repsol Honda Team) was fourteenth on Friday, but didn’t use the softer option rubber from Michelin to set a time attack.

“Today we focused particularly on working for the race. Of course if you look at the position, we’re far away, but in reality there are already many positives we can count on. This afternoon we spent the whole session on the same tyres and in the end we decided not to go for a time attack because we were concentrating on trying two very different setups and it was important to decide on one of them. We chose one that has many positive aspects and some that we want to improve, so tomorrow we’ll concentrate on finding the best compromise to get better and better before Sunday.”

2014 Moto3 World Champion Alex Marquez (EG 0,0 Marc VDS) was fastest first in a wet FP1 at the Spanish GP and followed up his impressive pace to take back the topspot on Friday afternoon with a 1:43.121 as conditions improved to fully dry. Dominique Aegerter (Kiefer Racing) was second fastest in an impressive Friday for Suter, ahead of Tech 3 Racing’s Xavi Vierge in another superstar performance.

Top rookie was Fabio Quartararo (Pons HP 40), who topped the timesheets briefly in FP2 before then ending the day in P4 despite a crash. Points leader Franco Morbidelli (EG 0,0 Marc VDS) was another crasher, and the Italian ended the day in fifth.

Remy Gardner, who is bravely contesting the Spanish Grand Prix despite still suffering from a severe ankle injury, produced a valiant effort to complete the second practice in 29th.

“I am definitely happy to be back on my bike and I certainly have missed it! Having said that, today’s result is not great, but I am staying positive and we are doing all that what we can. I think that I can climb up the standings and bring home a half decent result on Sunday so we have to keep working. My ankle is painful and it gets really tired after a while, plus it bleeds where they made the cut, yet, we’ve just got to push through and do our best so I will stay determined.”

There were some crashes on Day 1, including incidents for Andrea Migno (Sky Racing Team VR46), Tony Arbolino (SIC58 Squadra Corse), Philipp Oettl (Südmetall Schedl GP Racing) and John McPhee, but conditions were almost completely dry by the end of FP2, although laptimes hovered some way above lap record pace.

Fourth in a slightly shaken up order further back was a stunning performance from Darryn Binder (Platinum Bay Real Estate), with Livio Loi (Leopard Racing) completing the top five ahead of Tony Arbolino, who took sixth despite his crash. Red Bull KTM Ajo rider Niccolo Antonelli was P7, with teammate Bo Bendsneyder having a tough first day down in P22.