Boris on the battle of Brno | Tense, Taut and Terrific

Brno, the stunning, up-down-round-and-round Adrenaline Factory (as it would like to be known), nestled in the woods behind Karel Abraham’s family home…oops, the woods of the Czech Republic, I mean, was tension incarnate.

I have been lying down and being fanned by a slave girl since Sunday night, such was my state by race’s end.  It was not the cage match that Assen was. We’re not going to see a race like that for a while, I reckon. But it was as tension-filled as a circus tightrope.

And it delivered two quite astonishing things.

The first was seeing Rossi hare off the start to lead into Turn One.

When was the last time the Doctor led into Turn One off the start? From second on the grid?

The second was seeing Jorge Lorenzo actually race his Ducati. And I mean really race. Like the multiple world champion that he is.

There had been yet further ergonomic adjustments to the Mamba’s fuel tank. His factory Ducati – already one of the ugliest, bitsa-looking bikes on the grid, was made even more exotic by these changes, and allowed Jorge to rest his arms with still greater comfort. Apparently.

It certainly seemed to work. For the entire length of the race Lorenzo was always in contention for the top step of the podium. And had him and Marquez not engaged in the duel towards the end of the race, Dovizioso might well not have won.

As surprising as it was for me to see Lorenzo banging handlebars like a Moto3 racer, I cannot imagine how Marquez and Dovizioso felt to suddenly have the Mamba cutting them up. 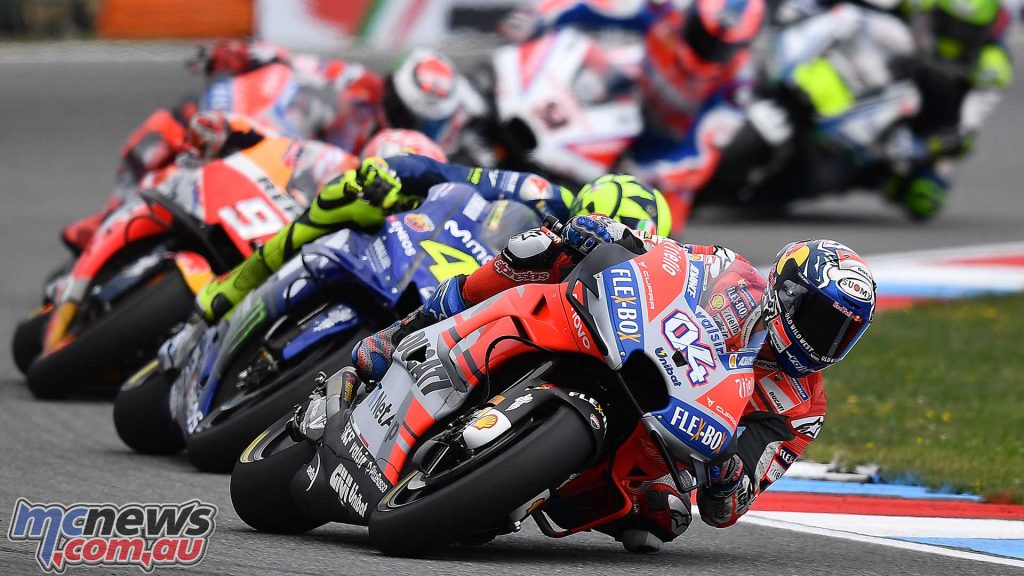 Everyone, including me, has told themselves Lorenzo cannot actually race bikes when there are more bikes involved than the one he is on. He excels in getting out the front and becoming a human metronome, cutting lap after identical lap, wearing his pursuers down and relishing the clear track ahead. But when it comes to swapping paint, and the ruthless cut and thrust of battle…well, he’s just not into that.

He was into it, of course, once upon a time. But he was younger then. As Oliver Wendell Holmes Jnr observed back in 1884, “In our youth our hearts were touched with fire”. Lorenzo’s as much as anyone’s.

I think the fire might be touching his heart again, judging from his performance. And he was literally glowing after the race. I guess the Adrenaline Factory worked overtime on him that day.

Even the Old Guy had some fire going. Rossi briefly led during laps nine and 10, but as always, the ongoing tyre-eating problem the Yamaha’s seem to have consigned him to battle for fourth with Cal Crutchlow.

Crutchlow ever so briefly hauled himself into contention at the pointy end. The reason he could do this was that in a bid to conserve their tyres the front runners ran consistent 1:57s for most of the race.

The race commentators had predicted 56s. Practice and Qualifying had reinforced that view. Race pace was going to be in the 56s.

But race pace was in the 57s. So of course Crutchlow was able to get to somewhere near the fast blokes.

Then as the race began to reach its climax in the final four laps, 56s began to appear at the front. First by Lorenzo, and then by Dovi – who despite being challenged several times by both Lorenzo and Marquez, rode a superb, controlled and decisive race.

Petrucci and Zarco, sixth and seventh respectively, struggled to keep up with the crew at the front, though Zarco (who since his crash at Le Mans just hasn’t been a player) is making noises about feeling better about things.

Dani finished behind them, still mildly lamenting how uncomfortable he is on the bike. He’s just too polite and professional to tell people what he really thinks, and I am hoping he will write a tell-all when he finally retires.

The rest of the field just seemed to be treading water around the elevationally exciting Brno, and the cameras stayed firmly clapped onto the front runners.

So much so that we didn’t even see when Rossi broke Crutchlow’s heart on the last corner, relegating the Englishman to fifth, while the usual suspects strung themselves out behind the leaders in a race that had everything – the tension-building processional grind, spectacular passing (by Jorge no less!), and a bit of a crashfest on the first lap from the luckless Vinales, who got tangled up with Bradl, Smith and a lot of Karel Abraham’s dad’s gravel. Redding also trowelled it a few laps later, but everyone seems pretty used to that by now so I’m not sure anyone really noticed.

What everyone did notice was Lorenzo.

Oh, and the fact that both he and Dovi pasted Marquez.

The next race is in Austria.

You remember Austria, don’t you?