by Ryan
in BMW Reviews, Ducati Reviews, Features, Motorcycle Racing
A A
Share on FacebookShare on TwitterShare

Andrea Dovizioso recently set a new MotoGP maximum speed record at Mugello when he clocked an eye watering 356.5 km/h during the race on the Factory Ducati. Besting the previous record of 354.9 km/h set in 2016, also at the Italian circuit.

Ducati has pretty much ruled the top speed roost since the Desmosedici joined the ranks of MotoGP some 15 years ago.

Below are some top speeds recorded at different times comparing various bikes at Mugello, including a stock BMW S1000RR road bike.

Right from the introduction of the four-stroke era in the premier class back in 2002, top speeds have been increasing incrementally north of what the two-strokes could muster from their ferocious smaller capacity motors.

As speeds at some of the faster tracks, such as Catalunya and Mugello, got north of 330 km/h, Dorna became concerned and recognised that these speeds could present an  unnecessary safety risk in a sport that was already dangerous enough.

For the 2007 season Dorna slowed the bikes down by introducing new regulations that saw engines shrunk from 990 cc to 800 cc. The idea was a smaller motor would have less potential to make the kind of power that would propel a motorcycle and rider to the speeds we had seen with the 990 cc machines. The new 800 cc variants lost around 20 km/h of top end speed at some of the fastest tracks compared to their 990 cc predecessors.

Goal achieved right…well no, the 800 cc bikes were faster around the corners than the 990s, so potentially more dangerous, but it didn’t take long for the 800 cc machines to also start matching the top speeds of the 990s that they had superseded…

Dani Pedrosa actually broke the Ducati top speed stranglehold in the 800 cc era after the diminutive Spaniard clocked 349.3 km/h at Mugello in 2009, setting a new outright speed record at the time.

The fastest of the 800 cc bikes were said to be making their peak power around 20,000 rpm. Dorna had made the engines smaller, but the MotoGP technicians just made them spin harder and eventually make more power.

For 2012 we were back to litre MotoGP bikes, whether that be for safety, or MotoGP wanting to relate a little more to the manufacturers production superbikes, in terms of displacement and development hand-me-down purposes. Either way we were back to monster power and slowly the speeds of the machines started to creep up once again, and it was Ducati leading that speed charge.

For some perspective, during the era of 190 horsepower, 130 kg two-strokes, the highest speed achieved at Mugello was recorded by Max Biaggi back in 1999, where he busted through the speed trap at an impressive 318.6 km/h aboard his Marlboro Yamaha YZR500.

It’s hard to comprehend something being more accelerative than one of those ballistic and evocative smelling machines – but today’s machines are 38 km/h quicker, a figure that is pretty mesmerising.

To be fair to the little two-strokes, modern electronics and tyres would’ve seen them reach slightly higher speeds at Mugello, as translating their brutal power delivery in to forward momentum was uniquely challenging, and a completely analog affair totally reliant on clever carb/power-valve tweaking and a delicately skillful hand.

Ever since the four-strokes replaced the two bangers MotoGP bikes have been rumoured to be making “More Than 250 hp”, it’s an unchanging claimed figure that has been put out numerous times by bike publications fed by MotoGP teams and insiders.

Just recently though Danilo Petrucci mentioned that his Pramac Ducati is making 280 hp! Whether that is at the wheel, flywheel or crank or is even a true statement is anybody’s guess.  Nonetheless, we know that these machines make enormous power that is only made useful and effective with the incremental advancement of electronics. 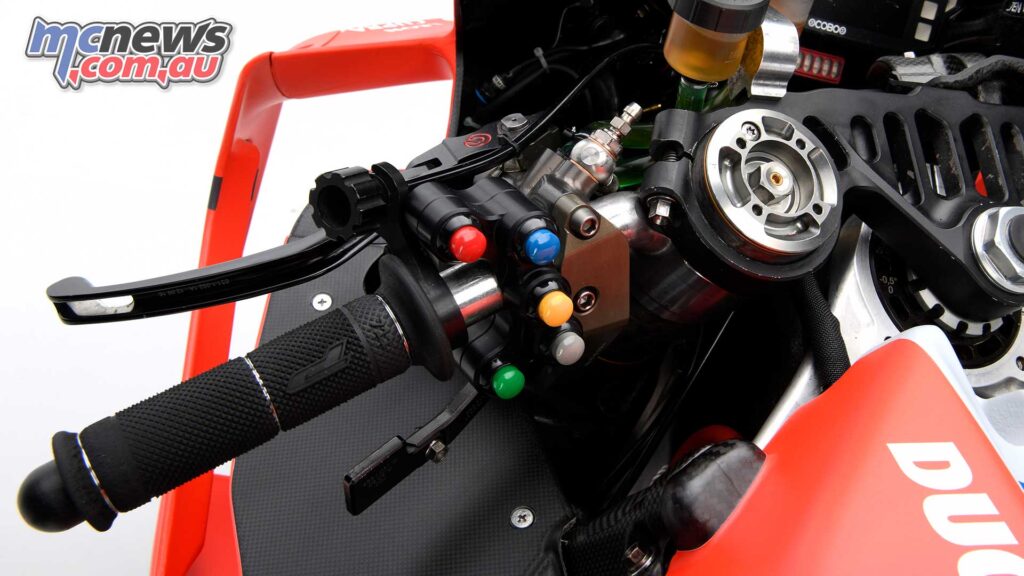 The Power these machines make would almost be totally useless if it were not for their amazing electronic packages that make them controllable. It would not be possible to put “250 hp plus” down in the first 3 or 4 gears effectively without the electronic wizardry that makes it possible. With 250 hp plus and no electronics, it would go one of three ways, spin, loop or acceleration killing modulation of the throttle.

Without electronics making power usable MotoGP bikes would likely be faster with a solid 200 hp or so of usable horses. What we have today are 250 hp plus bikes that are surprisingly usable given their massive output, and that’s why we are seeing these insane speeds. The slowest bike at Mugello this year hit 339 km/h, that is still some 20 km/h up on the fastest two-strokes!!

Even for those of us that have ridden the latest ‘claimed’ 200 hp superbikes, and are familiar to their insane turn of speed, it’s still hard to get your head around 356 km/h and then having to hit the picks for the next turn!

Mugello’s main straight is just over a kilometre long, (1141m) and at least 300 metres of its length is required to haul up 230kg of motorcycle, fuel and rider, braking from 350 km/h to 120 km/h in order to make San Donato, if you are not to faceplant the kitty litter that is.

So there is only about 850 metres of useful tarmac, give or take, to go from the last corner (Bucine), where GP bikes apex at 100 km/h, before cracking 350 km/h in well under a kilometre. Impressive.

Our road bikes have gotten crazy fast in recent years, and again its electronics that have made their ‘claimed’ 200 hp usable on the road. It’s a sobering fact, that any of the current litre sport bikes straight from the showroom are all faster in a straight line than megabuck factory Superbikes from only 20 years ago.

Equally impressive is that your S1000RR, stock at Mugello, in the right hands would hit an almost real 300 km/h before needing to haul up for San Donato. That’s only 20 km/h off the fastest GP500 of the two-stroke era. If you junked the road gear, bolted a full system and PC5 you’d be not far off or even match an old school Grand Prix two-stroke in terms of straight line get up and go!

When the difference between acceleration of two machines is literally put into perspective, it’s fascinating and humbling at the same time.

Here’s a true story; A few years back while residing in Italy, I was aboard my stock 2002 Yamaha YZF-R1 and was having a spirited play with a local lad on his 2008 Kawasaki ZX-10R. I was leading and fast in my own head while we were enjoying some nice long smooth sweepers. Despite my enthusiasm, I was clearly holding this local chap up, and he was evidently late for his Arvo sonnellino pomeridiano as he was right up my exhaust. There was a particularly nice sweeper that opened up into a long straight, and in a country where they really do not care how fast you ride, it would have been rude not to, so in second gear as it opened up, I nailed it through the box. Faultless clutch-less gear changes ensued one by one until I was in top, chin on the tank while I IOMTT’d it up in Regione Di Lombardia.

I had 150 hp worth of angry explosions launching me forward at daft speeds, nothing could wiz past me…nothing! Remember… thing is, I was not alone, there was a fella on a newerer and shinierer piece of metal and plastic, and he had more power horses than me, probably 30 odd more at the wheels. The ZX-10R went past me just as I hooked third, then by the time I was in top he was at least 100 metres or more ahead of me. It was a clear example of what 5 years of engine development can do.

When hooking gears on any modern litre bike, it’s pretty hard to imagine something overtaking you. Let alone walking away from you like you have an anchor dragging in the dirt. Even by today’s standards the 2008 kawaski ZX-10R is still extremely fast and was, at the time, the fastest accelerating litre class motorcycle until the BMW S1000RR came along and spoiled its party.

HOW FAST DOES A MOTOGP BIKE ACCELERATE?

There are no actual claimed acceleration numbers for MotoGP bikes, nor has anyone recently tested one at the strip and told the tale. Despite this, it is not hard to deduce how one would accelerate from zero to flat-out. There is even a YouTube video or two showing Dovi Acccelerate from 0 to 300 km/h, and 300-350, and its kindly been timed.

With that in mind, some insider info and a few healthy assumptions and educated guesses. We can work out with some degree of accuracy how fast Dovi’s Desmosedici GP18 can accelerate from zero to silly. We’ll just need to sprinkle the former with a little science – by putting some numbers through the MCNews.com.au Supercomputer and hopefully, it’ll vomit out some realistic numbers which we’ll plot against an Alpha road bike for some interesting comparison.

Now, these figures may not be an exactly precise representation of a MotoGP bikes acceleration, but the tables will give you a pretty good indication of how fast they bend the space time continuum. You will also find the numbers accurately match the evidence from onboard footage.

The BMW S1000RR is arguably the fastest accelerating production litre bike to date but how does it stack up against the fastest MotoGP Bike?

The above is an interesting comparison, and while the data I have presented is very likely not 100% accurate, what we can learn from it will provide an accurate enough illustration of the performance of a current MotoGP machine and how a current Alpha road bike such as an S1000RR might compare.

It’s exciting that the bikes we can buy now from the dealership are faster than factory WSBK’s from 20 years ago, and nudging at the straight line performance of the two-stroke Grand Prix machines from the same era.

Maybe 10-20 years from now we’ll be riding road bikes that accelerate like the Desmo GP18. Will they be powered by engines as we know them, or will they be electric only, or perhaps a hybrid…?

It’s even more fascinating to speculate what Ducati’s GP48 will be like, and how fast it might be if we continue on this performance arc.

Interestingly and matching Petrucci’s claims that his Pramac Ducati made 280bhp, to achieve the acceleration times in our graph, our virtual Ducati needed 285bhp.

Update: The MotoGP top speed record has been broken once again this time at the recent Mugello Round this season with Dovizioso and Ducati hitting 356.7 km/h. 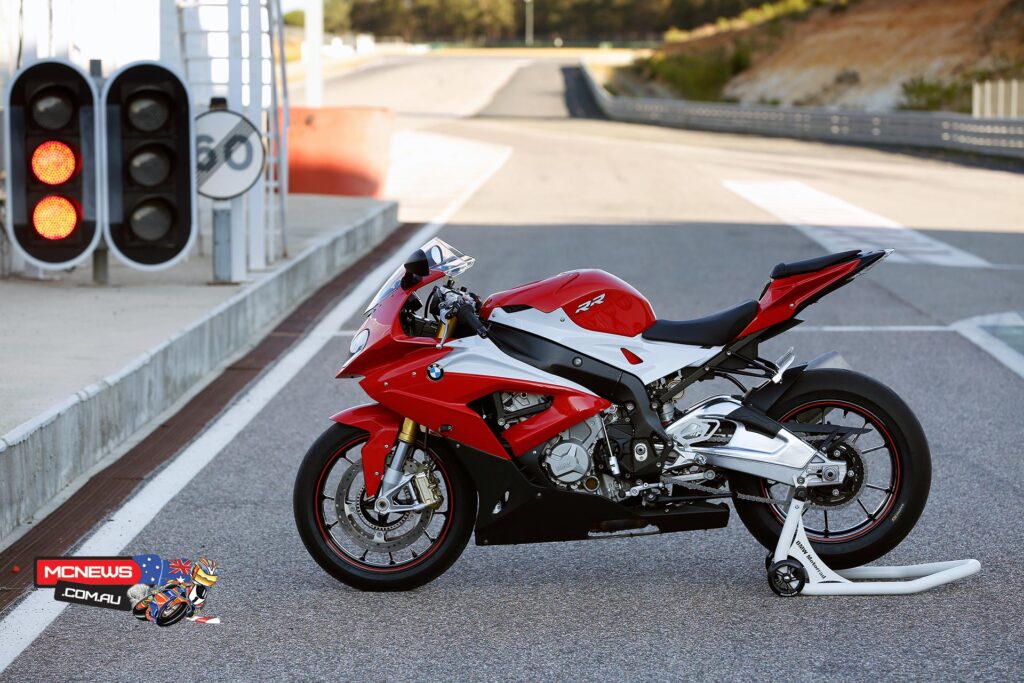