There was a ruler of Phillip Island, and that ruler was Casey Stoner. The man whose name adorns Turn 3 of the venue won six in a row of his home GPs, and the Australian two-time MotoGP World Champion’s home domination skews the statistics.

2013 saw a black flag incident and a Lorenzo win, 2014 tyre woes and a Rossi triumph, and 2015? 2015 staged one of the greatest races in the history of motorsport – and may prove the best clue as to who will rule Phillip Island this year. The new King could well be the man who just took his third premier class crown in four years: Marc Marquez.

It was a tough season for Repsol Honda Team’s Marquez in 2015, but the Australian GP was a trademark stunner – a victory taken on the final lap and through the final corner. Making up an incredible margin on early leader Jorge Lorenzo (Movistar Yamaha MotoGP), the rider from Cervera came, caught and conquered. 2013 was a DNF after a black flag and 2014 a crash out the lead – making 2015 the only hand Marquez has shown over race distance at Phillip Island. If that doesn’t seem quite enough to load the dice in his favour, he has done it before.

Before Marquez won a wet Moto2 race from the back in Valencia in 2012, he almost managed the same in Australia a year earlier – in the dry. P33 on the grid in Cheste saw the then Moto2 World Champion gain 32 places to take that win in his final appearance in the intermediate category, but his rookie Moto2 race at Phillip Island saw Marquez turn 38th into a podium finish. No tough weather or difficult conditions, and no lady luck. The rider from Cervera simply set off, got his head down and overtook 35 people.

The man who ruled the Island before Stoner stole his crown was Valentino Rossi (Movistar Yamaha MotoGP). The legendary 9-time World Champion was Marquez’ biggest title roadblock, but after a costly mistake on the brakes in Motegi will now have his elbows out to ensure he takes P2 over nemesis and teammate Lorenzo. With six wins at the Island and five in a row from his first in 2001, Rossi’s record at the venue is a stunner – and his record in 2016 proves him a contender for every victory. The ‘Doctor’’s modus operandi since the gap to the top of the title standings opened has been simple and effective in most races – put in the laps, push to the limit, and let others’ cards fall where they may. After a loss of face in Japan, the Italian legend will be out to put that right – and knows Marquez may now be willing to take more bait.

Jorge Lorenzo is another who has a good track record at the Island, with a win in 2013, a P2 the year after and an even harder-fought second place last year making up part of his five-podium tally at the track – a good run behind Stoner when the King could not be overcome. Lorenzo also wrapped up his 2012 MotoGP World Championship campaign by taking the crown in Australia, and the ‘Spartan’ can never be ruled out. Still 14 points behind Rossi heading into the final three races, the Yamaha rider’s focus now shifts to the battle for second after the costly crash in Motegi. Bruises from his FP3 highside in Japan will be much more distant by the time the lights go out in Australia, however, and the Mallorcan 5-time World Champion rarely makes the same mistake twice – something he will be aware of as the final corner of the Island approaches with lessons from 2015.

Maverick Viñales (Team Suzuki Ecstar) should be another to watch in this year’s battle in Australia. With 2015 protagonist Andrea Iannone’s (Ducati Team) recuperation from a broken vertebra seeing the Italian still out of action and replaced by Hector Barbera, the man seemingly most likely to be cast in his place is Viñales – and Rossi’s future teammate is trying to lock down P4 in the title. Rival for that fourth in the standings is Dani Pedrosa (Repsol Honda Team) – but the 3-time World Champion will miss the race following his horrific highside in Japan and subsequent broken collarbone.

Iannone’s teammate Andrea Dovizioso was the man whose calm and well-judged management of Motegi saw him gain the most, taking a well-deserved 20 points at the venue – and moving ahead of Cal Crutchlow (LCR Honda) in the title fight; in range of Pedrosa in P5 as the Spaniard is forced onto the sidelines.  Crutchlow will be aiming for the accolade of top Independent Team rider once again as he continues his vein of rich form following his win in Brno, with Pol Espargaro (Monster Yamaha Tech 3) and Octo Pramac Yakhnich duo Scott Redding and Danilo Petrucci sure to make that fight another classic.

Assen winner Jack Miller (Estrella Galicia 0,0 Marc VDS) will be another Independent Team challenger and flying the flag at home. The Australian is now a GP winner and a regular points scorer, and will be looking to put on a show on the Island – the circuit having treated him well in the past.

Mike Jones makes it two young Australians on the MotoGP grid as the Queenslander has again been drafted into the Avintia Ducati squad after making his debut last weekend at Motegi.

There are venues that lend themselves to legend, and Phillip Island Grand Prix Circuit is one of them. The canvas for MotoGP’s 2015 masterpiece is already woven into the fabric of history, and the venue now begins to wake for the coming weekend as the freight from the Twin Ring Motegi starts the journey south. FP1 sees MotoGP out on track at 10:55 local time for the first time on Friday – with Marquez ready to remove his shackles.

Zarco pulls clear as Rins faces another fight back

The Moto2 World Championship in 2016 has so far been a mammoth, high octane showdown– and tumultuous. With different winners and leaders, it had seemed that Johann Zarco (Ajo Motorsport) had then gained some real traction in the Championship until things started to go awry. A clash at Silverstone with Sam Lowes (Federal Oil Gresini Moto2) was a low point for the Frenchman as a penalty saw him demoted to P22 – and key rival Alex Rins (Paginas Amarillas HP 40) rode to P7 despite a recently broken collarbone. The chance for the Frenchman to be the first man to defend the intermediate class crown since Jorge Lorenzo in 2007 suddenly seemed precarious – until Motegi.

Rins crashed on Friday, and injured his shoulder. Not within the top twenty in any session of the weekend after struggling with the problem, the Spaniard was 22nd on the grid – and knew he had to make a charge. That pressure saw the title contender slide out of contention at Turn 1 on Lap 1 – remounting but not scoring, and his deficit to Zarco back up to 21 points. P3 man in the standings Sam Lowes (Federal Oil Gresini Moto2) was next to fall.

The big winner was Garage Plus Interwetten’s Tom Luthi. Ominous throughout the race weekend and making good on that as the lights went out, the Swiss veteran took a lights-to-flag victory from P2 to holeshot to impressive gap at the front. With Zarco unable to chase him down, the former 125 World Champion’s 25 point haul saw him overhaul Lowes for P3 in the title – and very much still in with a chance. A dark horse with no pressure – as was Lowes until falling out of real contention in Japan – Luthi has experience and pace on his side. 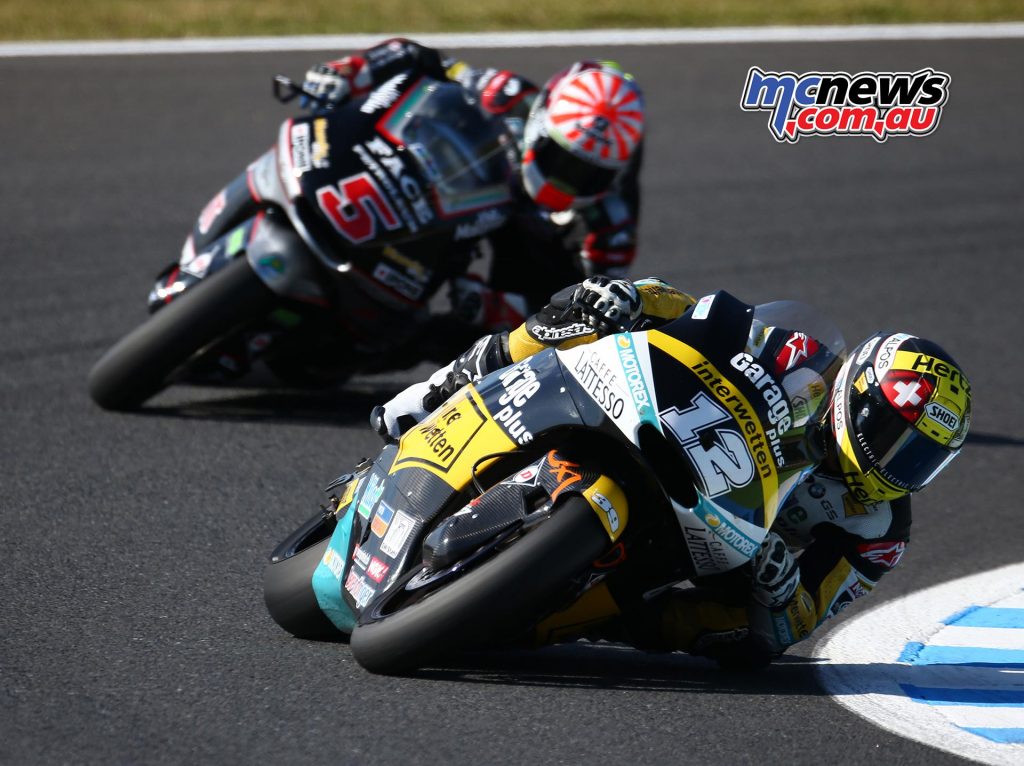 Podium contenders in 2016 have been many – amongst whom are Franco Morbidelli and Alex Marquez (Estrella Galicia 0,0 Marc VDS), Lorenzo Baldassari (Forward Racing Team), Takaaki Nakagami (Idemitsu Honda Team Asia) and Jonas Folger (Dynavolt Intact GP) – a host of race winners and fast riders with a World Champion thrown in for good measure. Together, a daunting task for any rider to face down on the hunt for a title. Add in the many others with the pace to get in the mix at the front and the gap may seem big – but in motorcycle racing, everything can change in one corner.

Last year, Phillip Island belonged to then-rookie Alex Rins, with a 6.6 second margin of victory for the Spaniard in an awesome display of pace. This year, he must make history repeat itself if he wants to close in on Zarco once again – and the incredibly close Moto2 field of 2016 will all be lining up to write their own chapter at Phillip Island.

Enea Bastianini (Gresini Racing Moto3) took his second career victory at the Twin Ring Motegi, and in doing so the Italian gained a good 25 point haul to add to his tally towards second in the Championship – with key rival and Aragon winner Jorge Navarro (Estrella Galicia 0,0) crashing out and not scoring. Now clear of the Spaniard, Bastianini took a serious advantage on race day in Japan – but there are still three rounds remaining in 2016 and a maximum of 75 points on offer.

Bastianini’s last lap lunge in Motegi saw him turn the tables on newly-crowned Champion Brad Binder (Red Bull KTM Ajo), after the Italian had found himself on a good podium run but with a victory drought. Now a winner once again, the Gresini rider has some breathing space over Navarro – but in the shuffling pack of Moto3, a buffer can disappear in an instant.

Navarro also suffered a dislocated shoulder when he crashed out in Japan, and the Spaniard will have to be declared fit to race in Australia. Last year, he was fourth in his first full season, however – behind Brad Binder.

Binder took a podium in 2015 in P3, as his future 2017 teammate Miguel Oliveira took the win in his final Moto3 campaign. With the pressure off and now somewhat transferred to the men locked in the fight over second, the 2016 Champion can push as hard as he wants in Australia – but will have his two front end washouts from Friday in Motegi on his mind.

The fight for Rookie of the Year and P4 in the title is still locked together, with Nicolo Bulega (Sky Racing Team VR 46) leading the charge after crossing the line in P4 in Japan and then being promoted to the podium as Hiroki Ono (Honda Team Asia) was disqualified for being under the weight limit. Joan Mir (Leopard Racing) isn’t far behind his Italian 2015 FIM CEV Repsol rival either, and the Austrian GP winner also has Bastianini’s rookie teammate Fabio Di Giannantonio for close company. With three races to go, mistakes will now heavily penalize any of the three.

One Australian should be on the grid at his home race, with Matt Barton putting in a wildcard appearance for Suus Honda – as he did in 2015. The youngster’s second appearance at his home Phillip Island Grand Prix Circuit will see Barton hoping to take a solid finish for the home crowd.

Karel Abraham back in MotoGP for 2017

Daniel Sanders looks to go one better in 2017