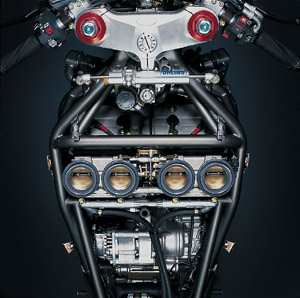 While in Queensland for the 3rd round of the Shell Advance Australian SuperBike Championship I had an MV Agusta F4 at my disposal courtesy of the nice chaps at the Paul Feeney Group, Australian distributors for MV and Cagiva.

My first few days with the MV were spent commuting to and from the track and general round the town type of trips.

First thing that struck me when hopping onboard the MV is the fact that the bike feels small, even a little cramped. However when you get accustomed to the riding position you find yourself extremely comfortable. I covered around 450 kilometres in one afternoon along some very bumpy roads and emerged free from any soreness.  Thousand kilometre days on the MV could be accomplished quite easily. Around town maneuvering can be a little difficult due to the limited steering lock, but it is no worse than any comparable Ducati in this respect.

When you hit the road for the first time you immediately notice the astounding amount of feedback that the fully adjustable Showa 49mm USD front forks and Sachs rear shock provide. You feel every ripple and pebble on the road. This is a little disconcerting at first but once you get familiar with the way the MV talks to you and have modified your thinking to deal with all that feedback the MV inspires a level of confidence that not many can match.

The chassis is extremely taut but the initial stroke of the suspension is just supple enough to deal with all but the hardest of hits so the MV is no kidney puncher when the road turns a little nasty.

Mount Nebo, Mount Glorious and Kilcoy were some of the places we passed through and a better test of a bike’s suspension I could not think of.  I am pleased to say I came away quite impressed.

In the corners the MV is nearly unflappable. When pushing things a bit hard on some extremely bumpy and tight sections I 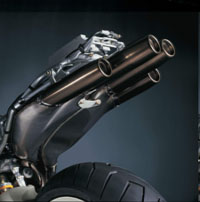 did get one or two bar-to-bar slaps but the MV never threatened with anything near a serious tankslapper. I think the adjustable Ohlins steering damper was to thank for that.  I can think of a few Japanese sportsbikes that would have been in convulsions through some of the terrain.

When committed to a cornering line the MV holds rock steady, if rushing in very hard the bike can try to run a little wide but if you adopt a more aggressive, and technically correct, riding style then the MV can be tightened back on line without too much effort.  I think this trait shows itself because of the fact that the MV carries around 20 kilograms more than bikes such as the GSX-R, Fireblade or R1.

I would like to try the MV on tyres that have a more aggressive turn-in than the Pirelli Dragon Evo’s that were fitted to the test bike.  Tyres such as the Bridgestone BT010R or Dunlop 207RR maybe.

The 750cc engine needs to be kept revving to extract the best from it but slotting up and down through the 6-speed is definitely no chore.  You have to work for the speed from the engine but it is rewarding when you get it right.  This is also the same for the handling which requires a bit more body language from the rider than what a Japanese sportsbike needs, just like a Ducati.

Engine output is no match for the awesome unit that is fitted to the GSX-R 750.  However, that is not too much of a huge criticism as the last time we took an R1, Fireblade and GSX-R 750 to a strip, the GSX-R 750 won the stoplight drags every time against the bigger bikes.

But the balance of engine and chassis is mated perfectly in the MV.  I do feel that if the MV had a lot more power then the bike would become quite a handful but as it stands the MV Agusta F4 works brilliantly as a package.

Why the bike has a 17,000rpm tacho when the rev-limiter is set at around 13,500 I can’t figure?  Instrumentation is quite nicely presented in an attractive binnacle but I suggest that it could be easier to switch through the functions.

The bike does make a tasty induction roar and the pipes fitted to the bike I rode had been modified to emit quite a nice bark, which then evolves into a glorious wail as the revs rise.

Braking performance offered by the 310mm discs and 6-piston calipers is excellent. The 210mm disc out back is also surprisingly effective.

Now to how the MV Agusta F4 looks. As a journalist I am supposed to be able to convey thoughts into meaningful words in order to get my message across but the F4 is just so damn incredibly gorgeous that no amount of words could ever convey the true fact. The $28,990 (AUS) MV Agusta F4 is simply the most beautiful 2-wheeled creation I have laid eyes on.

When stopping at some road-works for the fellow holding the stop/go sign walked up to me and said the following: “M-a-ate, I have had Ferraris, Lamborghini Diablos and all sorts of Ducatis through here but this bike is it. Man I can appreciate the beauty in that so much.”  Then he switched the sign from stop to slow and asked, “Don’t worry about the slow sign show me what this baby goes like?”.   And of course I did not sit the MV on the back wheel for a few gears to make his day, honest……..

Do yourself a favour and get to see one in the flesh, I can guarantee that you will be truly mesmerized.  Better still try and get a ride on one, not just a lap around the block as that tells you nothing, but a proper ride.  The MV has definitely become another number on my wish list. 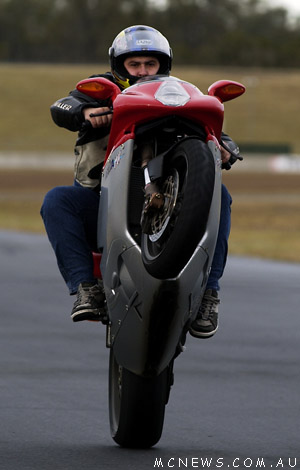 One mad and very bad dragbike

Bimota - From beginning to end