Take a walk through the MV Agusta Museum with Phil Aynsley

by Phil Aynsley
in Features, MV Agusta News
A A
Share on FacebookShare on TwitterShare

The museum building is located next to Milan’s Malpensa airport in Cascina Costa, where Giovanni Agusta moved his aircraft manufacturing business in 1923. Both the company’s aeronautical and motorcycle history are on display.

The name MV Agusta rarely brings scooters to mind but the company produced tens of thousands from 1949 up until 1964.

A distinctive feature of most of their scooters was that the motors were exposed, not enclosed like nearly all other scooters. The final model, the 150 Chicco did use an enclosing pressed steel monocoque chassis together with a bespoke engine.

A museum visit really is a must for anyone interested in motorcycles – particularly red ones!

When Piero Remor moved from Gilera to MV Agusta in 1949 he began work on a DOHC 500/4. This bore a very close resemblance to his Gilera design and had some strange design features such as seperate gear levers on each side for up/down changes.

It first raced the following year. This 1951 version had a conventional gearshift but retained the Earls fork and twin carburettors mounted on Y-shaped manifolds. 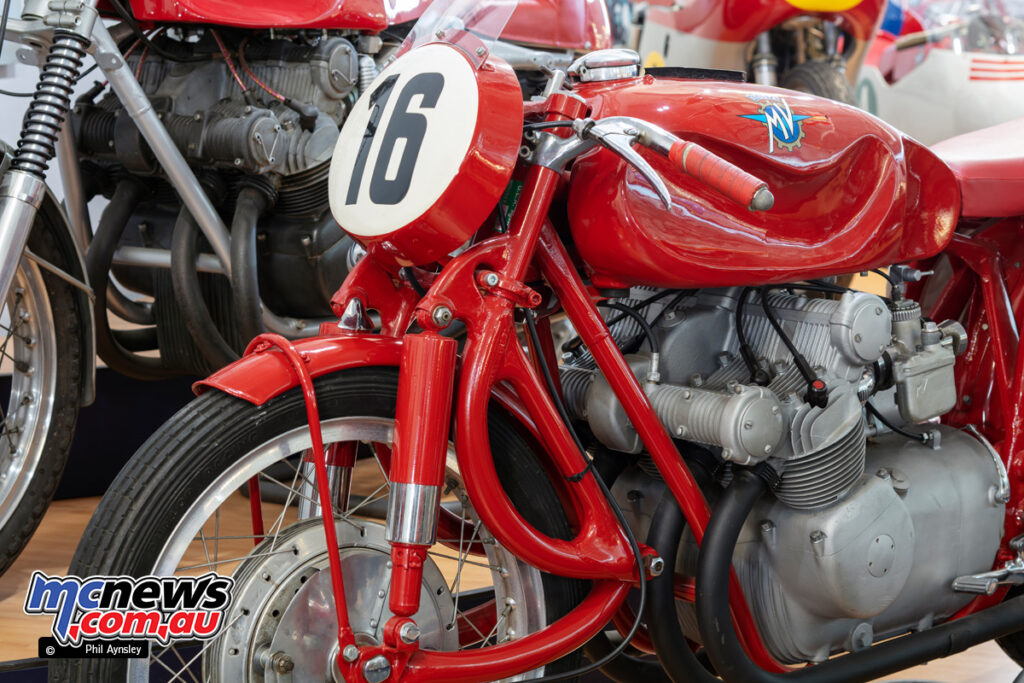 Helicopter engineering is also proudly on show throughout the museum.

Two contemporaries – Agusta’s first (’58) in-house helicopter prototype, the A.103 and a 150 Rapido Sport. Count Agusta moved his aircraft manufacturing to Milan in 1923.

He began manufacturing the Bell 47 under licence in 1952 and helicopter production continues to this day. The 150.1cc RS was introduced in 1959 in response to the new law prohibiting bikes under 150cc from using the autostradas.

A one-off built to transfer guests from the dock to Count Aguata’s house in Portofino.

A 1967 250B. Like most Italian motorcycle manufactures police and military models played an important part in their range.

In 1945 Meccanica Verghera Agusta introduced its first motorcycle – the Vespa! The name was soon changed when it was discovered Piaggio had already registered it.

This sole 350 Bicilindrica Corsa was loosely based on the proposed 300B road bike (only a show bike was built, without engine internals).

While the 300 used a high-cam/short pushrod design, the racer had a gear-driven DOHC set up. On the test bench the motor produced 46.5 hp at 12,000 rpm – not good enough to justify replacing the existing 350 racers.

The 1963 125 cc disc-valve 2-stroke prototype. A seven-speed gearbox was fitted.

The 1964 250 Bicilindrica featured a motor that was basically two 125cc singles siamesed together. It won two World Championships, in 1956 and 1958.

A very small number of the trophies won by MV riders, including a IoM TT trophy.

The four-wheel Vetturetta prototype from 1951 was powered by a 350 cc 4-stroke motor. 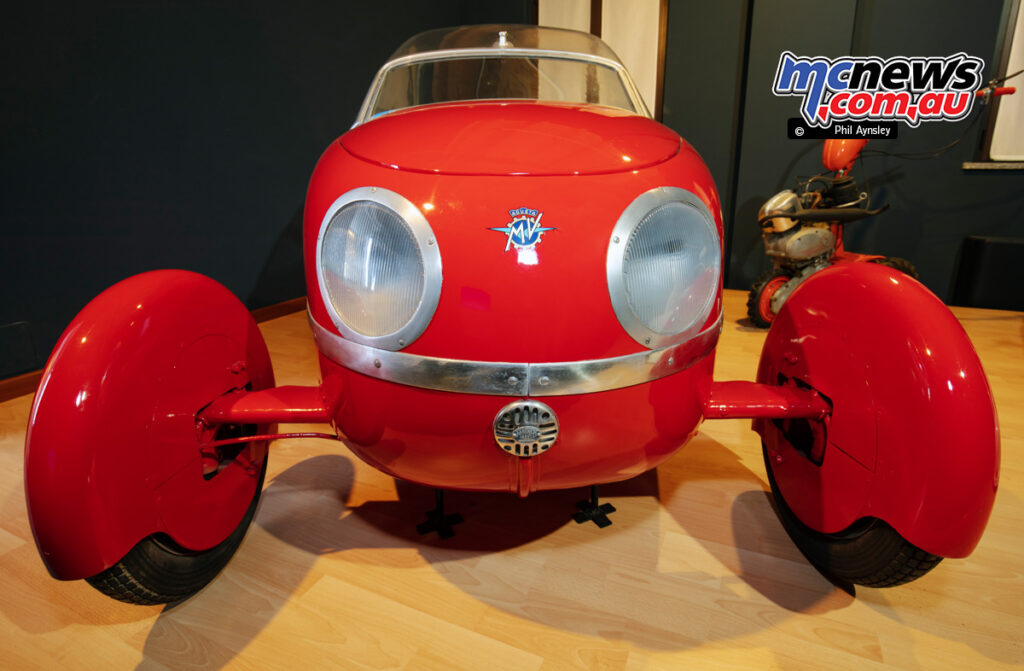 Certainly one of the rarest MV Agustas ever produced! One of the 50 1962 Motozappa 188 70 cc tiling machines built.