by Trev
in American Road Racing, MotoGP, Motorcycle News, Motorcycle Racing, WSBK
A A
Share on FacebookShare on TwitterShare

Born into a large extended Catholic family in Owensboro, Kentucky, Nicky was the middle child of Earl and Rose Hayden, with two brothers and two sisters. The entire family loved motorcycles, and shortly after he could walk, Nicky declared that his dream was to be a world champion. Although life on a farm meant that animals—horses, pot-belly pigs, even llamas—were a part of every day, for Nicky they were just novelties, and while he was a natural athlete, childhood sports leagues were little more than a lark. Racing—for the whole family, but especially for Nicky—was everything. Apart from an annual spring-break jaunt to Panama City, Florida, family trips were to racetracks, first around the Midwest, then the Eastern U.S., and eventually the entire country.

That said, there was never any doubt about where home was. Even after he began traveling the globe to race in exotic locales, Nicky would always return to his beloved “OWB.” He received his education through local Catholic schools—Precious Blood Elementary School, Owensboro Catholic Middle School and Owensboro Catholic High School—and his first jobs comprised helping out at his uncles’ nearby farms, where he began developing the tenacious work ethic for which he would be known throughout his racing career. He remained close with his core group of childhood friends throughout his life, and he helped many young local racers to pursue their own dreams.

For Nicky, a distinguished amateur dirt track and road racing career transitioned into a successful stint in the AMA Grand National Championship and AMA Superbike series, in which he earned the 1999 AMA Supersport and 2002 AMA Superbike crowns with American Honda. He was promoted to the FIM MotoGP series with Repsol Honda, for whom he achieved his dream of earning the World Championship in 2006. Nicky also rode for Ducati and Aspar Racing in MotoGP, and last year he transitioned to the FIM Superbike World Championship with the Ten Kate squad. Along the way, his charisma earned him legions of fans the world over, while his dedication and professionalism earned the respect and admiration of his teams, teammates and competitors.

Among those who knew him best, Nicky was cherished for his generosity, kindness, and mischievous sense of humor. His famous grin was never far from his lips, and he invariably had time to engage with others, even strangers. The life of any party, Nicky loved to dance, wear funny costumes, and pull pranks, often with a microphone in hand. 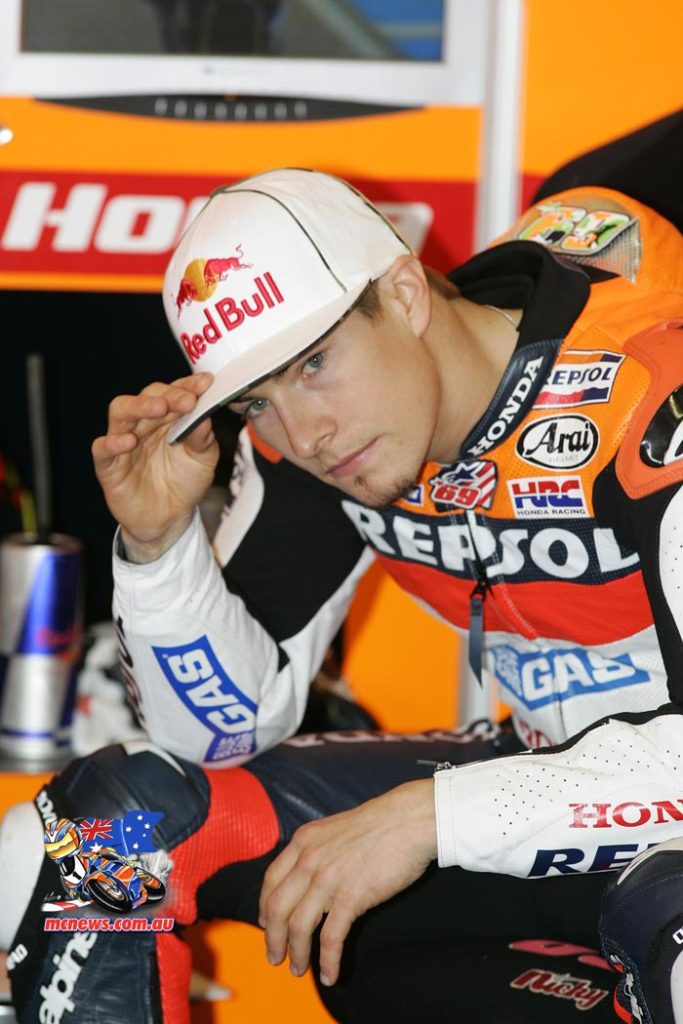 Throughout it all, family was Nicky’s anchor. Many Americans who race internationally opt to relocate overseas, but Nicky always preferred to return home between events. Well into his professional career, he resided in an apartment above his parents’ garage, and even after purchasing his own home nearby, he religiously showed up for his mother’s 6 o’clock dinners when he wasn’t traveling. Several years ago, he purchased and refurbished an old building on an Owensboro lake, and what he dubbed Victory Lane Lodge became the family’s preferred location for functions of all types, from Sunday get-togethers to weddings. He loved children and was a model uncle, and friends and family say he was never happier than after meeting girlfriend Jackie, with whom he became engaged last year.

Visitation will be from 2 to 8 p.m. CT Sunday at Haley-McGinnis Funeral Home in Owensboro. Funeral services will be at noon Monday at St. Stephen Cathedral Church, and will be streamed live on Nicky’s Facebook fan page. Donations may be made to the Nicky Hayden Memorial Fund, which helps local children in the community Nicky loved so much.