by Trev
in Motorcycle News, Motorcycle Racing, Real Road / TT
A A
Share on FacebookShare on TwitterShare

Glenn Irwin put in a scintillating ride at the International North West 200 on Saturday to claim the feature Superbike race on the Be Wiser Ducati, gaining his maiden International road race win in the process.

Riding the factory-backed Ducati Panigale R, the 27 year old grabbed the lead off the line and was involved in a terrific five-rider battle for the lead although it was the Carrickfergus rider that led for much of the seven laps. 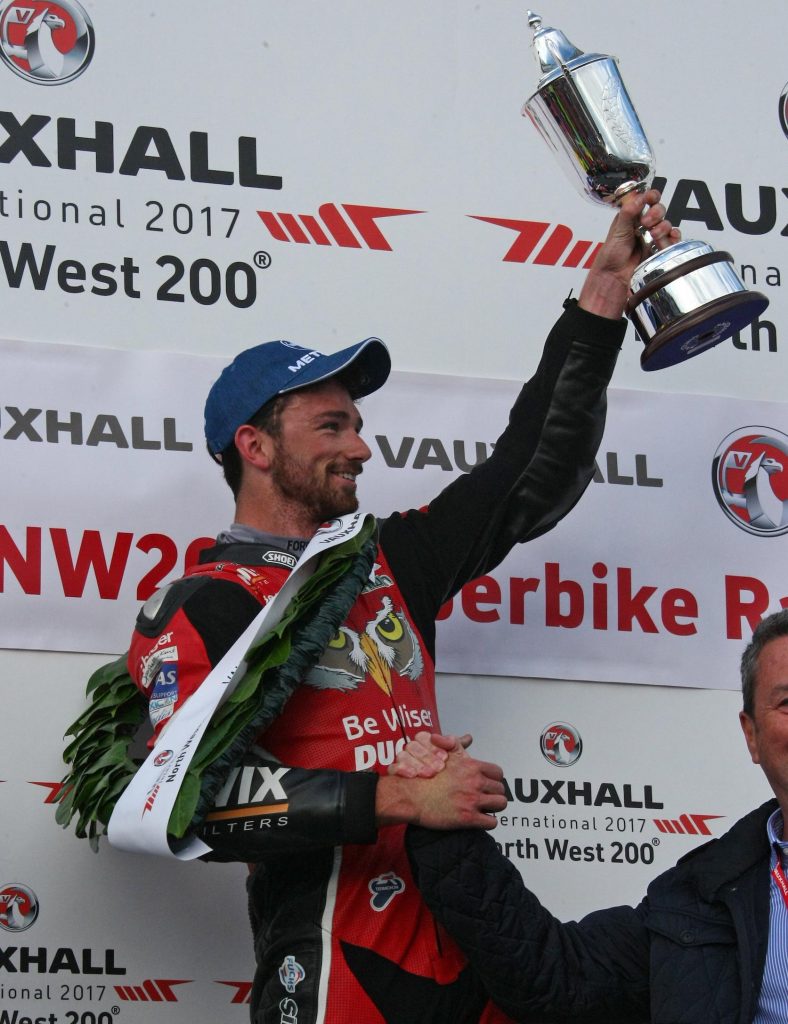 The Tyco BMW pairing of Alastair Seeley and Ian Hutchinson challenged him the hardest but although they nosed ahead on a couple of occasions, Glenn remained composed and put in a faultless ride to give the Penrith-based team yet another International victory.

Irwin’s only previous other visit to the 8.9-mile circuit came in 2015 in the Supersport class so he was making his first appearance in the Superbike races but the week started well during Tuesday’s opening qualifying session when he placed fifth with a lap of 119.587mph.

However, with glorious conditions on the Causeway Coast once more on Thursday, he laid down a firm marker for Saturday’s two races with a lap of 121.556mph in the final session, which placed him third and on the front row of the grid.

Unfortunately, the weather changed considerably for Saturday’s feature race with rain and then an oil spill combining to cause a lengthy delay. The opening Superbike race was cut to four laps and eventually got underway at 3pm, with tyre choice a quandary for all riders. Glenn soon moved up to third place on the first lap but just as he’d overtaken Ian Hutchinson for second, he ran on at the Mather’s Cross chicane and dropped back to fourth.

A lap later this had become fifth as he was overtaken by fellow BSB rider Peter Hickman and although this looked like it would be his final position, he reeled Hickman in on the final lap to take fourth place at the chequered flag.

“I lost a race along the coast road back in 2015 due to poor positioning so I was determined it wasn’t going to happen again. It’s my favourite part of the circuit but the front was Glenn Irwin moving around a lot through Black Hill and anyone who says road racing is 90% is talking nonsense, that was flat out all the way! I really wanted that one and I’m absolutely delighted so a big thanks to all the team and the organisers who did a brilliant job and put on a great meeting.” 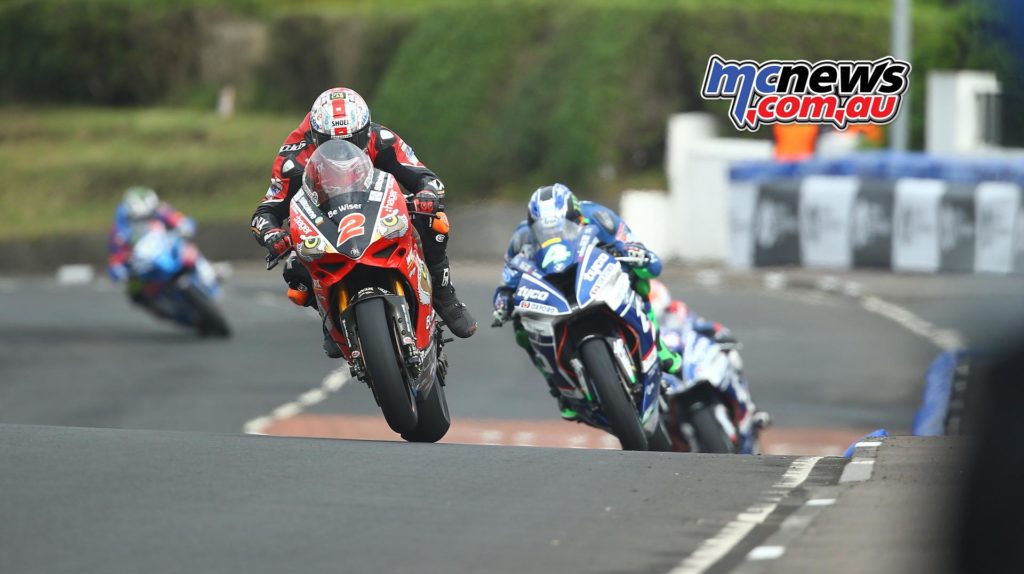 “It was a fantastic way to end the weekend and we were all relieved it was a dry race. It was a superb race between Glenn, Alastair and Ian and it’s just great for all concerned that we came away with the win. I think Glenn had decided he was going to win no matter what but he led for the majority of the race but didn’t make any mistakes and thoroughly deserved his win. He used his head in the earlier wet race and being cautious was the sensible thing to do so it’s been a very successful trip to Northern Ireland.”

Michael Rutter was part of the freight train at the head of the field, while the Northern Ireland pairing of Glenn Irwin and Seeley ultimately fought out the win, Rutter wrapped up yet another incredibly successful trip to the meeting with a strong fourth place.

“It’s been a brilliant day and although the conditions were pretty treacherous at times, I’m over the moon to have taken my 14th NW200 win on Ryan’s bike and added more podiums on the Bathams/SMT Racing machines. With the rain coming and going, it was pretty frightening at times but the Supertwin race saw pretty dry weather and I was able to use my head. I didn’t quite have the speed of Martin or Dan’s bikes so I slowed the pace on the final lap and made sure they came by me in the right places so I could retake them where I wanted and then control the race.

“It certainly wasn’t easy to do but the plan worked perfectly and you always appreciate things when you’re on the top step of the podium. I was in the mix all day on the Bathams/SMT Racing BMW’s and we have to be pleased with our results given we were up against factory machines from BMW, Ducati and Suzuki. I was trying hard into the corners and on the brakes and with second, third and fourth on the big bikes, we’re in good shape going into the TT so thanks to the whole team for a great job all week.”

Peter Hickman was sixth at the end of the opening lap and was looking comfortable in that sixth place until the final two laps when he began to run out of fuel and, try as he might, he was unable to hold on to the position eventually crossing the line in eighth place. Nevertheless, it meant he ended the NW200 week with four top ten finishes.

“It’s been a bit of a tough meeting to be fair but although the results haven’t been quite what either myself or the team wanted we haven’t been a million miles away. I hadn’t sat on anyPeter Hickman of the bikes before I got here and we encountered a few teething issues primarily with the electronics on the big bike and I couldn’t get the feel I was looking for with the throttle connection. The set-up is very different to my BSB bike and whilst top end speed and braking was good, I was losing time coming out of the corners.

“I was there or thereabouts on the big bike but just didn’t quite have the feel to allow me to go with the leading group but we’ve learnt a lot and know where we need to improve and with a test planned at Mallory Park next week, I’m confident we’ll be in good shape by the time we get to the TT.”