Around 20 Australian Superbike and Supersport riders took part in day one of a two-day test organised by Team Honda’s Paul Free at Phillip Island today, February 13, 2014.

It was the first hit-out for Jamie Stauffer and Josh Hook on the new Honda CBR1000RR SP model. Today served  as a shakedown test for both the new bike and riders, with neither Jamie or Josh turning the throttle on a Superbike since last year’s MotoGP.

Josh Hook – “We came in to this test oblivious to what the bike was going to be like, being the new SP model of the CBR1000RR, but I hopped on the bike this morning and went fast straight away, compared to what we thought we were going to go anyway. I feel comfortable on the bike already and the bike is working really well, Team Honda Racing is working hard.

“Today we ended up going pretty fast, 33.0 so nearly matching the 32.8 we did at the GP. We have looked at the data and we are faster in some sections and slower in others, so we have a bit of work to do but it is all looking really good and we are off to a really good start on the new SP version of the CBR1000RR Fireblade.

“We will have another go at it tomorrow and hope to make some leaps forward.”

MCNews.com.au – How did you adapt to the Pirelli rubber today?

“It was good, those tyres are working really well around here and I was really consistent too.”

Jamie Stauffer – “We did a lot of laps today, on one front tyre I did 52 laps, overall, for the day, I must have done around 100 laps.

“We’ve got a lot of different things on the bike, on the new SP today, different suspension, different tyres… So we’ve been going out there and getting a feel for the bike and seeing what changes do what. It’s been quite good, it’s good to get out there and do a lot of laps…. They weren’t very fast laps (33.6) but we weren’t really trying for that at this stage anyway, just getting our heads around how the bike adapts to changes in set-up.

“We’ll see how we go tomorrow, we’ve got a few things to try and everything feels pretty good.”

Today was also a chance for Wayne Maxwell to throw his leg over a Fireblade for the first time in nearly 18 months. After clinching the ASBK Title last year with Suzuki, only for the PTR managed squad to pull out of season 2014 after uncertainty surrounding the series saw sponsors pull out, Maxwell quickly got down to business on one of last year’s Team Honda Fireblades. Maxwell will ride the previous model at the Superbike World Championship round next weekend as Team Honda has not had sufficient time to prepare him an SP model. Wayne will however front up for the ASC-FX on an SP machine on an equal footing with his teammates.

Wayne Maxwell – “It is good to be back here riding for Honda, hopefully we can some win more races for them.

“Honda didn’t have enough time to put together another SP, so for now we are running on the previous model, I am really appreciative for Honda going to the effort to put a third rider on to help make sure I can be on track and running the #1 plate.”

MCNews.com.au – What times did you get down to today?

“Low 33s today, so nothing special, first day on Pirelli and first day back on a Honda. I have never ridden on this suspension on the Honda, and my mechanic has never worked on a Honda, it is very different and we are just going slowly-slowly working out way around it.”

The other Team Honda supported rider, Troy Herfoss, also a late addition to the team, was testing today at Wakefield Park but has to wait for a fully race-prepared machine prior to the start of the domestic season. Glenn Scott was also testing at Wakefield Park today.

Glenn Allerton also rode the NextGen Motorsports BMW but was hampered a little by both a troublesome knee injured late last year, and a flock of huge geese that hung around the circuit all day and nearly caused numerous incidents for many riders. The two-time Australian Superbike Champion circulated in the mid 33s.

“I am having a few problems with my knee, it’s nothing I shouldn’t be able to get around when the red mist comes down and we go racing. I had a big crash here when we were testing at the end of last year and I thought it would be okay by now, but I still have some niggling problems there when my knee is fully bent.

“Overall though I am pretty happy with how we went today. We did some consistent lap times, and I know that when we race obviously we are going to go a little bit faster. As far as testing goes this is probably one of the best tests we have had in terms of the times we have been able to produce.

“There was a bit of an issue today with the geese, I think it is a pretty general consensus that there is just too many of them, I have never seen that many down there before and they have to do something about them because they are dangerous. I had at least six close calls today, and not with plovers, but big, big geese.

“It is good to be back on the bike and back on track again and I can’t wait for next weekend.”

Ben Henry made the trip down from Queensland with his new Cube Racing ZX-10R Kawasaki but his suspension parts are yet to show up thus the 32-year-old was left to work through various issues with a mix of Suzuki fork internals utilised and after a slow start to the day ended up happy with his progress.

Ben Henry – “I only managed 36.0 today, on old tyres but was very consistent. I had some technical problems this morning but managed to put some laps together in the afternoon. The bike is a dream to ride, I hit more apexes per lap that I do on my old race bike already. I am very much looking forward to tomorrow as I should have a new front fork to try, I can’t wait.”

A number of Supersport riders were also on track today including Ryan Taylor who made this comment via social media. “Great first day of testing here at Phillip Island for the lead up for next weekends opening round of the World Supersport. This is the first time I have ridden this Yamaha R6 which I’ll race next weekend. It’s also the first time I have used the logic data logging system. Today we have focused on suspension set and after 40 odd laps were pretty happy! Been a great day, roll on tomorrow! Big thanks to Stewart Winton, Peter Taylor, Ali, Sam and Wayne Howie from data logging system. Also a big thanks to Shoei and Sidi as well who have come on board.”

Aiden Wagner, yet another rider to choose Yamaha machinery for Supersport, was equally as enthused. “They day started out good but we weren’t sure how the weather was gonna turn out so I tried to do as much riding as I could before the rain. But the weather held off with only a few little sprinkles throughout a couple of the sessions. Other than that, today has been awesome, smashing personal best times so far as Callum Spriggs pushed each other hard all day, as we traded paint,haha.

“I am really looking forward to tomorrow’s test and also cant wait for the World Superbike event Aussie Supersport support races, we are down here on a mission!”

The private two-day test session concludes on Friday. Weather permitting, many of the riders will step things up to another level tomorrow. 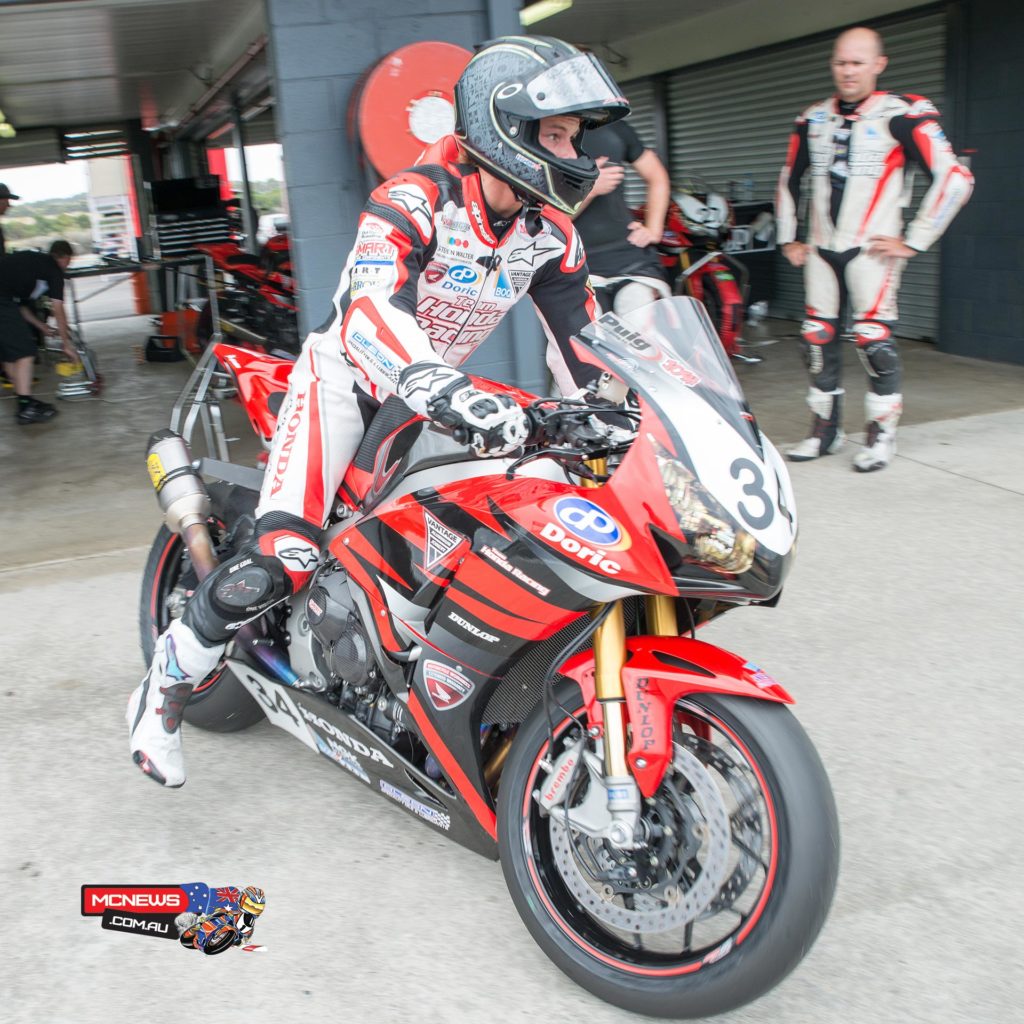 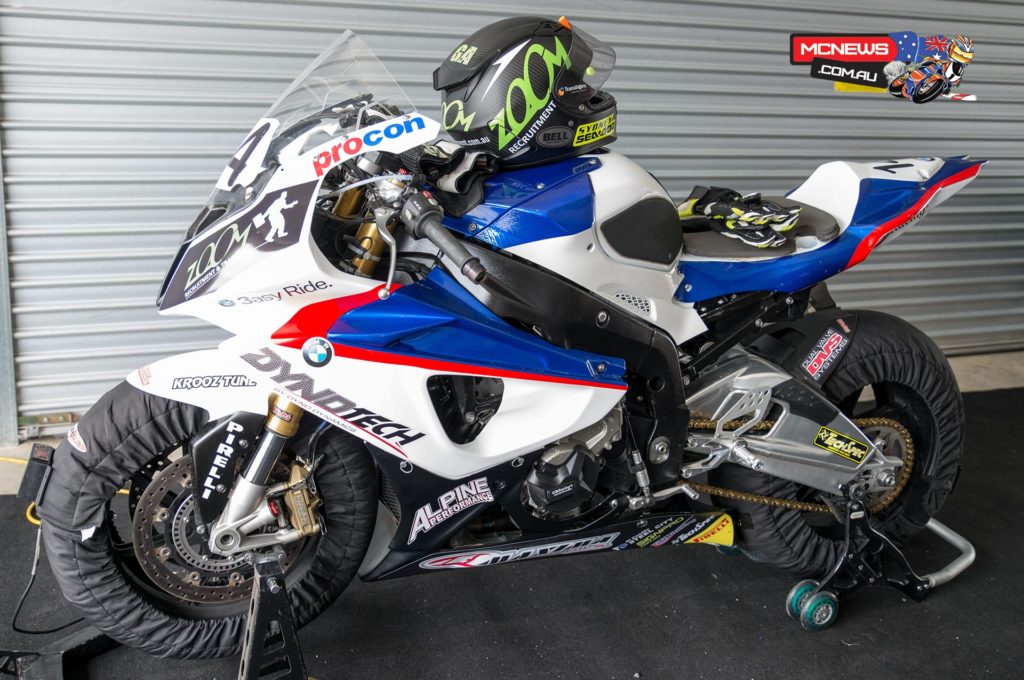 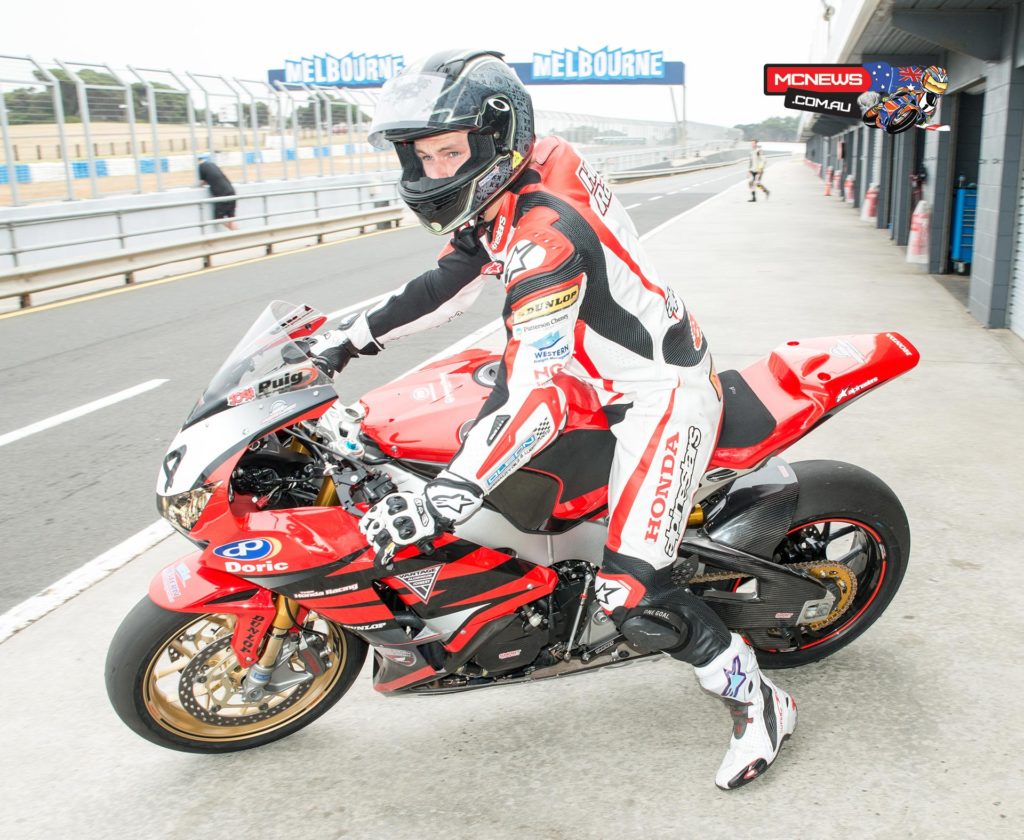