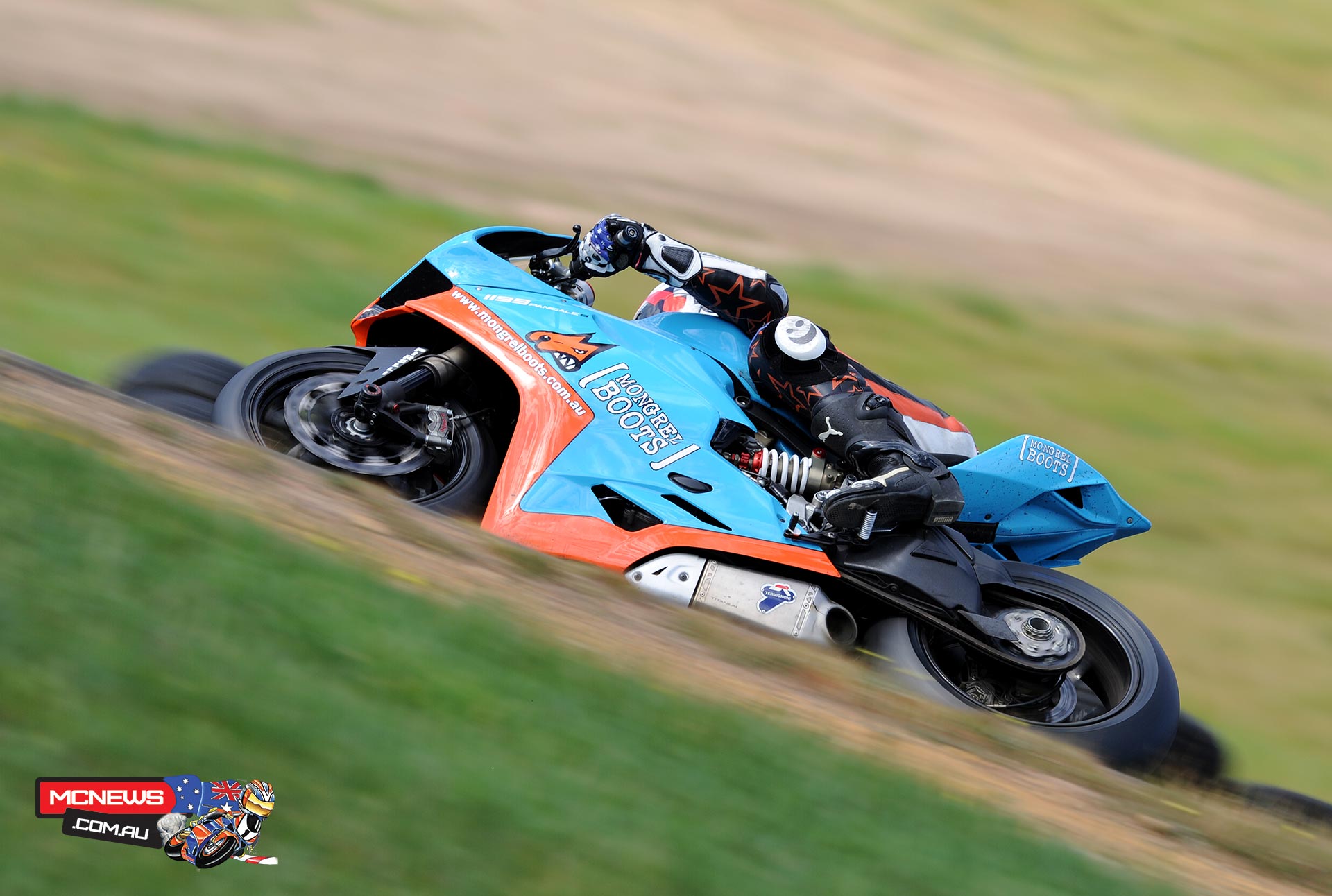 Twenty-eight year old Tyson Jones has come up trumps in claiming the last round of this year’s Pirelli Road Racing Series in the Sprint format series at Broadford on Saturday.

Jones guided his 3JJJ Racing Kawasaki ZX-10R to three faultless victories which also handed him the PRRS Sprint series championship in the process. “It’s been a really good day today,” said Jones who was using the new FD01 (Farrkin Deluxe) Race Center technology in Matris cartridge. “I didn’t expect to come here this weekend and take out the Sprint series championship, as I was twenty-nine points behind Paul [Simonson] coming into day. But yeah, it’s awesome to walk away as the champion for 2014 that’s for sure!”

Second to Jones was his elder brother, Nathan who played second fiddle all day. The closest Nathan got to his ‘bro’ was in the final race when the finishing margin was just .052sec.  The only slip up for the two brothers was in race two when Tyson was leading into Crash Corner (turn three) and came in a bit too sideways and ran wide, with Nathan going out in sympathy, following suit. “To tell you the truth I’m not real sure what happened there,” Nathan said after race two. “I saw Tyson went a bit sideways in and maybe I just got caught watching him.”

The following lap, Nathan again went on at turn three, but this time it was because he out braked himself. “I was just pushing too hard really,” explained Nathan. “It was probably the first lap that I had, that I wasn’t right behind Tyson, so I thought I would have a crack and push on, but I just went a bit too deep.” It wasn’t too bad for Nathan though as he did manage a 56.918 PB in the second race on lap three of the seven lap journey.

Making it a Kawasaki ZX-10R podium lockout was thirty-four year old Dean Archbold aboard the Morwell Kawasaki machine. While third place was good enough, it was the case of ‘what could have been.’ Archbold experienced clutch issues in race one and fork seals problem in race two. “We managed to get through the day thanks to help from Mal Metcher,” said Archbold. “It was a very good day overall, but it could have been better.” Archbold came into the round nine points off the championship lead and ended up seven points off Jones in the end. So overall, was Archbold happy? “To come second overall after the day we have had is not too bad.”

The one only Suzuki mounted rider in Travis Baas (Ords Motorcycles) was fourth overall after posting a 6-5-7 result with Peter Berry (Kawasaki ZX10R) rounding out the top five, just two points behind Bass.

For eighth place man Simonson, who led the title charge coming into the round, it was an up-and-down day. Race one was the turning point for the championship story when he lost the front end between turn one and two. Then in race two, Simonson went out and had a massive 42psi in his rear tyre, but still managed to finish third, 8.956sec behind Tyson Jones. Overall Simonson finished in third place in the championship fight and was just three points off Archbold. “It’s a bit frustrating, but I only have myself to blame,” said Simonson. “It’s one of those things. I’m disappointed, but what can you do.”

In the Supersport class, both Ben Meade (Race Center) and David Barker were locked on sixty points together with Meade winning on a count back after he nailed a 2-2-2 result to Barker’s 1-4-3 result.

Meade regarded his day as a “ripper” of a day after having a few setup dramas on Friday. “It was pretty good hard close racing out there today,” said Meade. “We’re lucky to come through with the ‘bikkies’ today.”

For Barker, he was mainly only riding for the day to wrap up the C-grade championship that he did with ease. Overall Barker finished third in the championship that he was quite surprised with even himself. “After mucking around with my electronics this year and suffering a few crashes throughout the year has made the year a bit of a struggle,” said Barker. “I’m really surprised that I have managed to finish within the top three, so yeah I’m pretty happy.”

Fourth went to Ben Gotch which was good enough for him to seal the deal in the championship. Kieran Maher (Rhino the Wrecker/Rhino Bins) rounded out the top five.

The pairing of Peter Berry and Paul Simonson have taken out this year’s Over 500cc Hughie Hoare Endurance race yesterday at Broadford.

Berry who held the reign’s on his ZX-10R and Simonson on his Aprilia RSV4 completed the race in a total time of 46min03.534, 6.794sec clear of the Jones brothers, Nathan and Tyson.

It was a testing day for Nathan after he slipped off his #84 3JJJ ZX10R machine while in the lead. Nathan came off after trying to avoid a crashed rider that went down in the early stages of the race, which meant it was all down to bother Tyson to push his way through the field and up to second.

Picking up the final spot on the podium was the pairing of Dean Archbold and the evergreen, Steve Tozer, who finished 19.152sec behind the race winners.

Fourth place went to Darren ‘Super Daz’ Sciberras on the RC10 Superbike who paired up with Ben ‘Dingo’ Meade, who was also the first 600 rider across the line. Meade did have to do most of the race as Sciberras forgot to have his cup of concrete before the race!

Rounding out the top five was the pairing of Tim Reinen and Hayden Graham who completed the race in 47min09.368.

One lap behind the top five in sixth position, was Stephen Mion (Bulleen Health and Fitness) and Scott McGregor. “Thanks to the gun start of Scott [McGregor], it gave me an awesome second leg to hold onto. However, I’m not sure how keen I am to do twenty-five laps around Broadford again in one hit at race pace.” said Mion.

Snaring the Formula 2 & Up to 500cc Hughie Hoare Endurance win was young gun Ted Collins and Alessandro Malatesta. Not only did the pair win by 25.018sec, but they also posted the fastest lap time by posting a 1min03.519 on lap twenty-six.

Take your hat off to Matty Barton (NZi/Morris Oils/ETS RaceFuels/GP FastLine) who wrapped up second place all on his own aboard a Honda NSF 250 Moto3 machine. Barton finished 14.953sec clear of Tozer and Paul Cassingham.

Taking out the Junior Hughie Hoare Endurance was Jacob Whitehouse, with Joel Kelso and Scott Nicholson joining him on the podium.

In conjunction with the final round of the Pirelli Road Racing Series saw the second last round of the Oz BEARS. Winning the F1 class with a 100 percent strike rate was Phil Czaj on his 4SR Australia/CRC Aprilia RSV4.

Phillip Cloros (Mongrel Boots) was second on his Ducati 1199 Panigale who scored a 2-3-2-3 result. Rick Fitzsimmons was third, also on a Ducati 1199.

Just like Czaj, Anthony Villella wrapped up the F2 class with a clean sweep on his FIIVE/Mobil 1/Triumph Daytona 675. What makes it even more impressive is tha fact it was the first ever time that Villella had raced at the Broadford complex.  Villella finished ahead of Philip Bartush and Craig Leech.

Other BEARS class winners were David James in the F4 class, Richard Spottswood in the F5 and Scott Rinaldis in the F3.

The final round of the Oz BEARS will take place on November 8-9 at Sydney Motorsport Park.