Indulge me for a minute as we attempt to get into a collective fantasy here! You pick up a scratch and match ticket from the local newsagent and manage to hit the jackpot. Fifty thousand big ones, and all you’ve got to do is figure out where to spend it. That part is obvious: A track bike.

Something properly sorted and prepped solely for track days: Hmm, maybe a Gixxer thou sleeper. Stock looking bodywork and a 190hp PTR motor? That would be fun, hair raising tales of 100mph handlebar shaking power-wheelies and laying darkies in the turns would look great on the bar stool resume, but in the real world it would be a beast to ride on a regular basis.

Maybe a highly tweaked 600cc supersport would be more like it, or a Ducati 999R? I guess the choices could be endless, and in the end it would come down to personal riding preference.

Well, when my fantasy comes true I will be picking up the phone and talking to John Murray at Racemetal to order myself a Poggipolini NCR Millona.

Weighing in at 118kg, yep that’s not a typo, including fluids, and putting down a useful 85hp to the blacktop through a 195/65 KR108 Dunlop slick, while scything through turns thanks to GP derived suspension components is about as close to nirvana as it gets.

The Ducati 1000DS motor that Trev waxed lyrical over in his review of the Supersport 1000 DS motivates the Millona, and with only 118kg to propel it pulls out of turns quite strongly indeed.

The bike was just so easy to ride that within a couple of laps I kept finding bikes in my way.  For me the racetrack was suddenly a very different place, I was going faster than I have ever gone on any bike in my life.

Where Pahrump’s (Las Vegas) two blind right-hand corners were a cause for concern on the top of the range Ducati 999R, necessitating running out wide before entering, they now became passing places of choice as I stuffed the diminutive Poggipolini up the inside of anything that got in my way. Time and time again, blitzing through the chicane on the backside of the track I would nearly run up the back of people. It was just so easy to keep the throttle pinned, the suspension making a joke of the bumps that regularly tie the latest road going sportsbikes into knots. 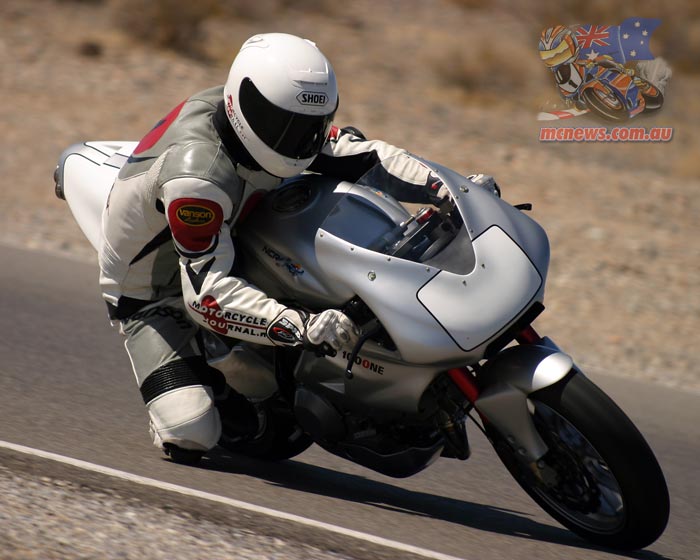 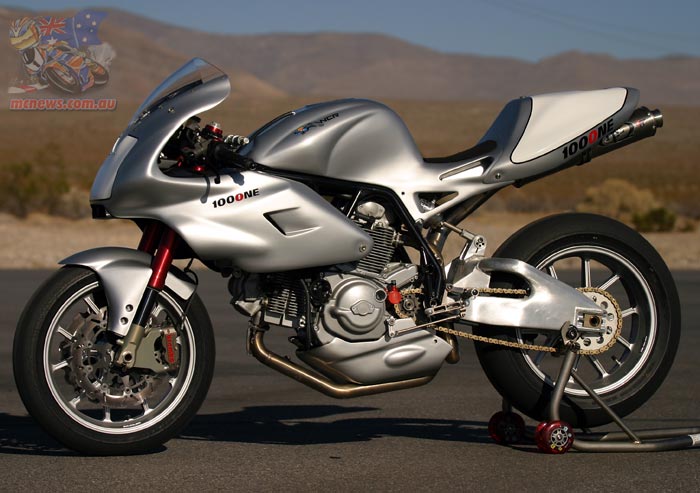 Then there were those brakes. Massive Brembo radial four-piston GP spec’ calipers locking down on 320 mm wave rotors meant squeezing the lever had the same subtle effect as a wet fart in a crowded phone booth.

With just the lightest touch they about parked the bike from whatever speed I was traveling. I know more manic late braking would have easily been possible, but still suffering from sticker shock; I was able to keep myself honest.

The concept of the bike is quite unique. Produced by the Poggipolini family in Italy, it was born from a fusion of passion and high technology, resulting in the ultimate track day motorcycle.

From the race stand, slave starter system, and fact there is no provision for road going accessories on the bike, the mission is clearly stated.

As tested, the bike comes with a standard Ducati engine and, except for the incredibly sexy titanium under tail exhaust and ignition map, it receives no other tuning.

The Poggipolini family does offer a tuned version of the engine that puts out an additional 20 rear wheel horsepower, and if I was buying the bike I think I would take this option.

Making just 85 horsepower at the rear wheel, the bike loses out somewhat down the straights, and while this makes for some great cat and mouse games hounding bigger bikes through the infield, it would be nice to have the power to hold them off down the straights.

The other side of this coin is the bike makes you a better rider, as you can’t rely on horsepower. You have to carry more corner speed and work harder on the drive onto the straights. But, as with all things, “you pays yer money you takes yer choice.”

Parked up in the pits, the bike certainly attracted a lot of attention, and a bunch of guys commented how fast the thing got out of the corners. It was just so easy to use all the power and, between the slicks and the chassis set up, I never felt like I was going to lose the back end.

In the corners, it was just amazing how many lines I could take. It was possible to come up behind someone and decide whether to go round them on the inside or the outside, the Millona is just so agile. Changing directions is merely a thought, the bike isn’t nervous in anyway flicking from side to side and the amount of grip afforded by the Dunlop front slick is simply outrageous.

Sitting between sessions, gave me a chance to chat with US importer John Murray, and I learned the frame is a Poggipolini design, made from lightweight Chrome-Moly. The tank, seat, fairing and belly pan are all carbon-fibre.  Every nut and bolt, fastener, connector or cover is made from Titanium. Also, parts like the gas cap, footpegs, brackets and hangers are all made from the precious super light metal. This is the major part of the Poggipolini business as suppliers to F1, World Superbike and Moto GP teams.

The titanium exhaust is made by the Italian company HPE, and sounds absolutely awesome. Another comment I heard from other riders was they could definitely all hear the bike coming.

As mentioned earlier, the front fork is a race derived Marzocchi and the rear shock an interesting looking unit from a company called Double System. It is used for its remarkably light weight, but you can specify an Ohlins if you want.  The bikes can be custom tailored to each individual owner. I have no complaint with the system and didn’t make a change to the set up. I just couldn’t ride the bike hard enough to find any handling deficiencies so left both ends well alone. The wheels are simply works of art: Marchesini magnesium 10-spoke forged rims which also help to keep the weight down.

Walking around the bike, the brushed alloy swing arm, the intricate STM Italy hydraulic clutch reservoir, the digital instrument panel, and the multi adjustable levers will have you drooling down your leathers. The bike doesn’t have a high bling factor, as it is all about function and in some ways is a little understated. This is deliberate, as intended owners are not out to win races or prize money with this bike; they are just after the ultimate track day experience. A bike that makes going fast so incredibly easy and with such style. 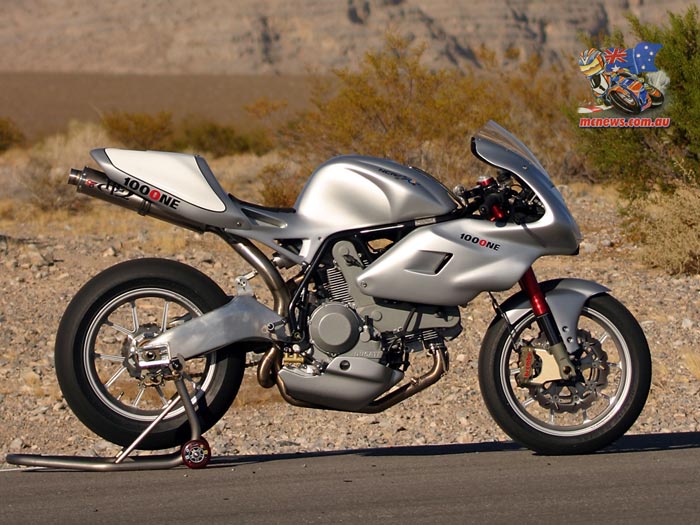 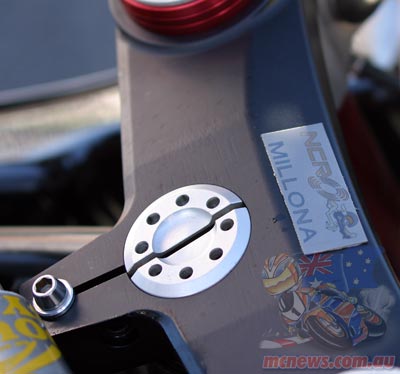 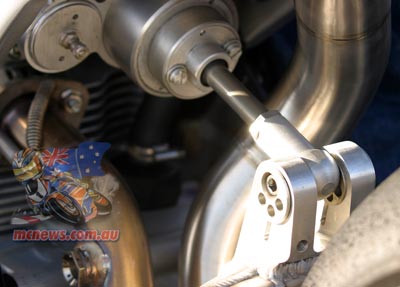