Pro Motocross set for this weekend at Wonthaggi

Pro Motocross set for this weekend at Wonthaggi

The biggest stars of professional motocross will compete for more than $20,000 in cash and prizes at the AMX MX Open in Wonthaggi this weekend, wrapping up the year.

The factory teams will be out in full force too, with fierce rivalry between Yamaha and Honda as riders duke it out one last time in 2021.

Factory Honda team owner Yarrive Konsky has a point to prove. Factory Honda will enter three 450 riders, Dean Ferris, Kyle Webster, and Brett Metcalfe. The three riders are all proven champions. Metcalfe has competed all over the world and has beaten the best, Ferris has proven to be best in the world on a given day and Webster has just won his first championship.

“The Motocross Championship was cut short due to the pandemic, and I don’t feel we got the opportunity to show what we were capable of in the 450 class,” said Konsky.

Webster now resides in Inverloch; the former Western Australian likes the Bass Coast and believes he has an advantage over his competition.

“I have ridden the track a lot and tested their more often than the other riders. I also get to go home to my own bed. I am in comfortable surroundings. I like Inverloch, its peaceful, the people are friendly and there are very few distractions,” said Webster.

The event has attracted riders from all over Australia. Factory Yamaha’s Luke Clout and Aaron Tanti are travelling down from New South Wales. Tanti is excited to be racing again, especially with his new team.

“With everything we have experienced this year I am excited to be back at the track racing. This will be my first race with Factory Yamaha, and I can’t wait. I am better prepared going into this race than I was at the start of the year. I feel strong and ready,” said Tanti.

The professional women are also set to compete for equal prize money in their own race. Women from all over Australia are eager to prove themselves as they missed out on their Australian Championship.

Maddy Brown who has competed all over the world is happy to be back racing in her home state and has a point to prove.

“The past two years have been terrible; we have missed out on competing in two championships. We need this and I can’t wait for the gate to drop on racing this weekend,” said Brown.

With riders coming from QLD, NSW and SA the event is set to finish a trying season on a high and three-time Australian Champion Dean Ferris wants to take a win going into next year.

“We are all going to give it everything we have; this is our chance to finish the year on a high. I have brought my family with me, and we are also looking forward to spending a few days on the Island after the race,” said Ferris.

The event promises to bring all the action of great racing as well as off-track displays and trade sales. It’s a great event to come and visit and find something for Christmas.

Teams will have merchandise on sale, their will be posters and some of the spectators will have the opportunity to take a tour through some of the factory transporters. Tickets are available on-line. For more information go to www.mxopen.com.au. Tickets are $25 for adults and $15 for children. 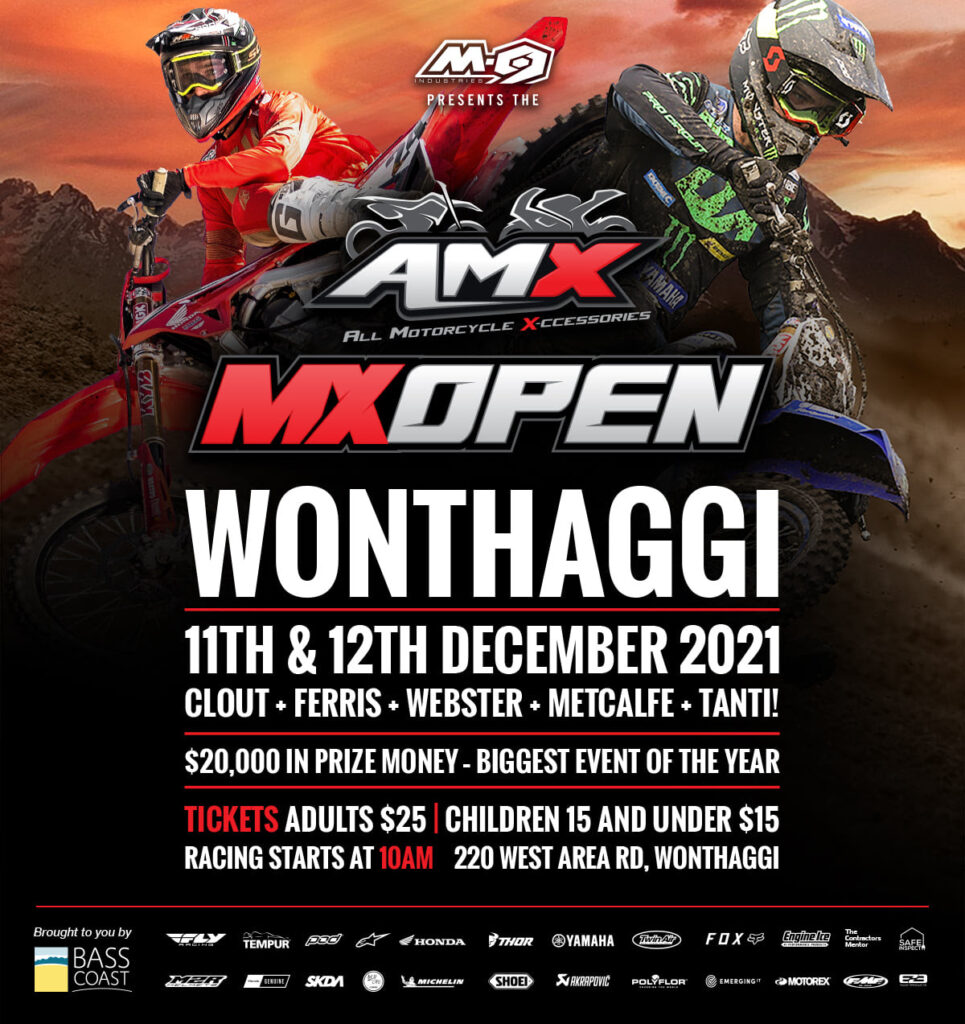