ProMX hits Coffs this weekend with some extra attractions

This weekend (23-24 July), the Penrite ProMX Championship presented by AMX Superstores heads to the northern NSW coastal city of Coffs Harbour. With only three rounds remaining this is starting to get towards the business end of the season…

The Coffs Harbour event is billed as the “Retro” round, as besides the three premier ProMX categories of Thor MX1, Pirelli MX2 and Maxxis MX3, there will be the added attraction of three races for the elder statemen of Australian motocross competing in two classes. There will be the “Classic Evo Cup” for air-cooled machines manufactured before 1981 with drum brakes, and the “Pre-95 Cup” class for any machines that were produced before 1 January 1995.

To get into the Retro spirit of the weekend, all teams and riders in the ProMX classes have been encouraged to dress up their bikes and riders with special one-off throwback sticker kits, number plates, and riding gear to get into the “Retro” spirit. Early indications are that many of the teams have responded and will have their modern bikes disguised in livery from days gone by.

Additionally, after the riders’ briefing, on Saturday afternoon, there will be a gathering of past champions with Jeff Leisk, Stephen Gall, Glen Bell, Craig Dack and ProMX TV commentator, Lee Hogan taking part in an autograph session.  There will also be a Q&A session where fans are encouraged to ask the legends questions about their respective careers and experiences in the sport that garnered dozens of Australian Motocross Championships, as well as plenty of overseas success between the assembled legends. There will even be a free sausage sizzle!

During the lunchbreak on Sunday there will be another signing session as well as a selection of classic race bikes on display over the weekend.

As for the main game of the three championships categories, the Thor MX1 category has produced stellar racing in all the previous rounds and the intensity is bound to continue at the Coffs track

Since the unfortunate exclusion of 2021 MX1 champion Luke Clout, and 2021 MX2 champion Kyle Webster from this year’s competition, their rivals have really lifted a notch with some of the closest racing seen in some years as the elder statemen of the sport realise that another Australian championship is up for the taking.

After a slow start to his title assault, Clout’s team-mate in the CDR squad Aaron Tanti has stepped up to the challenge. With a 2-1 finish at Gillman in May, and a double win at the last round at Maitland, in June, Tanti has momentum on his side with three wins on the trot and arrives at Coffs holding a 26-point lead over 2019 Champion, Todd Waters (Husqvarna) with the evergreen Brett Metcalfe (GO24 KTM) just two-points adrift in third.

Waters scored two fourth place finishes at Maitland and went within 0.8 second of claiming his fifth podium finish of the year, as his old sparring partner Dean Ferris claimed third, just a bike length in front of Waters.

Mirroring how intense the battles have been this year, Waters and Metcalfe tied on points at Maitland for equal third, but Waters claimed the trophy with his better finish in the second moto.

Ready to roost the above trio will be the rejuvenated three-times champions, Dean Ferris. After overcoming injuries and coming out of semi-retirement with a lifeline offered by HRC Honda Racing, he has been right in the battles at the front. At the third round at Wodonga he was in stellar form as he claimed a double victory to back up his win in the second moto at the previous round at Mackay. At Maitland he was again right in the mix with a seventh and a third in the final moto.

Sitting fifth in the chase, 33-year-old Kirk Gibbs will be another that should be back in the now customary freight train at the front. A wrist injury at Maitland forced his exit from the second moto but Gibbs will be back in action this weekend.

While he may be sitting in 12th position overall after a pair of DNFs at Mackay, as well as missing the Gillman round, the recent resurgence of two-time premier class champion Matt Moss cannot be discounted. A brace of second places at Maitland demonstrated he still has the pace and desire to compete at the top level. If the second moto had been one lap longer he may have well claimed his first win in many years as Tanti beat him to the line by less than a second.. 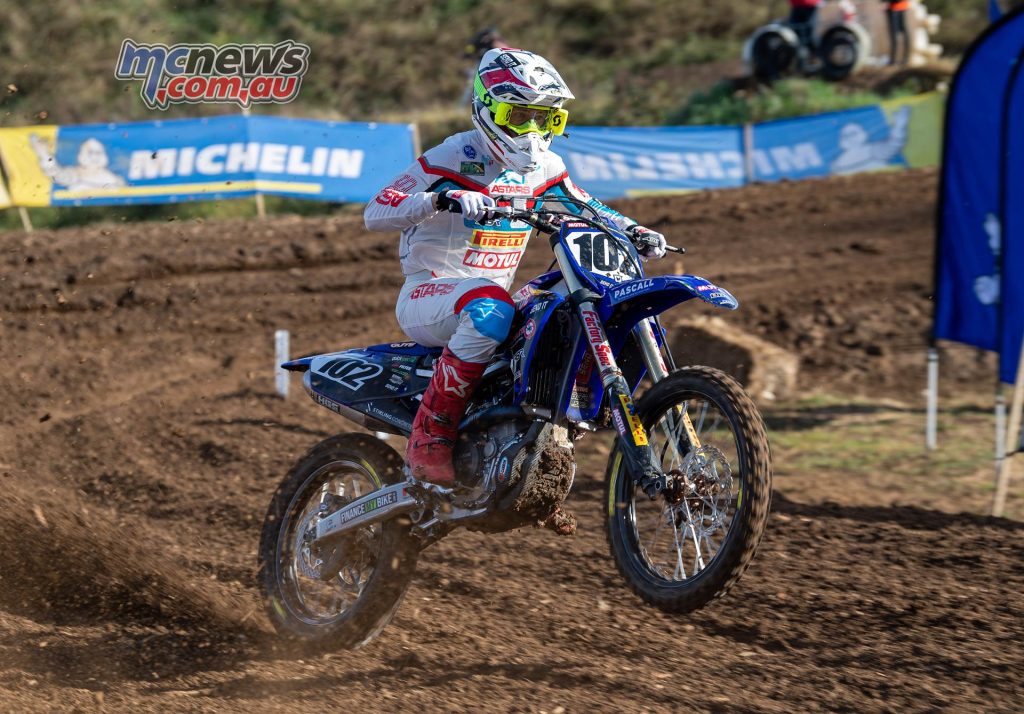 One of the reasons for the form return is down to Moss reaching out to a legend of Australian motocross and Supercross, Craig Anderson. Since ‘Ando’ has come on board to offer advice and rider coaching, Moss has kicked another gear as the approach, training and commitment has increased dramatically.

It may be near a decade since Moss won back-to-back titles on a Suzuki but don’t be surprised if Moss claims a victory or two in the remaining rounds.

Out of ten races this year, Todd has only been off the top step once, and that was a fourth place at Wodonga after a slight mistake dropped him from the lead.

Surely his performances this year are the catalyst for him to head overseas again to either the world stage or the AMA as the only reason he is in Australia is that he ‘aged-out’ of the MX2 world championship class.

While the championship for Todd is as much of a certainty as can be in racing, there’s plenty to play for behind him. Yamalube rider Rhys Budd holds an 11-point lead over Serco Yamaha’s Bailey Malkiewicz with his team-mate Jesse Dobson a point adrift in third.

Budd’s season consistency had a hiccup at Maitland where he had a tangle with another rider on the opening lap of moto one and dropped to last place, before making a charge back to seventh and topped it off with a sixth place in the second leg after a similar incident happened on the first lap.

A doubtful starter this weekend is Budd’s team-mate, Alex Larwood, who sits in sixth spot, one point adrift from Noah Ferguson (GasGas). Larwood had a fall in the second leg of the Gillman round and didn’t compete at the previous round at Maitland due to injury.

The Maxxis MX3 class has produced up and down moments for the top runners as early season leader Cambell Williams (HRC Honda) has had a difficult past two rounds after his dominance in the first six races that produced three wins and an added two podiums.

Since Gillman the wheels may have buckled because his best result has been a sixth in Moto One at Gillman, followed by two 10th place finishes and a DNF in the final leg at Maitland that has dropped him to third overall, 25 points behind the leader in 15-year-old, West Australian Kayden Minear (KTM Junior Team).

Where the wheels fell off for Williams at Gillman, and the struggle continued at Maitland, for Minear it’s been the exact opposite as he took two wins in Adelaide to take the championship lead. At Maitland he scored 3-5 finishes and now has a 23-point lead over the ever-consistent Jack Mather (Husqvarna). With the recent news of Minear making the team for the Junior World Motocross Championship, the sandgroper is sure to be out to impress.

At Maitland, Thynan Kean moved up the championship table with a second and a win to take out the round and now sits in fourth place, still a long odds bet for the title, 41-points behind Minear, but a top three finish is well within his grasp.

Connor Towill from Newcastle (NSW) has one of those “what might have been” seasons as he certainly has shown he has the pace to mix it at the front but a few unforced errors and two DNFs have slowed his charge. At his home round at Maitland last month he broke through for his first win in the class for the year, so the confidence gained last month should hold him in good stead to perform on the sandy track at Coffs.