Rabat’s teammate Mika Kallio was third in the race, though second place finisher Takaaki Nakagami (IDEMITSU Honda Team Asia) was later disqualified for the use of a non-regulation air filter.

Rabat aims to win the title this year after emerging as a Moto2™ race winner last season and he looked threatening throughout the Qatar weekend, ultimately beating Nakagami to the line by 0.04s after they had battled for the lead for several laps. Rabat ran wide on the first lap and dropped to fifth but had too much for his closest rivals over the 20 lap contest, coming back well to take win.

His colleague Kallio will also be looking for wins in 2014 having finished a second behind the front two, eventually being moved up to second due to Nakagami’s disqualification.

Simone Corsi (NGM Forward Racing) ran well from 10th on the grid beating debutant Sam Lowes (Speed Up) who also performed solidly in his first Grand Prix, their final results being classified as fifth and sixth

Gino Rea and Mashel Al Naimi had stopped mid-race with technical problems, whilst with 8 laps to go in Axel Pons and Marcel Schrotter crashed out.

Dominique Aegerter pulled off with 5 laps to go, smoke pouring from his exhaust, ending his 33 race run of consistent point scoring finishes. Nico Terol was also affected by mechanical problems at a similar stage of the race and he will look to bounce back next time out at the Circuit of the Americas where he won last year. 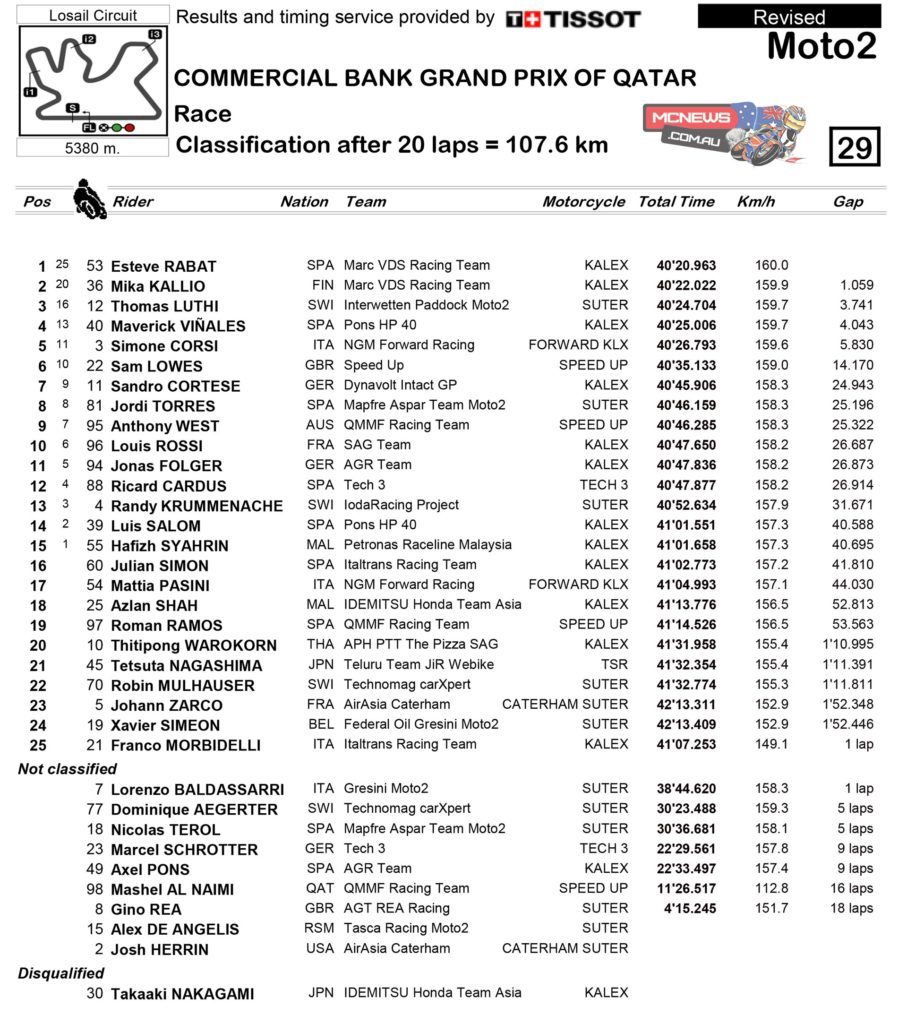 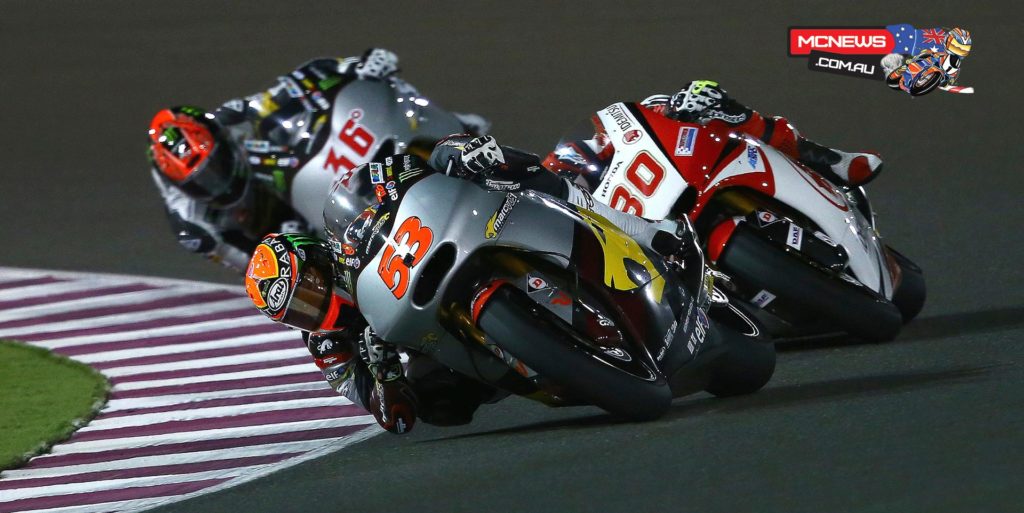 Tito Rabat and Mika Kallio got the Marc VDS Racing Team’s 2014 Moto2 World Championship campaign off to a flying start, with the 24-year-old Spaniard winning the opening race of the season in Qatar and his teammate joining him on the podium in third place.

Rabat made a good start from pole, but got pushed out wide in turn one and dropped back to fifth. The Marc VDS rider then battled his way back towards the front, eventually passing his teammate and then pushing past Takaaki Nakagami on lap 13 to take the lead, which he held to the chequered flag.

Kallio pushed hard on the final laps to try and pass Nakagami for second, but lacked the necessary grip from the right side of the rear tyre to make the challenge and was forced to settle for third at the line.

Livio Loi missed out on points in tonight’s Moto3 race, which he finished in 17th place after starting from 20th position on the grid. The 16-year-old Belgian was happy with this pace in the race, but disappointed to finish outside the points.

Tito Rabat // 1st – “I’m happy to have come here to Qatar and taken the first win of the season on my debut for the Marc VDS team. I got a good start, but then Taka Nakagami braked really late into turn one and I made a mistake and ran wide. It took me a good few laps to work my way back to the front, but I was pushed all the way by Taka and Mika. In the end I managed to defend the lead to take the win, but I need to think about the early laps and also how to manage better the end of the race. It was a great way to start the season and now we need to look ahead to the next race in Austin.”

Mika Kallio // 3rd – “I got a good start, making up places off the line and managed to slot into second behind Taka, who’d already pulled a gap at the front. It took me two laps to catch him, and I had the pace to pass, but I decided to sit in behind, stay as smooth as possible and save my tyres for the last few laps. The lap times were quick, but I felt comfortable, until Taka upped the pace again with about eight laps to go. Then Tito came past me and I started to struggle for grip in the right hand turns. I was making up ground in the left corners only to lose it again in the right corners. I lost contact with them on the final lap and decided to settle for third and the points. Although we could have won tonight, I’m happy to finish on the podium after such a big crash yesterday. Thanks to my crew, who put in long hours to rebuild the bike last night. Thanks also to Petronas Raceline Malaysia for the loan of a frame.”

Livio Loi // 17th – “We knew it was going to be hard tonight, starting from so far back on the grid, and that’s exactly how it turned out. I got a reasonable start but, by the time I’d worked my way through the group I was in, the leading group had gone. I was on my own for the remainder of the race, so just focussed on being as consistent as I could. I’m not happy to miss out on points, but we know how important qualifying is to the result, and this is something we need to address next time out in Austin.”

Michael Bartholemy // Team Principal – “Firstly I want to say a massive thank you to Petronas Raceline Malaysia for loaning us a frame, without which Mika would not have been able to race after his qualifying crash yesterday. Tito did a fantastic job today. He could have panicked after getting pushed out in turn one, but he kept his head and brought it home for the win. Mika also rode a great race, bouncing back from his big qualifying crash yesterday and putting what was effectively a brand new bike on the podium. It was a great effort by the riders and the team this weekend and a great way to start the season. I know Livio is disappointed, but his result wasn’t unexpected given his qualifying position. His race pace was good, but qualifying is something we need to work on with him in Austin.”

MV Agusta gets more adventurous in 2022