Imola (Italy), Monday 12 May 2014 – The one-day official DWO test took place today at Imola’s Autodromo Enzo e Dino Ferrari in warm conditions under sunny skies. The eni FIM Superbike World Championship teams who decided to participate in today’s on-track activities had plenty of time available to start their preparation for the fifth round of the season, scheduled for May 25 at Donington Park, as well as to continue with the development of their respective bikes.

At the end of the six hours, split between two sessions, Jonathan Rea (Pata Honda World Superbike) topped the timesheets courtesy of a 1’47.225 lap time set in the afternoon, ahead of Chaz Davies (Ducati Superbike Team) and Toni Elias (Red Devils Aprilia), all three within 0.158s of each other. The quickest of the EVO riders was Niccolò Canepa (Althea Racing Team Ducati), clocking in 1’48.323. The Pata Honda squad worked on fine tuning the package that proved to be extremely competitive during the weekend with Jonathan Rea, while Leon Haslam significantly improved his lap times and narrowed the gap to his teammate.

After a difficult weekend, performance and results wise, the Voltcom Crescent Suzuki Team concentrated on evaluating new electronic strategies to sort out the engine braking issues that both Eugene Laverty and Alex Lowes experienced during the Italian weekend. Laverty also tried out new chassis setups, while Lowes tested a different swingarm with encouraging results and resultant lap-time improvements.

Chaz Davies, Davide Giugliano and the whole Ducati Superbike Team continued their effort on improving the overall setup for their 1199 Panigale R machines, following a race day at Imola of mixed fortunes for the two riders.

Works Aprilia rider Sylvain Guintoli evaluated new parts for his RSV4 Factory while teammate Marco Melandri put in a big number of laps to try and solve the problems encountered during his home event.

This test was also the chance to test the developmental compounds brought by Pirelli, the Official Tyre Supplier of the eni FIM Superbike World Championship. Two new front tyre solutions for both full-spec Superbikes and EVO machines, as well as two specifically developed rear compounds for each category, were made available to the teams. 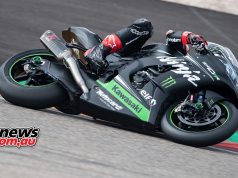 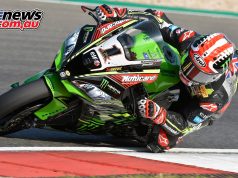 Can Jonathan Rea wrap up WorldSBK at Magny-Cours 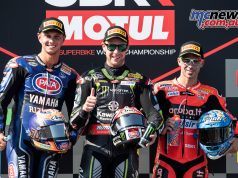