A passionate crowd welcomed ProMX back to the Maitland track in the Lower Hunter Valley region of NSW. A fast and technical track presented riders with contrasting terrain that encouraged close racing and intense battles throughout the day.

KTM veteran Brett Metcalfe rocketed out of the gate to claim the holeshot in the opening THOR MX1 Moto. A furious first lap would ensue, with all the major title contenders trading plastic and placings early in the opening turns. At the conclusion of the opening lap it was BBR 102 Motorsports rider Matt Moss who would continue his momentum from claiming the fastest qualifying time, taking the lead from Metcalfe.

Moss’ lead would be short lived, as KTM Australia’s Kirk Gibbs was next to mount an attack and claim the lead on the following lap. Moss was then shuffled back further by CDR Yamaha Monster Energy’s Aaron Tanti and Brett Metcalfe then also followed through.

A freight train of Gibbs, Tanti and Metcalfe proceeded to tick off laps in close proximity until the middle part of the Moto, when Red Plate holder Tanti pull the trigger first, passing Gibbs for the lead.

As Tanti began to sprint away and establish a strong track position, Matt Moss regrouped and first passed Metcalfe for 3rd and then Gibbs for 2nd. Gibbs fell late in the moto coming out of the split section, relegating him from the podium positions.

At the chequered flag, it was Tanti in 1st, Moss 2nd, Metcalfe 3rd, Todd Waters on the Husqvarna Australia in 4th and Kirk Gibbs in 5th.

HRC Honda Racing Australia’s Dean Ferris had a point to prove in Moto 2 after a mechanical issue saw him fade back to 7th in Moto 1.

After taking the holeshot at the gate drop of Moto 2, Brett Metcalfe was first to pass Ferris for the lead on the opening lap. Aaron Tanti was next to mount an attack 1 lap later, passing both Ferris and Metcalfe to move into 1st position with Matt Moss close in tow.

From here, the trio of Tanti, Moss and Ferris would never be separated by more than a few bike lengths around the Maitland race track.

With the afternoon sun low in the sky and a hard packed track, passing and time making positions were limited and the trio played a game of cat and mouse that stretched all the way to the chequered flag, where it was Tanti making it 1-1 Moto scores to take the overall, further stretching his points lead.

Matt Moss retained 2nd in the Moto and overall in a season best day for the past champion. A frustrated Ferris settled for 3rd in the final Moto, with Todd Waters riding to yet another consistent day with 4th position in Moto 2 good enough for 3rd overall for the day.

In the opening Pirelli MX2 Moto, it was Husqvarna Australia’s Dylan Wills who took the holeshot, with HRC Honda Racing Australia’s Wilson Todd and Empire Kawasaki’s Haruki Yokoyama following close behind in 2nd and 3rd respectively.

Wills set the pace early in the Moto, keeping Red Plate holder Todd a few bike lengths behind throughout the opening 10 minutes. At the same time, the Serco Yamaha duo of Bailey Malkiewicz and Jesse Dobson were battling for 5th position, with Dobson lighting up and moving through the field, first passing Yokoyama for 3rd and then capitalising on Dylan Wills misfortune, who then fell while fending off the attacks from Wilson Todd for the lead at the half way point of the Moto.

Todd was too strong and maintained solid track position and a modest lead over Dobson in 2nd to take the win. Haruki Yokoyama claiming 3rd after Dylan Wills and GAS GAS Australia’s Noah Ferguson came together before the final lap. Malkiewicz and Noah Ferguson rounded out the top 5 in Moto 1.

In what is becoming all to familiar, Todd executed another perfect holeshot to maintain lead track position through the opening turns in the second moto.

Behind Todd, a turn two pile up held up many of the heavy hitters in the class such as Yamalube Yamaha’s Rhys Budd, GAS GAS Australia’s Blake Fox and Yokoyama. This cleared room for Husqvarna mounted Kaleb Barham and Yamaha mounted Jayce Cosford to battle for podium positions through the half way point.

As Dylan Wills exited from podium contention with a mechanical issue, Jesse Dobson mounted an incredible charge through to 2nd with Empire Kawasaki’s Jai Constantinou riding to a season best 3rd position. 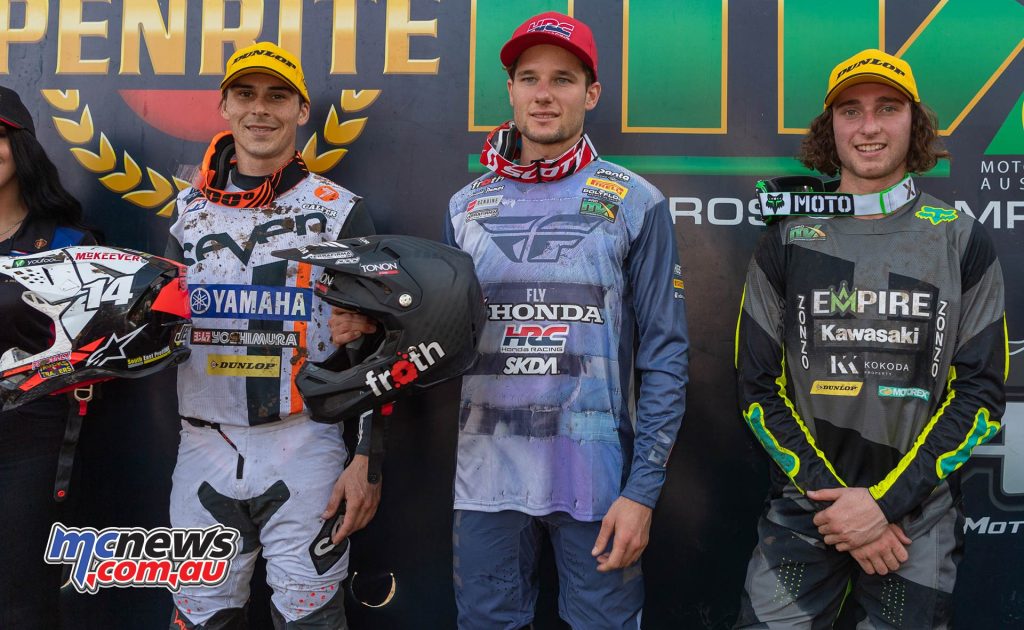 As Todd took the chequered flag in dominating fashion, Noah Ferguson retained 5th position to climb on to the overall podium in 3rd. Dobson 2nd overall and Wilson Todd in 1st.

MX3 Red Plate holder Cambell Williams on the HRC Honda Racing Australia machine took the holeshot in the opening moto, however it was short lived as hometown favourite Connor Towill on the KTM Newcastle machine rocketed past Williams on lap 1 and never looked back.  From there, Towill stretched out to an 8 second lead by the halfway point and managed the race from the front.

As the battle for 2nd heated up, Williams was shuffled down to 6th as lingering injuries held him back. KTM Australia’s Kayden Minear began his charge to the front from 9th position early as the Husqvarna Australia duo of Jack Mather and Brock Flynn battle for the podium spots along with Ride Red Honda’s Ty Kean.

Towill was too strong, taking a dominant Moto win. Ty Kean established a strong 2nd place and Kayden Minear made multiple passes in the closing laps to secure 3rd position at the chequered flag.

Moto 2 would see a repeat start from Williams who again launched out of the gate to the holeshot, but ultimately his race would end one turn later with what appeared to be a mechanical issue.

From there Towill took the lead as Minear manhandled his KTM Australia machine after losing both feet from the foot-pegs in the first jump section, yet somehow was able to remount without crashing. 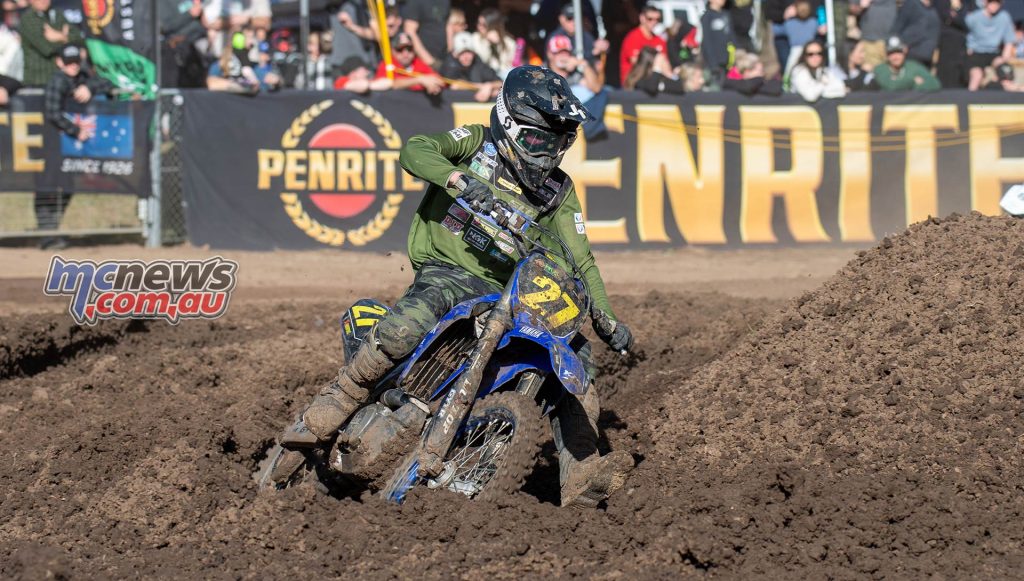 Towill led until just before the halfway mark, where a fall in the back split section handed the lead to Jack Mather. Yamaha Junior Racing’s Seth Burchell was in 2nd and Ty Kean in 3rd.

As the Moto progressed, Kean manoeuvred his way through to 1st position and never look back, going on to take the Moto win ahead of Burchell in 2nd and Mather in 3rd. The KTM duo of Towill and Minear battled furiously over 4th position to the chequered flag, with Towill just edging Minear at the finish.

The next generation of Australian Motocross talent put on a phenomenal display of skill and speed to wow the Maitland crowd in the Yamaha bLU cRU YZ65 Cup contests.

Young Heath Davy was in a league of his own all day, claiming both Moto wins in dominant fashion.

Deegan Fort and Darcy Huston also established themselves as the riders to beat for the podium spots throughout the two bouts.