Marc Marquez (Repsol Honda Team) threw down the gauntlet to his Championship rivals in the Czech GP, with the race declared wet but the track quickly drying at the start – conditions made for a tactical masterstroke for those willing to gamble. And that’s exactly what the number 93 pulled off. A second consecutive victory saw him grow his Championship lead, with teammate Dani Pedrosa (Repsol Honda Team) closing in on those above him in the standings with an impressive ride into second – taking his 150th podium.

“This was a very special Sunday because everyone was racing for Angel Nieto, but it was also a very challenging race. On the grid, I took the risk to use the soft rear tyre because I thought it would give me extra grip for five laps before pitting to change bikes, but it didn’t go like that. I soon started to struggle a lot and lost many positions. When I saw that, I decided to immediately get in and take the risk of the slicks. When I re-joined the race, honestly it was still too damp in some parts and I nearly crashed during the first lap out. When you go out for the flag-to-flag, it’s so difficult to get the feeling with the bike again, but I tried to quickly understand the grip. Honestly, today I took some risks but it was one of those days when you just have to do it. After pulling a great gap, I just tried to manage, to ride well, and to finish the race. I’m really very happy with the result. It’s a track I normally struggle at, one I worry about every year, and getting 25 points was very important. Thanks to the team for another great job! We did the correct strategy during the summer break, coming here to test, and we arrived here prepared. We’re improving step by step. The Championship is still very, very tight; we must be able to be fast in every condition.”

“This weekend we were competitive in all situations, yesterday in qualifying and today, with this podium. I’m really very happy with the performances and with how I felt on the bike. I’m generally feeling stronger than in the first part of the season. We must improve some details—today it was knowing the right lap to stop on, but we’ll learn from it. Normally, when it’s still a bit wet and you have to switch to slicks you must be super focused and super committed. This is usually a strong point for Marc, as he’s always very good in these conditions; we have to be able to keep the same concentration in the future because these details are very important. Anyway, thanks to the team and to Michelin for the amazing feeling I had on the bike. We lost five points to Marc on top but we recovered some on our other rivals. I think the strategy of the team to come test during the summer break was right, as it was good to have the bike setting, especially at this track. We also improved on some little details of the bike and now I feel more comfortable going into the second part of the season. Now we have to not focus too much on the Championship and just concentrate and perform well at every race.”

Maverick Viñales (Movistar Yamaha MotoGP) managed to stage an impressive charge back up through the field to complete the rostrum, limiting the damage caused by pitting later and keeping himself second in the standings.

“I’m really happy. Honestly, third was the best we could do today. Our target was to be on the podium and we did it. We were struggling during the whole weekend. Finishing third on a tough weekend is a good result. We have to be on the podium, this has to be the norm if we want to win the championship title. I came in a little bit late, I think, but at the same time as Dani Pedrosa and some other riders, so it was good for the overall result. The track was drying out really fast. It might have been better to stop a little bit earlier, but this is the first time I finish a flag-to-flag race on the podium, so it gives me a lot of experience. In Austria it’s going to be really important to have a good feeling and a good weekend, and winning on Sunday will also be really important. I think all the podiums today were dedicated to Ángel Nieto, because he was really important and one of the best.”

Today’s race results see Viñales hold second place in the standings, 14 points from first and eight-points ahead of Rossi, who holds fourth in the championship. Yamaha retains the lead in the Constructor’s rankings, by nine-points, while the Movistar Yamaha MotoGP Team currently lies in second place in the Team’s classification, five-points behind Repsol Honda.

“It is always difficult in these conditions in a flag-to-flag. It for sure isn’t our strongest point, this type of racing, but in the end the result is not so bad. We improved a lot from the last flag-to-flag and I finished fourth, but I think that before the end of my career we can defeat this flag-to-flag race situation! Anyway, I think that in a full dry or full wet race I can fight for the podium for sure. It remained a good weekend, because we worked well in the box. I felt good with the bike, that’s important, and I was strong on the wet and on the dry. The race was very hard, I pushed from the beginning to the end. It’s a shame that we could have taken more points and arrived on the podium, but it’s like this and in this condition fourth place is not so bad.”

With the field all on wets, Marquez got away in the lead at lights out, but a storming start for Jorge Lorenzo (Ducati Team) from fifth saw him then moving through for the lead on Lap 1. Andrea Dovizioso (Ducati Team) slotted into P3, with Valentino Rossi (Movistar Yamaha MotoGP) just besting Pedrosa to take fourth.

Lorenzo began to pull away with a good gap as Rossi swooped through on both Dovizioso and Marquez to take second, and a dry line was already appeari    ng. The number 93 was dropping through the field and then dived into the pits as the first to try the switch to slicks – struggling on the softer tyre and taking the gamble early. 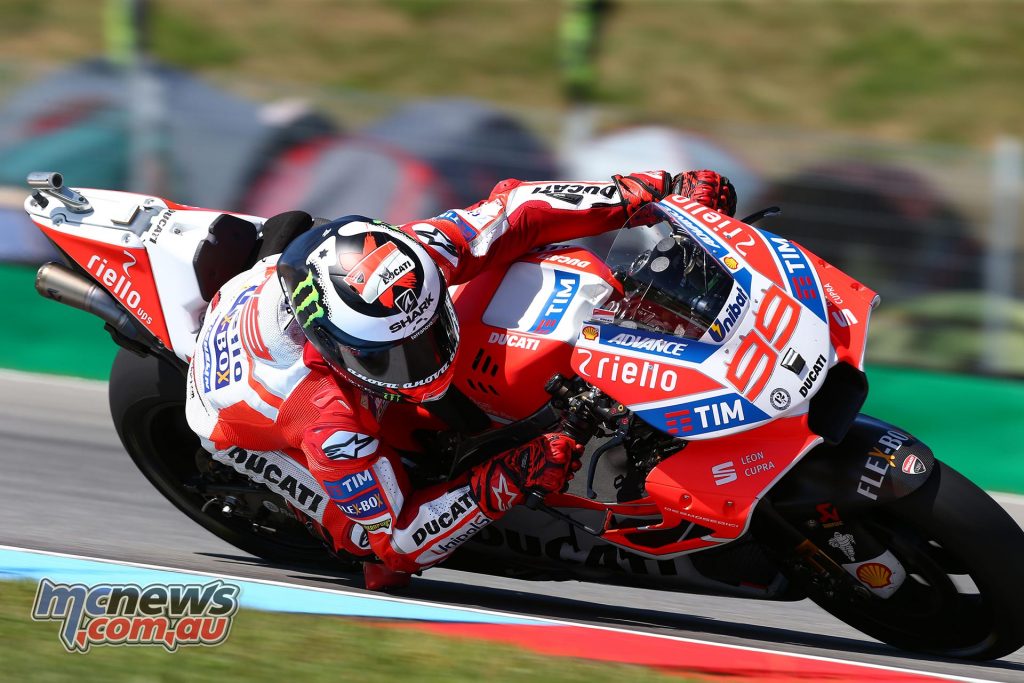 Rossi was hunting down Lorenzo as the track was drying and drying, before the ‘Spartan’ headed in – as did many of the front group. Meanwhile, Marquez was on a charge setting red sector after red sector back out on slicks, and it appeared he’d played his hand to perfection.

As the deck shuffled, he was soon taking the lead – and proving his decision to pit a tactical masterstroke as the dust settled and the gap back to P2 was around 20 seconds.

Meanwhile, Lorenzo was delayed in the pits as the riders around him – including Viñales – streamed out, with Rossi and Dovizioso steadfastly remaining out longer until both diving in together.

Viñales got the hammer down from the mid-pack as everyone shuffled back out on track, slowly starting to reel in those ahead of him. Picking them off one-by-one, the rider from Roses finally battled past Cal Crutchlow (LCR Honda), Danilo Petrucci (Octo Pramac Racing) and Aleix Espargaro (Aprilia Racing Team Gresini) to make it into some clear air, some six seconds off Pedrosa in second and the podium seeming decided. Pedrosa, meanwhile, ate a good number of seconds off Marquez’ lead, more than secure in P2. 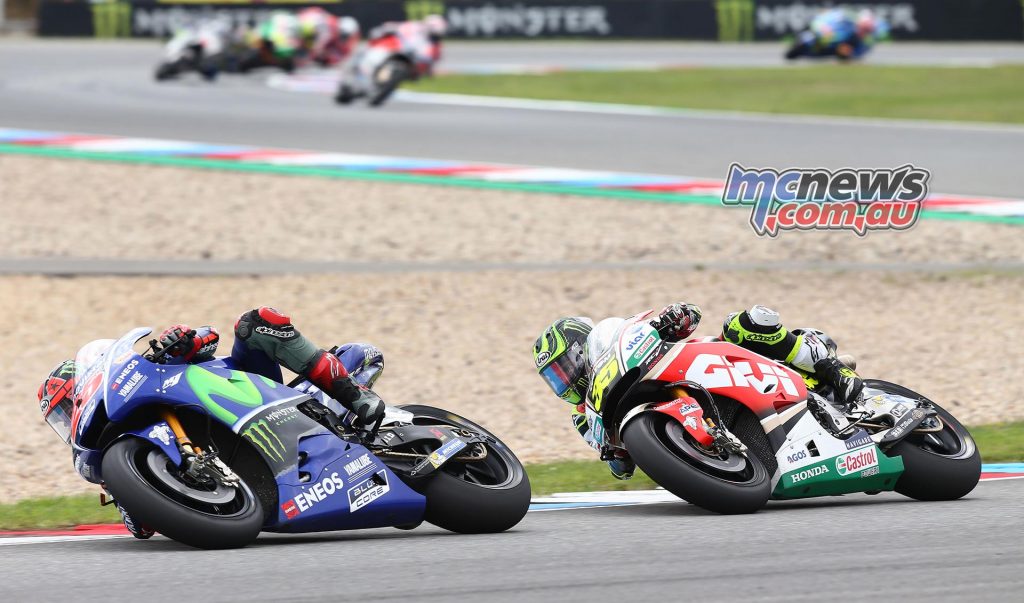 Slightly further back, Dovizioso had a simple mission: after both pitting late, the Italian needed to stay as close to compatriot Rossi as possible. Close on points in the Championship, ‘DesmoDovi’ managed some good damage limitation in managing to stay close enough, but Rossi kept the upper hand.

With Cal Crutchlow the last man in between the ‘Doctor’ and his teammate Viñales as they honed in on the top four, Rossi got his head down and pushed on – eventually catching the Brit and able to get past him on the final lap. Dovizioso followed the number 35 home and took P6, close but not quite able to shadow his compatriot over the line.

Petrucci took a solid result in seventh after losing grip in the latter stages, ahead of Aleix Espargaro after a penalty for an unsafe release in pit lane saw the Spaniard move back three places.

There was a rockstar performance in P9, with Pol Espargaro (Red Bull KTM Factory Racing) crossing the line only two tenths off his older brother, taking a stunning result in a tough race and bringing some good points home for the Austrian factory.

Jonas Folger (Monster Yamaha Tech 3) completed the top ten, with the German rookie slicing back through the field and escaping the clutches of fellow rookie Alex Rins. Folger had been well outside the points, and Rins’ result was the culmination of a promising weekend for the Spaniard as he comes back from injury – the second rookie home and ahead of Zarco, who was twelfth.

Karel Abraham (Pull&Bear Aspar Team) was running much further up for the initial stages until the pack shuffled around him, but the Czech rider nevertheless took solid points at home in P13.

Jack Miller had been one of the first to stop, switching to his second Honda RC213V as he quickly realised the conditions suited slick tyres. But Miller’s clever move, virtually in parallel with race winner Marc Márquez, did not pay off, with a slow pit stop and then rear grip issues not allowing the Australian to maximise his race strategy. Despite pushing through to ninth Miller struggled to keep the pace for a top ten finish and was frustrated not to be able to take full advantage of his early pit stop.  Miller eventually finished 14th and three spots ahead of teammate Tito Rabat, who also suffered with rear grip issues after his switch to slicks.

“I lost some valuable seconds in the pit stop waiting for my second bike to be ready but still thought I had a chance of a top ten position. But then I found we did not have similar rear grip compared to practice when I could easily do 1’57s on an old tyre but in the race I could not match those times. The front felt really good but I had no rear grip and could not take advantage of my strategy. I tried to ride a smart race but a series of unfortunate issues cost me valuable points today.”

Jorge Lorenzo, after leading early on, found his delay in the pit lane costly. The five-time World Champion put in a good comeback, however, moving through from outside the top twenty to complete the points in fifteenth – bridging some big gaps along the way.

The next stop on the calendar will be heartening for Lorenzo and the Ducati team, as MotoGP heads to Austria – a track that suits the ‘Desmosedici’ like no other. And despite Marquez’ domination at Brno, everything remains very much an open book – with Viñales, Rossi, Dovizioso and Pedrosa still in hot pursuit ahead of next weekend’s visit to the Red Bull Ring. 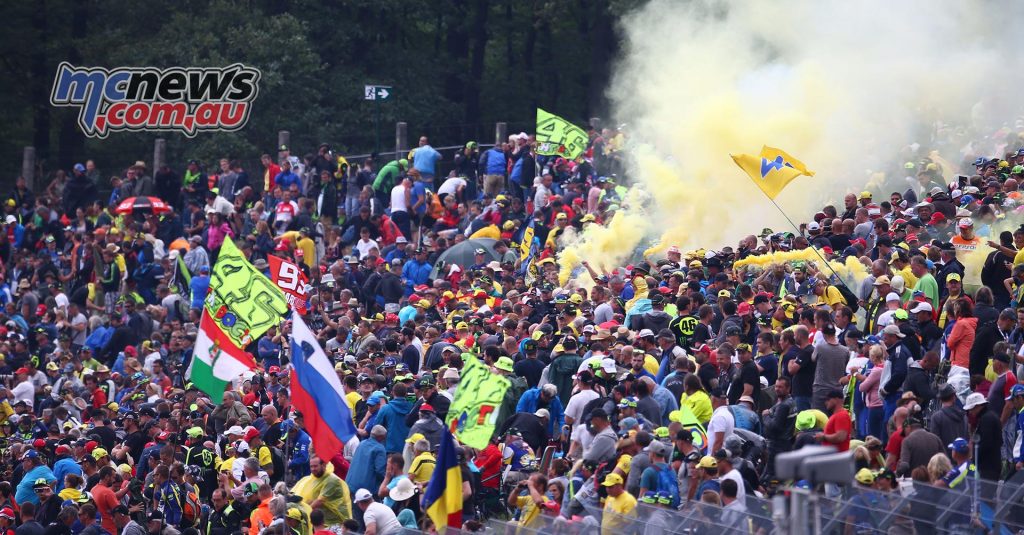