by Trev
in Enduro / Rally, Motorcycle Racing
A A
Share on FacebookShare on TwitterShare

win with a determined display of riding on day two of the Maxxis Enduro World Championship GP Acerbis of Chile. 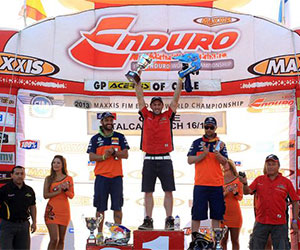 KTM’s Antoine MEO (F) fought his way back into contention to claim his second win of the weekend in the Enduro 1 class while France’s Christophe NAMBOTIN (KTM) improved on his previous day’s result to win the Enduro 3 category in Talca.

In the Enduro Junior class, Italy’s Giacomo REDONDI (KTM) secured victory as local favourite Benjamin HERRERA (TM) topped the standings in the Enduro Youth Cup. Australia’s Matt Phillips scored a third place finish to back up his fifth place on day one.

After setting the fastest E1 time on the opening enduro test, MEO slipped back down the running order as Italy’s Thomas OLDRATI (Husaberg) took control of the race lead. With both riders virtually tied on time entering the third and final extreme test, MEO delivered a stunningly fast time to claim his second victory of the weekend. “I started out quite strongly in the morning but then lost my way a little bit during the day,” confirmed MEO.

“On the last lap I gave it my maximum and by setting the fastest time in the last extreme test I managed to take the win.”

Looking incredibly strong throughout the day, OLDRATI was unable to fend off the late charge from MEO and was forced to settle for second position. Improving greatly on his day one result of seventh, 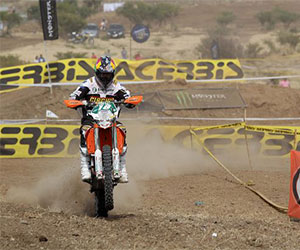 The Enduro 2 class saw a new winner emerge with Italy’s Alex SALVINI (Honda) claiming victory. The win, which was his first in the EWC since quitting motocross, came after a hard fought battle with Spain’s Ivan CERVANTES (KTM) and France’s Johnny AUBERT (KTM).

With little to separate the trio throughout the day, SALVINI topped the day’s final enduro test to claim a 14-second margin of victory. “I’m incredibly happy to win. It’s my first career

win in enduro,” told a delighted SALVINI. “I felt strong all day and was able to ride like I know I’m capable of. It’s been a great day.”

Jumping up two positions from his day one result of fourth, CERVANTES finished as a deserved runner-up to SALVINI. AUBERT claimed his second podium result of the weekend with third place.

In the Enduro 3 class, France’s Christophe NAMBOTIN (KTM) ended his day as the winner. Although struggling to find a comfortable rhythm on the dry and dust terrain, NAMBOTIN delivered some impressive performances. Topping five of the day’s nine special tests, the KTM rider secured a solid 18-second win. “Even though I’ve won it’s been a difficult day for me,” remarked NAMBOTIN. “I struggled to get a good feeling with the track and crashed more than I would have liked.”

Sweden’s Joakim LJUNGGREN (Husaberg) continued his run of good form to end his day as runner-up. Proving that he will be a strong contender in this year’s championship, France’s Rodrig THAIN (Gas Gas) bettered his day one result of fourth to secure a podium result with third position. Portugal’s Luis CORREIA (Beta) capped off a successful weekend in Chile to end the second day fourth with Italy’s Manuel MONNI (KTM) rounding out the top five. 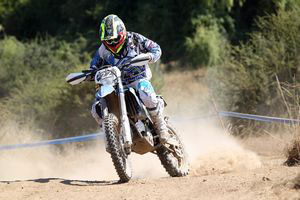 In the Enduro Junior class, Italy’s Giacomo REDONDI (KTM) repeated his winning result from day one. Spain’s Mario ROMAN (Husaberg) set a fast pace throughout the day and finished as runner-up to REDONDI. Making his debut in the EWC at the GP Acerbis of Chile, Australia’s Matthew PHILLIPS (Husqvarna) ended day two in third overall. France’s Loic LARRIEU (Husaberg) was fourth with Britain’s Daniel MCCANNEY (Gas Gas) ending his day in fifth.

The Maxxis FIM Enduro World Championship continues with the GP Maxxis of Argentina in San Juan on March 23/24. 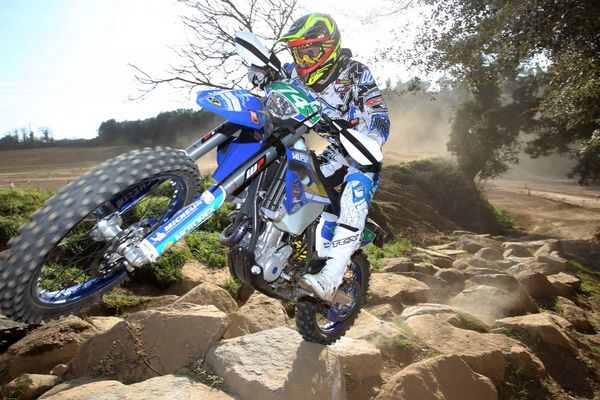 — Meo, Renet and Ljunggren win on day one at EWC GP of Chile – Matt Phillips Fifth

Dominated by dry and dusty conditions, the opening round of the 2013 FIM Maxxis Enduro World Championship got off to a spectacular start in Talca, Chile.
Of the world’s best enduro riders it was KTM’s Antoine Meo and Husaberg’s Pela Renet and Joakim Ljunggren that claimed victory in the Enduro 1, Enduro 2 and Enduro 3 classes. In the Enduro Junior category, Italy’s Giacomo Redondi (KTM) topped the standings’ while Benjamin Herrera (TM) gave Chile reason to celebrate by winning the Enduro Youth Cup class. 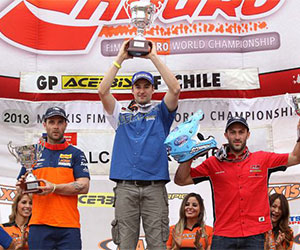 In the Enduro 1 class, defending champion Meo got his season off to a perfect start by securing victory on day one. Facing an early challenge from Finland’s Juha Salminen (Husqvarna), the KTM rider gradually extended his lead as the day progressed to take an eventual 28-second margin of victory.

“I’m really happy to win day one in Chile,” commented Meo. “I just tried to ride smooth and make no mistakes. In the end it all worked out for me to win.”

Although providing an early challenge to Meo, Salminen was unable to maintain his fast pace as the day progressed and had to settle for the runner-up position. Following a costly crash on the opening extreme test, Finland’s Matti Seistola (Husqvarna) battled hard all day to recover from his mistake and ended the day in third.

In the Enduro 2 class, Renet held off KTM’s Johnny Aubert to take the win. With Aubert winning each of the day’s three cross tests, Renet fought back by setting impressive times in the enduro test to secure a four-second win.

“It was a tough fight all day with Aubert,” remarked Renet. “He was quicker than me in the cross test but I was able to find some good lines in the enduro test to take the win.”

Narrowly missing out on the first victory of the season, Aubert was forced to settle for second. By setting the fastest time in the day’s final extreme test Italy’s Alex Salvini (Honda) finished on the third step of the podium. Engaged in a daylong battle with Spain’s Ivan Cervantes (KTM), Salvini capitalised on a mistake by the Spaniard to finish third. 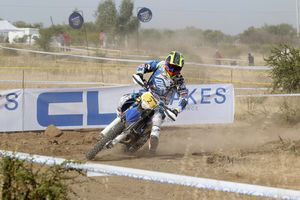 Taking his first race win since the snow covered GP of Sweden in 2009, Husaberg’s Joakim Ljunggren won the Enduro 3 category. Feeling comfortable in the dry and dusty terrain, the Swede topped three of the day’s ten special tests to secure victory.

“I’m so happy to have won,” told Ljunggren following the podium celebrations. “After a couple of difficult races in the SuperEnduro series, I’m delighted to have started the EWC so strongly by winning.”

Although claiming four special test wins, France’s Christophe Nambotin (KTM) was hampered by numerous crashes and had to be content with second position. Ending his day over 40 seconds behind Nambotin, Estonia’s Aigar Leok (TM) completed the podium with third place. 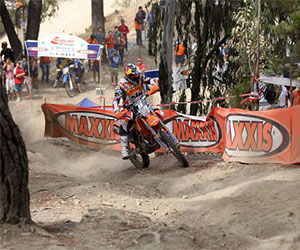 In the Enduro Junior class, it was the 2012 Enduro Youth Cup champion Redondi that took the win. Britain’s Danny McCanney (Gas Gas) finished as runner-up to Redondi with Sweden’s Robert Kvarnstrom (Beta) ending his day in third.

Phillips – “Day 1 was ok. Started off good but struggled to get traction in the dust later on. No rear brake for 3 tests after hitting the trees. All good. Organizers moved me 5 minutes ahead on schedule hopefully not so many slow riders and dust tomorrow. 5th today.”

The EWC GP Acerbis of Chile continues with day two on Sunday, March 17.