Rossi and Vinales wow their fans in the Phillipines

After a quick visit to Indonesia at the end of January, Valentino Rossi and Maverick Viñales have been back on tour in Asia on their way to Thailand for second official IRTA 2018 pre-season test.

En route they paid a visit to the Philippines to say hello to their fans at the ‘Time2Rev’ event, and met up with the local media and Yamaha dealers at Yamaha Motor Philippines Inc. (YMPH)‘s 2018 Dealer Conference. 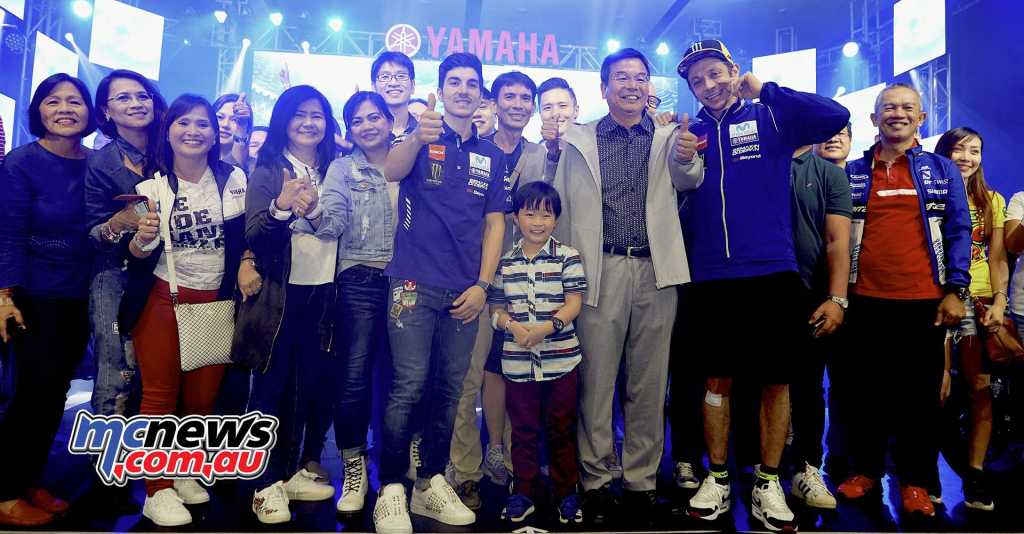 “Like every year, before the tests, we do this Asian tour and it is the second time that I went to Manila. It’s always nice to go there because their passion for motorcycles is really incredible. It was a very busy day, there were so many fans of mine and of Yamaha and it’s always nice to meet them. Now we focus on the test, because tomorrow we will be on track and it will be a new circuit for everyone. The test in Sepang was positive and now I want to start work in Thailand to improve our M1 again!” 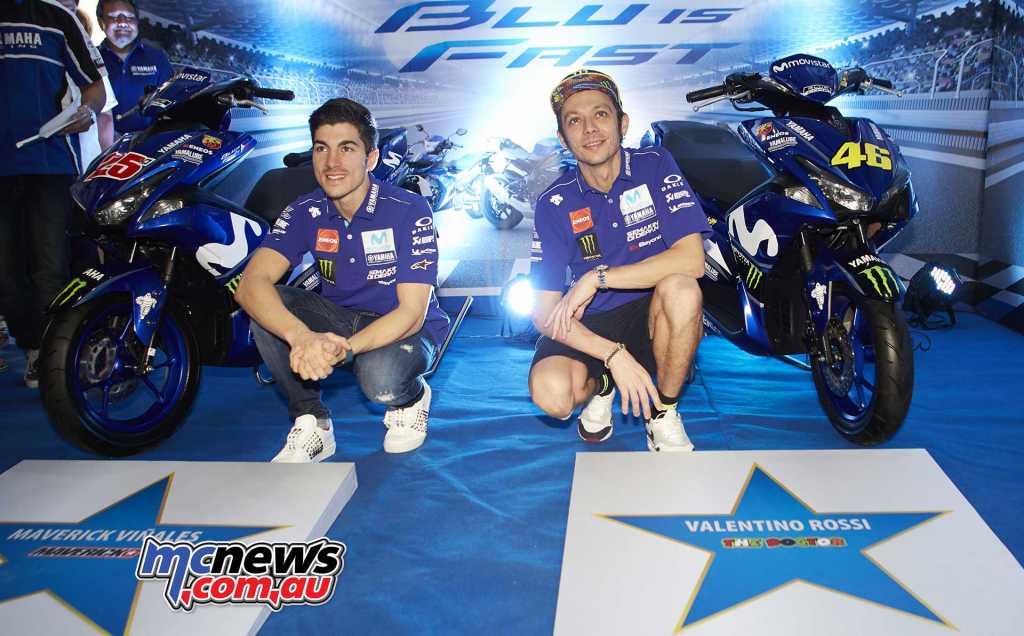 The teammates had a busy day ahead of them. They had to get up early and were soon joined by YMPH President Mr. Toru Osugi and YMPH Sales and Marketing Director Akihiro Maruo, as well as Yamaha Motor Racing President and General Manager of Motorsports Development Division, Kouichi Tsuji and Yamaha Motor Racing Managing Director Lin Jarvis, to use the Manila Light Rail Transit System (LRT) to ride LRT line 1 from Roosevelt Station to the newly opened Yamaha Monumento Station.

“I really enjoyed the event yesterday in the Philippines, it was incredible how many people attended the event in Manila. I keep saying it, but I didn’t expect to receive such a warm welcome. The venue was really nice and the crowds there are always very friendly and passionate about MotoGP, this gives me extra motivation to do them proud on the new track. I want to thank Yamaha Motor Philippines for organising this event and for the kindness with which they have treated us. I will now focus on the test in Buriram, because I’m impatient to ride my M1 at this new circuit.”

Having arrived at their destination after a smooth and quick journey, Rossi and Viñales acquired their own personal ‘beep cards’ for a quick demonstration of the gates at the entrance of the Yamaha Monumento Station. It was then time for a Q&A with YMPH‘s VIPs and guests, who all live and breathe racing, and were full of questions for their heroes.

Subsequently, Rossi and Viñales‘ celebrity status in the Philippines was underlined with the ceremonial unveiling of their personal ‘Walk of Fame’-inspired name plaques, inserted in the floor of the station.

“We had a very nice stay in the Philippines and had the pleasure of attending some very special but also ‘intimate’ events, where we were able to meet the local fans, media, and dealers in a casual manner. We highly value their enthusiasm for racing and want all those who support us to feel connected to Yamaha in some way. The Philippine flag and Yamaha Motor Philippines‘ slogan ‘Blu is Fast’ featuring on Valentino and Maverick‘s YZR-M1s in 2017, has made the Philippine fans feel connected to their heroes, and this visit to Manila again made them grow closer to the Movistar Yamaha MotoGP Team. We aim to continue to build a strong relationship with the Asian market in 2018, both with the Yamaha dealers and the fans, and look forward to making our supporters proud during the upcoming MotoGP season.” 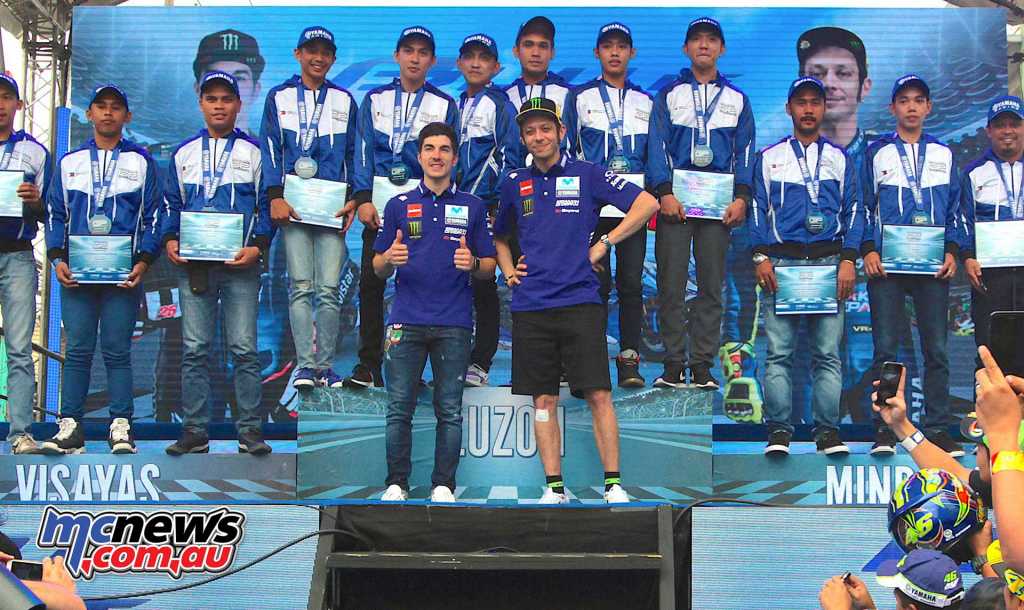 After a quick photo opportunity, the group moved on to 10th Avenue, located in the Caloocan City area, to join the hustle and bustle of this ‘motorcycle business capital’. The busy main street – filled with shops that offer parts and accessories for motorcycles – was turned into a big Yamaha venue, with various promotional activities. Rossi and Viñales had a quick look at the various Yamaha bike models on display at the ‘Time2Rev’ event, before they were asked on stage to give a short speech and show their support for the local Yamaha racers by handing out certificates.

After posing with the winners of the Yclub Gallery, the Movistar Yamaha MotoGP men headed straight to the Dealer Conference, held at the Seda Vertis North Hotel in the Quezon City Area, where the media and a big group of Yamaha dealers and distributors had assembled for another Q&A and photo opportunity. Warmly greeted as they entered the stage, the riders stayed for a while to help present the MIO models, a youthful and trendy bike range for millennials that aims to make them “unstoppable”.

Rossi and Viñales ended the day with some one-on-one interviews with the local media, before they headed to the airport. 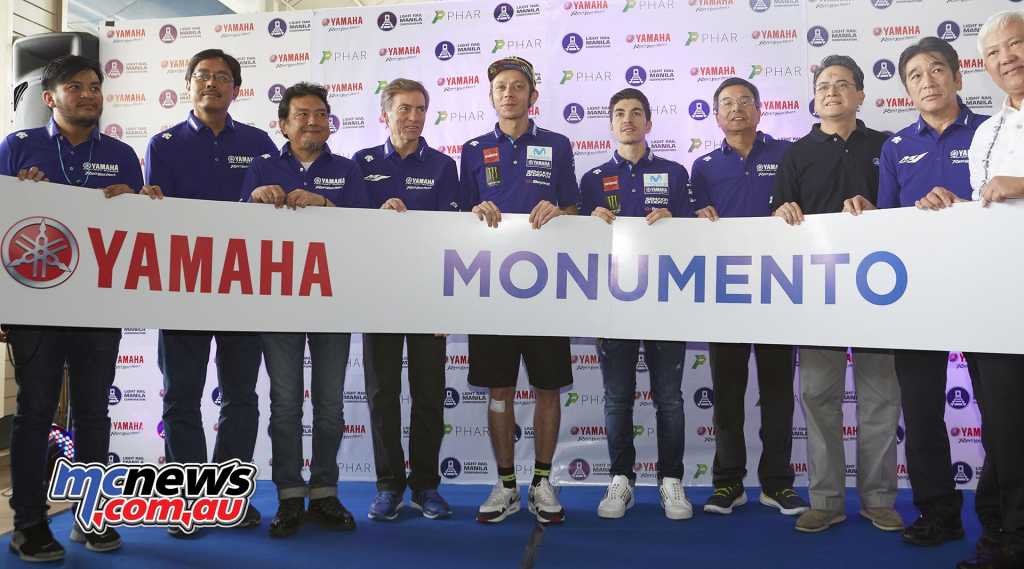