Motorcycle road race legends Kevin Schwantz, Freddie Spencer and Jeremy McWilliams are in Sydney this week for the Barry Sheene Festival of Speed at Sydney Motorsports Park. The trio dropped into the offices of Ride Rage Radio earlier this week for a chat with RRR presenters Phil Harlum and Tim Graham.  This interview with Kevin Schwantz was conducted in March, 2016, ahead of the Barry Sheene Festival of Speed.

Phil: For the second time ever in the history of Ride rage, we are joined live in the studio by a world moto GP/500cc world champion, Kevin Schwantz, the 1993 world 500cc champion. First of all welcome to the show, welcome back to Australia and it’s great that you are going to be participating at the Barry Sheene Festival Of Speed on the weekend.

Kevin: Thanks A lot guys, it’s great to be here and as always I thoroughly enjoy my time in Australia, so much so that it’s sometimes difficult to get me to get on a plane to go home.

Tim: And that 17 hour flight doesn’t help does it?

Kevin: It doesn’t, it’s sure a whole lot easier to stay here.

Phil: I did see that post you put on instagram saying here goes the long flight to Australia, you came via New Zealand

Kevin: Yeah I spent a few hours in Auckland  before I came here. I got a picture out the window before I landed, but I’m happy to be here. I got over the jet lag pretty well. Made the first day out not too late that first night and you know I feel great.

Phil: Probably the best thing about this weekend is that you’re not here just to press the flesh, shake a few hands and sign a few autographs, but you’re actually going to throwing a leg over a bike this weekend, not only in the GP legends clash…and Peter tried to tell us that it’s not a race…have you told these guys that….. but you’re also going to be racing in the top 50 as well on some pretty handy machinery, that’s probably one of the best things of the weekend.

Kevin: Yeah I’m going to get to ride the XR69 that Rob Phillis normally rides. And I’m really looking forward to that. It’s a bike that I never got to race when I was racing, it was a little before my time. I’m also going to ride a Macintosh Manx in another class and do the parade/this isn’t really a race….. on the grand prix bike. It’ll be interesting to see how that works out. But I’m looking forward to meeting the fans and shake a few hands, take photos and you know always an opportunity to twist the throttle I’ll come anywhere for.

Phil: And that bike your riding is the 1995 or 1994 championship bike that you road in GP?

Kevin: I think it’s a mix of kind of the 94/95 bike, neither of the years of which I won the championship, but I rode it in Jerez last year for an event that was there and you know it seemed to know it’s way around Jerez well, so I’m hoping it is the same here at Eastern creek.

Phil; You wouldn’t have ridden it here until the last grand prix here in 95 or 96?

Kevin: My last GP here was in 95. And in Sunday morning warm up five5 laps of running in and I started to twist the throttle on a little bit more on lap six off into the first turn and it seized and threw me off. I almost retired from racing at that moment. But the Australian fans all in the stands cheered me on. So I got up, ran back and got on my spare bike and went out and finished I think 4th in the grand prix. The Grand Prix’s in Australia don’t have a lot of fond memories, not at the Island, not really at the Creek, but I did win one in 93 which is the important one.

Phil: What was it do you think with the way that you rode that made you universally loved everywhere around the world. You could tell that you were always giving it 100% per cent. Because I know that wherever you go in the world, you’re one of the most popular guys ever from GP history……. And in fact there’s one guy who has won a few championships  that sort of modelled himself on you.

Kevin: I like that the fans can tell when you’re giving it 100 per cent every lap and every corner and that’s what I did and when the focus wasn’t there anymore, I packed it up and let some of the younger guys do it. But I gave everything every lap I raced. I try and make myself not do that now, but there’s still that temptation when you buckle that helmet up and fasten that chin strap, I want to be going faster than anyone else out there. It was a great living and it was great fun and I’m still reaping the benefits of it right now and it’s great to be here.

Phil: And the other thing that’s obviously quite noticeable, is that you are keeping pretty fit like you did in the old days. Where do you find the motivation now that you don’t have a full time ride? Is it that you just feel go in yourself and that you find that when opportunities like this come up you’re ready for it?

Kevin:  You don’t really know what’s coming up for sure, you need to keep yourself prepared all the time. Funnily enough I find the less I do the more the body starts to ache and hurt. So cycling, running and riding my dirtbikes is still what I enjoy. I just got back from Utah riding with another buddy, it’s all fun still and to be able to still do it at the level I still do it at is enjoyable.

Phil: I gotta say it’s great to see you here in Australia I can’t wait to see you strap on a helmet and unfortunately you probably will have to come and join Bracksy and I up in the commentary box as well.

Phil: I must say it’s been great having you in the studio and I can’t wait to see you in action on the weekend and it’s been a sensation for the three of us anyway.

Kevin: Wouldn’t miss it for the world and make sure that everyone comes out to the Barry Sheene Festival of speed this weekend.

This interview was conducted in March, 2016, ahead of the Barry Sheene Festival of Speed. 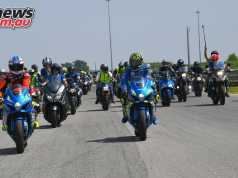 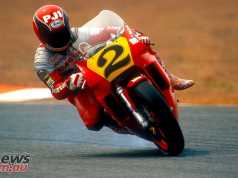